To help achieve energy-neutrality across all of its operations, the Infrastructure Division of ÖBB, Austria’s national rail operator, has used Esri’s geographic information systems to map out its solar potential.

Public transport operators face a number of challenges—how to continuously increase ridership, to not only solve urban and inter-city congestion, but also to help relieve greenhouse gas emissions from the transportation sector. As one European Transport Minister stated: “Rail is the answer to many critical issues in the area of mobility, such as climate neutrality, energy efficiency, crisis resilience and safety.”

Main parts have already been electrified for decades—trams have been powered electrically for quite some time and in the rail sector many countries have moved away from diesel on their regional as well as their mainline networks. While much of European rail already runs on electric power, the source of that electricity is equally important. For example, if hydrocarbons are consumed to create the electricity to power it, by burning oil, gas or coal, the environmental impact is only shifted geographically, not reduced.

ÖBB is not only breaking new ground, but also aims to be a pioneer in how a company can become fully sustainable. ÖBB is starting with an already enviable record: an average of 100 percent of the energy needed to power the trains already comes from hydro-electric and other renewable energy sources, making ÖBB one of the most environmental-friendly transport companies in Europe.

ÖBB wants to achieve complete climate neutrality in all areas. This is a major undertaking for a company with a current total energy demand of 3.0 TW/h in the mobility sector, a property portfolio of around 5,500 buildings of all types, and the intention to increase the number of trains and train kilometers by 30 percent after 2025. 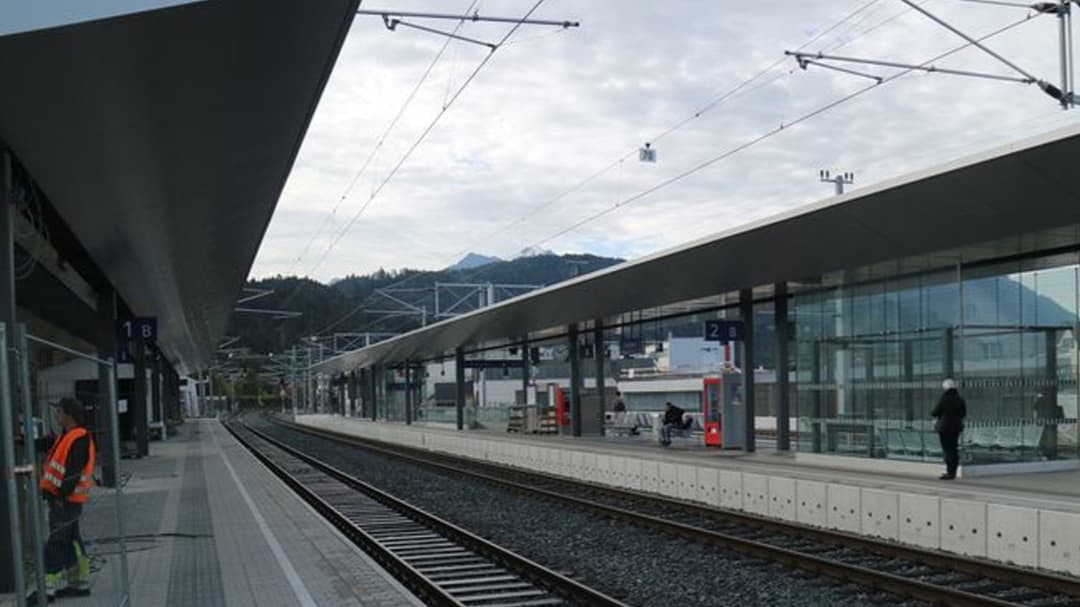 Nevertheless, important milestones have already been achieved. For example, ÖBB has been energy-neutral in terms of electrically powered trains since the beginning of 2018, and all buildings and infrastructure have already been electrically powered 100% from renewable sources since 2019. The longer-term goal for the company’s division is to be climate-neutral by 2030, followed by the entire company by 2050.

ÖBB is the only national railway company to have its own electricity supply network with a total of 10 hydroelectric power plants, seven transformer stations and a 2,000 km traction current network and positions itself as an environmentally conscious energy supplier for railway transport companies and infrastructure operators.

The company’s own hydropower plants cover around 35% of the electricity demand, with a further 25% coming from partner hydropower plants. The remaining demand is obtained from the public grid.

According to ÖBB, all possible technological solutions are being considered as part of the efforts to achieve climate neutrality. They have implemented a whole range of efficiency improvement programs to reduce overall demand, mainly concerning the mobility sector as well as the building and infrastructure sector. In addition, ÖBB has recently tested a hydrogen fuel cell train for operation on the Austrian railway network. Modern trains and rail vehicles use regenerative brakes to save energy as well.

Hydro and wind power will both play a role, but a big step forward will be realizing the organization’s solar potential. A national rail network covers a considerable amount of land, and in cooperation with SynerGIS (SynerGIS Informationssysteme GmbH), Esri’s official distributor in Austria, ÖBB-Infrastruktur AG has used geographic information systems (GIS) to calculate its own solar potential. 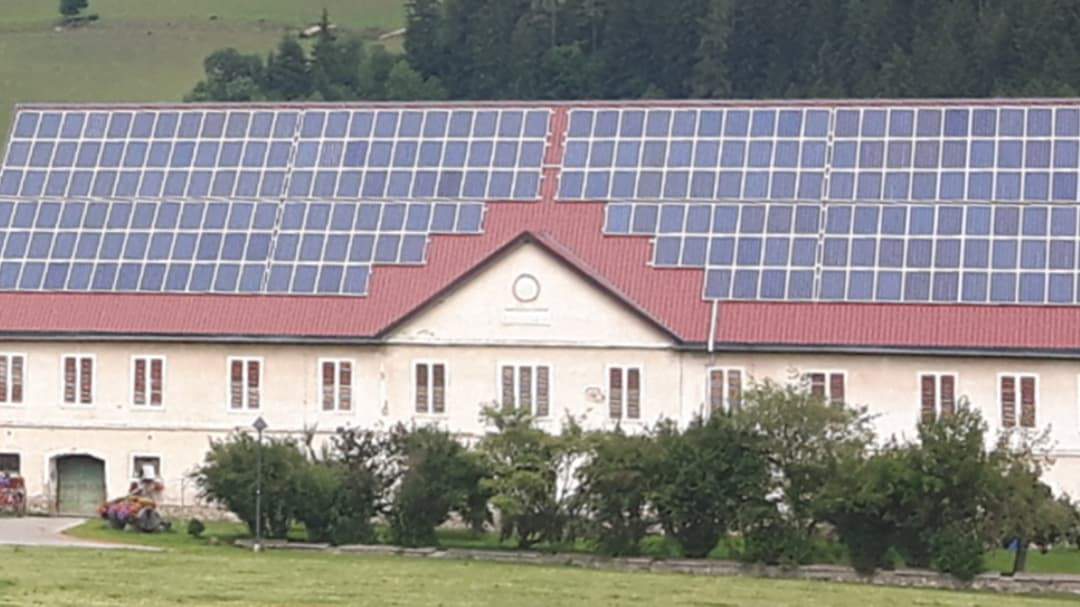 “GIS was the key to create a ‘solar map’ in a simple and efficient way,” said Markus Lebner, responsible department head at ÖBB-Infrastruktur AG. “With Esri's software, we were also able to use our GIS environment to survey the solar potential and create an important basis for the expansion of photovoltaic systems on our properties."

GIS has been the key to produce, simply and efficiently, a ‘solar map.’ Data from the ÖBB relating to its buildings, platform roofs and open spaces was brought together with that from other federal agencies by SynerGIS. In total, the map consists of 2,800 buildings (only roof areas of 100m2 or greater were considered), 600 platform roofs and 3,000 open areas.

The core data and functionality of the GIS system—surface and elevation models, as well as data about the buildings—were used to determine the theoretically and practically usable potentials. There are differences between these two. For example, some buildings and structures are not able to accommodate solar panels; some historical buildings are subject to preservation and other orders, which prohibit changes to their external appearance. Other buildings, whether due to new construction or inventory clearance, will change or no longer exist. 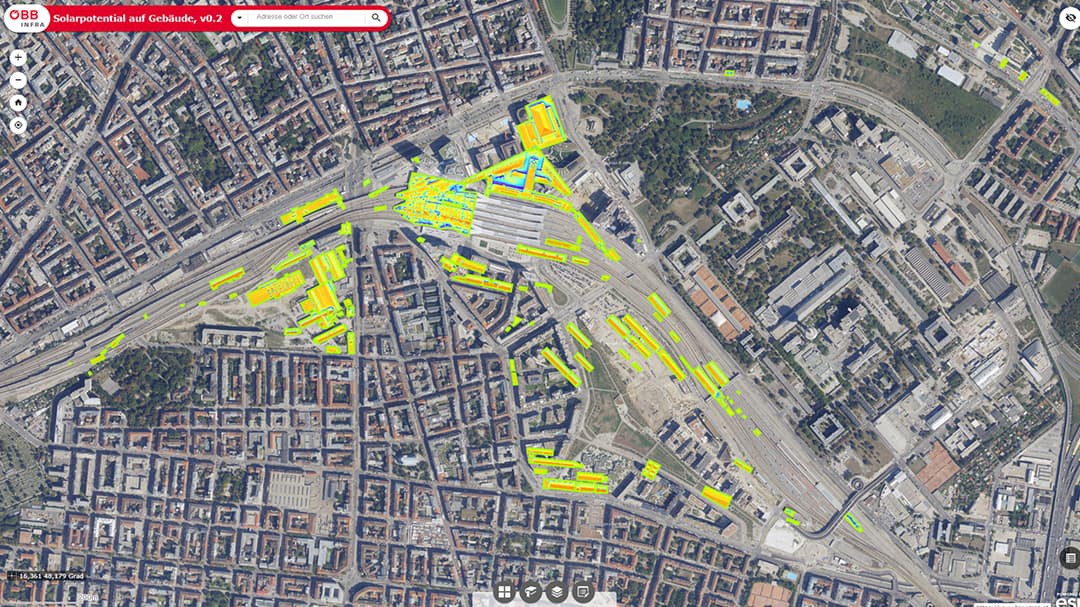 Simply calculating the area is not the only indicator of actual performance. The direction in which a roof or surface is oriented determines the solar potential over the year. In the case of noise barriers, for example, the orientation dictates whether or on which side solar panels can be mounted to achieve economically viable solar radiation and energy potential. Esri’s software has also been used to calculate how best to locate solar panels within a given area to achieve the best results. 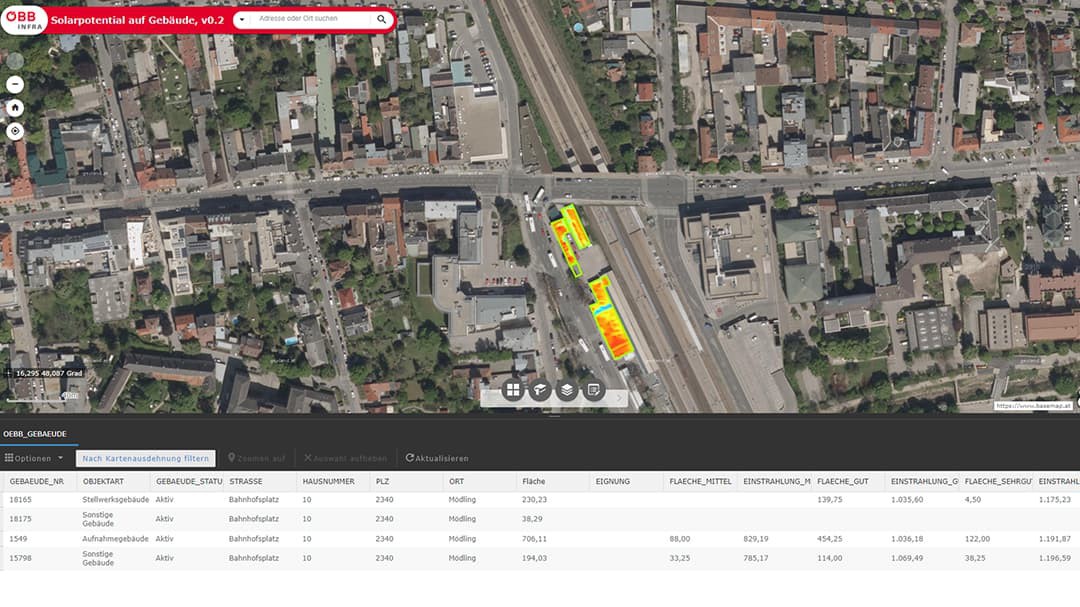 The mission statement of the Federal Ministry for Climate Protection, Environment, Energy, Mobility, Innovation and Technology, which is responsible for ÖBB, succinctly summarizes its environmental mission: “Creating and developing an intelligent and efficient infrastructure; designing and promoting innovative initiatives.” Together with ÖBB’s already successful energy policy and the benefits of public transport, ÖBB avoids around 3.5 million tons of carbon dioxide annually through rail transport.

To continue this path, ÖBB has a policy of building solar systems wherever possible. The largest plant built so far has a nominal power of 1.0 MW peak and the smallest 5 kW peak. ÖBB’s expansion plans only extend to generate sufficient capacity for its own needs, as anything beyond this would be uneconomical due to the current framework conditions.

The initial focus is on identifying the sites with the highest economic power generation potential. The roll-out of the construction program started in early 2020, and by early 2021, a total of 16 photovoltaic systems with a capacity of 1.3 MW peak have been installed, notwithstanding the pandemic restrictions. In the period from 2021 to 2030, the program will be accelerated to achieve the overall goals and targets.

The EU has marked 2021 as the European Year of Rail. Recognizing rail as one of the most sustainable forms of passenger and freight transport, the EU together with the International Union of Railways have joined together to not only further harmonize European railways, but also to promote the environmental advantages of rail transport. As the European Union’s Commissioner for Transport, Adina Vălean stated:

“Railways have a strong history of supporting industrial and technological revolutions. As we seek to transition towards a digital, carbon-neutral society, we are counting on railways to, once again, play a key role. Railways are unquestionably part of the solution to many of the societal problems we face today—climate change, air pollution, congestion, accessibility.”

Taken together, these initiatives are designed to lead ÖBB to an environmentally-friendly infrastructure, “which will enable our children and grandchildren to have a future worth living tomorrow.” In this respect, ÖBB is already at forefront.