Several factors, both large and small, impact the opportunities for people to improve their quality of life. Reliable, affordable transportation is often critical in accessing educational opportunities, jobs, and housing to enhance economic and social mobility. The US Department of Transportation recognized the importance of transportation stating:

"Equitable and safe access to transportation is a civil right. Transportation touches every part of American lives and makes the American Dream possible, getting people and goods to where they need to be, directly and indirectly creating good-paying jobs and helping improve quality of life, especially after the COVID-19 pandemic."

The Muni Service Equity Strategy outlines transit service investments as part of the regular biannual budget process. Improvements are detailed on a route-by-route basis to target a variety of service performance metrics within areas chosen based on specific socioeconomic demographic data. 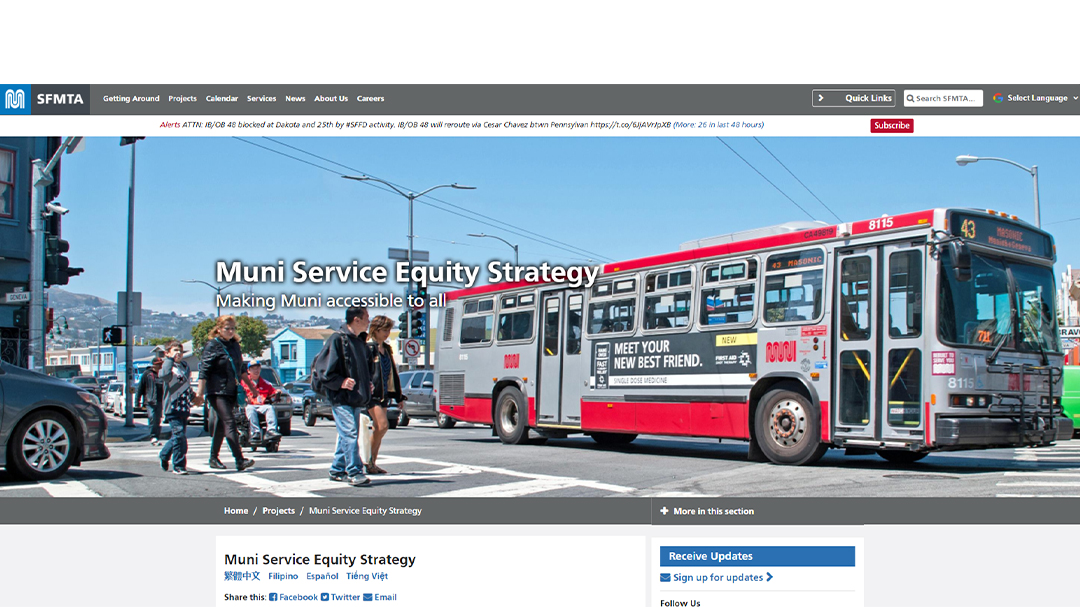 The ''SFMTA Equity Toolkit was developed as part of the Muni Service Equity Strategy so that service planners can make better-informed decisions for future Muni service plans. Supported by Esri's GIS solutions, the SFMTA Equity Toolkit uses data layered with mapping to improve access to jobs and key destinations by identifying gaps in the Muni system and enabling transit planning staff to make service change decisions to fill those gaps. Without these tools, it can be challenging for transit professionals to make focused transit service improvements that increase transportation equity and benefit those who use public transportation the most. 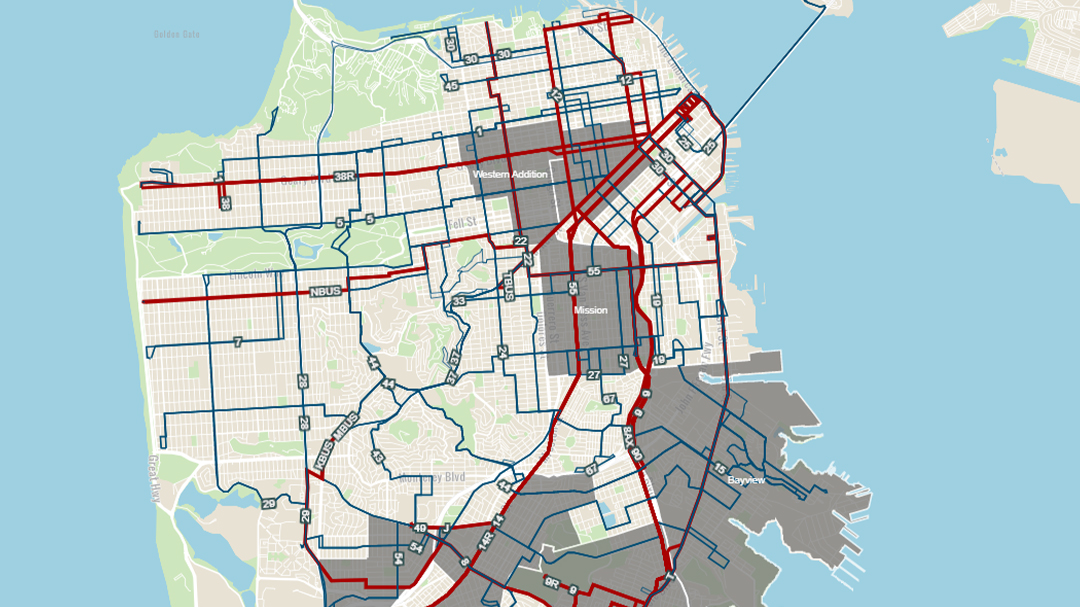 Equity Neighborhoods are those for which equitable transit is most important, where populations rely more heavily on public transportation. The emphasis on equity is deliberate and crucial,—It is centered on uplifting communities and delivering systemic change. "Using the power of data and mapping tools to visualize transit impacts allows us to work at dismantling the systemic barriers that harm communities. Transit systems that prioritize equity can help communities thrive," says Steph Nelson, SFMTA GIS developer and administrator.

The SFMTA Equity Toolkit uses transit service data from six regional transit agencies—SFMTA, BART, SamTrans, AC Transit, Golden Gate Transit, and Caltrain. The data includes routes, schedules, and frequencies. Using Esri's ArcGIS Network Analyst, the SFMTA Equity Toolkit shows how far a customer can get within 30, 45, and 60 minutes by transit from key Equity Neighborhood locations. It compares job access for transit riders before and during the pandemic and how service changes influence access; it also reveals gaps in service for Equity Neighborhoods.

The Equity Toolkit has its roots in the SFMTA's goal of equitably serving all residents of San Francisco as well as aligning with racial justice movements around the country.

Tracey Lin, senior transportation planner at SFMTA, says: "San Francisco went into lockdown in March 2020. We cut service significantly, from over 70 to 17 transit routes. Decision-making had to be very rapid and emphasized protecting essential workers, frontline staff, and the city we serve. Luckily, we had the Equity Strategy, which identified transit-dependent neighborhoods. We prioritized services on what are known as Equity Routes—Muni lines that serve Equity Neighborhoods—where residents also comprise a large percentage of the city's essential workers."

The availability (or lack) of data also imposed some limitations. Nevertheless, some significant pointers emerged from the toolkit team's research, as Nelson explains: "The original vision was to see how transportation service changes would enable residents' access to ladders of opportunity—key resources that enable people to move out of poverty and into a better quality of life. 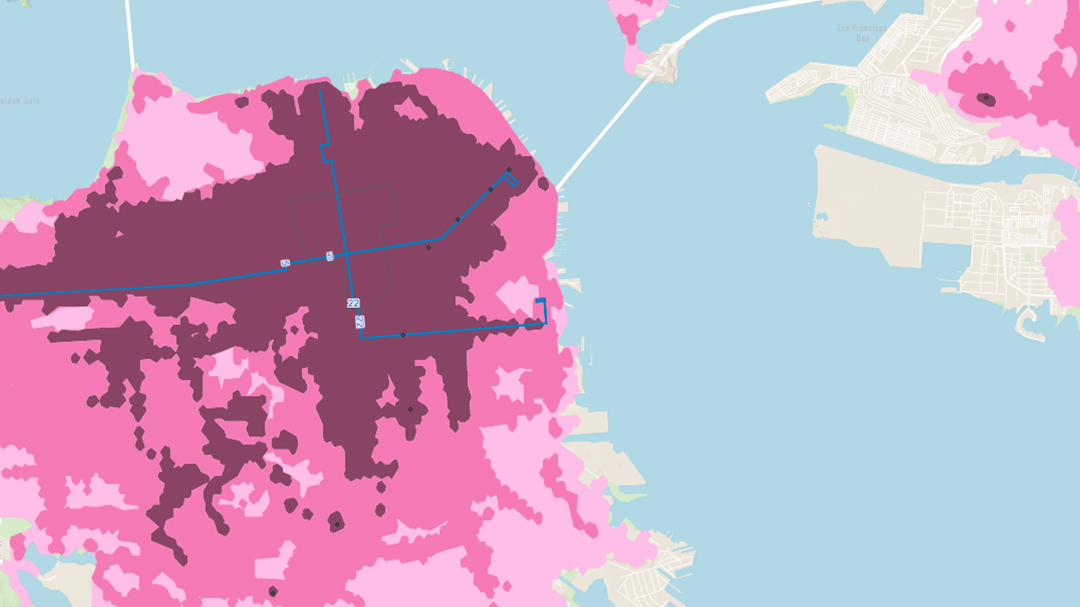 "Initially, we applied the 'ladder of opportunity' framework to our analysis, pulling from some recent policy link reports. We were interested in looking at access to medium- and high-opportunity jobs, and we developed an extensive industry/occupation crosswalk table to translate the policy report findings to San Francisco job data. We ran into a few issues with that, however. Once we moved to regional network analysis, we needed to work with regional job data, and the readily available census data we have access to is provided at the two-digit NAICS code level, rather than the six-digit level, which is necessary for the crosswalk table to work.

"The second and equally important issue is that available reports did not include a gender perspective, and the majority of jobs flagged as 'low opportunity'—also known as 'pink collar jobs'—are occupations that have historically been more accessible to women (some more transinclusive than others). While it may be true that 'medium- and high-opportunity jobs' as defined in the policy papers we reviewed provide a more promising path toward financial security, many of these occupations are historically dominated by cisgendered men and largely inaccessible to other genders due to socialization patterns and unsafe work environments. While providing women (trans-inclusive) and nonbinary individuals with increased access to male-dominated occupations is a critical component to removing systemic barriers facing our Equity Neighborhoods and beyond, systematically excluding pink-collar jobs would undermine our overarching goals. So, we kept all jobs in essential industries in the mix. We'll be adding the rest in our next phase."

Defining users and their needs

Census data was used to identify the Equity Neighborhoods, including the concentration of low-income households, residents who identify with a race other than white, and affordable housing developments. "A unique feature of the San Francisco area," says Lin, "is the relatively high levels of car ownership in economically challenged households. Planners sometimes focus on areas with low car ownership rates, as these groups are assumed to rely more heavily on transit. But in San Francisco, this line of thinking does not always work. Limited access to public transportation has often been a factor driving high levels of car ownership and underscores the importance of a strong public transit system." 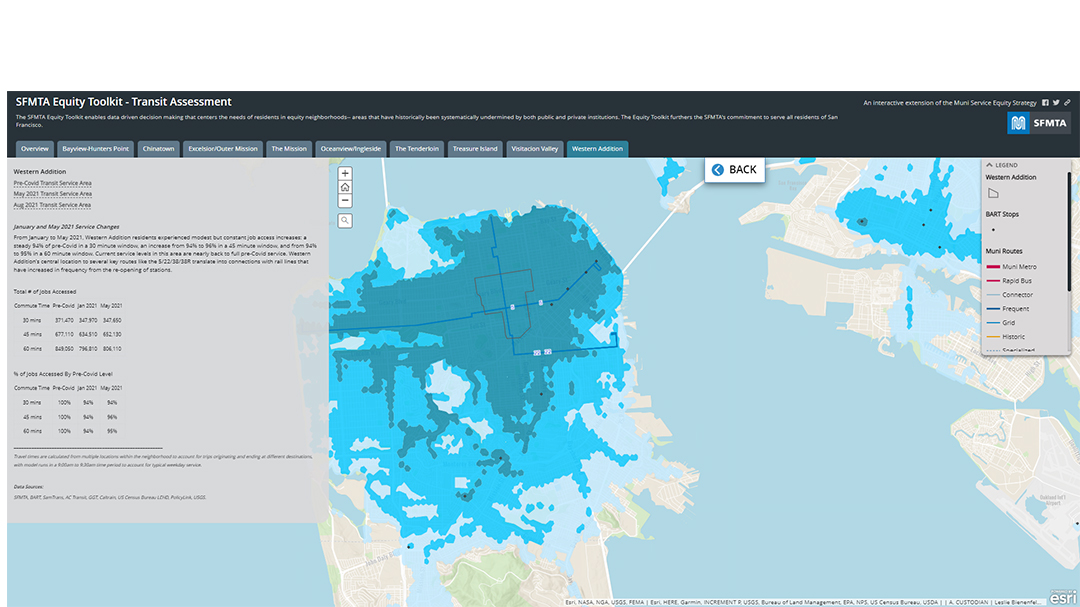 Race tends to be the number one indicator of outcomes throughout San Francisco, which is often tied directly to where people live. Both the Equity Strategy and Equity Toolkit are heavily based on geography and reflect racial equity impacts from transit service changes. With other demographics, things are more nuanced in the Equity Toolkit.

Nelson adds, "In order to measure access within 30-, 45- and 60-minute ranges, we had to identify specific geographic locations within neighborhoods to serve as center points. However, this approach has limitations that we are working to resolve. For example, when it comes to riders with disabilities, we found no geographic centers for where they live. This was not surprising to us. There were routes polled in our Muni Customer Survey that are regularly used by seniors or riders with disabilities, but because the Equity Toolkit is currently geographically based, these and other rider groups are not currently specifically captured. For the moment, we're using other tools to understand how service changes impact access to jobs and other opportunities for seniors and people with disabilities.

"Similarly, women generally don't live in the same tightly defined areas. We're considering how to address that. Our agency is also just starting to develop a gender equity policy.

"The City of San Francisco does have a Transgender District and several other known LGBTQIA+ neighborhoods, some of which overlap with Equity Neighborhoods as they are currently defined. But we have yet to make use of 2021 US Census data on LGBTQ residents—which show higher rates of poverty among this population—to refine our equity neighborhoods."

Efforts to build out the toolkit and make it more robust are ongoing. As the urgency of responding to the pandemic recedes, SFMTA staff can take a more comprehensive look at service needs. Service changes implemented in July 2022 represent the "new normal."

"Transit agencies across the Bay Area have been frequently changing service as we recover from the pandemic, so it's all been a bit of a moving target," says Nelson.

In part, this is because multiple agencies are involved. Single- and multiple-agency analyses, as well as trying to reflect rapid service changes and reality, is like, in Nelson's words: "having nine balls in the air at once." The team is therefore moving toward two types of analyses: Muni-exclusive and regional.

Although data limitations dictated the scope in the original version, Lin says that the team now has freer rein in terms of development.

According to Lin, "We also publish blog posts about service change analyses, in part to better explain the data to the public and encourage more intentional dignity-infused language, moving away from wonky terms and choosing words that are more respectful, easier to understand and identify with, and less technical.

"Close coordination with the Service Planning team—'Does this analysis look reasonable to you?'—provides a truth check. It would also be nice to be able to explain if sudden job increases or decreases were influenced by service changes on given routes.

"We use General Transit Feed Specification (GTFS) data from sister transit agencies, which has been challenging, but as our information is publicly available, it's important to get things right. It's also why it sometimes takes so long to complete an analysis because we want to be extra careful that the data is right."

The access to jobs calculation takes advantage of a Network Analyst methodology identified by Esri's Melinda Morang (https://bit.ly/3LXxzOD) and calculates accessibility for each minute between 9:00 a.m. and 9:30 a.m. and takes the 50th percentile from these runs to estimate job access. One of the frustrations the SFMTA Equity Toolkit team had was that the analysis is run after the service change rather than before. To achieve the ultimate goal of the SFMTA Equity Toolkit, the team is keen to modify both the toolkit and the process to evaluate the impacts of service changes before they are implemented. Lin says this may take the form of an annual evaluation that incorporates the SFMTA Equity Toolkit analysis from which more informed policy decisions could then be made.

"That involves a much more thorough 365-day analysis on which we can base policy decisions," Lin adds.

"The Equity Strategy would be rolled into this as well to give a much more comprehensive picture of our transit system.

"Service performance gaps and the needed investments to address them are incorporated into our agency's two-year budget process. The toolkit will probably undergo a similar adaptation. That will take us beyond short-term service changes and into the long-term service planning space. We also want to incorporate equity and transit planning farther in the SFMTA Strategic Plan. Again, that's a longer-term setting than we're currently used to with the toolkit."

Nelson points to another GIS equity tool that the agency wants to develop. This tool (in the form of a custom widget for ArcGIS Web AppBuilder) would enable users to run on-the-fly demographic impact analyses for capital investment projects. When a staff member draws a feature on a map, the widget will summarize the demographics of nearby residents, along with the number of jobs and businesses impacted, and whether the project overlaps with sea level rise areas.

"We are careful not to confuse impact with benefit," Nelson cautions. "These kinds of tools allow us to be more context-aware, but just because the demographics of a project impact area may appear to serve our larger equity goals, [it] doesn't mean the project necessarily does. The next step may be to compare demographics of the impact area with that of community meeting participants, as one example."

Advance equity in your transportation system