Two friends sitting around a campfire in August 2012 developed an idea that would help local governments manage their oversize and overweight (OSOW) vehicle permits from start to finish. One year later, Bryce Baker, a veteran police officer in Illinois who specialized in truck enforcement, and David Wordhouse, a software developer, had built a lightweight yet highly flexible web service and opened their business, Oxcart Permit Systems.

As Oxcart set out to develop technology that could process local OSOW permits, the carrier industry was clamoring for automation. Many states did not yet have online permitting systems, and several software companies were competing for business in that space.

Oxcart made its service easily available to motor carriers to identify a jurisdiction, apply for a permit using a customized form, and submit the application with a credit card payment. More than 200 villages, cities, townships, and counties in Illinois, Michigan, Wisconsin, and Indiana have signed onto the Oxcart platform.

Aligning with a State Department of Transportation

While the lack of available technology to process local OSOW permits was a driving force behind the concept of Oxcart, there was also a parallel movement brewing to provide technology to state departments of transportation. At the time Oxcart was conceived, only a handful of states had online permitting systems. The Illinois Department of Transportation (IDOT), one such pioneer in developing a public-facing internet site for OSOW permit application, built its service with routing help from geographic information system (GIS) mapping contractor GIS Solutions, Inc.

IDOT's solution, Illinois Transportation Automated Permits (ITAP), allows users to plot beginning and end points on an interactive map and calculate routes. Within a couple of years of ITAP's launch, the system was fully automating an unprecedented 99 percent of all OSOW permits. 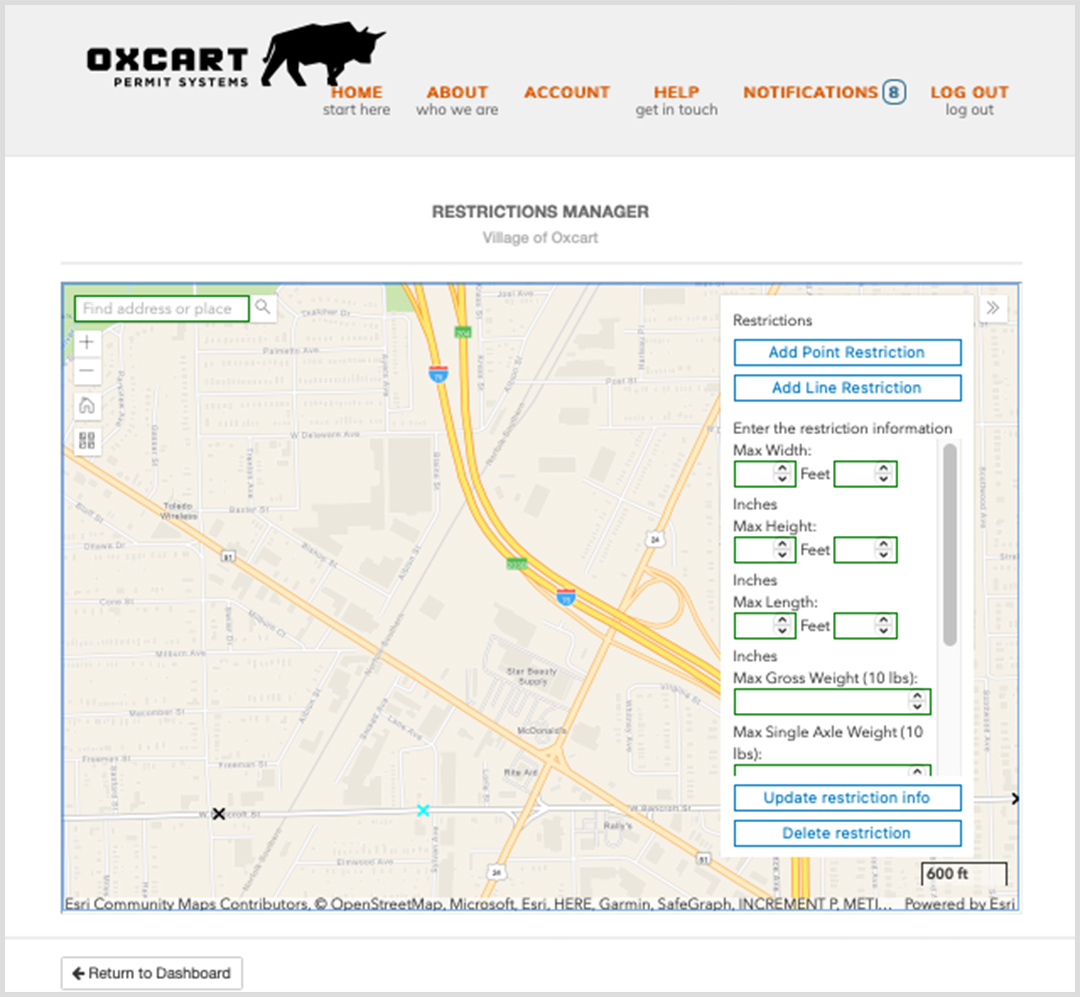 With carriers having experienced the advantages of internet-based applications and automated routing, Baker knew it would only be a matter of time before the industry would expect the same level of service from local government. So Oxcart built its routing solution using technology that was similar to IDOT's. This would provide carriers a user experience that was similar to navigating ITAP, and it would allow for a more seamless data integration between the systems.

Baker and Wordhouse reached out to Jim Conlon, owner of GIS Solutions, to discuss building a partnership. Both companies saw the potential to do something that had not been done before with the routing of local OSOW permits.

The routing piece for Oxcart needed to be more than just a clever pin-dropping interface that generated a route from point A to point B. Unlike state departments of transportation, many local governments lacked engineering data on bridges or vertical-clearance measurements. Therefore, barriers and restrictions could not simply be loaded into the system en masse. 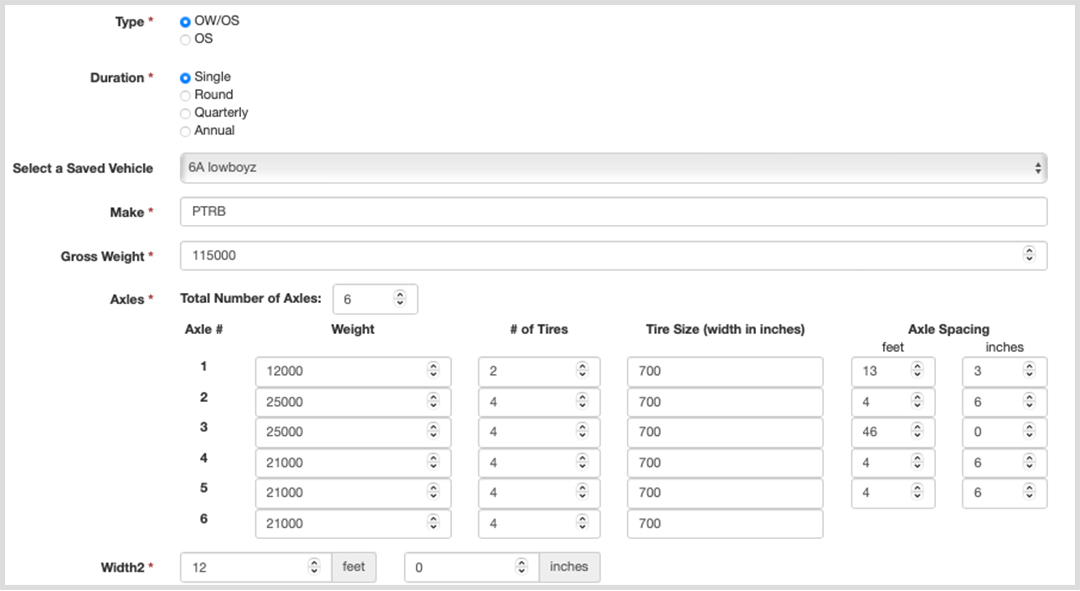 As state governments planned road construction on macro scales, local governments operated in very much the opposite manner. Many local road projects are smaller in scope with a shorter timeline. On a regular basis, local governments will shut down roadways temporarily for parades, school events, or water main breaks. The Oxcart solution needed a feature to allow local leaders to enter and remove restrictions in real time.

Another source of frustration for the carriers was not knowing which jurisdiction owned, maintained, and permitted any given roadway. Oxcart desired a solution that let local officials label road segments to define which jurisdiction belonged to which authority within the corporate limits of a municipality or county.

With these goals in mind, Conlon put together a team of GIS developers and built a base mapping system using ArcGIS technology from Esri.

The group decided on two main features to be used within Oxcart: the Restriction Manager (RM) and the Jurisdiction Manager (JM). Each feature would be accessible and editable by account administrators from a particular jurisdiction.

The RM provides the user a portal to plot various restriction pins on any highway within the corporate boundary. Barriers could be placed using height, length, width, gross weight, or axle weight. The weights and dimensions were dynamic and compared against the vehicle values entered by the permit applicant. 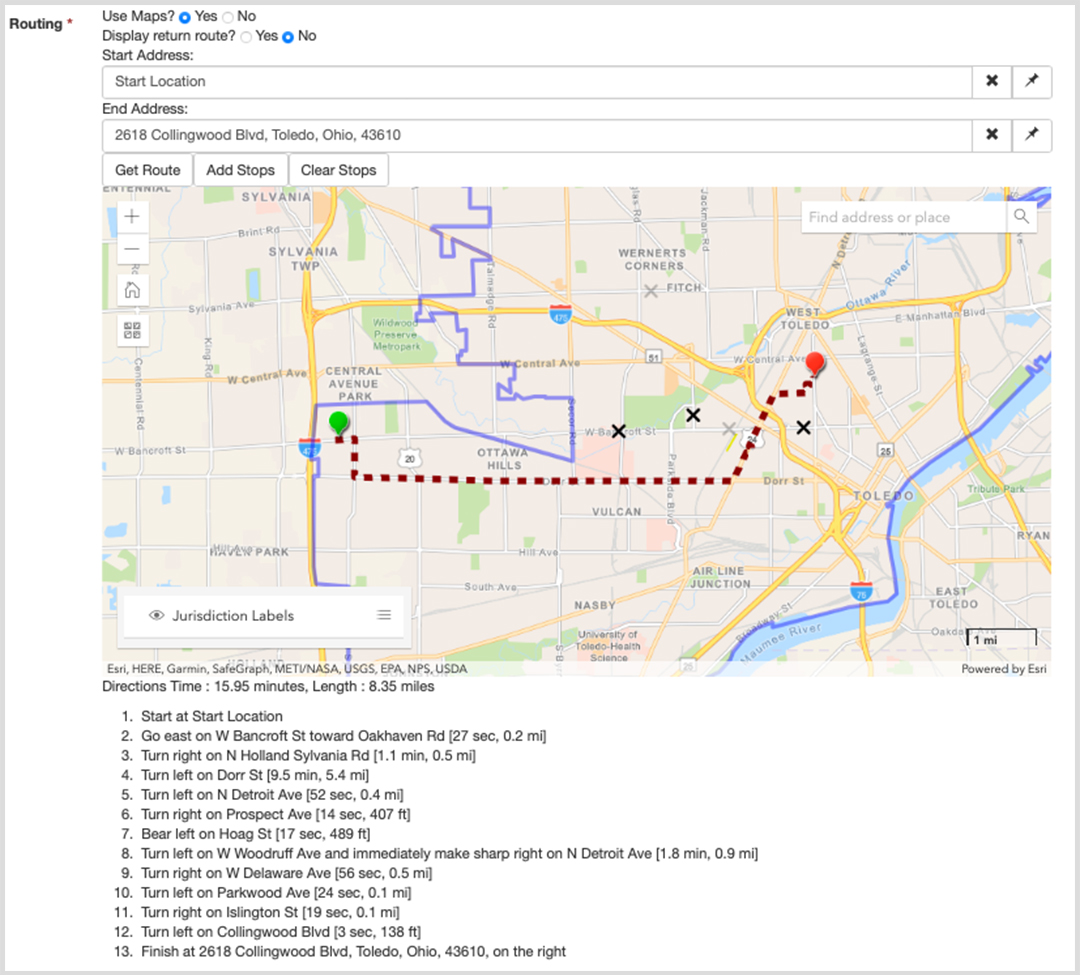 For instance, if a user entered a vehicle height of 15' 6", the system would route the vehicle around any vertical clearance in conflict with the assigned barrier. The feature also allowed users to assign an optional start and end date for each restriction, and the route would calculate against the start and end dates of the permit application.

A problem unique to local government was how to handle local weight-restricted roadways. It was not uncommon for local governments to establish less-than-legal weight limits on various road segments to prohibit unnecessary commercial vehicle traffic on narrow downtown roads or in residential areas.

To address local weight restrictions, the team used the same comparison strategy as other restrictions but allowed the user to assign line segments instead of only pins. This enabled the user to designate a stretch of road between two cross streets and assign it a lower weight limit. This challenged the GIS developers to allow maximum flexibility, as each local government had its own rules on commercial vehicle access to weight-restricted roads.

The JM presented its own challenges. Often, the jurisdiction of a roadway transfers from one unit of government to another. If this handoff is not recorded properly, knowledge of it is limited to the memory of local officials. The JM was a first-of-its-kind central repository for local government to document which roads belong to which jurisdictions.

With the JM, users can assign a jurisdiction label to any road segment within their corporate boundaries. If a roadway belongs to the county highway department for a mile, then ownership changes to the township and then changes once again to a municipality, the user can label the road as such. The roadway is assigned a color based on the level of government, which gives the carrier a visual to compare with the legend provided.

The beauty of the JM is that it informs carriers of which jurisdiction they need to apply to for a permit to travel on a desired roadway. Prior to this feature within Oxcart, carriers had to spend countless hours calling or emailing government officials to obtain this critical information.

Setting Boundaries and Growing a Business

To launch the new mapping system, Oxcart staff needed to track down corporate boundary layers for all clients. Many locals had their own GIS staff or contractors and were able to provide the necessary data. Those who did not were provided layers from various databases to verify accuracy. Once uploaded, carriers could see the geographical boundaries for each jurisdiction.

As the Oxcart footprint continued to expand, especially in the state of Michigan, the company began to process rights-of-way/utility permits. This necessitated a new map strategy using GIS technology. Applicants needed to be able to plot and delineate where work would occur. Local officials needed to visually track the status of multiple permits and schedule inspection visits. The team at GIS Solutions answered the call and developed an interactive GIS map that allowed municipal users to filter the map based on status.

In another example of product innovation, Oxcart recently launched a routing feature within its platform. The company plans to continue building on past successes, developing solutions that are flexible enough to suit processes and business rules that vary among local governments. With the base product live and processing permits, the partnership between Oxcart and GIS Solutions has only just begun. More than nine years after that initial discussion by the campfire, Baker and Wordhouse have now begun to realize their vision of providing seamless permits to the carrier community with the help of GIS Solutions.