Cataclysmic events have an unerring ability to find weaknesses and shortcomings in any human-made system and precipitate great change to those systems. To prepare for climate-related weather events, the Vermont Agency of Transportation (VTrans) developed a Transportation Resilience Planning Tool (TRPT). At its heart, the tool uses dashboards and apps based on geographic information system (GIS) technology from Esri.

In Vermont's case, precipitation is no idle choice of word. The state's pivotal event was 2011's Hurricane Irene, which deposited as much as 11 inches of rain in parts of the state within just hours, causing widespread flooding. 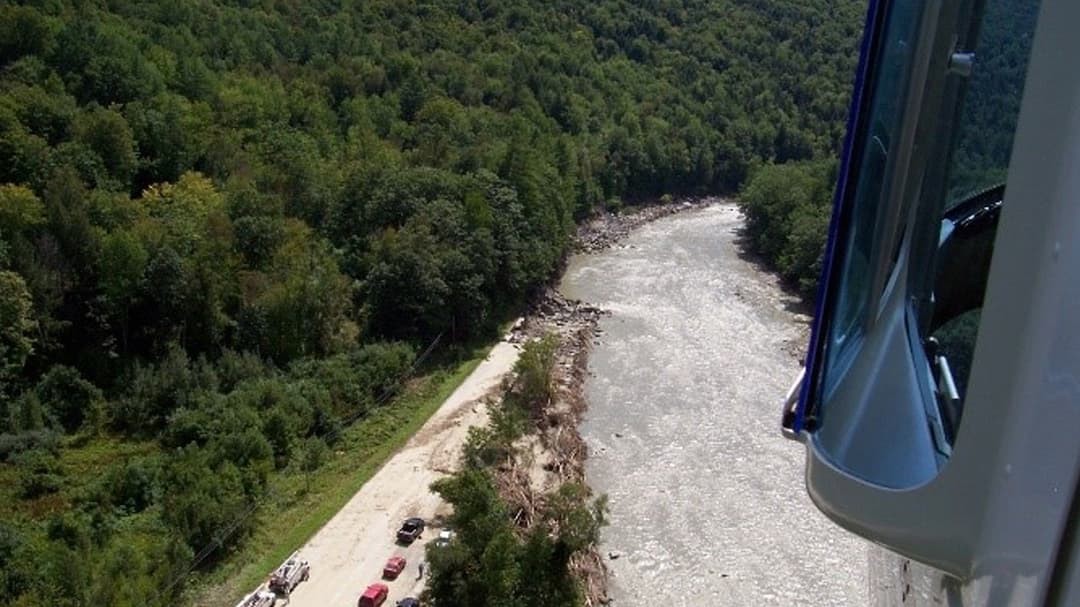 Impact and damage from Hurricane Irene captured from an aerial view.

Irene destroyed or damaged more than 2,400 roads, 800 homes and businesses, 300 bridges (including historic covered bridges), and half a dozen railroad lines in Vermont. Several Green Mountain State communities were entirely cut off by the flood and erosion damages, some for up to two weeks, and disruption to US Route 107 and other roads across the Green Mountains made east-west travel through the southern half of the state nearly impossible.

Though Irene struck in August 2011, repairs went on for years. In total, damages in Vermont from America's sixth-costliest hurricane came up to some $733 million.

Goals in developing the TRPT included the ability to identify at-risk infrastructure, consider building greater resiliency into infrastructure whether through initial design or subsequent upgrades, and apply more effective management strategies based on key safety and capacity/access points along the transportation network.

"We have a declared disaster in the state around every 18 months or so. That's not necessarily always on the scale of Irene, but we want to get ahead of the problem next time by identifying vulnerable network segments and also how critical they are. That gives us a measure of risk and enables us to prioritize changes as well as recovery efforts," says Joe Segale, policy, planning, and research director at VTrans.

Before Irene struck, Segale says resilience was not as high of a priority. "There were programs for safety, for bicycle and pedestrian, bridges, transit . . . but not resilience. Irene changed that."

Now, the agency places more emphasis on strategic and long-term planning with climate resiliency built into the processes. The TRPT will provide the data the agency needs to increase resilience as part of planning and prioritization.

"The way you bring resilience forward is to integrate it as part of what you do every day, not have it as a stand-alone program," Segale says.

From the outset, GIS was regarded as the solution of choice. Segale points to the ability to bring together the spatial elements of VTrans road infrastructure and local river systems.

"There's just no other way to do it, in my mind—you can't just use a spreadsheet," he explains. "Another reason is ease of use once the data gathering and app building are done. Vermont has around 250 small towns, and while we have hundreds of engineers within the department who can interpret data, we also have a lot of volunteers throughout the state who need a tool that allows them to easily understand where the risks are."

VTrans has spent around $1 million on the TRPT so far, with the initial half million dollars being 60 percent funded by the Federal Emergency Management Agency (FEMA). It is a clean-slate exercise—nothing remotely similar was in place before—and is close to completion, save for final data development in the remaining parts of the state.

A pilot on three watersheds included application of the TRPT on the Route 107 and Route 9 east-west corridors. Once data gathering for the whole state is fully completed, the tool will form a major part of Vermont's flood resilience efforts. Segale says it will significantly help VTrans partners and regional planning commissions develop local hazard mitigation plans and access FEMA funding. Since Irene, VTrans has been collaborating with a key partner, the Vermont Agency of Natural Resources, Department of Environmental Conservation, Rivers Program. Their joint ambition is to reduce flood and erosion risks while also protecting water quality and habitat.

Roy Schiff of the consulting firm SLR says that determining vulnerability—how susceptible an asset such as a bridge, road, or culvert is to failure—once relied on hindsight rather than a forecasting process. A statewide geomorphic dataset, which covered roughly 2,500 miles of field data on river forms and functions, was merged with historical data on damage to roads and infrastructure.

"We looked at the proximity of the two," says Schiff. "So how much of a road is in a floodplain or river corridor? What's the vertical difference? How does the width of a bridge compare to the width of a river? We developed screening methods to identify vulnerabilities and then developed algorithms for inundation, erosion, and deposition, and for three floods—10-, 50-, and 100-year."

A distinguisher is that other states' solutions tend to concentrate only on inundation and FEMA's flood maps. Vermont's stands out because it also takes into account the other two processes—erosion and deposition. 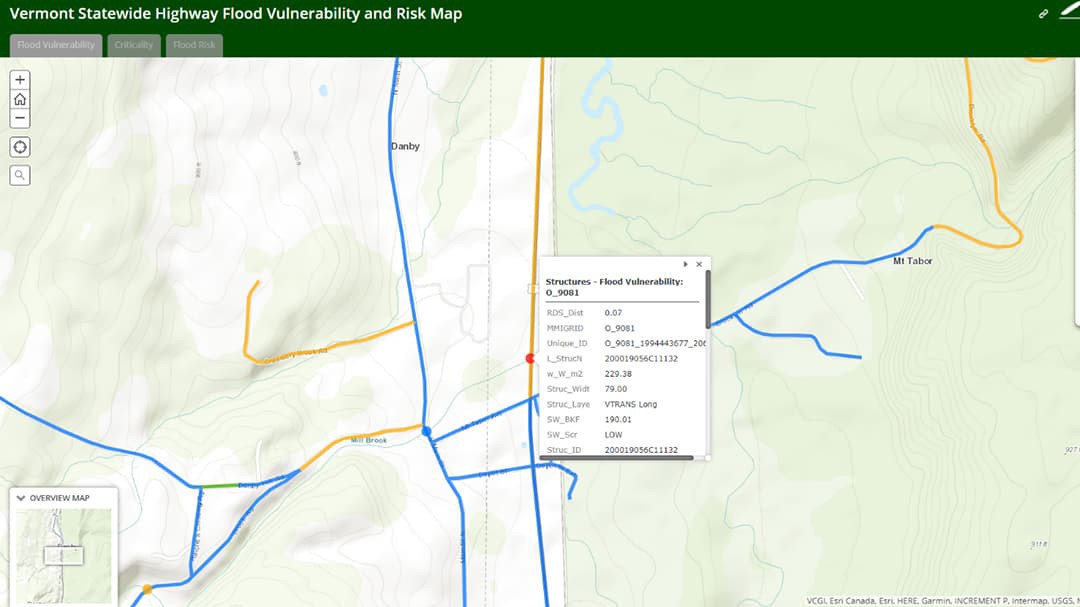 Each transportation asset was evaluated based on flood vulnerability, criticality, and flood risk.

In terms of criticality modeling, what is truly novel is how the network criticality indices have been developed and refined. In simulations, vulnerability probabilities are attached to road network segments to determine failures.

"We found that the modeling could identify spots that, if they broke, the whole road network started functioning poorly," Schiff says. "But that left out some areas that people really relied on to get around when parts of the network were down. So we asked people to identify the locally important roads."

Schiff and his team also employed a Critical Closeness Accessibility Index developed by Jim Sullivan at the University of Vermont.

"This looks at how close people are to important services—shelter, fire, rescue, food, schools, and so on," Schiff says. "It asks, 'If this part of the network breaks, are we going to lose connection to services?' Bringing all these elements together gives a criticality value. The risk value is an average."

At the earliest development stages, members of the public along with staff from VTrans and the planning commission were included in the user group and helped bring out specific knowledge.

"We asked for input on whether we got the vulnerabilities right or if there were things that we missed," Segale says. "On the criticality side, we asked if there were roads we were not picking up with our methodology. We also needed the app to be easily understandable by them—and especially by those who make budgetary decisions—so that it feeds into their capital planning."

Barbara Patterson, of Stone Environmental, was responsible for TRPT application development and noted usability as a prime criterion.

"On opening, the app is already displaying the vulnerabilities of road segments," Patterson says. "This happens by default at the highest level. Finding 'your' watershed is relatively simple, and you can search by location."

The app is now operationally complete, and the team is working to build out the dataset statewide. Regional planning commissions have been supportive of the tool and started doing their own analyses. "In particular, they're really excited to see all the work that they've done, accessible in one platform," Patterson says.

"The tools developed by VTrans give a measure of where we are in terms of flood resilience," Segale says. "We can determine what percentage of our culverts are highly vulnerable. A particular lesson from Irene is that culverts were the 'forgotten soldiers,' but there are all kinds of performance metrics that we can pull out and track over time."

Though Segale acknowledges the difficulty in finding the right data to measure what's most important, he is confident that the new tools will provide that information.

Next steps could include further expanding the stakeholder group to create yet more synergies, a more comprehensive dataset, and a better appreciation of performance for roads and other infrastructure. A Vermont bridge with its vulnerability and criticality rating, and proposed remediation measures.

For example, Green Mountain Power, which supplies around three-quarters of Vermont's electricity, has expressed interest in the VTrans tool and methodology as a means of gauging power infrastructure vulnerability. The state's railroad infrastructure could also benefit similarly.

Another possible application is to overlay results from the TRPT with water quality improvement needs on the highway system to look for opportunities to address both issues. Vermont's Lake Champlain, one of the largest by volume in the US, is currently the subject of a pollution prevention, control, and restoration plan. Agricultural and urban runoff has led to a phosphorous problem and an issue with algal blooming. One of the river basins currently monitored by VTrans, that of the Missisquoi, feeds directly into the lake. Segale says it may be possible to overlay the resilience tool to determine any relationship to water quality. Culvert performance at wildlife crossings could also provide an opportunity for addressing multiple issues.

Finally, the TRPT provides a strong basis for MAP-21 Part 667 reporting to the US Federal Highway Administration (FHWA) of repeat damage to the National Highway System—a mandated requirement. Its benefit is threefold: providing a greater understanding of where repeat damage is a result of declared emergencies; ensuring that assets are constructed such that they do not suffer repeated damage; and safeguarding that FHWA funding is used where it has the greatest benefit.

Vermont has a proud tradition of responsible environmental stewardship. With the creation of the TRPT, VTrans takes a leadership role, building climate resiliency into its statewide planning processes and helping local governments prepare for a much less predictable future.

Empower your work with a system of engagement