When expanding its service territory, Central Arkansas Water (CAW) relies on its geographic information system (GIS) team to provide valuable insight with maps and data to show the best and most cost-efficient expansion route.

CAW serves approximately 450,000 people in 17 surrounding communities and maintains more than 2,700 miles of water main. The utility began using Esri products in 1996. Since then, CAW has continuously expanded on the technology by taking advantage of the capability to program its own custom tools in ArcGIS Desktop and perform in-house spatial analysis.

CAW is embarking on a large, rural expansion into territory not currently served by a public water system. The project will consist of about 50 miles of new pipeline, serving an area of approximately 22.5 square miles. The utility has a robust GIS Division with seven employees and strong buy-in from other departments and upper management. This history of interdependence and cooperation between departments, employees, and even outside agencies is what has allowed the process of planning the current expansion to go so smoothly. GIS tools have been crucial to the project from the beginning.

The West Pulaski Expansion Project started with work from the Communications Department. The team sent out mailers, held town hall meetings, and gathered potential customer information to help determine the feasibility of expansion into the area. A data list consisting of customer names, addresses, and the dollar amount customers were willing to pay as a debt surcharge on their water bill was then provided to the GIS Division for analysis. ArcGIS Desktop was used to geocode this table using address points provided by Pulaski Area GIS (PAgis), an organization that provides basemap data for the Pulaski County, Arkansas, area.

This data was then symbolized by how much of a surcharge the homeowner was willing to pay (nonbinding) and used to produce maps to help management visualize the information. The points were also brought into an ArcGIS Pro project and symbolized as a heat map to make the concentration of interested people even easier to visualize. These data and documents were instrumental in helping decision-makers move forward with the project. 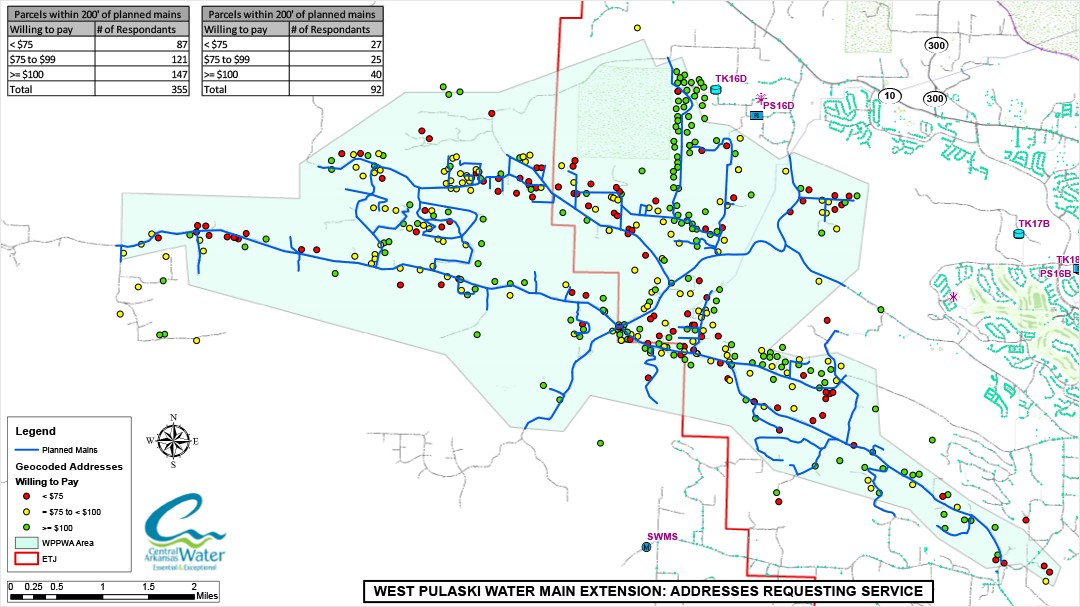 Shown are geolocated service locations categorized by a willingness to pay. Also included are tables reporting the number of services greater and less than 200' from the first iteration of the main layer.

Once the project was approved to continue, the Engineering Department used the PAgis planimetric layers (address points, road centerlines) and existing CAW main layers to plan out a preliminary main expansion layer. This planned main layer was then provided to the GIS department to perform spatial and statistical analysis.

The most crucial question to be answered is, What would be the most efficient and economical locations to install new mains and in what order? First, each potential service location was checked to see if it was "served" or not—meaning that it was within 200 feet of a main in the planned main layer. Initially, the plan was to run a selection process to see if the address point itself fell within 200 feet, but that returned an unexpectedly high number of unserved locations. This was found to be caused by the rural nature of the area, with houses on large parcels and well away from a road.

This issue was resolved by first selecting every parcel that was within 200 feet of a planned main, and then selecting all locations that were on a selected parcel. This returned much better results, and with some manual checking for split parcels or missing data, the process was deemed acceptable for further analysis. Statistical information was created, such as length of pipe by size and material, total served/unserved locations, and served/unserved total categorized by amount willing to pay in a surcharge. The payment categories were less than $75, $75 to $99, and $100 or greater. This information was used to determine the best places to install the main based on which areas have a higher concentration of residents willing to pay the surcharge to have public water, as well as where to install and where not to install mains on residential streets based on the number of potential customer connections. 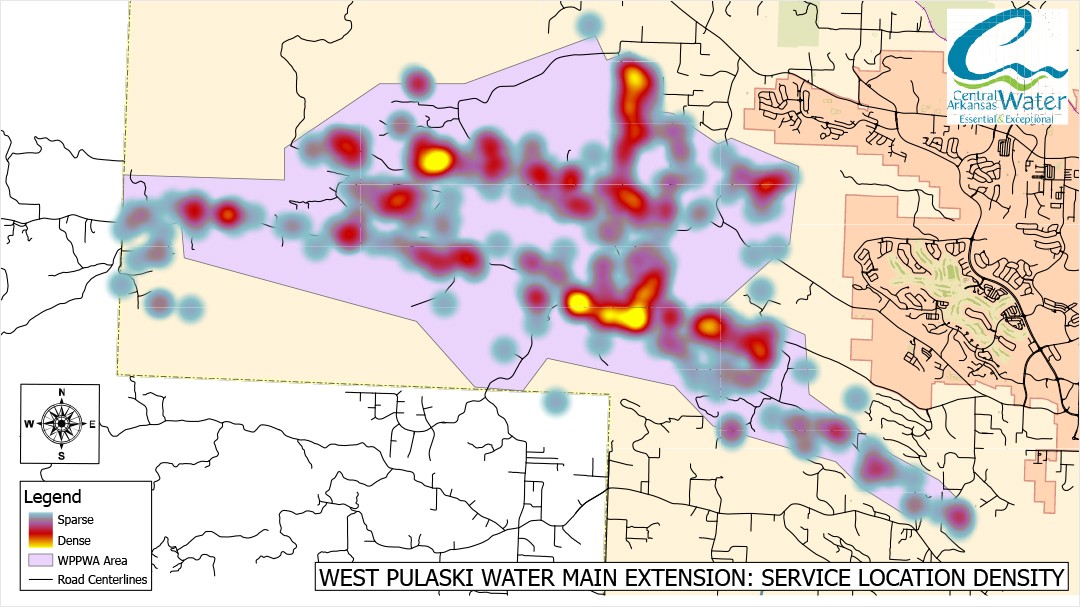 A heat map shows the concentration of possible service locations overlaid onto a street map of the service area.

Weekly meetings were conducted via videoconference (due to COVID-19 restrictions) to review the updated information and analysis. The maps by GIS provided the centerpiece of conversation. The combination of visual identifying of potential customers and payment levels, along with the construction cost analysis, spurred the critical thinking needed to solve the unique challenges of implementing the project. With each new approach, the Engineering Department adjusted planned mains, and the GIS group would follow with a new spatial and statistical analysis.

A breakthrough change to potentially get the project under construction was to meticulously phase the project into segments.

The Engineering Department created a polygon layer representing the expected phase areas and requested updated statistical analysis based on these new areas. One issue was that the planned mains were created in very long segments that crossed these new boundaries often. The GIS Division used the ArcMap Identity tool to create a new main layer that was both split at the boundaries and populated with the correct area name within the attributes. This allowed GIS to more easily and accurately provide the expansion team with a breakdown of planned mains by size and material for each phase area. A breakdown of potential customers based on phase area and level willing to pay was also created. The Engineering Department was excited to get such accurate and timely information.

With the data conveniently particularized, it allowed the Engineering Department to conduct an expedited construction cost analysis for each phase by applying the unit cost per linear foot to each main based on size and material. The construction cost was multiplied by a constant factor to account for engineering design, easement acquisition, legal costs, and bonding costs to attain total project costs. With the current record low or near-record low bonding rates, the monthly payment for a 30-year loan was calculated. This payment was divided by the number of potential customers to determine the customers' monthly surcharge needed to repay the loan.

“In the 21st century, GIS is much more than just a mapping tool. A project like this shows just how important GIS is with so many analytical questions during the planning phase of potential expansion. The spatial, statistical, and cost analysis provides insights into financial impacts and future planning of installing new infrastructure. By taking data provided by the Communication and Engineering departments and displaying them in one place makes it easier for decision-makers to visualize the expansion. “ – Alex Harper, GIS Manager, CAW 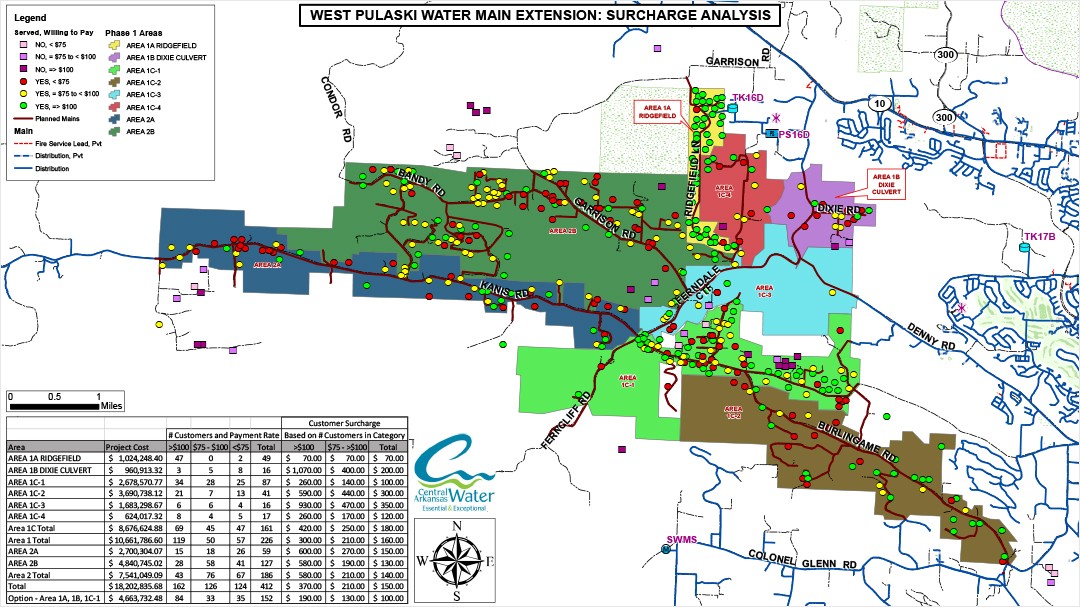 A map shows geolocated service locations categorized by proximity to planned mains and reported level of interest and the project area broken down into phases. Also included is a table showing projected cost and customer surcharge based off of analysis done using shown layers.

The GIS Division and Engineering Department will continue to work together to provide updated maps and analysis to the expansion team until the planning phase of the project is completed. The completion of this project will help close a gap between two water systems that CAW maintains currently and deliver high-quality, safe drinking water to the citizens in the western part of Pulaski County, Arkansas.

Thanks to the collaboration of Engineering and GIS departments, the team was able to quickly leverage technology to display information that simplified planning on such a large scale and complex project. Utilizing GIS mapping is integral across CAW operations; it is essential from conceptual planning, to design and construction, to long-term asset management.