The Iowa Great Lakes Sanitary District (IGLSD) is a wastewater collection and treatment facility. IGLSD's work is critical for protecting the high water quality of Iowa's Great Lakes. These lakes are part of a chain of glacial lakes that span about 15,000 acres. The Iowa Great Lakes area attracts over one million visitors a year according to the local chamber of commerce.

IGLSD's wastewater collection system was installed in the late 1930s by the Work Progress Administration and has grown since. Today, the system collects water from over 10,000 connections in seven cities and some unincorporated areas around the Iowa Great Lakes. The district collection system has 64 lift stations, over 100 miles of gravity sewer pipes, and over 2,000 maintenance holes. The wastewater treatment plant has an average flow of 2.5 million gallons per day with the capacity to handle up to 7 million gallons more per day during the tourist season. The wastewater treatment plant also has storage capacity for an additional 7 million gallons on-site used during extreme wastewater flows. This sanitary sewer system collects wastewater from around the only two lakes designated as Outstanding Iowa Water Bodies, West Okoboji Lake and Big Spirit Lake.

Much of the work completed at IGLSD was documented on written reports or not documented at all. Verbal reports of asset conditions or updates went undocumented and often lacked follow-up. IGLSD needed to improve the documentation process to help understand what work needed to be done, what had been completed, and the status of ongoing work.

District staff historically documented all permits and inspection reports for sewer connections on paper. This process proved to be inefficient. Field inspections were occurring without permits being issued. Inspection reports were being completed but did not always provide the necessary details and often didn't get filed at the office promptly. In most situations, inspection reports could take weeks to be filed; occasionally, this took months.

Service line camera inspections are required when a building permit is issued. There was no formal documentation process for these inspections. Sometimes these were documented on paper and from time to time found in written work reports.

Inspections for illegal sewer connections needed to be documented such as sump pumps, downspouts, and exterior surface drains that allowed groundwater or surface water to enter the sewer system from private homes. Proper documentation would enable the district to take corrective actions and verify that the properties were inspected.

Responding to One Call (locate requests) was performed with minimal record keeping. In some cases, rain washed away paint or flags were moved. Staff needed a way to record where and when markings were placed.

Paper forms were required to issue a permit. Because this work impacted field crews who performed inspections, office and field staff needed a way to communicate what permits had been approved and what inspections needed to be completed.

Staff performing jetting and camera inspections would often notice if maintenance holes needed repair. In the past, this would be verbally reported but not documented. The information about the needed repair was sometimes lost, and work was delayed. 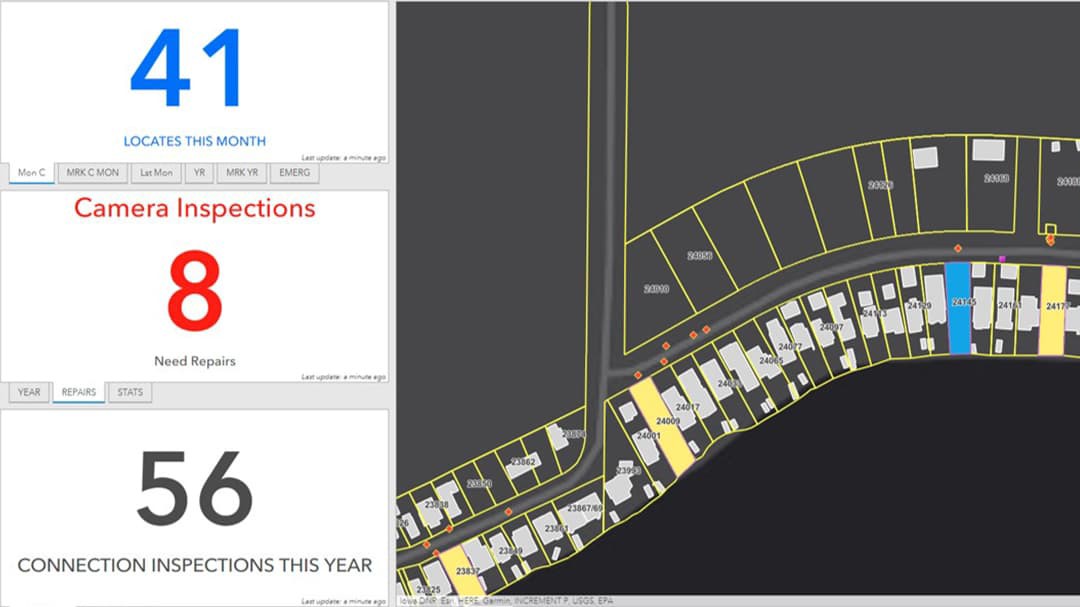 ArcGIS Dashboards provide an overall view of work being completed.

IGLSD implemented ArcGIS Collector and ArcGIS Survey123 to support field and office data collection and communication. The information collected from these applications is displayed in ArcGIS Dashboards to provide an overall view of work being completed.

The first step in implementing this solution was to test the applications on an iPad. IGLSD purchased an iPad, and staff configured the applications and implemented them in the field. While testing ArcGIS Collector and ArcGIS Survey123, they discovered that the applications could be used for more than planned. The test was successful and led to the purchase of iPads and the implementation of mobile workflows.

Communication has improved with real-time notifications such as when an inspection is completed by staff in the field. An email is sent to office staff so they can update the billing for a new connection. Office staff and superintendents now have the ability to verify that permits are issued, camera inspections are completed, service line inspections are in process or completed, and if a property has had an illegal sewer inspection completed. Through the use of GIS, the billing is more efficient and timelier. In the past, it would take weeks—even a few months—to get this information to the office. Now billing is going out within a day of the connection!

It is much easier for staff to find information in the database systems using ArcGIS Survey123 or look up reported items using ArcGIS Collector. The district is saving time and reducing the effort of figuring out situations as they occur. One example of this is when a home under construction was inspected by a superintendent. Instead of waiting for the staff meeting the next morning and asking if anyone remembers a camera inspection at the property, the superintendent is able to pull up the information on the iPad and verify if the private lateral sewer line had been inspected.

If there is a question on a locate, staff can quickly identify who did the locate, when it was completed, how it was marked, and verify the information with photos. There have been situations where locate flags have been moved, and through the use of Survey123, IGLSD now has documentation that provides a clear picture of how the locate was done.

Frustration of staff about not knowing what inspection was completed and not completed or who performed an inspection is no longer an issue. The use of the applications has improved morale and increased efficiency. Office staff are not behind in billings, and the field staff can quickly document their work before they leave the site.