Over 100 years ago the construction of The Little River Drainage District (LRDD) began with hopes and dreams of converting Southeast Missouri into useful or usable farm ground. The land that was once covered in 95 percent water and trees now provides almost one-third of Missouri's agriculture commodity production. Because of the work of brilliant engineers and hardworking people, there is now a system of 1,000 miles of ditches and 300 miles of levees that carries water through Southeast Missouri and Northeast Arkansas, eventually entering the Mississippi River near Helena, Arkansas. Due to the vast size of LRDD, Esri software has played a major part in helping the district to continue to effectively and efficiently manage flood control and drainage infrastructure. 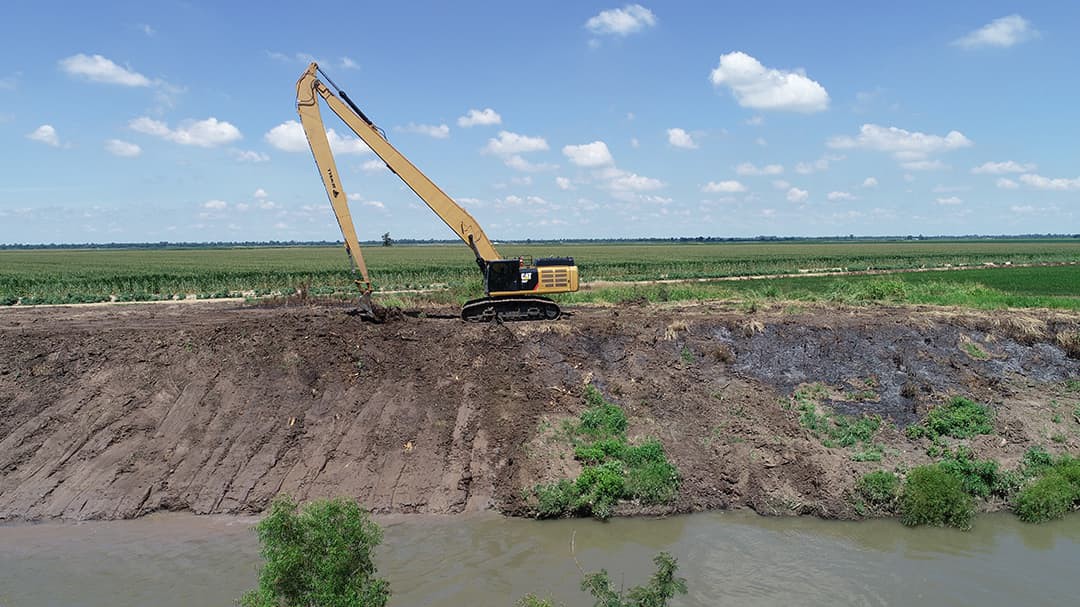 Pictured is one of LRDD's long reach excavators mopping out a floodway in the south district.

The Little River Drainage District owns and operates approximately 50 units of heavy equipment. With a growing fleet of equipment, LRDD was beginning to have issues accurately logging and tracking fuel usage. The old process for tracking fuel was for field personnel to write down on a report each time fuel was checked out of LRDD's bulk storage sites. At the end of the month, the paper reports were then turned in and processed, which consisted of manually entering data from the reports into the computer system. Once entered, LRDD could track the fuel usage and cost for each piece of equipment for that month. This was very time-consuming and would often be inaccurate. LRDD knew its method was outdated and needed updating, but when looking into fuel management systems, they ranged anywhere from $35,000 to $50,000 a site. This was not feasible for the district's operation.

Blake Hagedorn, a civil engineer for the Little River Drainage District, manages the ArcGIS data along with streamlining field processes. Being familiar with the Esri products, Hagedorn focused on how to use Esri's ArcGIS Survey123 software to collect the data that LRDD's employees would log. With the help of Eric Wagner, a solution engineer for Esri's water team, LRDD staff were able to use Survey123 to collect fuel data as well as utilize a dashboard to break down their monthly fuel reports. It became a very simple and easy system to use, consisting of personnel selecting from drop-down menus to fill out an electronic survey detailing who checked out a certain type of fuel to a specific equipment unit. Once the surveys were entered and submitted, a dashboard was set up to process and generate a report. The final reports will then break down the cost that month with a simple click of the mouse. 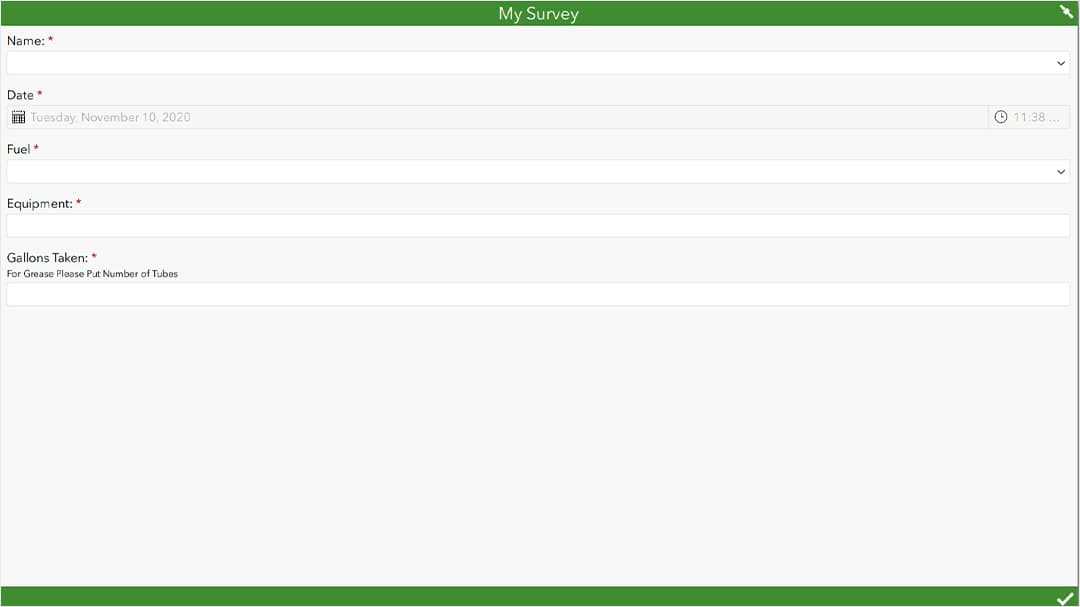 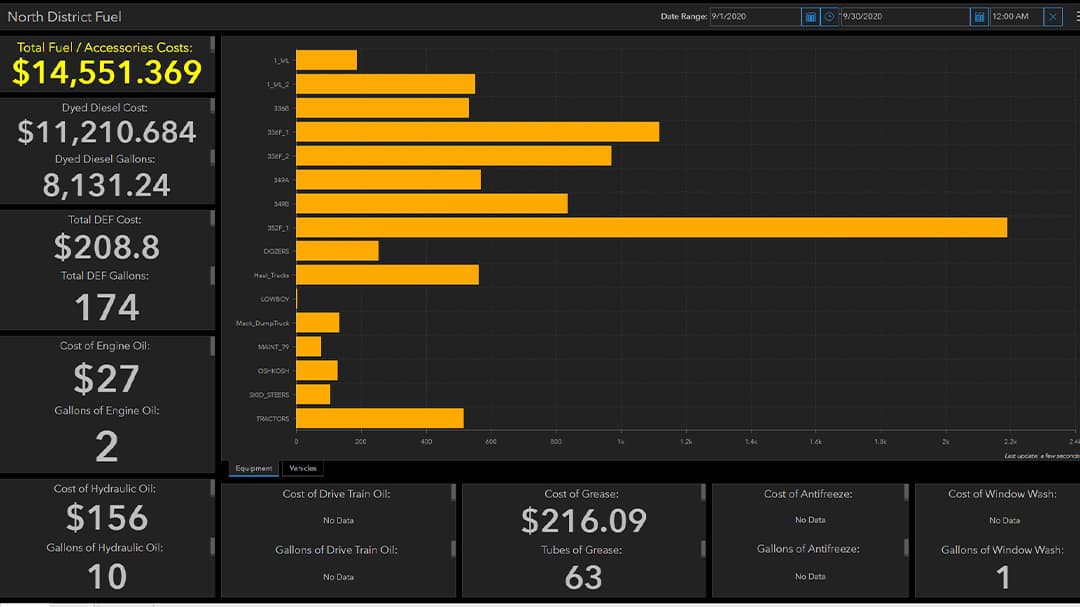 The Little River Drainage District employees are now able perform their job much more effectively and efficiently with the help of the Esri fuel management system. This system eliminated the need to manually input and process the data collected in the field. Utilizing this technology has drastically reduced the time spent processing and checking data to minutes rather than hours.

"Something that used to take a day's worth of time is now just a finger click away," says Belinda Welker, the treasurer for the district.

Everyone is familiar with the phrase, "Time is money," and utilizing Esri's team and software is a prime example of both time and money savings in a real-life application. Seeing the results of how powerful Esri's software can be has now given Hagedorn other ideas for the future, like possibly using the software for field personnel time sheets or maintenance logs. The possibilities are truly endless. The Little River Drainage District looks forward to continually advancing with the help of Esri and its team. 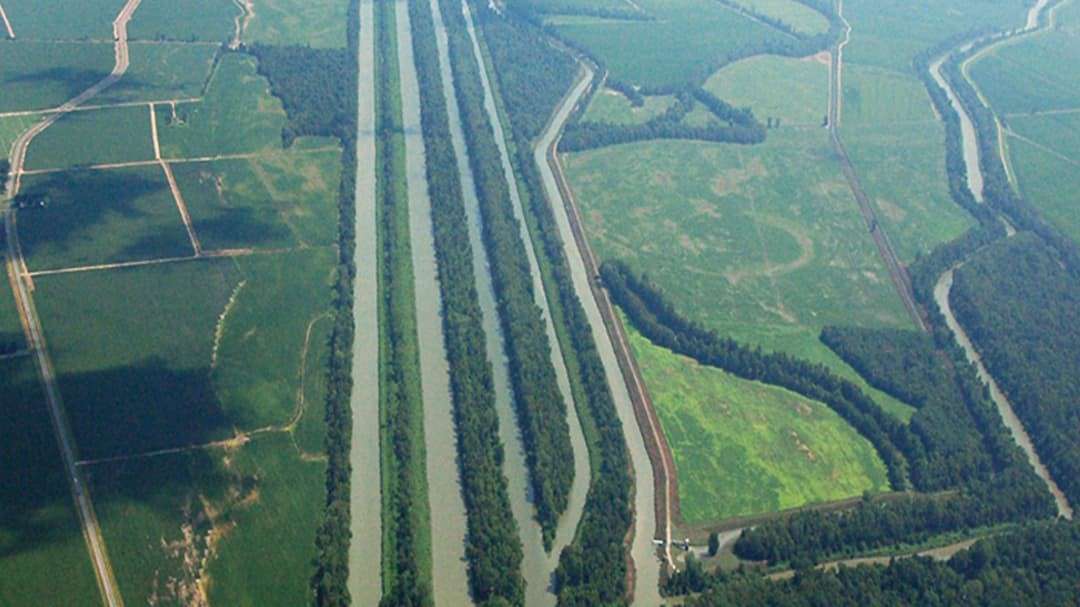 Five Parallel Floodway Ditches: Pictured at the lower end of the district, these ditches start to come together and flow into one down into Arkansas.