From flooding and severe weather to sporting events and large-scale protests, the Emergency Operations Center (EOC) of the Town of Chapel Hill, North Carolina, strives to protect the lives of its 59,000 residents by having an emergency management plan ready when perilous situations occur. The EOC brings experts and technology together to coordinate resources, information, and communication to detect and respond to critical incidents and emergencies.

EOC activations require resources and the coordination of multiple partners, such as law enforcement, fire departments, emergency medical services, and public works. Communication and sharing relevant data are key to effective incident management, and the Chapel Hill EOC team needed an efficient way to manage and disseminate information with internal and external partners. Historically, the EOC had no comprehensive method of collecting data and sharing information, and processes that did exist were very labor intensive. As such, they set out to develop informational dashboards created by the Town of Chapel Hill GIS and Analytics Division that were geared toward sharing information and data in real time.

Results
A set of informational EOC dashboards that have enhanced situational awareness, improved access to information, and helped streamline decision-making during every EOC activation

EOC personnel and the GIS staff enlisted the help of Blue Raster, a firm that develops interactive web mapping applications, to produce customized dashboards for emergency events. Blue Raster created a series of real-time dashboards with charts, maps, and other visual elements, and the dashboards provided access to the town's EOC key data from one centralized location and enhanced situational awareness for the EOC and its partners.

Depending on the nature of an emergency, there could be anywhere from 2 to 40 partners providing emergency coordination and support, so real-time data and communication are essential no matter the scale of the event. According to Kelly Drayton, emergency manager for the Town of Chapel Hill, the town has experienced nearly nonstop activations of the EOC due to critical events over the past three years.

"How you communicate and maintain that common operating picture during a fast-moving incident is really challenging," says Drayton. "And being able to bring everybody together on the same page is critical because that becomes the foundation and starting point for talking about how we are going to protect life, property, and the environment."

There was no comprehensive solution in place to communicate information previously, and Dave Almond, senior GIS analyst for the Town of Chapel Hill, explains that solutions had been created "by request." Drayton would go to the GIS team before a weather or high-interest event, and they would work together to create theme-specific dashboard solutions.

Also, not all personnel had access to the same tools during activations, so it was not aggregated and became more of a 'piecemeal' approach, explains Drayton. "I think we just realized we could do this in a more efficient way," she says.

Drayton says by the time the EOC team updated partners about an emergency, the details would instantly change because of the rapidly evolving nature of the event. Without the common operational picture, she says it could take a lot of time to get personnel on the same page to begin the conversation about the operational objective and next steps. She enlisted the help of the Town of Chapel Hill GIS team to develop a new solution.

"Kelly approached me with this, and it's part of my job to champion GIS as a potential solution to enable Kelly and the people she works within the EOC to have the best available information," says Almond.

To develop a comprehensive solution for the EOC, Blue Raster, an Esri partner, was brought in to help customize existing dashboards, which the EOC team decided was the best option because they could be tailored for various units. Christie Roland, account manager at Esri for the Town of Chapel Hill, was familiar with Blue Raster's work and connected Drayton and Phil Satlof, a program manager at Blue Raster.

"With the critical timeline, the disparate nature of all the data sources, and so much data coming from so many places, it was critical for us to have somebody like Blue Raster and its team focus solely on that project," says Almond.

Satlof began by checking out the existing EOC dashboards created by Almond and his team, and Drayton provided a list of things she wanted to build into the dashboards.

"When we initially saw the work that Dave [Almond] had done, I said to my GIS analyst 'Well, what are we going to do? It looks like they're in really good shape.' But it turns out Kelly [Drayton] had a list of things she wanted," says Satlof. "So that's where we took over. We had meetings to kind of figure out, okay, so you have a bunch of dashboards. What value can we add to the team?"

Drayton met with individual teams across the town to ask what each one needed when it came to information sharing during an EOC activation and presented that information to Satlof. ArcGIS Dashboards was used to further develop and customize the existing dashboards. ArcGIS Dashboards is a unique tool that allows users to display all their relevant data on a single screen by combining maps, charts, and images. Because this project resulted in several dashboards, Satlof and his team used ArcGIS Experience Builder, a tool to transform data into web apps, to host the dashboards in a single place.

Satlof explains that they broke down the project structure into two functional groups: the front-end work and the integration with the computer-aided dispatch (CAD) system. Chase Barnard, GIS coordinator for the Town of Chapel Hill, worked with Satlof and Blue Raster GIS developer Patrick Hill on the CAD integration, while Almond worked with Drayton and Sarah Aldama, GIS analyst with Blue Raster, to configure the dashboards.

"It was a nice integration. Our skills matched up nicely internally for the various tasks with Blue Raster," says Almond. "I worked mostly with Sarah [Aldama], and she really excelled just in terms of her knowledge, skills, and abilities."

The group created four unique dashboards, including an executive summary dashboard designed for the policy group who provides strategic level direction when there is an activation. The new tool also has a list of town services, historical data, a map with various layers available to show different types of data, and a heat map that displays 9-1-1 data for the town. Drayton says the collaboration was wonderful. 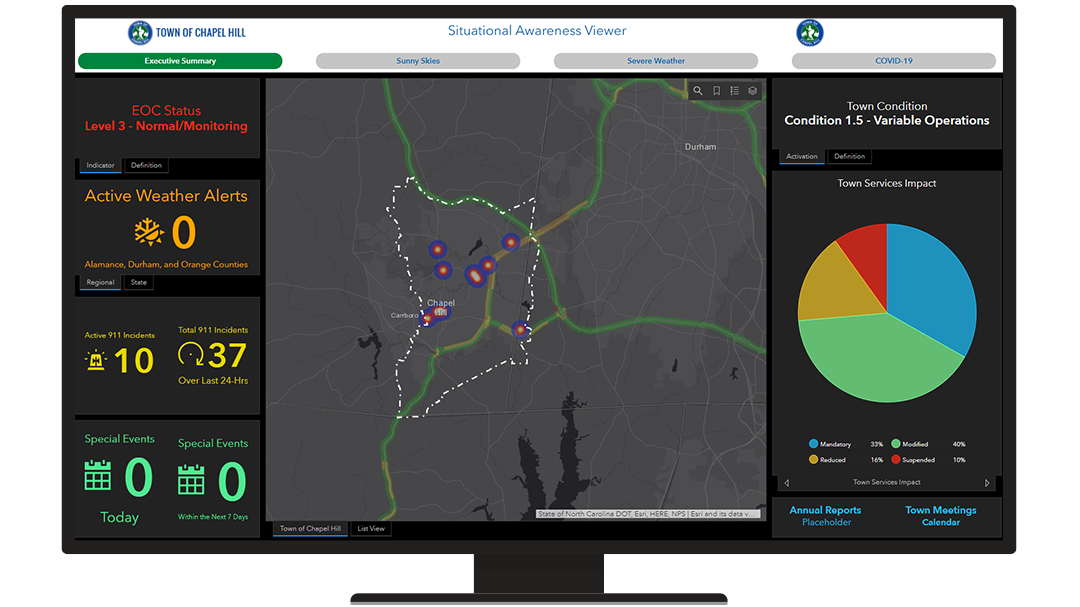 The Executive Summary dashboard gives EOC status, as well as a summary of alerts, incidents, and events.

"The GIS team had a full workload, so to have somebody that could dedicate time and energy to just this project and dive into all the little details [was invaluable]," says Drayton.

Satlof adds, "When we get the opportunity to work with a client that's really prepared and has a vision and is as excited as you are to do the project, that energy comes across, and it makes the project go better every single time."

The EOC team, which includes the policy group, strategic level decision-makers, and operational leadership, has been using the new collection of EOC dashboards since the fall of 2020. The dashboards have enhanced situational awareness, improved access to information, and helped streamline decision-making during every EOC activation since. The availability of timely data has enabled the EOC and its partners to maintain a common operating picture, according to Drayton.

"With much better real-time information, we now have a way to get everyone on the same page within just a few seconds," says Drayton. "It's allowed us to communicate more effectively because you can pull up the tool, let everyone take in the information to establish that operational picture, and then get straight into the strategies and tactics."

The improved situational awareness has also streamlined reporting. Situation reports are formal documents capturing specific details on the incident, and depending on the event, anywhere from one to three reports may be needed during each shift in the EOC. Previously, data was pulled from multiple locations by EOC staff to complete the report, but now, data sources are available in one place.

"Anything that can streamline this process [is helpful] because it's a heavy lift for our planning section staff to get all that information together, aggregate certain pieces of data, package it all into a report, and get it published in a timely manner," says Drayton. "This tool helps streamline that entire process. It really does help to maintain that common operating picture between shifts."

The real-time information has also streamlined decision-making for the EOC and Chapel Hill senior leadership. For example, Drayton says the town's ladder trucks can't run aerial operations with 35-mile-per-hour sustained winds, so having weather metrics at firefighters' fingertips has been very helpful. 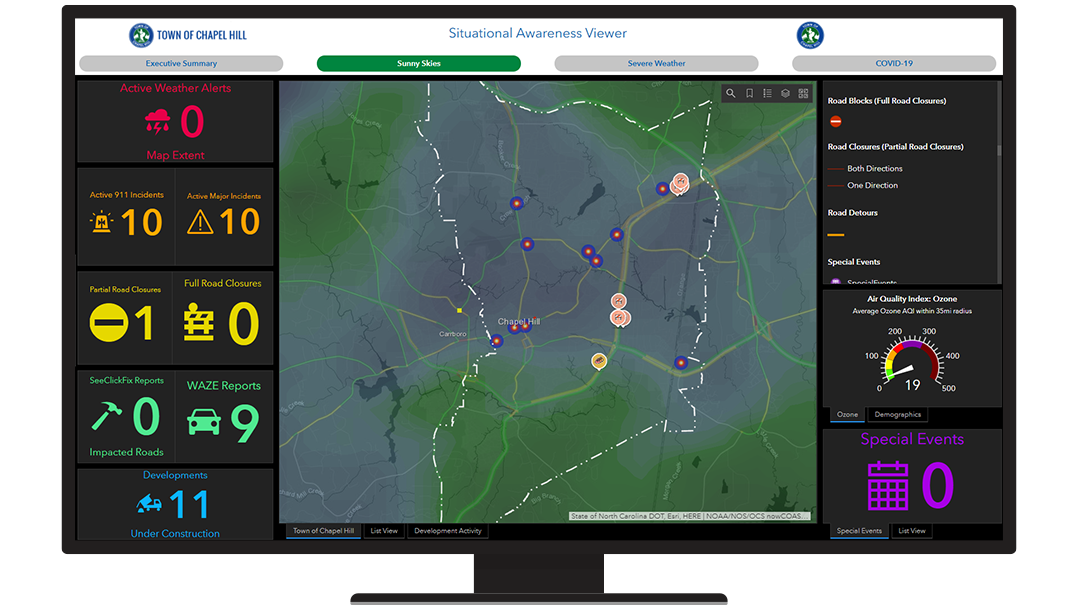 All of the dashboards are accessible from one place, including this dashboard which provides an overview of current weather conditions.

"From an emergency management perspective, information is vital. In the EOC, we manage resources, we manage consequences, and we manage information. But you're not really doing the first two without the latter," says Drayton. "So, this tool helps keep our policy team informed, helps get our operational leads the information they need and ensures we are making data-driven decisions and allows us to do it all more efficiently."

She adds, "It does a great job of simultaneously putting a ton of information in one place, aggregating it, and presenting it in a way that is easy to absorb in about 30 seconds."

As the leader of the team who developed the dashboards, Satlof enjoys the functionality of ArcGIS Dashboards, saying that it is easy to work with and customize.

"All of the work that Esri has been doing on these configurable platform applications has paid off, because just a couple of years ago, this would have been a custom development product. We'd still be in iteration one right now," says Satlof. "So, with the platform tools being at the very high state they're in, we can iterate quickly and have something ready for the client in just a few days." 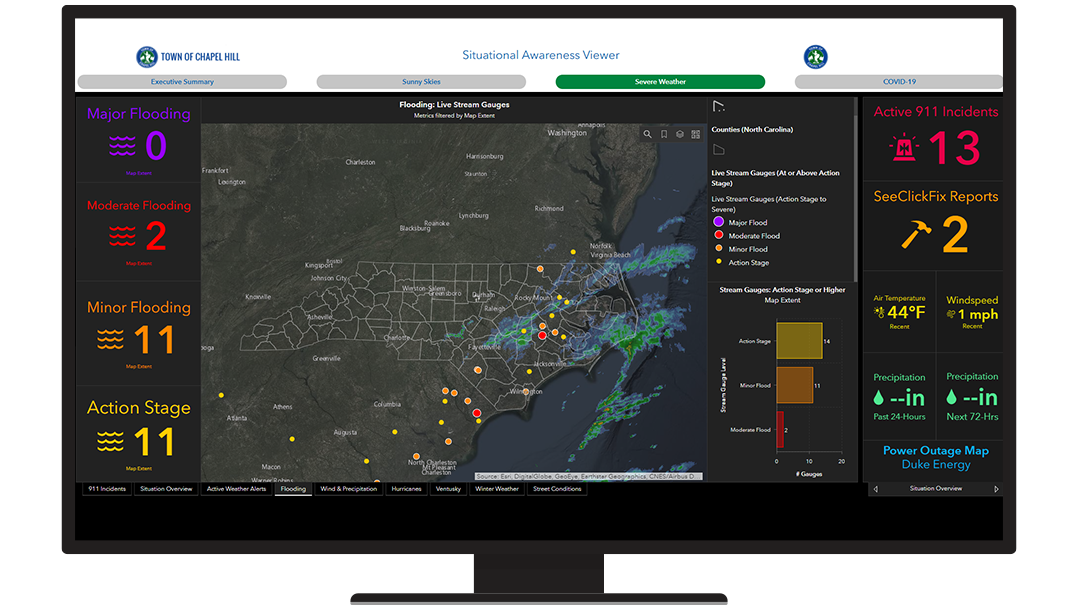 Almond is enthusiastic about how dashboards can help Chapel Hill in the future. The versatility of the new tool, which includes widgets, data, a data dictionary, and metrics, has given his team an example and proof of concept in terms of what's possible, he explains.

"As one of three GIS analysts, I have to champion the capabilities of GIS across town departments," says Almond. "[The success of dashboards] provides opportunities to leverage the enterprise GIS platform to integrate GIS solutions into workflows throughout the organization. I think it is just a huge achievement for all of us that we can build on moving forward."

From an emergency management perspective, everything is built on access to information. So, for me, this tool is like being in an information candy store—all of this beautifully packaged data that is ready to consume. And getting access to all the information in this way has enabled us to have a more strategic and efficient approach to incident management.

Get started with dashboards today