Accreditation is one aspect of delivering superior services. The model set forth by the Commission on Fire Accreditation International requires fire departments to foster an environment of continuous improvement and sets the fire department apart by affirming that it meets the highest standards of excellence.

As an additional layer of review, the Insurance Services Office (ISO) creates ratings for fire departments that calculate how well-equipped fire departments are to put out fires in a community. The City of Charlottesville has a Class 1 ISO rating, which is the highest ISO rating granted by this body. One requirement necessary to uphold this rating is an annual inspection of fire hydrants within the Charlottesville city limits and the University of Virginia.

Previously, inspections performed by firefighters consisted of a paper-based workflow that had those in the field manually taking notes, writing emails, and making calls to get repairs done, which was a time-consuming process. To more efficiently perform this inspection, the fire department implemented a new app designed for mobile workforces to collect data and complete assignments, streamlining the hydrant inspection process and giving stakeholders access to real-time information. 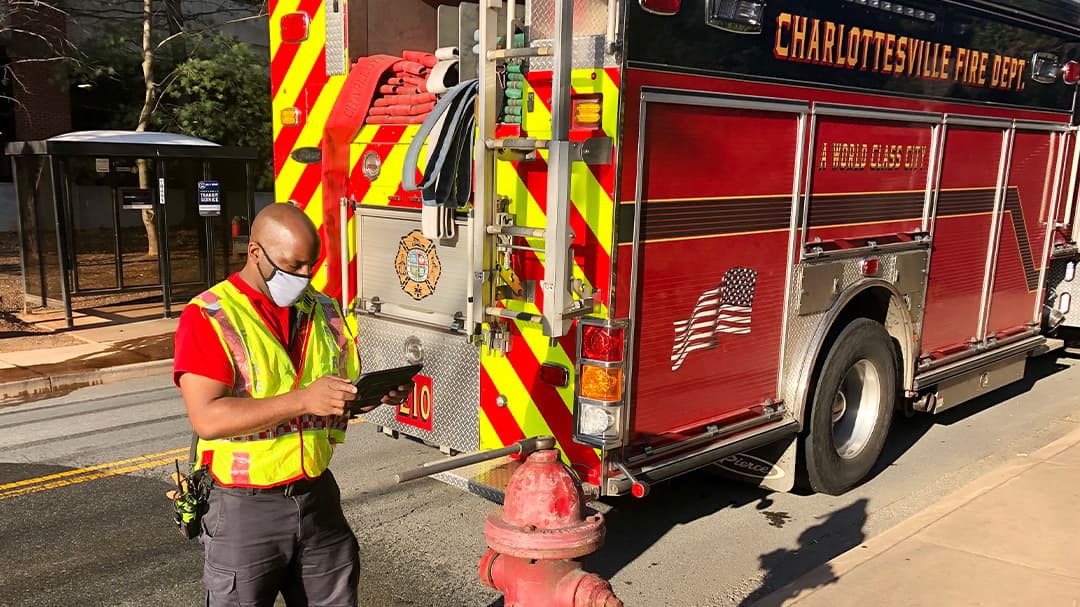 A firefighter performs a hydrant inspection using ArcGIS Field Maps on an iPad.

After the reorganization of the Charlottesville FD in summer 2020, Joe Powers, MPA, CFO, deputy chief of community risk reduction for the City of Charlottesville, began managing the department's ISO rating and the different requirements needed to maintain it, including fire hydrant inspections. The previous method for inspection was a manual process that involved firefighters printing a spreadsheet with a list of fire hydrant locations, inspecting the hydrants in the field, and recording findings on a piece of paper.

These findings would then be transferred to a form by the firefighter and emailed to the Charlottesville Public Works division, which maintains the fire hydrants. This would be followed up by a phone call from the firefighter to confirm any needed repairs. The public works department would then create a work order to complete the fixes. To move away from the manual inspection process, a digital hydrant inspections process was created in 2018 by Lucas Lyons, a systems performance analyst for Charlottesville FD, with a mobile data collection app. However, the app had limitations and didn't allow for advanced enhancements or features.

"The digital hydrant inspections process went okay, but users in the field were asking for developer-level requests. I found we quickly hit walls, and I became somewhat frustrated by the limited features within [the app]," says Lyons.

Also, the City of Charlottesville employs a spatial database to organize all the data in the city, but according to Lyons, user permissions were a challenging obstacle.

"We have a master hydrant point file, and I had no ability to edit that and neither did the firefighters. It kind of took some lobbying to get access to things like that. The database is just a legacy system. It's not very open and editable, making collaboration difficult," says Lyons.

With improvement needed in the digital inspection process, Powers began the search for a more efficient method that would save the firefighters valuable time and enable them to more expediently complete inspections. 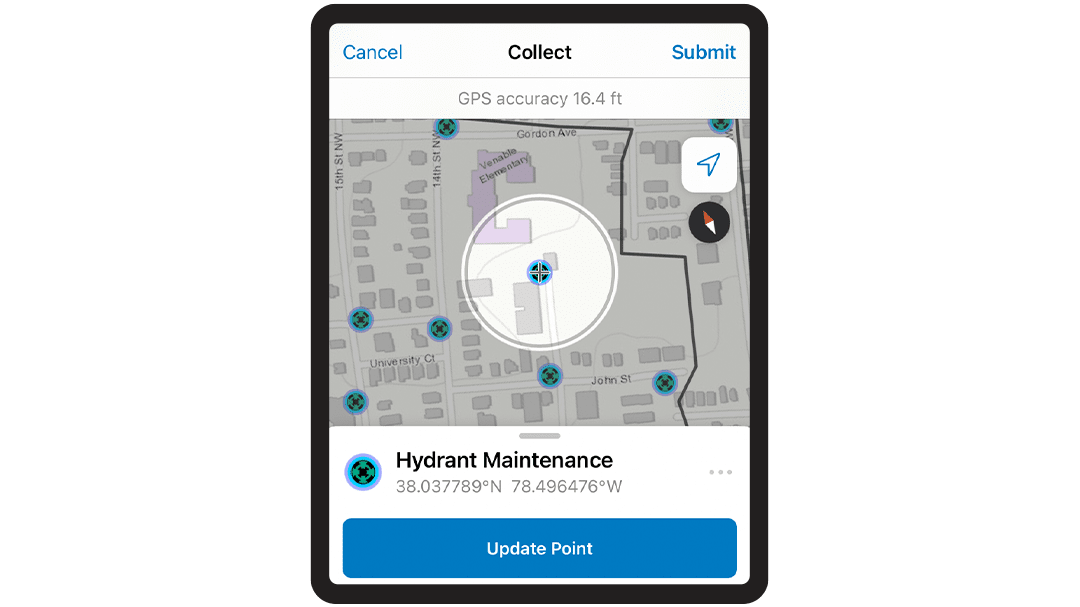 To establish an easy and efficient method that was simple for firefighters to use, Powers began working with Renee Bernstein, an Esri solution engineer, and Mike Cox, fire and emergency medical service (EMS) industry manager at Esri, who suggested testing a new product that would streamline hydrant inspection: ArcGIS Field Maps. ArcGIS Field Maps is an app designed to enable mobile workers to view their organization's digital maps, collect and edit data, and capture location tracks.

Powers wanted to tie the hydrant record with the inspection performed and move away from a paper-based process, so the combination of capabilities, like mobile data collection and editing, seemed to be exactly what they needed.

"We knew Charlottesville had obstacles it was trying to find solutions for. We also knew that Chief Powers and Lucas [Lyons] were pretty progressive and would . . . be good storytellers for the use of technology to improve day-to-day operations," says Cox. "So, it just seemed like a perfect fit for an early rollout of Field Maps to a fire department."

Bernstein adds, "I was learning from Chief Powers and Lucas [Lyons] that some users might not be as familiar with GIS or Esri, and they wanted a simplified process for that end user. When you can simplify everything you need into one application [like Field Maps], that's a huge thing."

Lyons created the solution with just a feature layer of the hydrants, and the app has inspections grouped by A, B, and C shifts and by unit, enabling firefighters to see what other shifts have completed. Lyons made it a priority to ensure all the work was divided equitably among each shift. Also, the zones are colored to provide quick information at a glance; for example, zones colored green include hydrants that have already been inspected.

"With Field Maps, you have a way to collect data without having to go through this whole process of [asking], Where should this data live? You just need to set up a feature layer, and you're good to go, and I like that," says Lyons. "I think we'll have more and better data in the future [by] having an application like this in users' hands."

After Powers and Lyons received some Field Maps training from Esri, Powers created a short three-minute training video, which he made with a teleconferencing service, to educate the firefighters on Field Maps. The video showed Lyons using the app and walking through a hydrant inspection, and the fire department's normal documentation for inspections was sent with it. Powers says the app was so straightforward, people were out inspecting hydrants using an iPad or mobile device the same day.

"I think it's a game changer for the fire service. It allows firefighters to record information and collect data [with one application], and it's what the fire department needs to be successful in collecting data," says Powers. 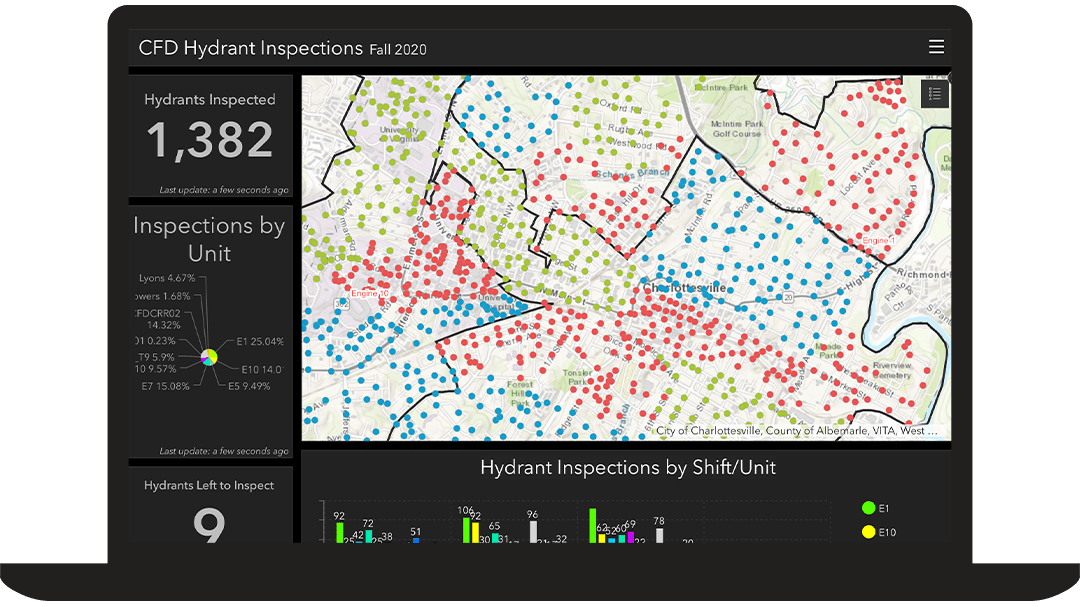 A dashboard is used to monitor the annual Fire Hydrant Inspections project status.

Since the successful implementation of Field Maps, the Charlottesville FD has plans to deploy it every year in May to inspect city fire hydrants. Charlottesville firefighters have been able to expediently inspect close to 1,300 fire hydrants even with schedule limitations, such as no inspections on weekends, and they only have 267 left. According to Powers, the streamlined process has helped to decrease the workload while still increasing productivity.

"Almost all of our fire departments have some sort of mobile technology, either in their pocket or in the front seat of a fire truck, and we can deploy Field Maps on those pieces of technology," says Powers. "And [firefighters are] done with collecting data before they get back to the station. We had the opportunity through Field Maps to refine our entire process and make it firefighter-friendly."

The simple deployment of Field Maps was an added benefit of using this all-in-one mobile work app. Lyons says Field Maps was a strong app to begin with, so they were confident they were launching a solution that would work.

"We made a few little tweaks to [the app] once we were out on the street testing hydrants. Then we deployed it to our firefighters, who were testing hydrants within hours, and there were very few questions. It's relatively simple," says Lyons.

The simplified digital inspections process has also saved valuable time for the firefighters, allowing them to perform other activities. Powers says the daily calendar of a firefighter is filled with everything from hazmat training to physical fitness and online training, and with the added responsibility of hydrant inspections, it takes them out of the firehouse and away from other tasks. Now, with a streamlined process, firefighters can more easily do the inspection and move on.

"From a staffing perspective, my fire trucks are not spending as much time on the street doing hydrant inspections because they're not writing it all down. They're doing it one time, and it's done. They can do other activities rather than sitting there doing emails, making phone calls, and scanning paper work," says Powers.

He adds, "When you say we're going to increase your productivity and save you time, it's almost a pipe dream. But with Field Maps and the hydrant inspections, that's exactly what we did."

The ability to visualize hydrant inspection data in real time and see where hydrants were being inspected, and by what crews and shifts, was another significant benefit. Seeing all completed inspections eliminated the duplication of work because it was easy to see work that had already been done. Lyons says building an online dashboard, which helps organize the information, was an intuitive process that only took an hour because of the reliable data. Previously, dashboards created with a different data visualization program took two to four hours.

"In the past, administrators and the crews didn't have that kind of insight. So, it was just when the last hydrant was inspected and that form was turned in, then the whole process was done. But now we can track in real time how that's happening using dashboards," says Lyons.

The real-time updates with Field Maps have also improved communications with Charlottesville Public Works. The data collected in Field Maps and the documentation of inspections are given to the public works department in real time, which allows staff to more quickly create work orders for repairs.

With the favorable deployment of Field Maps, the Charlottesville FD plans to expand its use, including tracking the installation of free smoke alarms through a city program. Powers believes that from an administrative level, team members have gained a huge amount of organizational equity because they saw the opportunity to improve an inefficient process for firefighters.

"One of the big benefits is the goodwill of our workforce who now believe in technology and see it can work. Whenever we can show a win and show that life is easier with technology, that's good, because that hasn't always been the case," says Lyons.

"ArcGIS Field Maps provides us an opportunity to track our productivity in a meaningful way."