Last year, almost 33 million passengers passed through Dublin Airport, located in Ireland’s capital city Dublin. It’s the busiest airport in Ireland and the 11th largest airport in the European Union. Operating since 1940, Dublin Airport, owned and managed by daa, is one-half of the busiest city route—Dublin to London—in Europe. Due to the COVID-19 pandemic, passenger numbers have dropped to an average of 12,000 a day compared to the peak of more than 100,000 a day.

Running an airport of this size and maintaining its assets and workflows is a huge endeavor. Not only must the airport keep data up-to-date for security reasons, it must also make data available to serve the needs of all the various groups in the airport.

In 2016, Morgan Crumlish was hired as spatial data systems manager to organize records and processes for the airport and its more than 3,000 employees.

“A lot of the main records were held by one person in the design team and he was completely overworked,” Crumlish said. At the time, the person was in charge of keeping track of all the computer-aided design (CAD) drawings of everything in the airport from aircraft design to electrical wirings. Add a busy, constantly expanding airport to the mix; and he was not only trying to keep up with the daily requests for CAD files from airport workers, but was also trying to make sure the primary files were updated in a timely manner.

Crumlish said: “He knew where everything was, and he had his own naming system for the files, and it suited him perfectly. However, if something were to happen to him, we’d be in trouble.”

Crumlish also discovered that employees were using and saving CAD drawings on their hard drives. Disparate CAD files spread across different departments meant that there was no single location for a common, shared view of the data.

Faced with tackling this huge set of data and making it easily accessible for all the airport’s workflows, Crumlish’s first step was to ensure the airport’s data met the standards of the European Aviation Safety Agency (EASA) for an upcoming audit. Crumlish knew the solution was to convert the CAD files into GIS layers as a way to maintain a single data source that was up-to-date and verifiable. Specifically, he had 921 CAD layers featuring all parts of the airport that had to be converted into GIS formats.

“There was a lot of CAD data out there,” he said. “We had to capture all the data and bring it into GIS.” Crumlish hired a contractor who helped redraw all of the 921 CAD layers of the airfield by re-surveying, mapping, and verifying the CAD information into 37 GIS layers.

The first step was to transform the way assets had been managed at Dublin Airport. Crumlish wanted to move from reactive management to more planned and predictive maintenance of data. To kick-start the enterprise asset management system, he needed to find a secure enterprise GIS system that Dublin Airport could build on and grow with.

Crumlish worked with Esri Ireland to set up an ArcGIS Enterprise deployment that would become the foundation for the airport’s GIS data and workflows.

The effort to convert the hundreds of CAD layers into GIS was manual and time-consuming. The goal was to eventually create one geodatabase of 37 GIS layers that would serve as the primary system of record, while a second geodatabase would be created for the operational layers where others in the airport could view and edit. In essence, Crumlish was publishing the GIS layers to ArcGIS Enterprise as feature services so multiple groups at the airport could interact with the accurate data at all times. 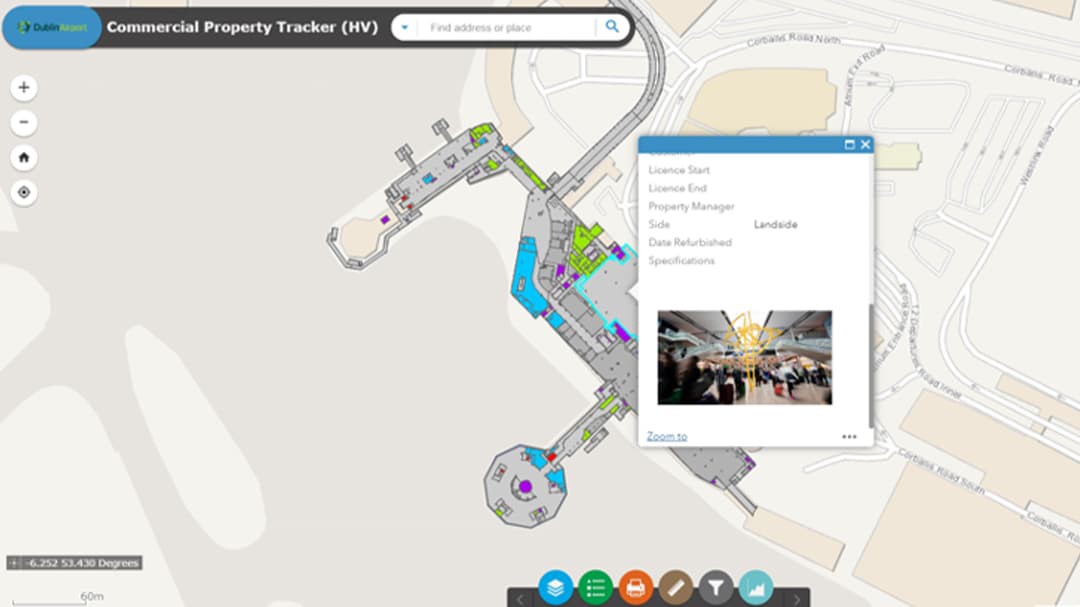 To adhere to strict data rules and security policies of operating an airport in Europe, Dublin Airport had to make sure that data was kept securely in-house, while allowing up to thousands of users, especially contractors working part-time at the airport, to access the data for on-going projects. Esri Ireland worked with Dublin Airport to architect a highly available ArcGIS Enterprise system that included a suite of ArcGIS applications for a wide range of workflows from airside safety to works coordination. High availability (HA) is the ability of a system to be continuously operating for a long time, while avoiding loss of service and minimizing planned downtime.

With an enterprise license agreement in hand, Dublin Airport was able to leverage the ArcGIS Enterprise platform to share data with multiple licensed viewers pinging the system for the same information. “Before, we had separate usernames and passwords, and that was far too cumbersome! Now we’ve got an Active Directory on Enterprise, and users can just log in with name and password,” Crumlish said. “We get updates on the maps and share from the ArcGIS Enterprise portal. People are using the same source of data for different projects. That used to be a nightmare before, but now it’s just seamless.”

Meanwhile, Crumlish knew the data effort would take about nine months to complete, and he wanted to keep the momentum on the GIS transformation going. He started introducing himself to groups around the airport. He said: “I saw that [transforming data management] was a massive project. So I wanted to get a couple of quick wins along the way. I did a show-and-tell around different departments at the airport to show what the new technology could do. I found some processes that I knew we could take onto the GIS platform.”

One of the first workflows Crumlish updated was the maintenance process. Using out-of-the-box Esri applications like ArcGIS Collector, ArcGIS Tracker, and ArcGIS Survey123, he was able to help the airfield maintenance crew develop a workflow in which their daily maintenance checks would be recorded, tracked, and built into reports. The maintenance workers inspected pavements around the airport and dropped pins using ArcGIS Collector, while ArcGIS Tracker will track their paths showing the area that was inspected. ArcGIS Survey123 captured details for each maintenance worker’s shift report, which was then automatically sent to the managers in a templated email using a webhook. A webhook is a mechanism that allows an app to provide other apps with event-driven information, so when an event happens on the trigger app—in this case the shift report in Survey123—the data from that event is sent as an email to the managers, who can immediately take appropriate actions.

As more teams around the airport saw what GIS could do, they started approaching Crumlish for help. One of these was the airside safety team, who needed to improve their paper-based and time-consuming process for reporting accidents. Such reports were manually collated in a Microsoft Excel document, which was then sent to various groups in the airport for follow-up. It was common to lose the report in an email or paper trail. Now, Survey123 captures all the required information and action in one app, while ArcGIS Dashboards displays the progress of each accident to the airfield management unit.

All these improvements could not have taken place without having a common view of the airport data.

Building out the GIS at Dublin Airport and creating an integrated asset view with ArcGIS Enterprise have provided the airport with a secure system of record, engagement, and insight. Security is key to Dublin Airport because of the sensitive data about terminals and airfields that needs to be stored in-house.

Crumlish said, “Everything is located in GIS now. We have one seamless map of the airport and the terminals, and if you wanted to see something in the airport, you don’t have any reason to design anything, you just get a link to the map.“ When teams used to meet to discuss projects around the airport, each person would bring along their own marked-up photocopied map, and often someone would forget to bring their version of the map. Combining everyone’s needs into a single view was difficult. These days, the teams simply call up the most up-to-date maps on ArcGIS Enterprise portal to kick off discussions.

Teams across the airport tap into the main file database to ensure that consistent maps are used for all projects. Those GIS maps are guaranteed to be up-to-date, said Crumlish, compared to siloed individual CAD drawings of the past. While aligning the CAD, building information modeling (BIM), and GIS standards, Crumlish described using CAD as the primary repository for information, but viewing and interrogating the data through GIS.

In four years, the core group behind these changes has grown in size and scope. Besides Crumlish, there are a BIM manager, a computer maintenance management system manager, and an IoT manager in what’s now called the Digital Information and Transformation team.

For its technology innovation efforts, Dublin Airport won Esri’s Special Achievement in GIS Award last year, and, with Esri Ireland, has been shortlisted for the Irish Logistics & Transport Awards 2020.

Getting the foundational ArcGIS Enterprise solution running was part of phase 1, said Crumlish. In the next phase, Dublin Airport is planning to deploy ArcGIS GeoEvent Server, ArcGIS GeoAnalytics Server, and ArcGIS Indoors. 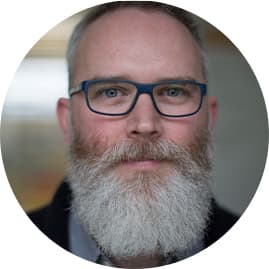 We get updates on the maps and share from the ArcGIS Enterprise portal. People are using the same source of data for different projects. That used to be a nightmare before, but now it’s just seamless.