Challenge
Digitize and standardize light rail corridor inspections in Sydney, Australia, and create reports for customers easily on the fly.

Results
Collect consistent data, save time in the field, and increase data quality for reporting.

The Inner West Light Rail (IWLR) line is located in the heart of Sydney, Australia. The 12.8-kilometer line runs predominantly in the corridor of a former freight railway line that began operating in 1855. The line was converted from goods to light rail in three stages, with light rail traffic first commencing along the line in 1997 and progressively traveling further west in 2000 and 2014. The line passes 23 aboveground and underground stations as it travels from Central Station in the Sydney Central Business District, past the tourist precinct of Darling Harbour, and out toward Dulwich Hill.

At first, staff used paper-based field forms and digital cameras to generate reports. However, the data collection process for these tasks could be cumbersome and time-consuming. In response, they implemented ArcGIS Survey123 for simplifying data collection and boosting productivity in the process.

The overhead wiring structures and sections of track slab that make up the IWLR line in Sydney require regular structural assessment. GHD Digital's Location Intelligence Group was commissioned to undertake the routine inspection in May 2019, with data from the previous inspection in 2015 supplied by the client as a point of reference.

The project required assessment of every individual overhead wiring structure and sections of track slabs in 3-meter intervals. To achieve this, inspections were to be undertaken by a team of field engineers over the course of a month. Each inspection period was often constrained by rail possession shutdowns, and data needed to be collected efficiently and consistently across the team.

Previously, inspections had been undertaken with pen and paper, and data was entered into a reporting template in Microsoft Excel or a similar program, which required copious amounts of data entry. This left the opportunity for transcription errors to arise. Photos would have been taken with a digital camera with no easy way to match photographs to the correct asset. Given that many of these assets look similar, confusion between matching photographs and assets was often an issue.

The challenge was to find an innovative mobile solution that would allow streamlined and consistent data capture across the field teams for inspections of the IWLR. The client required the inspection data to be delivered as individual PDF reports for each asset and section of track slab, so the group needed a solution to enable simple report generation with photos for issue to the client. 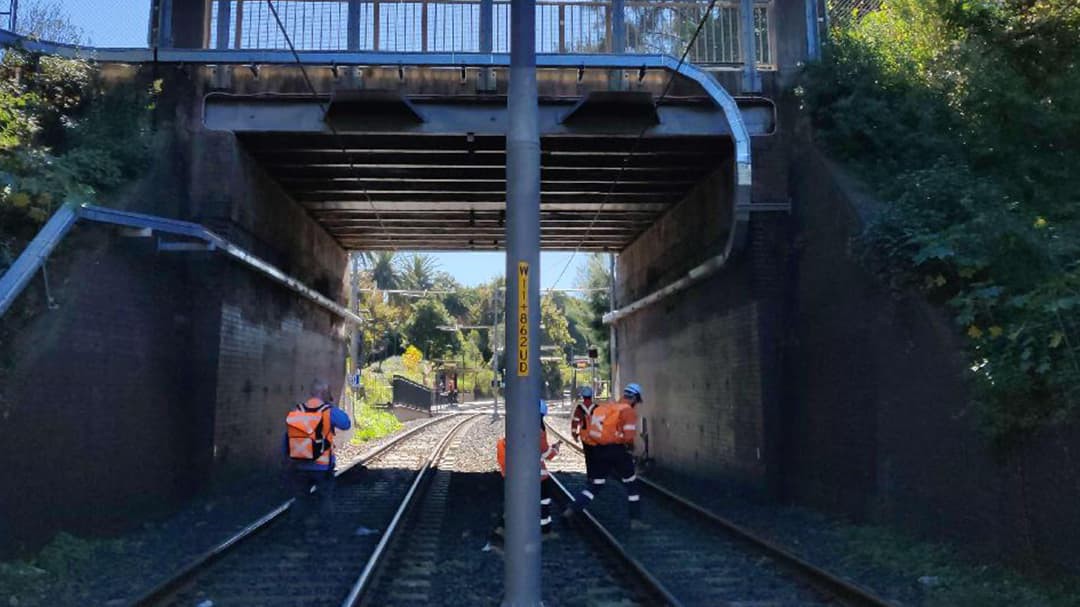 HD selected ArcGIS Survey123, a form-centric application for creating and distributing surveys and collecting data via the web or on mobile devices. Using Survey123, GHD Digital's Location Intelligence Group created two custom forms with features to ensure consistent data collection between teams and across inspection periods. One survey was created for the track slab assessment and another for the overhead wiring assessment, and each had feature-specific questions. Client-supplied information pertaining to each individual asset was prepopulated when the unique asset ID was selected from a drop-down menu in the form. After ID selection, the inspector was guided to take photographs with specified directions and make specific observations and assessments of the overhead wiring structure or track slab.

The team produced standardized yet highly detailed data by using a combination of drop-down menus to yield consistent responses as well as free response text sections to capture details that would have otherwise been lost. Images of reference tables were embedded into the survey form so the field team could quickly refer to the definition of repair priorities and other characteristics they were required to fill out. 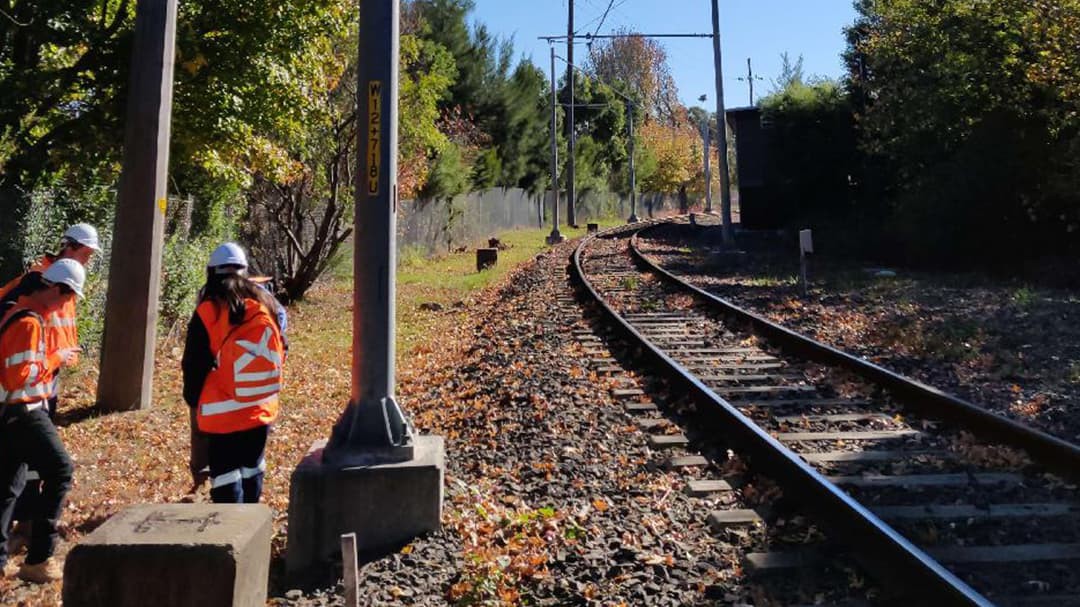 Members of the GHD field team easily adapted to the new method of field data capture. Relevant background information needed for assessments was prepopulated and easily accessible for users. It was clear to the field team which questions required responses and how to answer them appropriately.

Embedding images of the reference tables in the form also eliminated ambiguity or the need to flick between screens to make an assessment in line with a specific guideline. There was no limit to the number of defects that could be recorded for an asset, so inspectors could list out all problems with no issue, which was another benefit.

Drop-down menus and prepopulating data saved time in the field and facilitated consistent terminology in reporting. This would not have been possible had the data been collected with pen and paper.

Field data capture was enabled both on tablets and smartphones running the Survey123 mobile application. Some inspections were conducted in tunnels without mobile reception, and the ability of the form to function while offline was invaluable.

"Using Survey123 for data collection was significantly easier than collecting data manually for such a large area as being assessed in this case. It was helpful to be able to pre-program object types and intervals/nodes for data collection, to be able to collect data about discrete objects (individual wiring structures) and continuous objects (track intervals) using the one program," says Olivia Britt, a member of the GHD field team.

Further, these timesaving features also limited the exposure of the field team to the risks associated with mobile work in the light rail corridor. 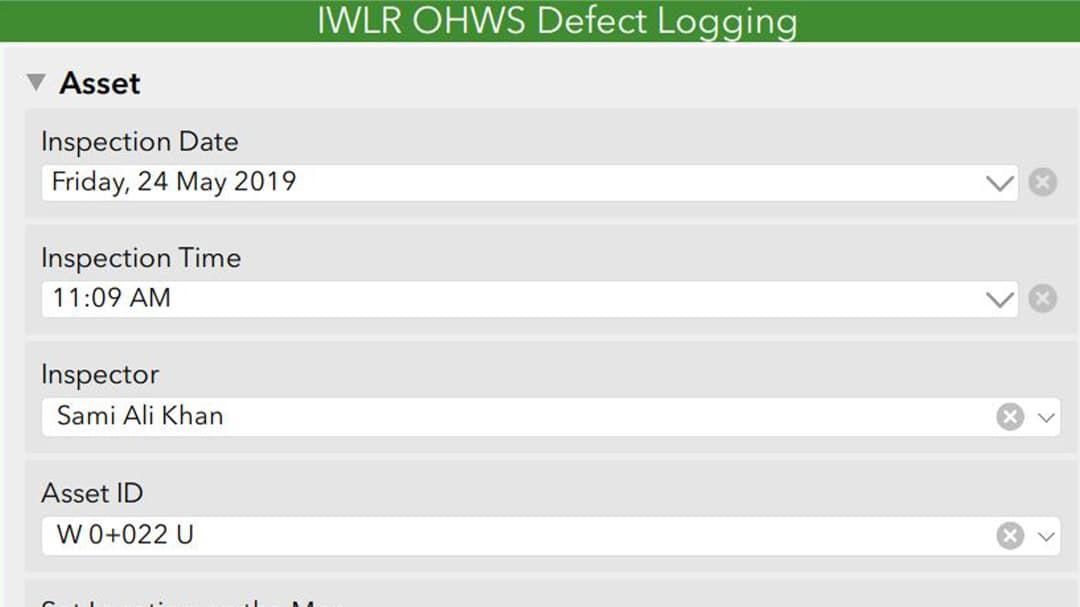 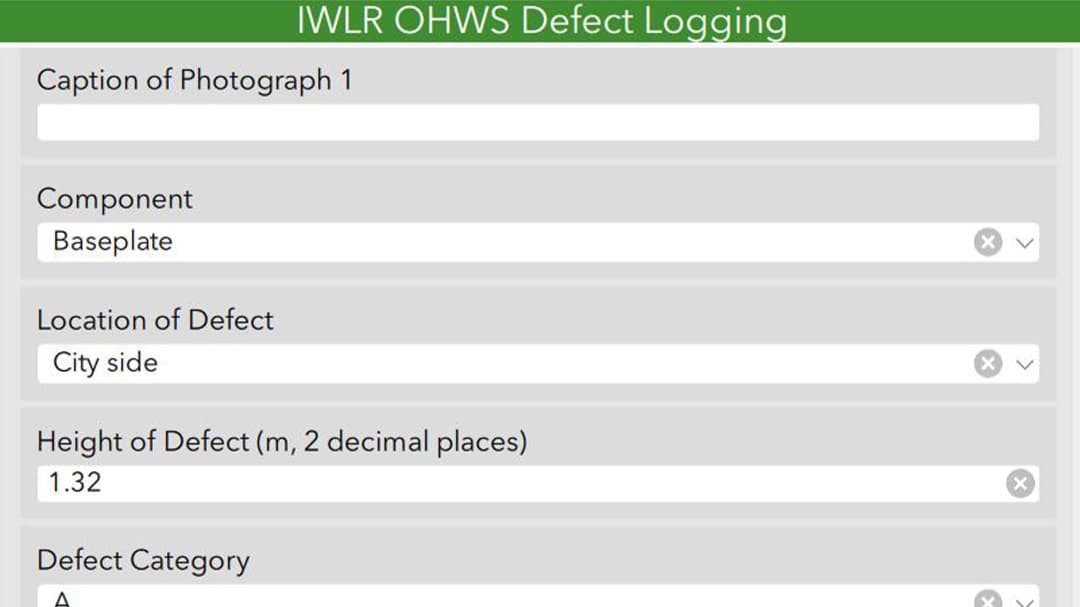 [The ability of] Survey123 to extract specific collected data and photographs and produce preformatted standard reports for each asset was a powerful feature, which produced quality reports and saved on reporting time.