With a population of over 4.4 million people, Maricopa County is Arizona's most populous county and the fourth most populous county in the United States. Keeping everything running in a county of this size requires collaboration and dedication across over 50 departments. Since David Moss joined the county as director of GIS Data Management in 2014, he has built a world-class geographic information system (GIS) team. The team supports these departments, from managing and maintaining data to streamlining analysis and creating both out-of-the-box and custom applications for a variety of uses. As a result of his IT and GIS leadership and services, Moss received the Local IT Leader of the Year award from StateScoop's 2020 LocalSmart Awards program for helping deliver a county schools COVID-19 dashboard in 2020. 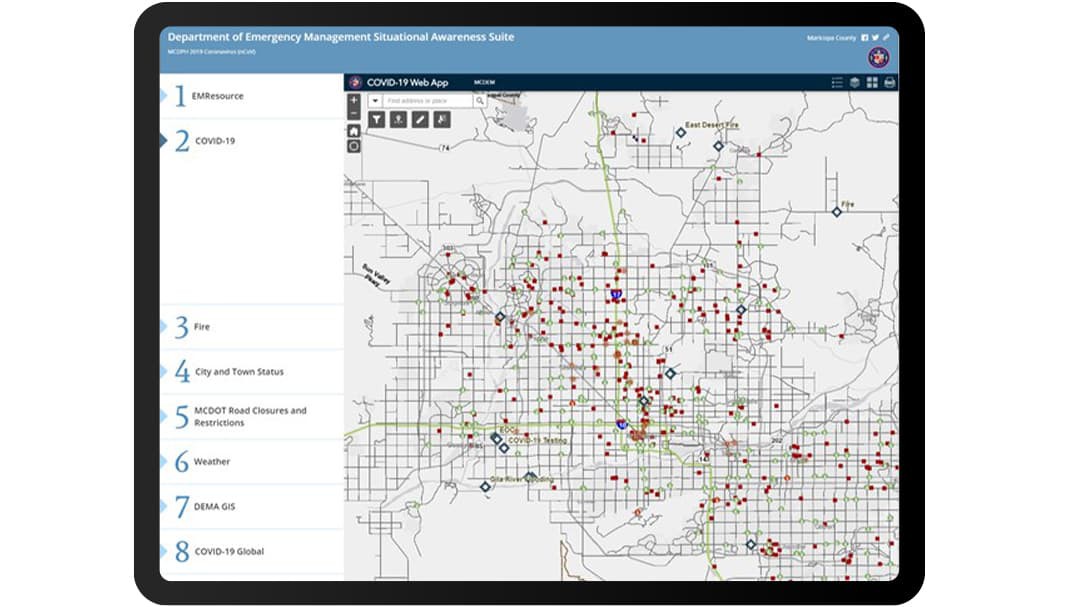 For years, data was managed by different groups all over the county with little collaboration between them.

Kacie Baker, GIS software architect, said: "Data was definitely siloed. Data was everywhere. There was no one source. Data was in many geodatabases, in many shapefiles, and in 17 different iterations on everybody's computer across the county. You never really knew which was authoritative or the newest at the time."

Data was also static and only updated quarterly, recalled GIS analyst Christopher Turner. Figuring out which data source to update was difficult because individuals edited and kept versions on different desktops.

Steve Hossack, now GIS software architect, was hired as a database administrator six and a half years ago. At the time, there was no enterprise geodatabase. File-based GIS data were managed as shapefiles in shared folders or Personal Geodatabases in Microsoft Access. Hossack said: "We did not have integration with other databases that hosted business data in nonspatial SQL Server tables. As a result, there was a lot of manual work involved to get data refreshed. Furthermore, we weren’t able to capture spatial data very well back then because data that were collected in the field were recorded on paper."

The pivotal moment came in 2014 when the county almost lost access to its data and servers. Director Moss learned that an employee in charge of GIS for regulatory agencies had left without sharing passwords or documentation. Moss said: "We didn't know how to get into the server, and we didn't know how to change it."

That's when Moss knew something had to be done. 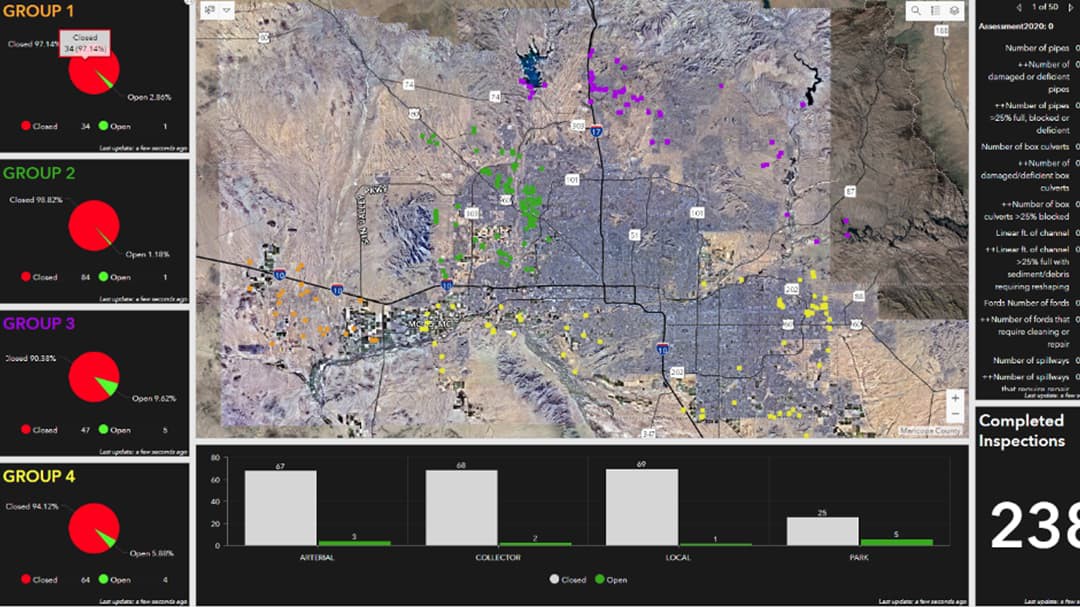 Maricopa County’s Department of Transportation (MCDOT) leverages a suite of Esri products, such as the dashboard pictured, to make informed decisions.

Challenge
The group wanted the ability to share key information with county citizens but had to contend with siloed data and disconnected departments using traditional paper-based workflows.

Results
Improved data management and workflows across departments resulted in increased efficiency and the ability to share important metrics with county citizens.

Moss managed to track down the right passwords and started implementing changes. As he worked to untangle the data and server, more and more GIS departments around the county joined his core GIS group, growing from 2 people to 18 in just eight months. Moss, who gained the trust of other GIS groups, credits Maricopa County for combining different GIS resources and the Geographic Information Officer's (GIO) office with energizing the team and giving it the resources needed to succeed.

The first step was a complete redesign of the system. Maricopa County established an enterprise license agreement with Esri to move from physical machines to virtual machines (VMs) using ArcGIS Enterprise. Rebuilding from scratch allowed Maricopa County to plan, making sure there would be capacity when and if needed.

Maricopa County is now running 200 VMs. Baker said: "As ArcGIS Enterprise evolved and added more technology and features, we tried to evolve with it and make plans, whether we were using it or not. Our big thing was just trying to plan for the possibility of what we could be using it for." The county now has different setups for different uses, from single-machine deployments to 12 multimachine deployments to support high availability.

Having a robust ArcGIS Enterprise architecture transformed data management at Maricopa County. Being able to consolidate the data and serve up real-time views of the data improved workflows drastically.

Hossack said: "I'd say the biggest thing is better data management, better data accuracy, and the timeliness of data. As soon as changes are made in the field, it shows up on the map that everybody sees the next day instead of the next quarter."

Key allies in the county immediately understood the value of GIS, including Barbara Ritter, asset program supervisor from the Maricopa County Department of Transportation (MCDOT), one of the first high-level decision-makers to push through collaborative projects. In the past, GIS data was independently held in groups across the department, making it hard to share. But MCDOT worked with Moss's team to create a road information tool using one of Esri's application builders, ArcGIS Web AppBuilder. The one-stop location for all transportation asset data allows users to easily open a browser wherever they are to view up-to-date information.

The success of the MCDOT app proved that enterprise GIS was more than just asset management. More and more departments around the county wanted to utilize GIS. MCDOT's implementation of GIS technology spurred other groups such as flood control to reach out to Moss's team to help improve their processes.

When COVID-19 struck, Maricopa County quickly reacted to community needs around the pandemic through its enterprise system.

GIS analyst Shiloh Johnson said: "If we didn't have the technological infrastructure, and if we weren't centralized, we would not have been able to respond in the way we did." The GIS Data Management team immediately tackled the challenges the pandemic brought to the county. Using ArcGIS Workforce, ArcGIS Web AppBuilder, ArcGIS StoryMaps, and other Esri products, the team created various apps. One app helped bus drivers find rest stops during business closures. Another app monitored vulnerable populations living in low-income areas and those experiencing homelessness living in encampments. This app helped determine where to house those who tested positive for COVID-19. And another app helped organize county employees to deliver personal protective equipment (PPE) to medical professionals.

Non-COVID-19 workflows were also possible with enterprise GIS. Sheldon Lessard, GIS UX developer, shared the county's find-a-pet app that combines data from animal care and control with public data entered by the community when animals are found. This real-time app includes pet ID numbers and a prototype for social media integration, which helps the community track and find lost pets. Lessard said that the find-a-pet app was modified for Maricopa County's Ready, Set, Go! app for possible evacuations related to public safety threats other than COVID-19. 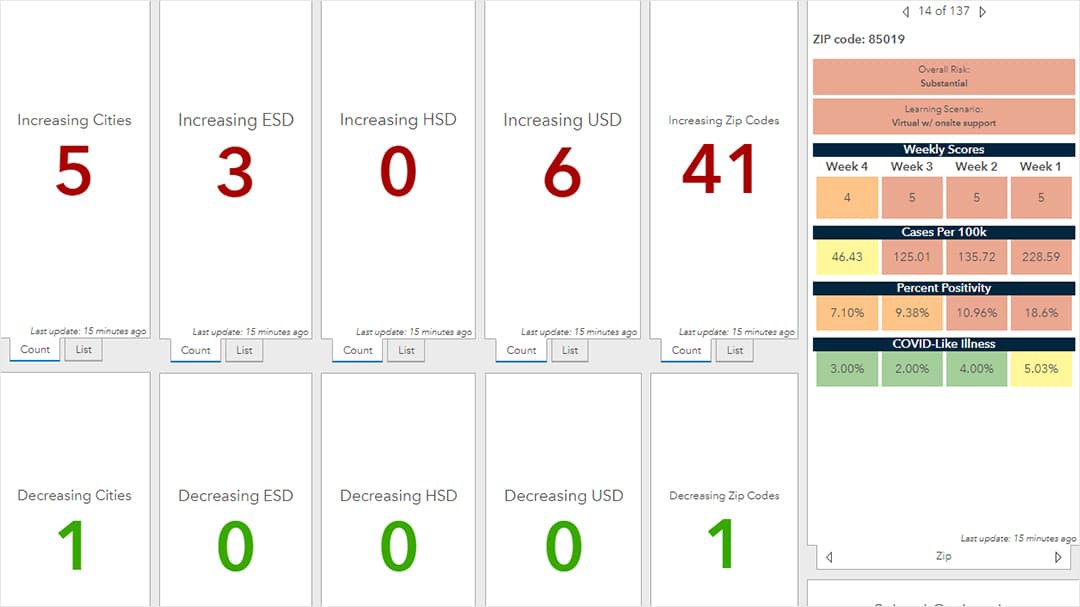 With a centralized infrastructure and an enterprise data management system in place, Maricopa County has streamlined how users interact with the data and allowed internal stakeholders to easily leverage the powerful enterprise GIS for their workflows.

People used to email Johnson for up-to-date zoning data, and she had to spend time emailing everyone back with that data. Johnson said: "I just take my zoning data and it goes into our enterprise system. Anyone who wants zoning data just gets it from there. Nobody needs to come to me. It's available to whoever needs to use it."

When Baker started in the county in 2006, the team was using ArcView 3.2 and ARC/INFO Workstation 6. Her job at the time was to manually match addresses to parcels, without geocoding as an available solution. "It was my job, day in and day out for hundreds and thousands of points," she said. "Today we can do that in two minutes. Instead of spending all day looking at a dot, I am able to build six apps in a day if I needed to."

The quick turnaround from concept to mock-up of an app idea was on display during a stressful time early in the COVID-19 pandemic, Johnson recalled one night when she was working on a PPE distribution project. The county public health subject matter experts told her about their challenge in tracking COVID-19 cases and disseminating information to the schools. In a day, Johnson, along with Moss, Hossack, Baker, and Lessard, was able to create a dashboard using ArcGIS Dashboards to show the doctors what can be done to track positive and negative tests as well as show probable cases all over the county. That dashboard with school metrics continues to be used by Maricopa County citizens and is updated every Thursday by public health officials.

Hossack said: "We can build rapid prototypes or proof of concepts and get customers to look at what we’re capable of achieving real quick. It's easy to throw together these apps without writing a single line of code."

For Turner, ArcGIS Enterprise has allowed users and colleagues who are not familiar with GIS to see the value in it. Turner said he can now share data that the team has been managing for years with other county users who are now empowered to use and query the data without running the risk of changing any of the authoritative data.

Moss said: "[ArcGIS Enterprise] has allowed my team members to focus on the important things. Before, we were really into managing the infrastructure. Now, with the advancement in the tools, it's allowed them to excel in the areas they are all strong in. Before, I had to sell the concept of GIS. Now what I'm selling is, 'Hey, we can help you do your job faster.' " 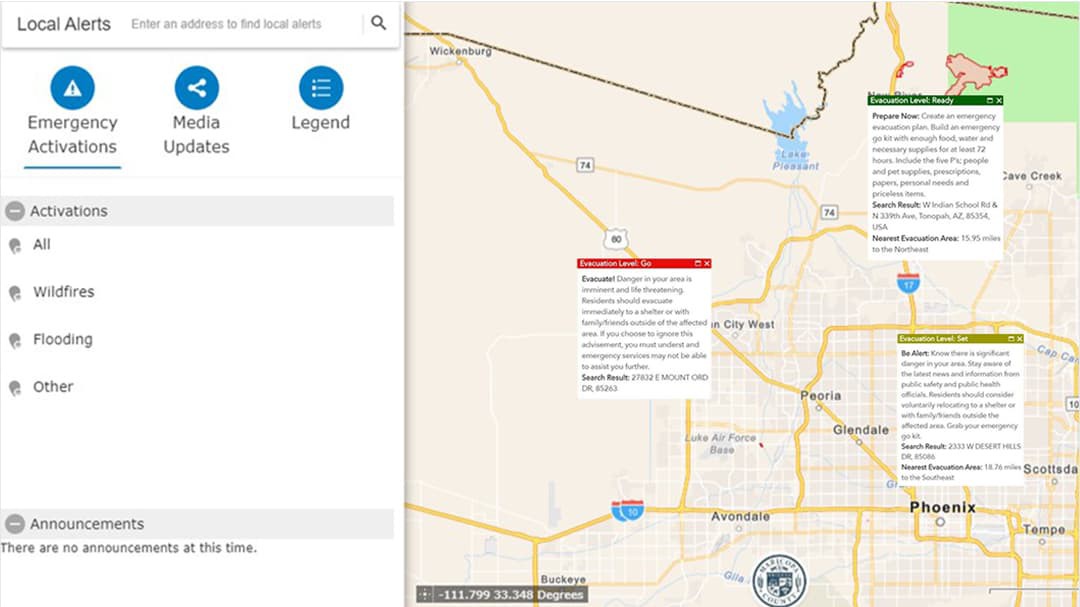 The Maricopa County Emergency Information Map provides the public with up to date information for County emergencies such as wildfires and floods.
opens in new window