Sky Harbor Airport in Duluth, Minnesota, opened in 1939. Located on Minnesota Point, one of the largest baymouth bars in the world, the area is a natural wonder, home to several protected species. In 2007, the Duluth Airport Authority and Minnesota Department of Transportation identified several obstructions to the airport runway's approach surface, including an old-growth pine forest. At possible risk of losing its license, the airport enlisted the help of Short Elliott Hendrickson Inc. (SEH) to conduct an environmental assessment prior to construction and planning to help preserve the area's natural resources and manage any environmental impacts.

SEH is a multidisciplinary, employee-owned consulting firm comprised of engineers, planners, scientists, and architects that share a core purpose: Building a Better World for All of Us®. The firm's engineering services are intended to help ensure holistic designs, renew infrastructure, engineer clean water, and deliver efficient building plans to government and public sector clients.

After SEH conducted the initial environmental assessment and received the necessary approvals, the firm was selected to lead all aspects of airport planning, environmental review, design, and construction, in partnership with several local and federal agencies including the Federal Aviation Administration and the Minnesota Department of Natural Resources.

The project, which would involve a great deal of construction to ultimately relocate the runway, involved the delivery of large amounts of fill material. To pay contractors who delivered the materials to the project site, SEH needed a solution that would allow staff to track quantities and the volume of incoming shipments. SEH team members turned to drones. After launching drones to help them get a more complete picture from the air, they would then use cloud-based drone mapping software to collect and analyze the footage. 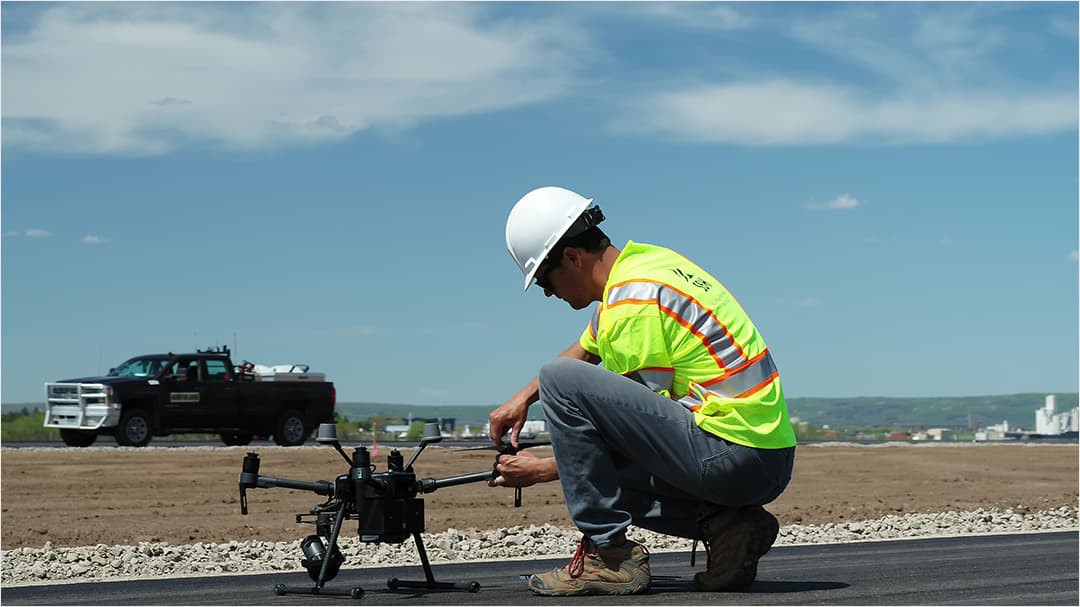 SEH needed to fill 7 acres of open water on Lake Superior in order to relocate the runway of Sky Harbor Airport in Duluth, MN to preserve the area's natural resources

According to Brandon Twedt, who led both the engineering and the unmanned aircraft systems (UAS) operations, the runway relocation project was unique because it filled in seven acres of open water. The SEH team analyzed many different designs and construction methods and ultimately decided to transport materials by barge to the site from the water to limit disruptions to the city. Traditionally, truck drivers would issue a tonnage ticket to site planners on a project that required material delivery, which is how contractors would receive payment. However, Twedt says they were unable to use traditional methods because the raw materials were loaded directly onto the floating barges, and the entire barge could not be easily weighed.

SEH developed a system to efficiently track material costs and quantities of the ongoing delivery of materials. Approximately 200,000 tons of materials were delivered using barges, so it was important for SEH to measure the quantities during transport and on arrival to compare the figures and make sure the appropriate amount was received. This helped produce accurate documentation to quantify material volumes for accurate payments to contractors.

SEH also needed a better way to conduct inspections on the water's floating silt curtain, which acts as a fence to prevent contaminants from entering into the clean water of the bay. The contractor positioned the silt curtain in the water, and Twedt was required to inspect it to ensure it was effective. Manual inspection by boat was not feasible, so Twedt found a solution to make the inspection possible.

"I needed a visual perspective from the air, top-down, to see what was going on and make sure I was inspecting this curtain. The US Army Corps of Engineers and the [Minnesota] Pollution Control Agency relied on me to make sure that our project was contained," says Twedt. 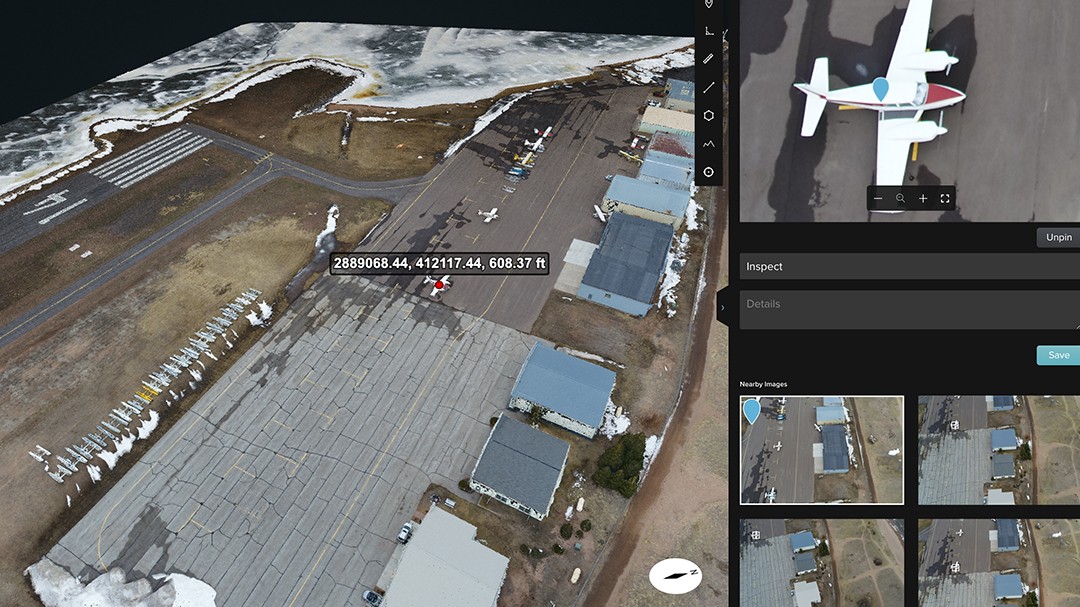 As Twedt and SEH set out to find a comprehensive solution to gain aerial coverage of the project site, he began considering the use of drone technology. According to Twedt, he knew that drone technology would enable him to get a bird's-eye view of the silt curtain with a picture from the sky. Measuring other project activities would also be possible with drones, such as how the grading activities were progressing. Aerial imagery also helped the team view the materials being delivered to the site.

Twedt selected Site Scan for ArcGIS for data collection because it's a cloud-based solution that provides a complete, end-to-end workflow for acquiring and processing drone imagery. He explains that when runway construction began in 2017, SEH used a mapping platform for site monitoring using a single tower computer to process data locally. The inefficiency in this process led Twedt to Site Scan, a cloud-based solution, where all data and imagery can be stored and hosted.

"[The current process was] not really efficient. We had a computer tied up for 12 hours sometimes. We understood the need to have a cloud-based solution like Site Scan," Twedt says. "We can't buy 10 big tower computers. It's just too much infrastructure to maintain from an IT perspective. So, as we grow and our UAS industry grows, and [with] the possibility that we're going to have multiple projects across multiple states, we turned to Site Scan."

SEH began using Site Scan in the first phase of the project from 2017 to 2018. The drone-captured imagery helped SEH team members share data, such as a graphic made from imagery to share with the public, and the fleet management capability in Site Scan also helped them track the battery usage and life for each of their drones. The SEH team also brought in data and images to CAD software for analysis, which helped Twedt understand how the project was progressing and how volumes are moving. 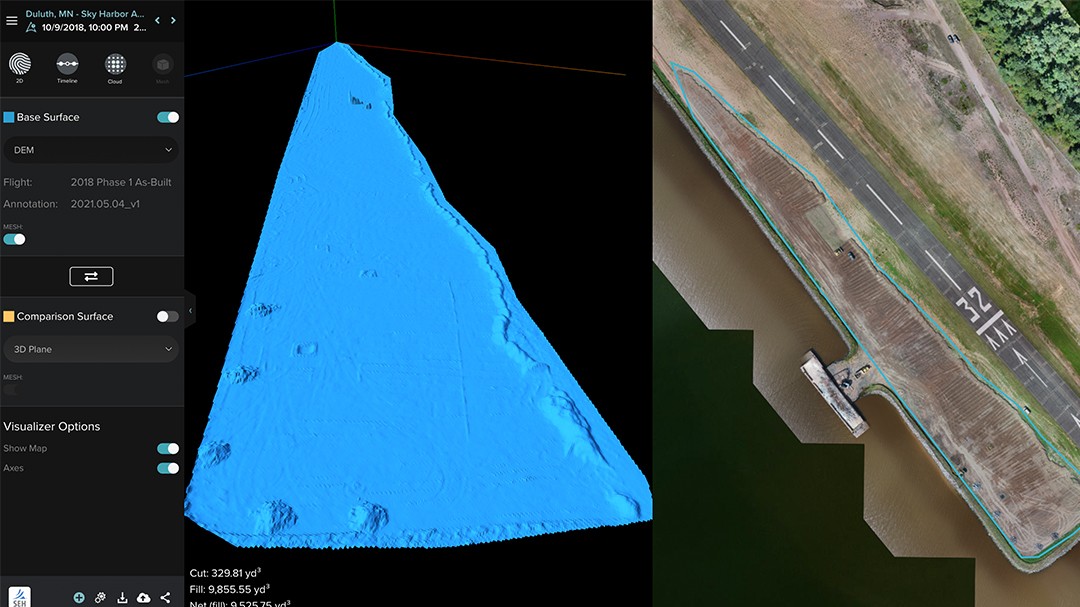 "I used drone 3D modeling to produce that volumetric calculation that the contractor ultimately relied on us to verify. It was implemented that way to get the verification for contractors' quantities that they submit to us," says Twedt.

Using Site Scan also helped Twedt more quickly and accurately take measurements of things like land, buildings, and pavements. Previously, team members would take a wheel, walk through the site, and obtain measurements and survey the ground manually, which was time-consuming, particularly on large projects such as this one. Now, they can click a few buttons and get a measurement on the cloud, with repeatable documentation for exactly where the measurement was made. 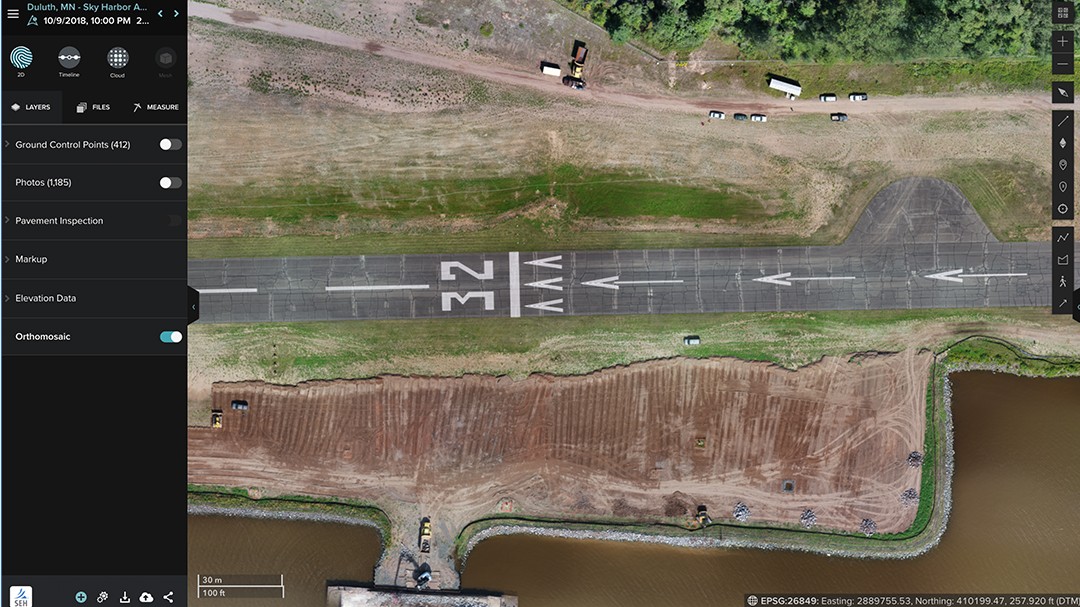 "Those are things we can do in a fourth of the time now using two-dimensional aerials. Having a fast, efficient tool to get in the air and take those measurements on a weekly basis, whatever frequency, was very valuable and saved me a lot of steps," says Twedt. "Through this project, I was able to identify why drones are so important and why having an efficient tool like Site Scan is valuable."

Another notable benefit of Site Scan is improved flight planning. Site Scan easily enables Twedt to set up the flight plan ahead of time in the office, using the Site Scan for ArcGIS Manager web app. He can then deploy that plan to an available pilot. Previously, Twedt says this was impossible, and he would have to take screen captures of the area to cover. Data can now be shared on the cloud and pushed out to pilots.

"Using a different flight app, it's challenging for us to do flight planning. This functionality was critical because there were times when I couldn't travel to the project site. This airport project was about three hours away from my house and office," says Twedt. "When I needed to deploy somebody else to fly the missions, I could make the flight plan from my home and have them fly that exact flight for me the next day."

The capability of Site Scan to enable users to repeat flight plans was another reason why it was beneficial on this project, according to Twedt, and another benefit of using a cloud-based platform.

"I can make one flight plan. It's always on the cloud and stored for us to use. I can come back the next month and fly the exact same thing so that when I compare the two over time, it's apples to apples," says Twedt. "Other types of flight apps potentially don't give you that option to repeat something as well as Site Scan does."

Airport construction was conducted in three phases, and for Twedt, creating a flight plan that was consistent throughout each phase was crucial to track costs and quantity of materials.

"It helped when I compared phase three to phase one. I'm confident that I analyzed the exact same footprint. The drone settings, such as altitude, are also very important. All of those parameters affect the results of the data you get from drones," says Twedt.

During construction, the drone imagery also helped keep stakeholders better informed. At weekly construction meetings, stakeholders would discuss the progress of the project and any challenges, and the SEH team was able to show updated 2D aerial shots to the group. Twedt says looking at a live view of the previous day's flight was valuable because everyone could see in real time what they were discussing and what problems had to be solved.

The website URL of the aerial image could be sent as the project progressed to government agencies or other stakeholders so they could view any developments on the site. According to Twedt, clients have been very pleased with Site Scan and the real-time views they can now enjoy. He has already started applying this to an array of industries and projects, including mining and land development, with successful results.

"As the industry expands and drones are getting better, I'm most excited that drone cameras are improving, and the drones are flying longer. We're going to be able to provide our clients with more data in less time," says Twedt.

With Site Scan for ArcGIS, we're able to deliver more projects now. We now have the capabilities to grow substantially through cloud-based flight planning and drone processing. Our newfound efficiency opened us up to grow.