An estimated 9.2 percent of the world's population—689 million people—lives in extreme poverty on less than US$1.90 a day, according to the World Bank. The Global CHE Network (GCN) is an association of people and organizations using the strategy of Community Health Evangelism (CHE) to serve impoverished communities around the world. The Global CHE Network provides education and resources to hundreds of organizations in thousands of communities in 154 countries.

GCN offers its members around 16,000 lesson plans to use while working with communities around the world. The lesson plans cover a range of topics for users to learn about different subjects and teach them, including drinking water sanitization, good hygiene, disease prevention, kitchen gardens, animal husbandry, education for children, and women's empowerment. To improve accessibility to lessons, which were stored on a shared drive, GCN recruited Bay Park Data Solutions to create a mobile application to distribute lessons to development workers.

"We needed the app for the empowerment of workers in the field for the transformation of lives, families, and communities as well as for gathering pictures and stories that validate the impact of our work for donors and other stakeholders," says Terry Dalrymple, founder and coordinator of Global CHE Network.

Bay Park Data Solutions is a firm that provides geographic information system (GIS) services to nonprofit organizations. The firm, led by founder and CEO Martha Rodgers, implemented a low-code platform for producing native apps to help create a new app that hosts some of these lessons. This enabled the firm to provide a fully customized and branded app to improve the accessibility for GCN members.

GCN stores its lesson plans online in the cloud. A team of GCN researchers and experienced practitioners receive requests from mobile workers for information on specific issues that arise in the course of their work. The team identifies best practices and creates lesson plans and manuals, empowering workers around the world to address these issues when they surface.

"For the poor in the villages, these lessons empower communities to sanitize drinking water, increase agricultural production, prevent disease, create business opportunities, and provide education for the children," explains Dalrymple.

Before the app was created, these lessons were distributed on USB drives through member organizations. While the use of the USB drives eventually provided powerful resources, their distribution was slow and iterative, and GCN researchers could not track usage. As such, the firm set out to create a mobile app.

Develop a custom branded mobile solution for the Global CHE Network to efficiently distribute lesson plans to members who are working with impoverished communities around the world.

Global CHE Network mobile app, a native solution that can be downloaded from app stores, allows users to request and download lesson plans and share their experiences in their location anywhere in the world.

An app would give researchers the ability to gather analytic information such as who is using the lesson plans and where and how often they are being downloaded. This helps researchers determine how useful the lesson plans are, how to prioritize each lesson, and how far-reaching the impact of the users' work is.

"The analytics are also important for demonstrating the extent of the work being done to stakeholders and donors. The reason for the existence of the network is to strengthen individual projects and expand the movement," says Dalrymple. "The number of downloads and locations may help us to identify trends in the field and to tailor our efforts to meet the existing challenges."

Also, GCN wanted a branded app that was easily recognizable by its many members. This would make it simple for users to find it through app stores.

The Global CHE Network approached Bay Park Data Solutions for assistance in developing the mobile app. Rodgers told the GCN that it is possible to develop a native mobile application—available for Android and Apple—for users in any part of the world, which was perfect for GCN's worldwide reach. Rodgers knew ArcGIS AppStudio would be best for developing the project.

ArcGIS AppStudio is a low-code app that helps creators and GIS professionals design user-friendly mobile apps that work on every platform. GCN wanted a branded app with some survey elements, which Rodgers says is precisely what AppStudio would be good at providing. She adds that the ease of creating a native app without a lot of programming also made AppStudio the ideal choice.

"I have a little bit of programming experience. But I'm not a real guru, nor do I have the time to be developing something from scratch. So AppStudio was the perfect answer," says Rodgers. "It was easy to develop and relatively easy to get deployed onto the app stores. So it was super exciting."

GCN decided to include only 100 lessons rather than all 16,000 lessons in the app to develop a proof of concept. The development process for the app began with meetings between Bay Park Data Solutions and GCN to determine what to include on the app. Rodgers says there also was extensive testing to make the app "super user-friendly," which was essential because the users have all different levels of technical ability.

The newly developed app includes GCN's branding as well as a survey using ArcGIS Survey123, making it a custom Survey123 app. Survey123 is a formcentric app for creating and sharing surveys. Seamless integration with ArcGIS technology such as Survey123 established AppStudio as ideal for this project. 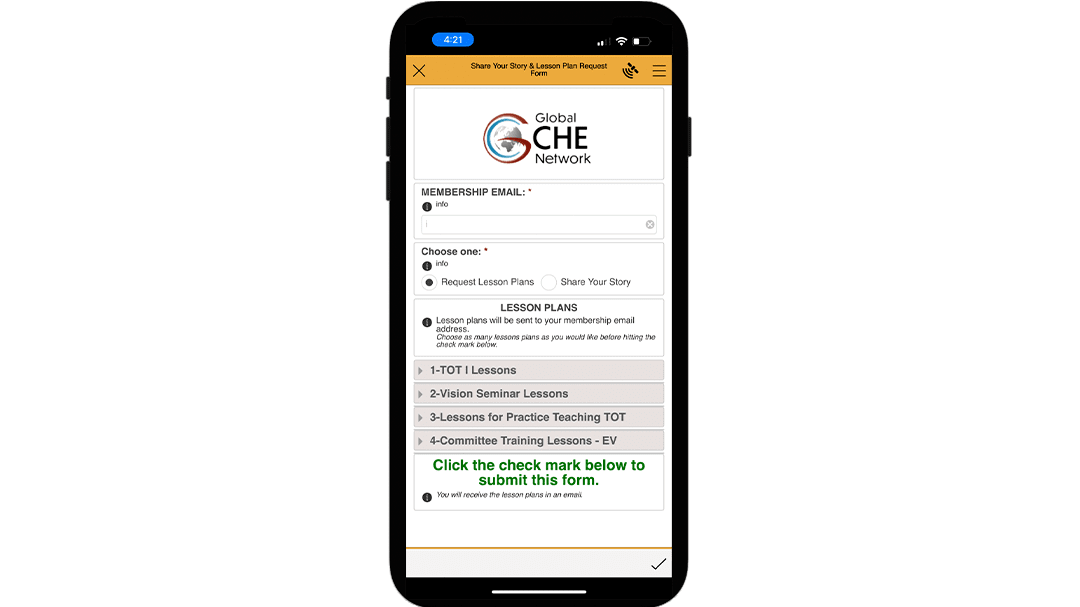 The Global CHE Network app has two sections. One section contains the 100 lesson plans, and users can select as many as they want by simply checking the box next to each lesson. Users then receive an email with any requested lesson plans, which can be downloaded to their device. Rodgers says users can go back at any time to request additional lessons.

The second section allows users to share a personal story about their work—for example, building simple and portable filters to make clean water accessible. This part of the app lets users submit a photo along with their story and the name of their village. Rodgers says the published stories will be put on a map, accessible only to members, to allow members to learn from each other and see what others are doing around the world.

"The app gives us the ability for [members] to request and receive material they need to help communities assess their problems, identify causes, and create solutions using local resources," says Dalrymple. 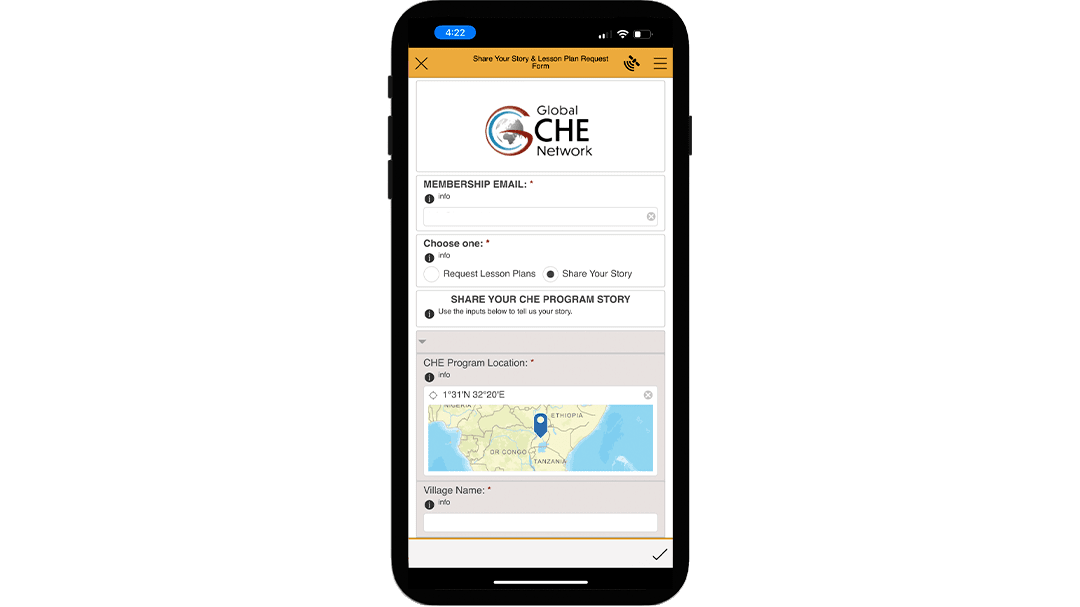 Users have the ability to select a location on the map to share a success story with other Global CHE Network members.

The Global CHE Network app, which rolled out in fall 2021 and is steadily growing in use, has allowed GCN to better track its lessons and offer its members a simplified user experience. The app will ultimately deliver as many as 16,000 different lessons to 4,000 workers across the world.

"The app will allow us to deliver vital lesson plan material in real time directly to the hands of workers in remote places. Very few of these workers have computers or laptops," says Dalrymple. "However, everyone has smartphones, and this gives them access they would not otherwise have, empowering them to teach and facilitate development in real time."

To track lesson usage, users log in to the app with their membership email and then proceed to request downloadable lessons. This lets the team see what lessons are most popular, who is downloading them and where, and how often the lessons are being used.

Rodgers says AppStudio made the development of the Global CHE Network app more efficient because AppStudio is easy to use. She says the templates in AppStudio were perfect because she didn't need to build anything from scratch, and getting the new app ready to go into the app stores was very easy.

"You can customize a lot of the code in AppStudio without being a programming whiz, and AppStudio is really robust," says Rodgers. "As I get more used to it, I've been changing more of the code, which is nice that it is so user-friendly."

She adds, "It's perfect for me because I love programming and I love being a developer, but I don't have the time to develop an app from scratch."

Branding the new Global CHE Network app and customizing it to fit the team's needs was also simple with AppStudio. One example is Rodgers' work on the text. Since the app is integrated with a Survey123 survey, Rodgers opted to remove any mention of the word "survey," since the request for lesson plans is more of a form. Comprehension was also a factor in this choice, as the word "survey" may not be understood internationally. Similarly, she also changed some symbology to be better understood by international users; for instance, using an "I" for the information icon instead of a light bulb icon for help. 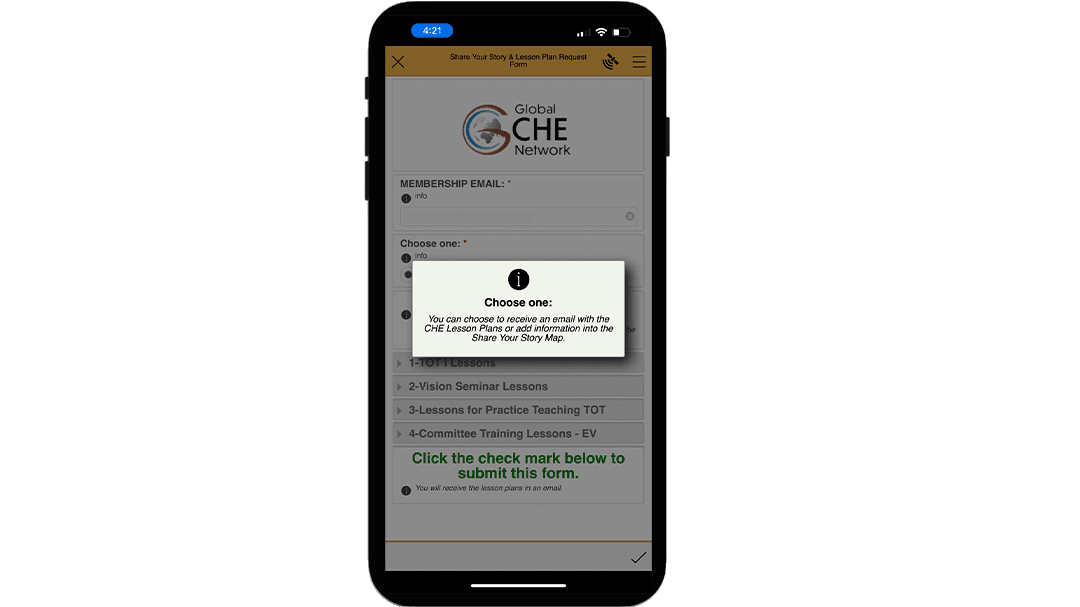 "Once you go into AppStudio, it's awesome because you can do a lot of different things to customize the end product. So it was nice that that was an option, to be able to easily change all of that stuff . . . and give the customer what they wanted," says Rodgers. "It definitely makes my life easier."

Rodgers adds that with AppStudio, Bay Park Data Solutions can offer a customized mobile native app to its nonprofit customers at an affordable price because the firm is building the app with ready-to-use templates.

"If you wanted to build a native app without using AppStudio, [it would cost] $10,000, $20,000, or more. It's something that we couldn't do if it wasn't for AppStudio, honestly, because we don't have the team," says Rodgers. "So it [helps] my smaller business to be able to offer a custom mobile application at a reasonable price."

The new app is easy for Global CHE Network members to access since it's available at both the Apple App Store and the Google Play store. No matter what area of the world the user is in, they can access lessons via the app's user-friendly interface, and the app is simple to find with the GCN logo. Ultimately, the goal is to be able to enable users to access information offline. The feedback from GCN has been very positive. The GCN team is excited for more members to start using it, and Rodgers is looking forward to building more things for them. 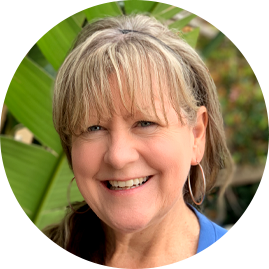 I wouldn't be able to create this mobile native app without using AppStudio. It's a game changer. I love it.

This episode of the Field Notes podcast features Martha Rodgers, CEO and founder of Bay Park Data Solutions, and her team’s work developing GIS solutions for nonprofit organizations. Rodgers talks about the common requirements for developing apps for nonprofits and how ArcGIS AppStudio was perfect for creating an app for Global CHE with little to no coding involved.