Results
The use of ArcGIS Maritime enables staff to work from one central database, streamlining data collection and the production of ENCs

Most of the hydrographic activities in Israel, including nautical chart production and database management, are driven by the INHB, which shares all data related to internal water in Israel.

This small organization collects data to generate and update nautical charts and develop hydrographic models that are key to navigating waterways. The INHB was using traditional paper charts for naval operations and wanted to transition to electronic navigational charts (ENCs), which is the most recent standard, because of the safety benefits they can provide such as route verification and automatic chart updating.

The production of nautical charts at the INHB involved different software and disparate systems. INHB staff implemented a system for managing and producing maritime data that's compliant with International Hydrographic Organization (IHO) standards, supporting the successful transition to ENCs and helping them manage all information in one database. They were also able to expand their use of GIS beyond chart production.

The IHO S-57 standard comes in a variety of data formats, and one common format is ENC, which is a vector format based on the S-57 object model. The separate pieces of software previously involved in chart production meant a person would need specialized knowledge and training on each system. As such, the hydrographic office wanted a new solution that would only involve one production base for producing all of its products. 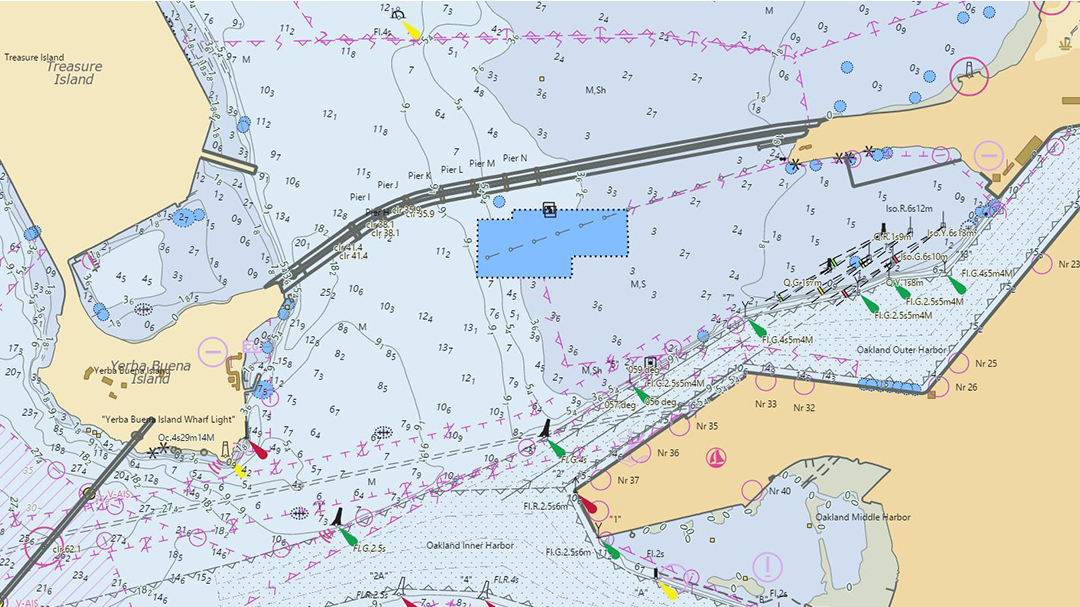 In addition, Commander Avi Dror, former chief of the INHB, explains that the Army Mapping Unit of the Israeli Navy would provide data for use in chart production in different formats and standards, and staff had to assimilate all of it for use. This became an issue because there are only about 15 permanent, long-term employees in the hydrographic office, and all others come in on a rotating basis when performing mandatory service. CDR Dror says mandatory service staff would have to be trained "from zero" so they can perform their job, especially since there's no official hydrographic education available in Israel.

"It was a lot of software in my office, and if you have a very small staff that interchange very fast, it became a big problem for us. So, for this time, the main goal was to get the base of the production circle based on the one software," says CDR Dror. "[If we have one production base] that people are familiar with, it will be very simple to train them on processes."

As staff across the navy were familiar with Esri software, CDR Dror opted to look for a solution in the Esri portfolio to help create one central database for all workflows. An added benefit of a new solution would be for the INHB to produce S-57 charts. Previously, the group did not produce this common chart format and only used paper charts, which CDR Dror describes as a big technological gap.

"People in other departments and other agencies where CDR Dror can borrow from already know Esri. So, for people who are only going to be there for a couple of years, CDR Dror can train them on how to do this complicated thing of creating S-57 data, and they didn't have to learn the entire system," says Craig Greene, ArcGIS Maritime product manager at Esri. "They already knew it. They just had to learn how to make charts in ArcGIS."

Systematics, a local Esri distributor, approached CDR Dror and his team with a proposal to use Esri products as the base for its production circle. CDR Dror was enthusiastic about the idea because Esri was one of the main pieces of software used by almost all governmental offices. The INHB was among the first two users of ArcGIS Maritime when staff began using the beta version of the product in 2009.

"When Systematics came to us . . . it was good news. We already have a very good connection with the Israeli distributor, and that's why we decided to go with Esri products," says CDR Dror. "It was a big risk to take because it was a very new product. But we knew that Esri has amazing potential. So, it wasn't easy, but I think the result is great."

ArcGIS Maritime is a complete system for managing and producing maritime data and products compliant with the IHO S-100 and S-57 series of standards. Greene worked with CDR Dror to implement ArcGIS Maritime, conducting a weeklong training along with several Esri colleagues in the hydrographic office in Tel Aviv.

"The nautical team was always available for us. Esri Support [staff were] a major [contributor to] our success with this project," says CDR Dror. "They do a great job, and we work [well together] because we have a very good personal connection from the beginning."

The use of ArcGIS Maritime enables the hydrographic office to train personnel more quickly. According to CDR Dror, because the Israeli Navy workforce is comfortable with using the Esri system, the only thing that requires training is the production of special nautical charts such as S-57.

"Now I can bring young soldiers from other units that are familiar with Esri products. In a few months, we can train them to explain how the nautical part of the software is working, and they can put themselves in the production process very fast," says Dror. 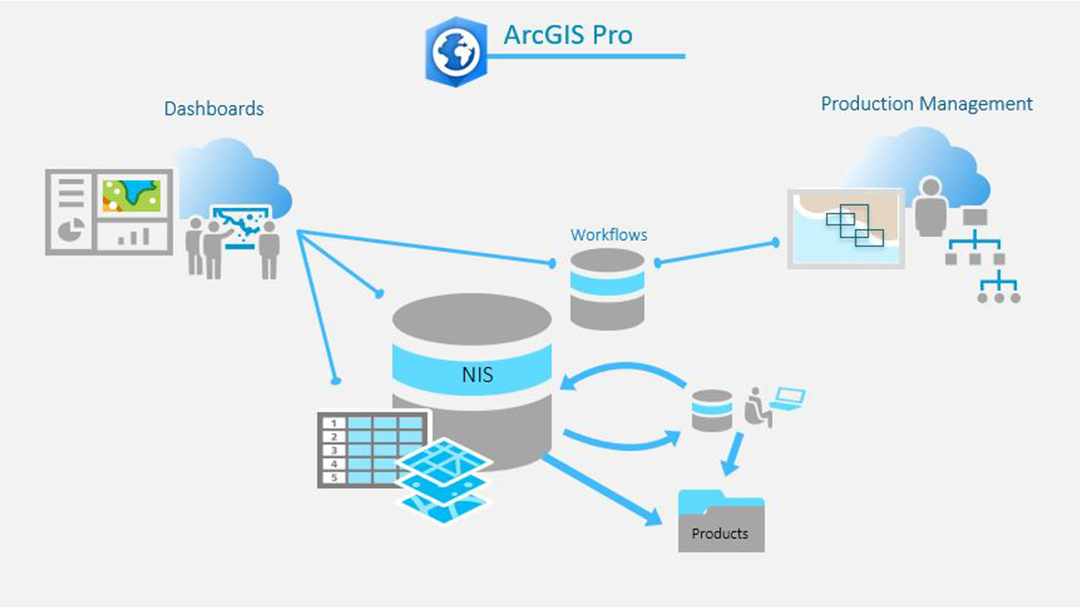 After implementation, the first nautical chart created was of the eastern Mediterranean, which CDR Dror says was massive and took two years to produce. With accurate data available in one database, CDR Dror says subsequent charts now take officers less than a few months to make, and an S-57 ENC, also called a cell, can be completed in a few days.

The use of ArcGIS Maritime has yielded positive benefits for the INHB and enables staff to work from one central database, streamlining data collection and the production of ENCs. Greene says since the individual datasets are no longer separated and live in a central database, CDR Dror and his team can collect, manage, and store data centrally and perform tasks such as quickly adding important features to a chart.

In addition, quality assurance (QA)/quality control (QC) checks have improved because the data is side-by-side in the database and no longer lives in separate cells. Greene explains that you can now more easily improve edgematching along these datasets, which is a significant issue for mariners. If edgematching doesn't exist and the depth contour or depth area changes, the charts may not line up and cause navigational uncertainty.

"If you have something in a seamless database, you can ensure that you have this edgematching along charts, and that just improves the confidence of the mariner," says Greene.

CDR Dror says there was software for production and separate software for validation checks but nothing all in one. He says Greene provided tools that allow him to bring in validation checks for data from other software, and users can then write it back into ArcGIS. This lets them easily see the errors and fix them inside the app quickly.

Maritime has also increased the autonomy of those working inside and outside of the hydrographic office, allowing workers to get the answers they need on their own. Greene explains that previously if someone outside of CDR Dror's department needed a custom chart for a specific mission, a request for it would have to be made with the INHB. The INHB would in turn have to involve engineers and cartographers to create the chart and complete the task, which could take several days to more than a week.

Now, the requestor can simply go to this web application in Maritime and, for example, draw a box and insert a chart with the Custom Chart Builder. Requestors can add the latest survey data or topography data to the chart and make a custom map. 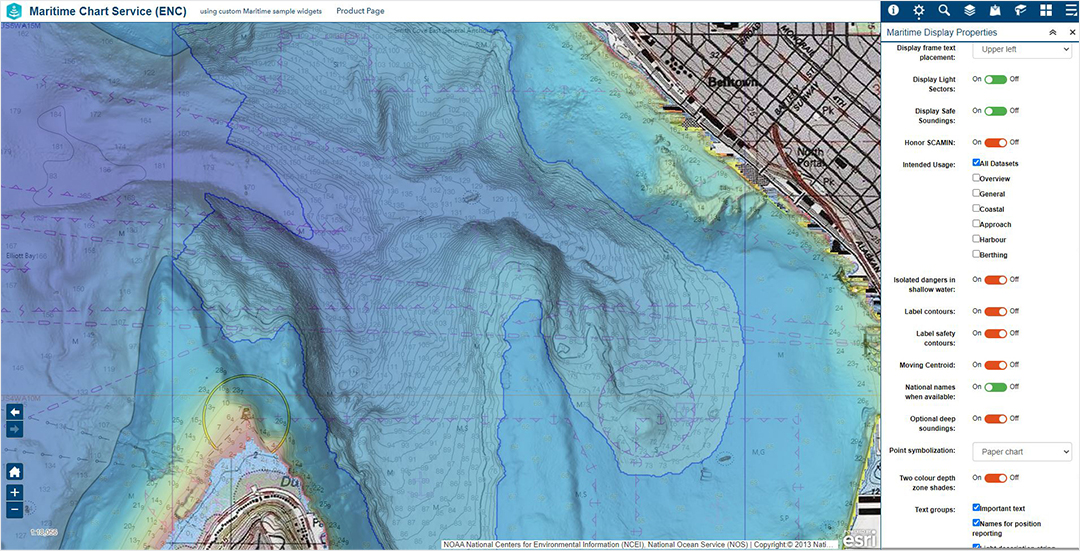 "This saves Dror time and resources in having to address all these requests for mission-based or custom charts. People can just go there and click a button and make the PDF themselves," says Greene. "This is the value of ArcGIS. It's not just about turning a crank and doing production on the desktop. It gave them this system of engagement too."

This increased autonomy across the navy has helped staff engage with a larger group of stakeholders. CDR Dror says they're now able to share information more easily with others using web apps.

"I think it's one of the most powerful parts of my system, because after this process of creation of S-57 charts, now we just update [and maintain] them," says CDR Dror. "Actually, to get [a hold of] my office and ask for the charts, it's abnormal now, because I think most people don't even know the names of my team [members], because they are working with services." 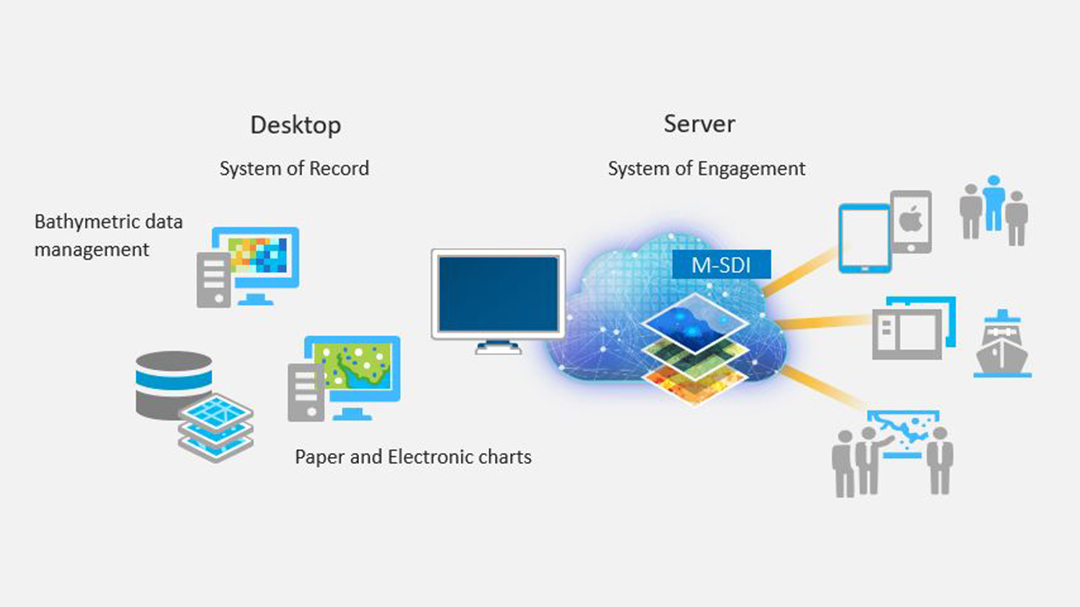 ArcGIS Maritime not only provides the ability to generate navigational products, it also allows you to share this information with your user community

The INHB can more easily keep the data up-to-date, as it's stored in one central database, and access to current data helps with the production of S-57 charts, which are key for military operations. CDR Dror is pleased with the progress that's been made since implementing ArcGIS Maritime and is excited by the great results the INHB is continuing to see.

"Before we switched to Esri software, we were doing a lot of hard work, and we made a lot of tries. All of them were unsuccessful before Esri appeared," says CDR Dror. "So, in the beginning, it was tough, but in the end, it was a happy end for this story."

ArcGIS Maritime did something that was impossible for us because of all the different software and made it possible to have one central database. It was like a dream for us.