Founded in 2019, Mappy, Inc., is a mobile app developer and data analytics company aiming to revolutionize maps and location services with breakthroughs in geospatial technology. One of the first projects developed by Mappy is the Snow Mappy mobile application. The Mappy team set out to build an app designed to help experts and novices alike better navigate the slopes and deliver data and analytics directly to ski resorts for data-based decision-making. Karyn Nolan, Mappy CEO, said the idea was born from ski trips with her husband.

"Looking at the world through a geospatial lens, I thought, 'There's got to be a better way than these paper maps.' So, the first thing we developed was a mobile app so resort guests could have a good experience finding friends, family, and amenities on the mountain. But we are also able to take advantage of the movement patterns to benefit the resort operators," says Nolan.

Nolan assembled several teams to kick-start the project, including the digitize and research teams. The digitize team is composed of lidar and remote sensing specialists who digitize the ski runs and lifts and collect lidar data for the mountains. The primary focus of the research team is gathering information on ski resort amenities such as whether a ski school is available or where the bathrooms are located.

In addition to consumer-facing data, Mappy creates live dashboards with real-time information for groups managing resort operations. Nolan explains that all the collected information on where people are and how they're using the resorts is helpful for the resorts to see and understand movement patterns.

"We bring those pieces together, package them, and create mobile scenes and mobile map packages, as well as publishing for our web maps," explains Nolan.

With the large amounts of data being collected from beta users, Mappy team members trialed ArcGIS Velocity, an add-on capability for ArcGIS Online, to help them process and analyze the data and create visualizations like dashboards to improve ski resort operations. 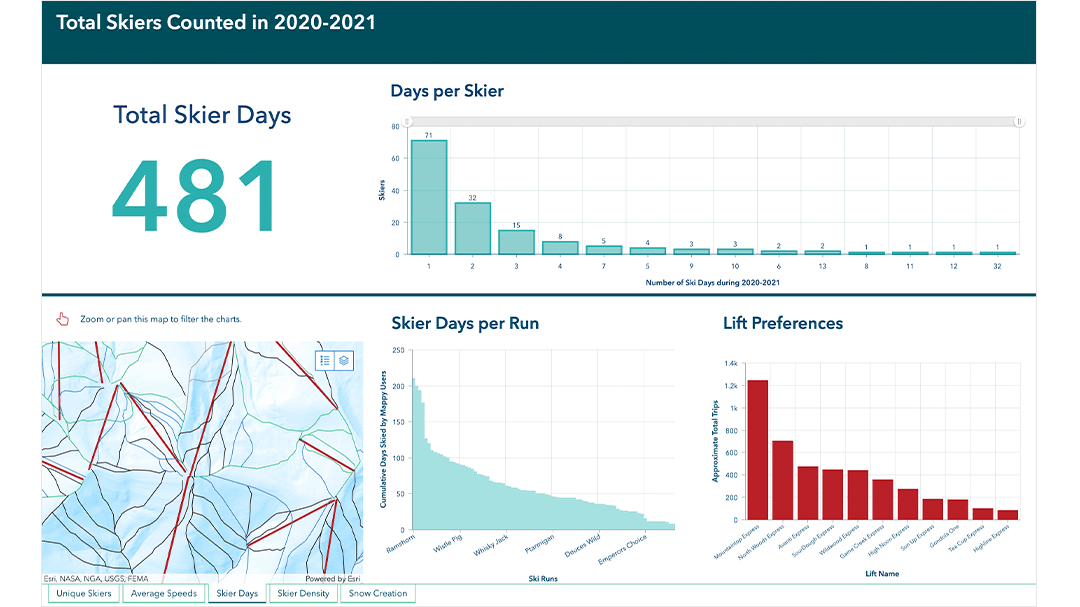 Dashboard displaying statistics for all skiers in the 2020-2021 winter season.

To assist with the Esri integration of the mobile app, Nolan recruited GEO Jobe for its specialization in geospatial application development. As a member of the Esri Partner Network, GEO Jobe utilizes the ArcGIS system to develop apps and solutions for clients for increased efficiency and improved business decisions. Josh Peterson, a software development lead at Esri, connected GEO Jobe with Mappy because its skills in app development would be useful for this project.

"We have an amazing team not only with Esri Services but also with GEO Jobe in helping us execute the combination of the mobile application with the GIS platform," says Nolan. "It's a rare unicorn quality to have people that know app development and Esri GIS."

Nolan says when Mappy team members were building the mobile app with an outside software development company, they were encountering bugs they couldn't resolve. GEO Jobe was brought in at the end of 2020 as their "special forces" to help uncover some of the app's issues and launch the app.

Eric Goforth, director of professional services at GEO Jobe, says, "We connected because there were some things on the backlog that were sort of baffling the current staff [ . . . ] and they needed some fresh eyes on it."

Goforth began the project by examining the work already completed on the app and then working through the geospatial aspects of the source code. The GEO Jobe team also met with Nolan to discuss the technical architecture, what Mappy's needs were, and the long-term strategy for the app. 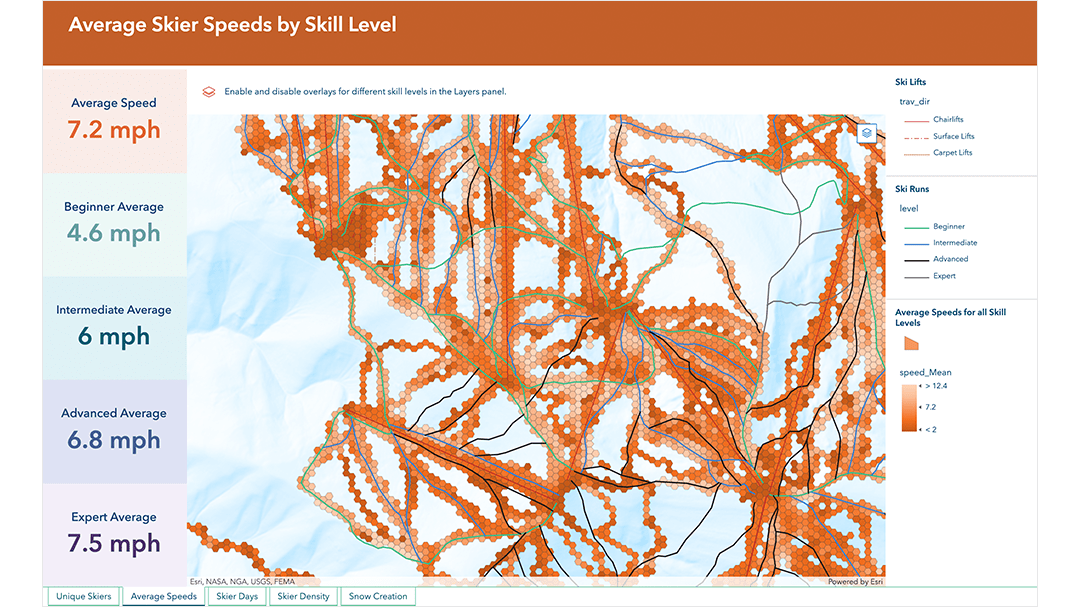 Dashboard features the average speed of skiers by skill level.

As the development of Snow Mappy continued, it was clear that a new scalable solution was needed for the large amounts of data being collected. During the initial ski season, the app was launched with 1,500 beta users and 7.5 million data points. This meant massive amounts of data accumulated quickly, with a limit on how much could be ingested.

As datasets grow continuously from real-time data, Mappy's team thought online hosted feature layers may not be the best fit since they are optimized for workflows such as editing, as opposed to visualization of big data.

"A few weeks' worth of data was essentially the ceiling. So, we knew we were kind of getting into the big data realm," says Goforth. "We started looking at what our options were for storing progressively larger amounts of information and still being able to create analytic products and things like that around it."

Peterson introduced ArcGIS Velocity, a new Esri product, to trial for this project. ArcGIS Velocity is a cloud-native add-on capability for ArcGIS Online that enables users to ingest data from the Internet of Things (IoT) platforms, message brokers, or third-party APIs. Goforth says the long-term scalability Velocity provides was the biggest reason they opted to use it, though it offered several other notable benefits.

"Every option that we got was kind of overly complex and was going to cause us to make a lot of compromises that we didn't want to make. Velocity ended up being the most attractive option for both ease of use as well its turnkey approach," says Goforth. "[We didn't have] to string together six to seven different products to create this experience from start to finish."

The ability to do real-time analytics was another important feature. To Mappy, analytics is key to business to business (B2B) offerings like Snow Mappy, and participating ski resorts can gain a lot of value from the collected data.

To begin learning Velocity, Tim Michael, director of enterprise services at GEO Jobe, did the online tutorials that covered subjects like real-time analytics. He says once he went through the training materials, which he describes as well put together, he began the work.

"There was some trial and error, of course, to figure out what options there were in the app. But I'm fairly happy that everything that Karyn [Nolan] asked to see, we were able to produce a product for it with Velocity, with a few exceptions," says Michael.

The first round of testing occurred during the skiing off-season, so Velocity was primarily used to do big data analytics against existing data, explains Michael. Nolan provided the GEO Jobe team with all the user-generated locations from the previous ski season, and team members were able to export subsets of those and then feed them into the big data analytics. From the data points, they observed patterns like how fast people were going and how much time they spent at a particular location. 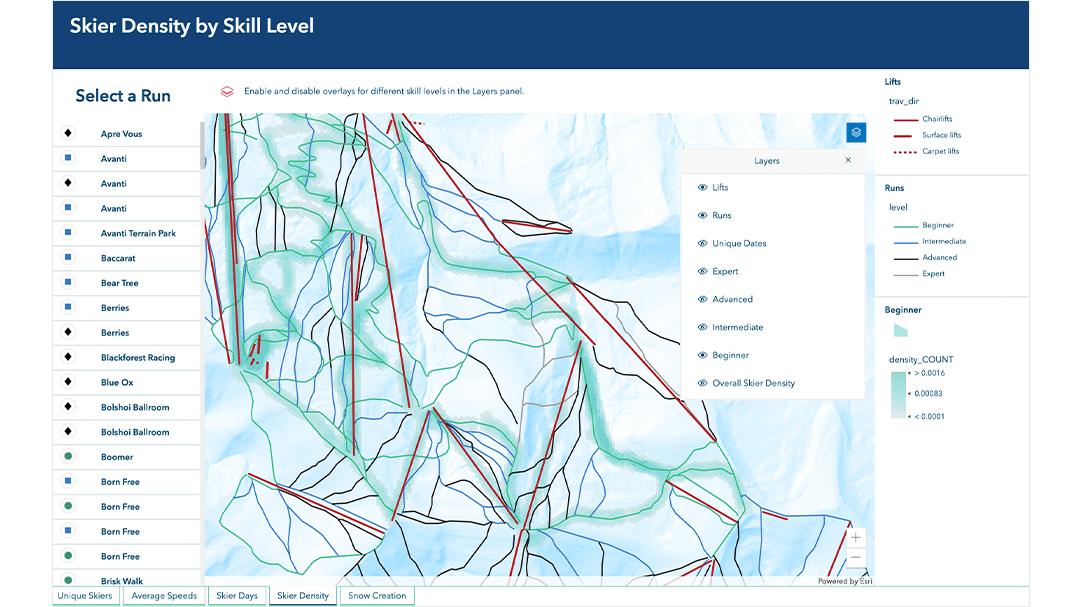 The initial Snow Mappy app launched in February 2021 with a total of five ski resorts, and the first round of testing with Velocity began in August 2021. The latest version of the app enables groups to share their real-time location on the mountain, and searchable resort amenities. Resorts can also use it to locate staff. The feedback from users and resorts has been positive, according to Nolan, and resorts are excited to access the data analysis.

With Velocity, Nolan and the Mappy team can acquire real-time information on app users to analyze the movement patterns of people, whether for a given day or an entire ski season. This data helps resorts determine things like which areas are commonly trafficked by skiers of different levels. Nolan explains that this helps resorts make data-driven decisions to ultimately improve the guest experience. 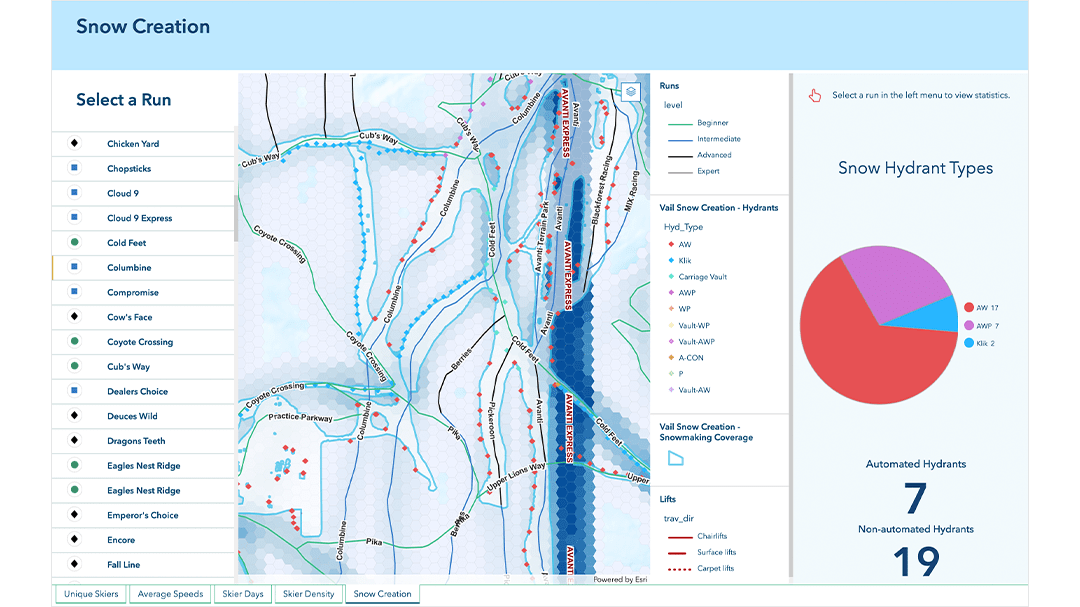 Goforth says, "Velocity gives us the tools to be able to create on-demand analytical products even if we didn't necessarily foresee them ahead of time. That's really what we're looking forward to, is just being able to very quickly, and with some agility, respond to those types of requests."

Nolan values the visualization component of Velocity and says data can be easily combined and then viewed in one map on ArcGIS Online or via dashboards, which improves stakeholder collaboration. ArcGIS Dashboards is one of Esri's many configurable apps, and Velocity produces ArcGIS content that can be used in Dashboards or other configurable web apps. Each operational group at a ski resort, such as ski patrol or guest experiences, often utilizes a lot of the same data but in different ways. The digital dashboard ensures linkage across groups, says Nolan.

During the new ski season, Michael says he wants to assess the capability of Velocity to do archiving and data retention.

"Velocity is giving us capability out of the box to keep the main feature layer relatively refreshed, to give it an interval that we provide, and archive data as it rolls over. That way, we can continue to do analytics on it," says Michael.

Nolan and the Mappy team are looking forward to expanding their use of Velocity and bringing Snow Mappy to more resorts and users this ski season. Nolan says they will be focusing more on enterprise operations and using the data to help resorts further examine the real-time movements of people. This can help them make decisions like how to space people out if there is an area on the mountain prone to congestion or reduce the costly process of making snow if specific runs are not being used.

"There are a lot of ways this data can be utilized that we haven't figured out yet. We're really excited for this season, with the real-time component and the dashboards," says Nolan. "I think that's what the venue and resort operators are excited about, is seeing real-time movement patterns of resort guests on the mountain. "

Mappy wants to create visualizations and data layers that can be consumed in a variety of ways such as a custom web mapping application or a dashboard, or even analytical metrics that can be created on the fly from real-time data that can power things like charts and graphs.

"Creativity is our limitation at this point, not capabilities. And that's where Velocity shines," says Goforth.

ArcGIS Velocity is extremely easy to use and very intuitive. The overall experience of onboarding and being able to go from zero to analytics was extremely smooth.

Discover how to visualize data in real time