The threat of wildfires is growing across the nation—in 2020, more than 50,000 fires in the US burned over 10 million acres. Wildfire management can be difficult due to the unpredictable nature of different weather elements, with the wind being one of the most dangerous. Wind can change direction, intensity, and speed throughout the day, which can contribute to wildfire spread and increase the intensity of a fire.

The Rocky Mountain Research Station's Missoula Fire Sciences Lab, a division of the United States Department of Agriculture (USDA) Forest Service, is dedicated to research that develops and improves wildland fire management tools that are used operationally to support fire response in the US and abroad. One of these fire support tools is a desktop application named WindNinja, a high-resolution wind model that enables fire managers (like fire behavior analysts) to get an idea of what local winds are like in the areas where firefighters are working.

While the desktop application was a popular tool among fire managers, the Missoula Fire Sciences Lab set out to develop a mobile version of the app to use on phones and tablets while firefighters were in the field. To improve the interface and usability of the existing mobile app, the lab enlisted the help of Technosylva, a firm focused on providing geographic information system (GIS)-based solutions for wildland fire protection planning, analysis, and modeling.

By employing a solution designed to help users create geoenabled cross-platform apps, Technosylva—in partnership with the Forest Service—launched a new version of the WindNinja app that has put the powerful wind modeling tool into the hands of firefighters in the field.

WindNinja has a variety of uses, including driving fire spread models, enhancing situational awareness, or re-creating a specific fire event for accident investigations. In addition to these uses of the desktop app, Natalie Wagenbrenner, a research meteorologist with the Forest Service, said it quickly became evident that a mobile application would be useful because fire personnel often work in disconnected environments.

Forest Service research and development scientists created an initial mobile version of WindNinja, but according to Joaquin Ramírez, Technosylva founder and principal consultant, it was based on software that had certain limitations. For example, Ramírez says models that predict the wind provide data every 1.5–2 miles, but in an area like California, the terrain may change dramatically in shorter distances, which can significantly impact wind behavior, and because of that, wildland fire behavior can change too.

Wagenbrenner recruited Technosylva to help develop the new WindNinja Mobile app. The Missoula Fire Sciences Lab had collaborated with Technosylva on previous projects and knew the firm was familiar with the WindNinja app. A few of the requirements Wagenbrenner requested for the new app included the ability to view outputs without connectivity (no cell coverage); a clean, simple interface; and a 3D viewer ideal for viewing the outputs.

Develop a mobile solution for the WindNinja Desktop application that would work offline, has the capability to view imagery in 3D, and has a simple easy-to-use interface

WindNinja Mobile, a no-cost app available on app marketplaces, designed to allow firefighters to run simulations of wind behavior in the field

Wagenbrenner says she wanted the mobile app to be a simplified version of the desktop application. Ramírez agreed and wanted to redesign the app to provide complex modeling in an easy-to-understand way. "As technologists, our role is to try to get science and put it in the hands of the users. We felt very fortunate to collaborate with [Missoula Fire Sciences Lab]," says Ramírez.

Ramírez chose ArcGIS AppStudio to develop the new app. ArcGIS AppStudio is designed to build cross-platform native apps from a single code base. The Technosylva team members have extensive experience using AppStudio, and after determining that a 3D environment would be needed to view wind and terrain activity over time, they knew AppStudio would be an ideal fit for the project. "It's a very 3D mapcentric application," notes Ramírez.

In addition, the ability to deploy apps created with AppStudio across multiple platforms was a "big selling point," says Andrew Buckley, a user interface/user experience designer for Technosylva. Buckley explains that being able to design a universal component would make app design and development easier, allow for faster delivery, and provide consistency for users when switching between devices.

"The ability to both design and build that same component that works on cross-platform was fantastic. From a design perspective, AppStudio was great . . . because it really allowed for easy and quick design, knowing that I only had to make a component once and not have to redesign it completely for another platform," says Buckley.

In addition, Buckley says that since AppStudio is composed of Esri technology on the back end, the team didn't have to come up with certain custom components or tools from a mapping perspective because they were already there and easy to use. "It wasn't something we had to redo. It was standard stuff we could expand upon, rather than trying to go from the ground up," explains Buckley. 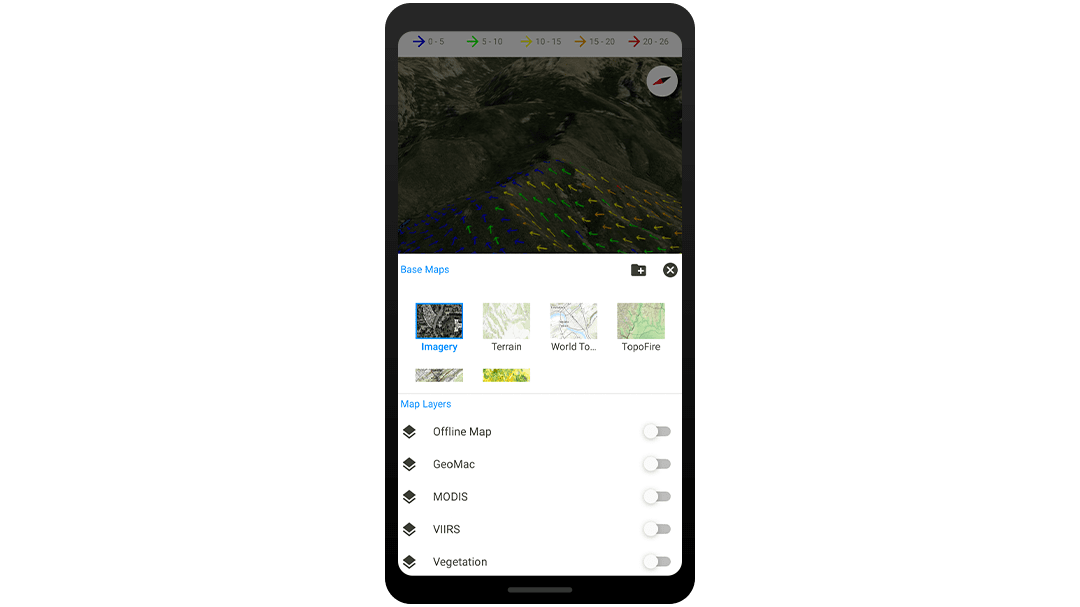 WindNinja Mobile is fully integrated with ArcGIS technology that makes it easy to seamlessly incorporate mapping tools such as Base Maps. This lets end-users choose the accurate Base Map that would best fit the scenario.

To begin the development of the app, the Technosylva team discussed the technical requirements with Wagenbrenner because those needs would dictate the look of the interface and user experience. The team created wireframes for Wagenbrenner's team to review, which helped perfect the workflows. Buckley says the Forest Service staff wanted a simple way for the user to access information and create simulations without having to get into what he calls the "complex stuff."

"We wanted something that was very mapcentric, and not only mapcentric from the side of viewing the outputs but actually generating and identifying the location where you wanted to do the simulation," says Buckley.

The revamped WindNinja Mobile app calculates the effects of the wind on the terrain, and users can choose to receive an email or text message notification when their calculations are complete. Users can download and view the simulation in the mobile app when complete. The app also allows users to visualize VIIRS hot spots (hot spots derived from the National Oceanic and Atmospheric Administration [NOAA] satellite that represent locations with possible fires), change the view to a topographic map, and add their own local TPK maps.

According to Wagenbrenner, the no-cost app, now available from the Apple App Store and Google Play, is growing in popularity—new subscribers are being added daily, and the app is now in the hands of more on-the-ground firefighters. She adds that the new interface is much cleaner with a simpler workflow, ultimately improving the user experience.

"WindNinja Mobile is designed specifically to allow users in the field that don't have access to laptops and things to be able to—just with a click of a few buttons—get some better estimate of what the winds are doing in the areas where [users are] working to improve safety and situational awareness," says Wagenbrenner.

The updated mobile app has introduced a streamlined workflow: users tap a button to create a simulation, digitize on the map where they want the simulation to be, set the simulation duration, and tap Run. Users can also access previously run simulations with the tap of a button. In the desktop WindNinja application, Wagenbrenner says, there are a lot more customization options available, which works well for users who may have more training or experience in weather or fire behavior. 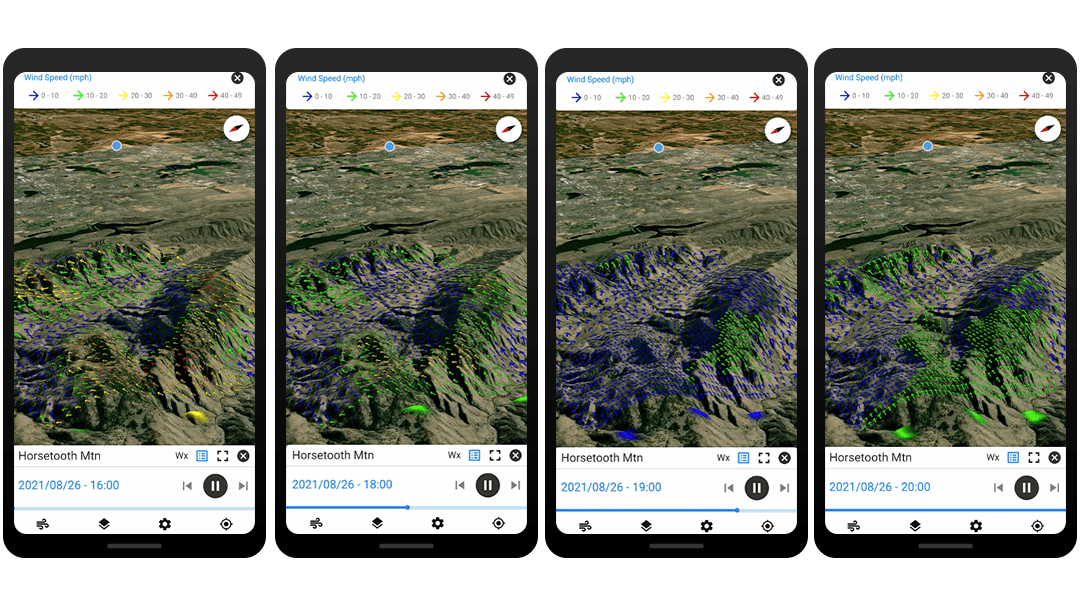 With the WindNinja mobile, firefighters in the field can monitor and run simulations of wind behavior.

However, for fire personnel on the ground who have limited knowledge in this area or don't have a lot of time to set up a simulation, Wagenbrenner says that the simplified interface works "because we make a lot of choices for the user ahead of time."

"On WindNinja desktop, it's a lot more complex and there are a lot more fields. So one of the tasks was to streamline the process," says Buckley. "Especially out in the field, a firefighter doesn't have a lot of time. So in just a few very quick short clicks or taps on the screen, you can have a simulation run."

WindNinja Mobile allows users to share their completed simulations by sending just a link. The recipient can download it to WindNinja Mobile and access it even when disconnected. The ability to run and view simulations with limited or no cell coverage is one of the most significant benefits of the mobile app.

For example, Wagenbrenner says a firefighter can run a simulation in the morning at fire camp when they do have coverage, download the simulations to their device, and have them available when they're ready to go out for the day. "It's a really good setup to be able to have that offline capability for viewing those outputs," she says.

The feedback Wagenbrenner has received has been very positive, with an array of users sending in reports and photos detailing how they have used WindNinja Mobile in the field and how it was helpful for their work. She adds that users like the mobile app because it's easy to use and the modeling is accurate in many cases. She notes, "Users have reported that the winds that they're seeing predicted in the app are what they're seeing on the ground . . . so I think we're just going to see more and more use."

While the target audience for WindNinja Mobile is wildland firefighters, Ramírez says that the capability of accessing a high-resolution wind model has applications in different activities such as avalanche forecasting, or sports like paragliding and backcountry skiing. The Technosylva team is excited about the possibilities and looks forward to continuing its work on projects that can help firefighters.

"Learning and helping to make the science actionable—that's something that puts a smile on your face. That's one of the wonderful projects that you want to be involved in," says Ramírez. "For us, it's been amazing to work with [Missoula Fire Sciences Lab]. We really feel very happy to serve this community together." 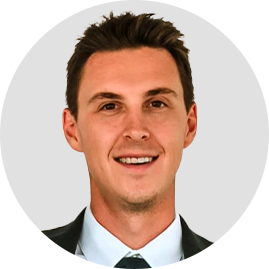 ArcGIS AppStudio makes the design process quick and easy because I'm not having to redesign elements or keep changing them depending on the device or the operating system. I design a component once, and my team can easily re-create it for multiple platforms.