From enjoying gorgeous mountain views to the exhilarating feeling of gliding down the mountain, snowboarding is an incomparable experience enjoyed by more than seven million people each year. Among the 525 ski resorts in the United States, the 133 mountain trails of Jackson Hole, Wyoming, have attracted snowboarders from all over the world looking for a thrilling winter adventure with 2,500 acres of inbound terrain and a 4,139-foot vertical drop.

The first stop in the inaugural season of the Natural Selection Tour, a snowboarding competition series sponsored by Red Bull, brought snowboarders to this picturesque ski region to compete at the Jackson Hole Mountain Resort in February 2021. Due to the challenging terrain and weather conditions, Red Bull wanted to give snowboarders a tool to plan their route ahead of the competition and enlisted the help of XR Media Group, an Emmy award-winning production company.

To best capture the competition trail that was full of trees, cliffs, rocks, and jumps, XR asked VCTO Labs to step in. VCTO Labs provides technical solutions to help organizations and television shows bring their stories to life. VCTO chose to use drones to get the imagery at Jackson Hole and drone mapping software, with specific features that had not been tested in the field, to capture high-quality imagery. The intention was to allow competitors to have a fully virtual experience before they hit the mountain. 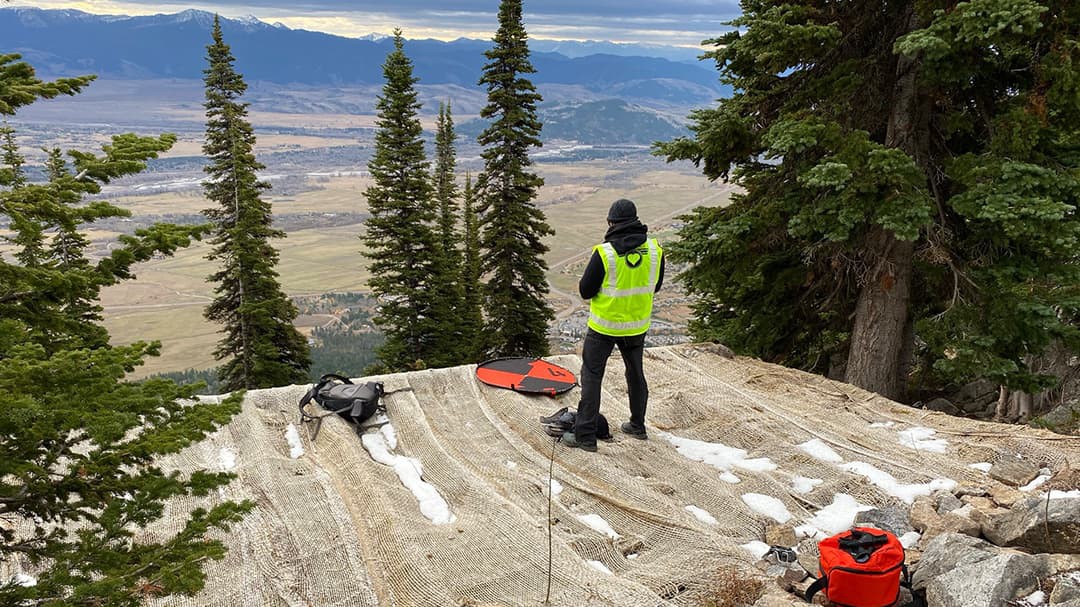 VCTO Labs was tasked with making a 3D model of the rugged terrain and very high elevation of the Jackson Hole mountain and had a limited number of days to capture the drone data before inclement weather set in.

The Terrain Follow feature in Site Scan streamlined the collection of imagery by eliminating the need for repeat flights, and the Geofence feature allowed them to automatically stay outside the no-fly zones. The team was easily able to capture and process their data quickly using the automatic and repeatable features of Site Scan.

The main objective of capturing drone imagery was to virtualize the ski area where the competition was taking place. Pete Kelsey, the owner of VCTO Labs, explains that Red Bull wanted the competitors to be able to see the trail in 3D to virtually plan their run on a smartphone. The Natural Selection Tour is a 100 percent backcountry competition, meaning the course is set up with a selection of natural terrain, powder snow, trees, boulder fields, and natural and manufactured jumps. As such, the VCTO team also needed to map the different obstacles and jumps on the mountain.

The rugged terrain made it difficult to fly drones and capture quality imagery. The terrain included a very high elevation of the mountain (9,000 feet above sea level), a steep average slope of 45 degrees, and 1,000 feet of elevation difference. The high elevation translated to thin air toward the top, which Kelsey says can affect the aerodynamics and battery life of the drones they were flying. The area is also heavily wooded and lies on the northern and eastern borders of Grand Teton National Park, which doesn't allow drones, so finding a way to legally fly was an additional obstacle.

Kelsey set out on this challenging project by assembling a small team, which included Bobby Valentine, a self-described technology evangelist. To capture drone imagery in an area like Jackson Hole, Valentine says he previously used different techniques in the mining industry that were time-consuming. On a recent project at a Colorado granite mine site with an 800-foot vertical drop, he would repeatedly fly the drone in tiered rectangular area scans to try and maintain a consistent altitude.

"I had to fly using a tiered technique. It took a tremendous amount of time because you would have to plan these flights individually. You'd have to figure out what your elevation changes were," says Valentine. "It was dangerous, and it took a lot of time to plan and a lot of batteries to fly."

Kelsey and Valentine set out to find a solution that would enable them to capture quality imagery and maintain a consistent altitude. 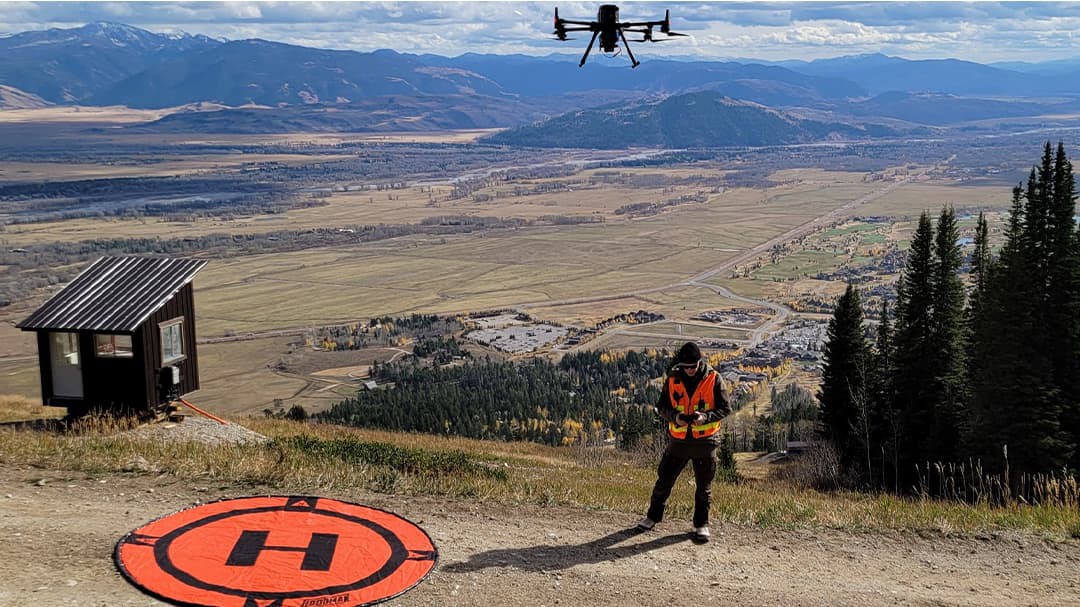 Drone operator flying the drone on the mountain

Valentine was very familiar with Site Scan for ArcGIS, using it for the first time six years ago during a project at Colorado's Red Rocks Amphitheater. He recommended it for the Jackson Hole site survey. Site Scan is the end-to-end cloud-based drone mapping software for imagery collection, processing, and analysis.

"My objective in going to Jackson Hole with Pete [Kelsey] was to…use Site Scan and some of the new tech that was available to us in a very challenging environment," he says.

Kelsey adds that the Site Scan Flight app had some newly released features that were mission critical, including the Terrain Follow feature. Previously in beta but now a fully supported feature, Terrain Follow is a feature in Site Scan that allows a drone pilot to load 3D terrain data in the mission planning software. This enables the drone to follow the ground and keep a consistent flying height above the mountain. Mapping in this way creates a very detailed model of the slope, with constant image overlap and resolution throughout the flight while maintaining a safe distance from the terrain.

With no documentation available for this new feature at the time of the project, Kelsey and Valentine received support from Nico Bonnafoux, product manager at Esri, to capture footage of the competition area. Drone Tech Imaging, a Colorado-based technology firm, captured drone imagery of the full 1,000 acres. Kelsey and Valentine were the first to use the Terrain Follow feature for a commercial purpose in the field, and Bonnafoux was walking them through the new capabilities by phone while they were in the field.

Valentine says he and Kelsey spent a lot of time on the ground planning the missions—sight unseen—and trying to determine things like how high the drones will fly, how tall the trees are, and where to take off and land. However, the team knew that things could change on-site, and a steep grade along with wind, snow, and physical terrain made completing the mission a challenge.

"If we hadn't had access to [this feature] through Esri, the project wouldn't have worked. Nobody had used this function within Site Scan before. It was the day it was released to beta," says Valentine. "It was a bit of a miracle that the planets aligned, and Nico [Bonnafoux] says, 'Hey, I've got something that you guys should try.'"

Kelsey adds, "Without Terrain Follow, the risk is you're almost guaranteed to capture bad data, or that the drone will collide with the ground and you'll have a total loss. It was very tense and stressful, but it was a lot of fun figuring it out." 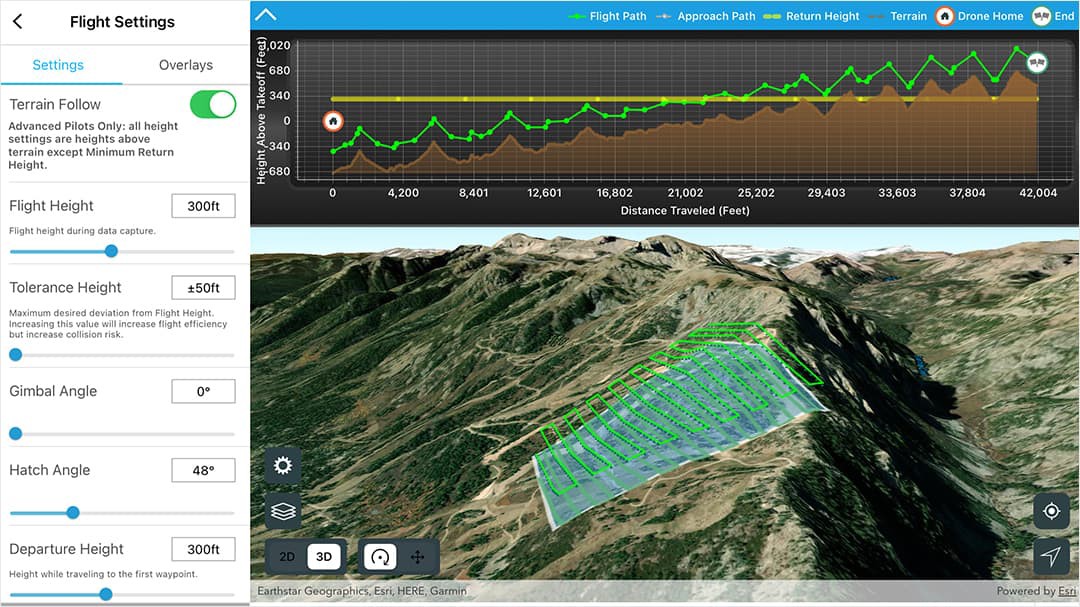 To get a 3D point cloud and mesh model of the competition trail and its obstacles, jumps, and landing areas, Kelsey and Valentine got the quality imagery they needed in a matter of hours despite severe winter weather. The Terrain Follow feature in Site Scan streamlined the collection of imagery by eliminating the need for repeat flights, which was the method done previously with different software.

"This [feature] allowed us to fly patterns otherwise impossible until [we had] the ability to follow the terrain and capture the data we needed at a consistent altitude and fidelity. And like I said, it was flawless," says Valentine. "There were a lot of high-fives going on."

The quality of the data collected also improved as a result of using the Terrain Follow feature in Site Scan. Valentine explains that after he and Kelsey got guidance from Bonnafoux on how to set up the flights and what "flight modes" to use, the app took care of the rest, and the data captured was excellent. Site Scan is designed to produce high-accuracy and high-resolution outputs safely and efficiently. 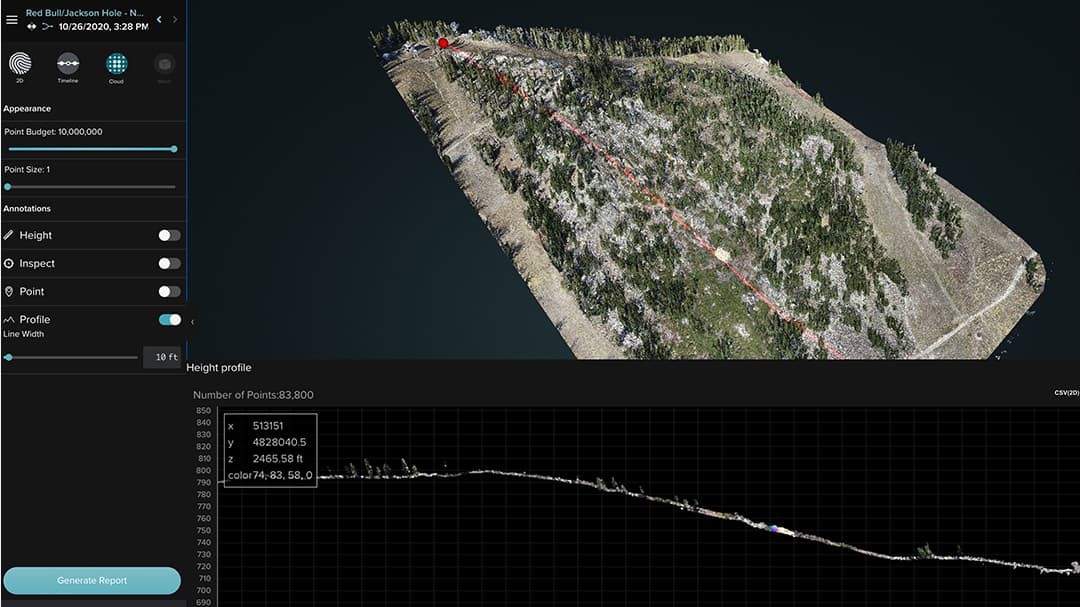 "If you're doing these flights with tiers, or you're just flying higher to avoid the terrain, then you won't get as good a result because your imagery resolution would be lower at the bottom of the site, and you may have insufficient overlap between images near the top," says Bonnafoux. "The reason we created this functionality is the efficiency of avoiding these workarounds that Bobby [Valentine] would have had to go through in the past of flying in different tiers and doing all these multiple flights, which are extremely time-consuming."

Due to the national park's no-fly zones, the geofence feature in Site Scan was another beneficial feature at Jackson Hole. Enabling a geofence allowed the team to create a flight path that kept the drone within a defined polygon and preselected boundaries, helping avoid obstacles and staying outside the no-fly zone.

The ability to download maps before a flight and view them offline was an additional feature that helped the team. Valentine says without this "must-have feature," they would have been unable to use the Terrain Follow functionality.

"We were in areas where there's no cell service. The ability to download the maps so when we go in the field we could bring that stuff up remotely was hugely beneficial," says Valentine. "[We could] download the maps, so we had the 3D data to then plan our altitudes and use Terrain Follow."

Bonnafoux adds, "That was one of our challenges in developing this: making sure that this functionality is usable offline. In many cases where you are flying in areas with a lot of elevation changes, you might not have a cellular connection. So being able to download that data locally is an important function."

Kelsey and Valentine look forward to working with Bonnafoux and the Esri imagery and remote sensing team in the future, with both men saying Esri's support was critical to the success at Jackson Hole.

"[Terrain Follow] was new functionality that had never been used in the field. So Nico [Bonnafoux] was supporting Bobby [Valentine] in the field in real time. That to me speaks really highly of Nico and the culture of Esri," says Kelsey. "Nico always answered the phone. I mean, we're on a mountain in a snowstorm being taught how to use this functionality. He was just as important to the success of this thing as the tool itself."

Once all the imagery was captured and the team returned to a location with internet connectivity, they uploaded it to the Site Scan for ArcGIS Manager cloud. There, it was processed into a 3D point cloud and mesh as well as a 2D orthomosaic high-definition map and elevation model. This process is fully automatic and enabled the team to complete the processing in only a few hours, well before the XTC team made it back to home base. 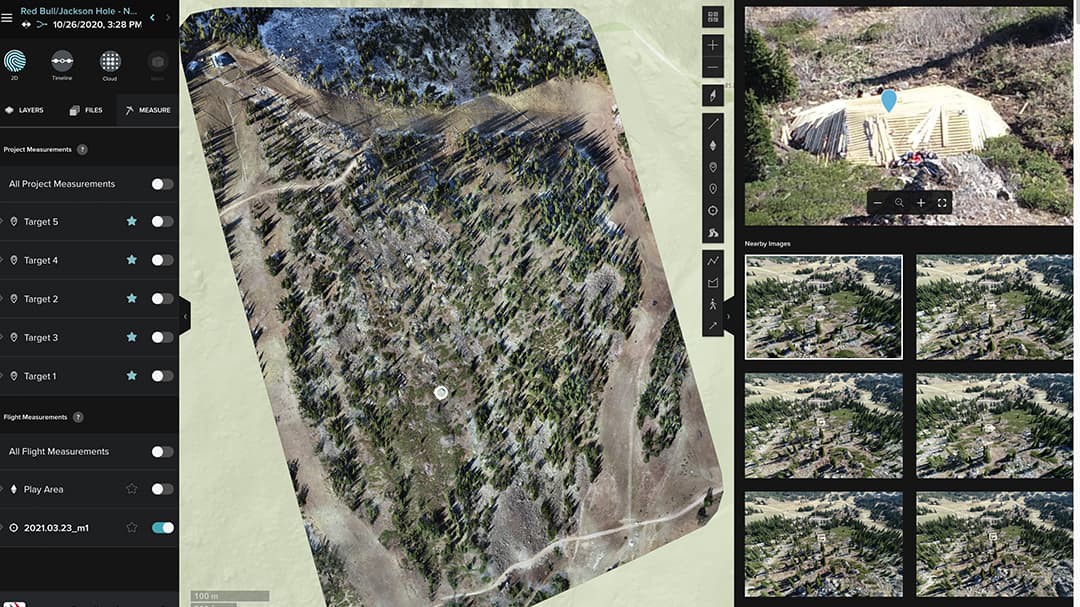 Since the Natural Tour selection project was completed, Kelsey says the 3D model of the Jackson Hole ski area received excellent feedback from XR and Red Bull with the development of this new workflow. He acknowledges the risk of using beta software in the field and says it was a leap of faith but is happy they were "positively reinforced."

Kelsey adds that Esri supporting the digital twin (a virtual model of a real-world place) and reality capture is significant because so much of the data captured is spatial.

"The beauty of a digital twin is that the data can be repurposed for anything. You're literally only limited by your imagination," says Kelsey. 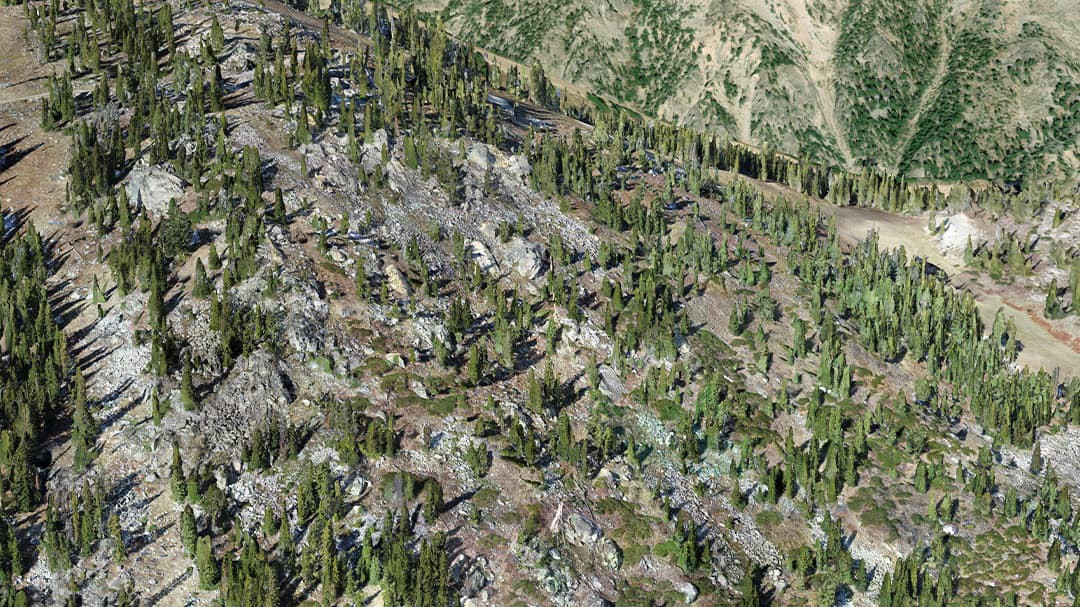 The data captured at Jackson Hole with Site Scan for ArcGIS came out phenomenal as a result of the Terrain Follow feature. I don't think we could have captured the data we did without it.