ET GeoWizards is a set of powerful functions that will help the ArcGIS users to manipulate data with ease. It enables the ArcGIS users with any type of license to perform a large variety of spatial tasks. • Data conversions between different geometry types. • Data verification and cleaning. • Analyzing vector data, reporting and correcting topological problems. • Deriving important spatial characteristics of features (envelopes & minimum bounding rectangles of features, width and length of polygons, Z characteristics of polylines, etc). • Analyzing spatial patterns of vector data (building convex & concave hull, Thiessen polygons, creating polygons from point clusters, deriving centerlines from polygons, thinning or dispersing point data, etc.) • Import/Export (Google Earth, text files). The software is fully integrated with ArcGIS 9.2, 9.3 and 10.0 and is available to the end users in three major implementations • Via the graphic user interface with integrated help system. The wizard type interface makes the functionality easily understandable even for novice ArcGIS users. • Via geoprocessing tools that allow the use of the functions within Arc Toolbox, in models built with the ArcGIS Model Builder as well as Python scripts that can be executed outside of ArcMap. • Most of the functions are available for programmatic use in any language that supports COM With more than 110 functions available via the interface, 100 geoprocessing tools and more than 100 functions for use in COM applications, ET GeoWizards gives the ArcGIS users a lot of power in analyzing and modifying their spatial data. The first version of ET GeoWizards was released in January 2002. The software currently has many thousands registered users in more than 70 countries. 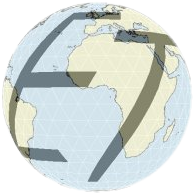