The renowned marine biologist and oceanographer Sylvia Earle once called the Galápagos Islands, in the Pacific Ocean, “the sharkiest place on the planet.” When she visited the Ecuadorian archipelago in the mid-1960s, she noted that the waters were teeming with species such as scalloped hammerhead and silky sharks.

In the early 1970s, Earle traveled to a remote location north of the Galápagos: Cocos Island, off the coast of Costa Rica. Like the Galápagos Islands, Cocos Island is a national park that’s off-limits to commercial fishing. Also, each area has been named a World Heritage Site by the United Nations Educational, Scientific and Cultural Organization (UNESCO).

Earle marveled at the diversity of marine life around Cocos Island and noted the importance of the 120,000-square-kilometer migratory waterway between it and the Galápagos that’s used by sharks, turtles, and other ocean species.

“It’s not good enough that Cocos and Galápagos have a safe haven around them,” she said. “What about the space in between? That has to be protected too.”

That’s why Earle’s nonprofit ocean conservation organization Mission Blue designated the waterway, Cocos-Galápagos Swimway, as one of its global network of Hope Spots. Hope Spots are marine areas that the organization considers scientifically critical to the ocean’s health. Some of them are already designated as marine protected areas (MPAs) but all need protection or additional protection and are key to Mission Blue’s effort to preserve and restore the ocean. The organization has named more than 130 marine protected areas as Hope Spots.

The concept of Hope Spots comes from the dynamic vision of Earle, a legendary marine scientist and former chief scientist for the National Oceanic and Atmospheric Administration (NOAA). Earle introduced this farsighted idea in her 2009 TED Talk, inspiring millions of people around the world to embrace and support ocean conservation.

The story of Cocos-Galápagos Swimway Hope Spot, is told in one of 130 ArcGIS StoryMaps stories that were created to showcase Mission Blue’s Hope Spots.

“Without knowing [what’s going on], it is very hard to care,” Earle said. “Esri has given Mission Blue a powerful tool to share the view with the public, so people across the world can learn about Hope Spots and the creatures that inhabit them. Through knowing comes caring. That’s cause for hope.”

Mission Blue launched an interactive online platform, developed with ArcGIS Online, to tell the story of each Hope Spot and spread awareness about the need to protect the area from pollution, fishing, or overfishing. The platform includes a web map—created with Esri’s ocean basemap—that shows the location of each Hope Spot. 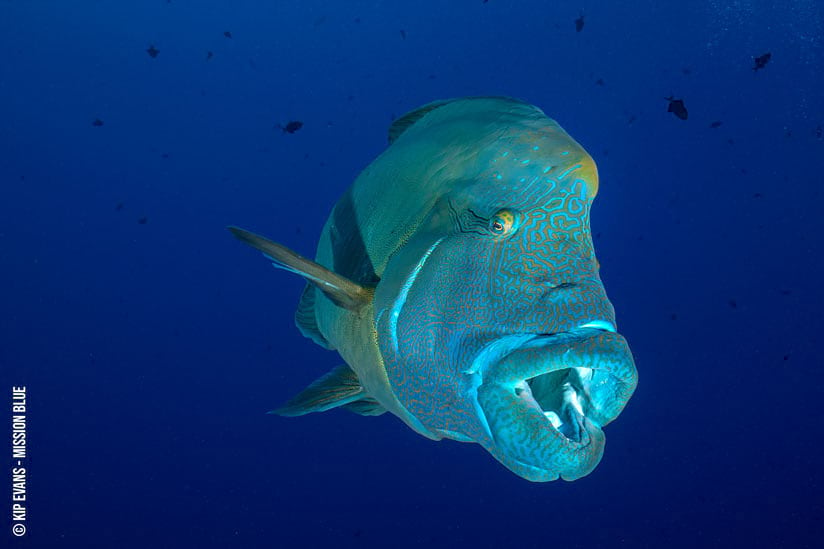 What are Hope Spots?

Hope Spots give Mission Blue the ability to plan and look beyond current MPAs, which—like national parks on land—are places where exploitative uses, like fishing and deep sea-mining, are restricted. Hope Spots are often areas that need to start receiving protection, but they can also be existing MPAs where more action is needed. They can be large, or they can be small, but they all provide hope due to their having

The idea is that anyone can nominate a special site—a site that gives hope. Collectively, all these Hope Spots will create a global wave of community support for ocean conservation that leaders and policy makers cannot ignore.

Clicking the Hope Spot symbol reveals a pop-up with links to videos, photographs of marine life, and documents including press releases. You can also click the Explore This Hope Spot link and, using ArcGIS StoryMaps, view an in-depth story about each marine ecosystem. A curated collection of StoryMaps stories features 30 Hope Spots.

“We chose ArcGIS StoryMaps as a platform because [it] offered us an immersive experience that we felt would really bring our audience into the Hope Spot,” said Laura Cassiani, executive director of Mission Blue. “It was important to us to have a medium which would convey photos and videos in an impactful way while also offering mapping capabilities so we could put the stories in geographic context.”

StoryMaps stories on 130 Hope Spots were authored by Avrah Baum, Mission Blue’s communications strategist. In the story for Cocos-Galápagos Swimway, Baum included a map that shows the ocean highway that sharks and green sea turtles use when traveling between the Galápagos Islands and Cocos Island or to the waters just off Costa Rica or Ecuador.

Baum also added a video of sharks and sea turtles being caught on hooks and in nets. “This is a location that is facing intense commercial fishing operations that are virtually emptying the oceans,” the narrator says.

Another video features Earle talking about trying to think like a shark, a turtle, or a sea lion when deciding what areas of the ocean to protect. She talks about how the waters between Cocos Island and the Galápagos Islands are a major migratory route for marine species. “These two places are like a destination for them, where they find food in the space over which they travel,” she says in the video.

Baum said the StoryMaps stories are especially popular with readers who subscribe to Mission Blue’s monthly newsletter, which includes links to the stories.

“ArcGIS StoryMaps allows the users to experience a Hope Spot in a different way,” Baum said. “You can zoom in and out of Hope Spots and see where they are in the world. Some are in remote places that most have not heard about before.”

While she does not have a background in GIS, Baum became a prolific ArcGIS StoryMaps story creator, thanks to a workshop she took during the 2019 Esri Ocean and Atmospheric GIS Forum in Redlands, California. (The event will be held again this November but has been rebranded as the Esri Ocean, Weather, and Climate GIS Forum.)

“That was a great way to immerse myself in the technology,” Baum said.

Through the Hope Spots initiative, Mission Blue recognizes, empowers and supports individuals and communities around the world in their efforts to advance ocean protection.

Part of this work now includes the Hope Spot information platform, which is designed to allow the public to access Hope Spots in a new and immersive way. Esri’s ArcGIS Online underpins the system and provides mapping, multimedia, and reporting features that will substantially enhance the Hope Spot initiative in the future.

“We have made a big step forward in our use of technology to promote ocean conservation,” Cassiani said. “Now that all our Hope Spots are mapped and cataloged with beautiful and interactive multimedia, we are able to invite the public to dive in and see what these vibrant marine ecosystems are all about.”

Mission Blue plans to do more, however, using GIS technology.

“The next phase will include collaborating with our Hope Spot champions—the scientists, activists, and other stakeholders on the ground in our Hope Spots—to add rich layers of oceanic and marine biological data,” Cassiani said. “The goal of the entire platform is to educate and connect with the aim of increasing support for the creation and enforcement of [MPAs] in our Hope Spots.”

“The work being undertaken by the Mission Blue team is a critical part of a global effort to literally ensure our survival on this planet,” said Wright, who is an oceanographer herself. “Even though the ocean is a victim of climate change, it’s also a powerful source of solutions. But we cannot garner those solutions unless the ocean is much more fully explored and protected. Hope Spots provide a fantastic way to bring these issues to light and [move people] toward action.”

Loveman directs Mission Blue's communications program as well as shoots video for the expeditions program. As the son of an original national organizer for Earth Day, Loveman grew up in a family dedicated to preserving the integrity of our environment. Brett graduated from Tufts University with a degree in International Relations and has focused his career on producing communications strategy, content marketing and video production for organizations that better our planet.