Handling XML with Python in ArcGIS

The Python language offers a variety of ways to handle and parse XML. Lots of GIS data can be stored in an XML schema. For example, KML is made up of a well known XML structure. Another well known structure includes GPX, the native format that GPS devices typically save too. By using Python and ArcPy, you can create features from XML. 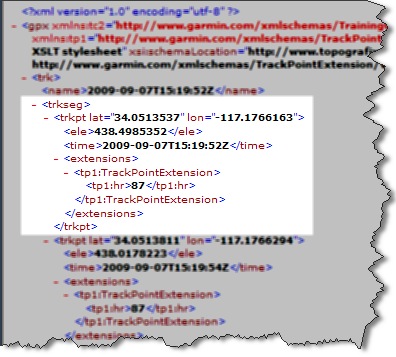 One of my teammates on the Geoprocessing team recently invested in a GPS sports watch. In addition to telling time, his watch could track movement and monitor heart rate. Since we love geography, programming, geoprocessing and fitness so much, another teammate, Ghislain, took to writing a tool to turn the GPX (XML) into feature classes for display on a map. A closer inspection of the GPS output and a look into the schema provided by topographix(http://www.topografix.com/gpx/1/1/) shows that the XML follows a standard format on how latitude, longitude, elevation and time are saved. This particular schema is enhanced to save the heart rate information. Since the information is saved in an expected way, one Python script could be written to handle many different GPS outputs.

Ghislain looked into the Python class ElementTree. ElementTree has many easy to use functions to parse through XML. Python also has other objects like Minidom or XPath which can be used to read XML; however, for this script ElementTree was used. The script looks for the values mentioned previously and hands this information over to an ArcPy cursor which writes the information into a point feature class.

The complete script is available in the Model and Script Gallery: GPS to Layer. Feel free to take it and use it simply to convert your GPX points into a feature class, or break it open and look at how Python can be used in your ArcGIS workflows. Use the comments section here or on the page itself to leave any feedback on this tool.

Well, what good would this GPS to Points tool be if we didn’t use it to evaluate the fitness level of our co-worker? Based on the map show below there is a lot of orange and red, and I’m concerned with a heart rate of 200 beats per minute on the uphill, but according to Wikipedia, he just must be giving his “maximum effort”. At least his maximum effort is an honest effort! 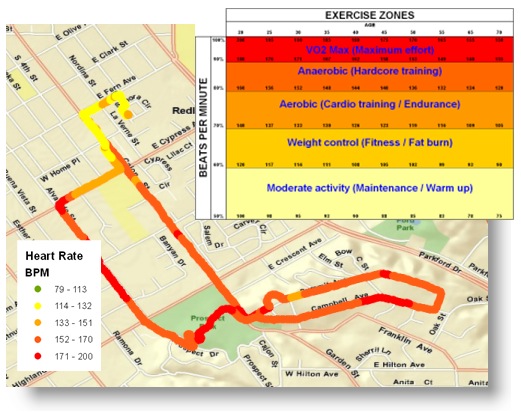