In the blog about distributing data and analysis, I showed using the Tabulate Intersection tool to overlay archeological sites and land parcels to create a table containing information about each parcel within an archeological site. Figure 1 shows the data and the results of Tabulate Intersection. This “what sites overlay what parcels?” question is a classic overlay query. These types of queries are the bread-and-butter of geographic analysis. 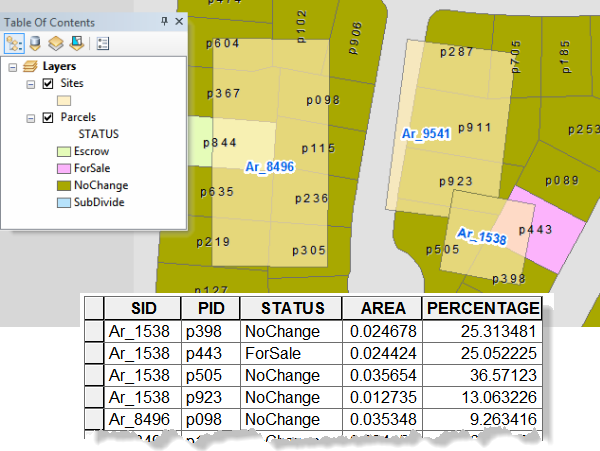 Figure 1: Map of Parcels and Sites and the table output from Tabulate Intersection. In this table, SID is the Site Id, PID is the parcel identifier, and STATUS is an attribute on the Parcel Layer. AREA is in hectares and PERCENTAGE is the percent that a parcel covers the site. For a SID, PERCENTAGE will add up to 100

There are several tools that answer overlay queries in ArcGIS, but there are subtle and important differences between them. In fact, while researching my previous blog post, our client pointed out some differences that I wasn’t aware of. It was then that I decided that a review and comparison of some overlay capabilities in ArcGIS would make for a good series of blogs.

You can download this geoprocessing sample that contains data and models that demonstrate creating a tabulation table using the tools discussed below.

The context for this blog comes from this question: “Tabulate Intersection is only available with an Advanced license, which I don’t have. Also, it’s a new tool at version 10.1, which I haven’t installed yet. I tried getting a tabulation table using other tools, but was unsuccessful. Can I create the tabulation table output by Tabulate Intersection using other tools?”

The table below lists the four tools most commonly used for overlay queries. They all work with a Basic or Standard license. In the remainder of this blog, I’ll look at using these four tools to produce a tabulation table (the output of Tabulate Intersection).  The Sample Model column contains the name of the model found in the download that demonstrates the use of the tool.

The granddaddy of them all – the Intersect tool

Whenever you have an overlay query, the first tool you should think of using is Intersect. Of all the tools listed above, it’s the only one that creates new features based on the geometric intersection of the input features. The new features have the correct area of intersection which means that we can calculate the AREA and PERCENT fields shown in Figure 1. In addition, Intersect can apportion any attribute based on area.
Below are the results of Intersect for one of the sites, Ar_8496. The left graphic (A) shows the raw geometry output by Intersect. The right graphic (B) shows the output features in relation to the parcels, showing the PID (Parcel ID) and SID (Site ID) labels as well as the portions of parcels both inside and outside of site Ar_8496.

Figure 3: Attribute table for the output of Intersect

Here are a few notes about the output table fields:

The above table has all the necessary information to create the tabulation table shown in Figure 1 — it just takes a bit of work, work that the Tabulate Intersection tool does for you. The Using Intersect model available in the download shows how it’s done and outputs a table identical to that in Figure 1. In brief, here are the steps for transforming the above table into the tabulation table output by Tabulate Intersection:

Select By Location is available from the Selection menu in ArcMap and is frequently used to answer overlay queries. Can it be used to create the same output as Tabulate Intersection? The short answer is no—Select By Location selects whole parcels and does not split parcels based on the portion that is inside a polygon. This means that you don’t get the true area of intersection like you do using Intersect. Therefore, you can’t calculate the AREA and PERCENTAGE fields output by Tabulate Intersection.
However, Select By Location does work to give you a list of parcels that overlay sites (it just can’t calculate the area). But you have to pay close attention to the spatial selection method. Figure 5 shows the Select By Location dialog using the spatial selection method of “intersect the source feature layer”. 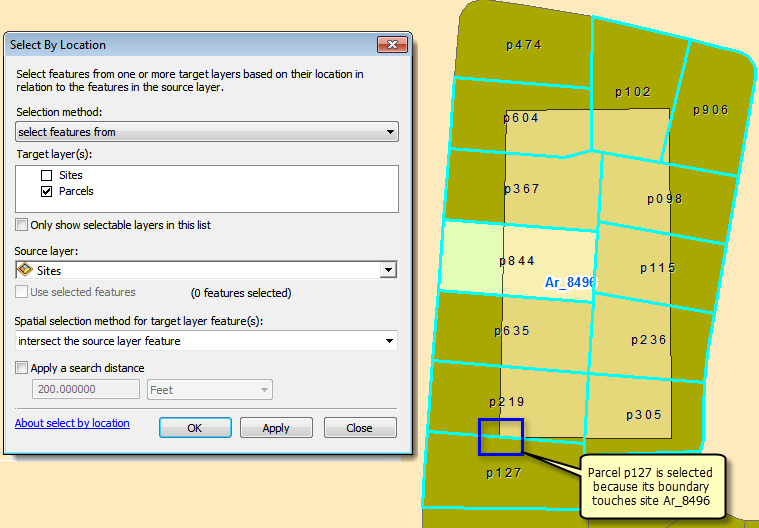 Why is there a difference? The answer lies in the spatial selection methods used by Select By Location. These methods are based on a set of rules for testing spatial relationships known as Clementini rules. In this set of rules, features whose boundaries touch are considered intersecting. The Intersect tool, on the other hand, does not consider polygons whose boundaries only touch to be intersecting. The best way to think about this difference is that the Intersect tool, when intersecting polygons, cannot create polygons from points, and polygons whose boundaries only touch because the result is a point, not a polygon. (Further details on these spatial relationships can be found here.)

Use ‘within a distance’ to emulate the Intersect tool

Figure 6: Using Select By Location with the ‘within a distance’ selection method

If you want Select By Location to ignore polygons whose boundaries only touch (like the Intersect tool), use the ‘within a distance’ spatial selection method and enter a small negative distance, as shown in Figure 6. 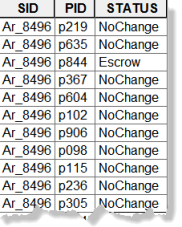 Select By Location simply selects features; it doesn’t transfer attributes between the target and the source layers. In the context of this example, this means that you can’t get a tabulation table of Site and Parcels IDs unless you’re willing to jump into ModelBuilder or Python and iterate over each Site feature one at a time, then use the Select Layer By Location tool to select parcels, then create and update an SID field. (The Select Layer By Location tool is the same as the Select By Location dialog accessed from the ArcMap Selection menu, and is used anytime you want to automate a Select By Location query with geoprocessing.) The model Using Select Layer By Location in the sample download shows how to do this in ModelBuilder. The output of this model is shown in Figure 7. The table is the same as shown in Figure 1, but with the AREA and PERCENTAGE fields missing because the necessary information—the portions of parcels that fall within a site—isn’t available to make the calculation.

The Using Select Layer By Location model is an interesting exercise in using iterators in ModelBuilder, but it’s complicated and of little use otherwise. So, rather than iterating over each site (which is slow), use the Spatial Join tool. 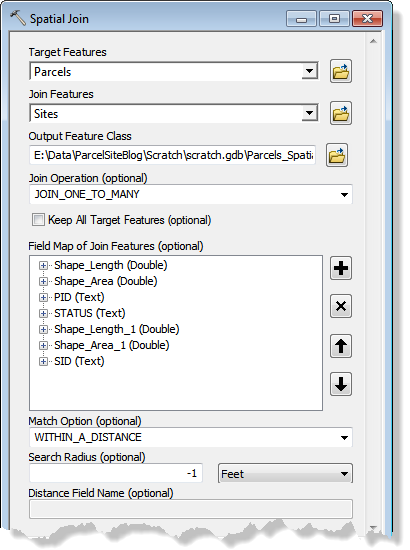 The Spatial Join tool uses the same spatial selection methods as the Select Layer By Location tool. The big difference is that it produces a new feature class instead of a selection of existing features, and attributes from the joined features are output to the new feature class.

Because Spatial Join doesn’t split features or apportion attributes by length or area, I like to delete any length and area fields as well as any field that should be apportioned by length or area. This prevents me from using these fields in calculations at some future time and getting the wrong results. 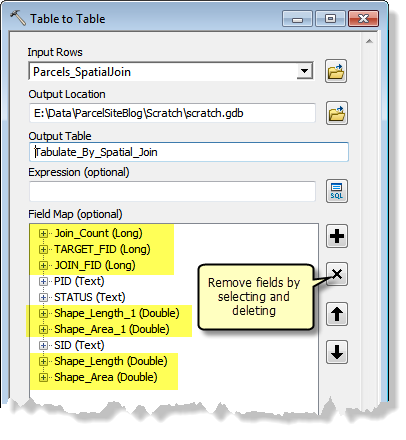 To create the tabulation table, I use the Table To Table tool to convert the feature class output by Spatial Join into a simple table (no Shape column). Table To Table, like Spatial Join, has a Field Map parameter that lets you remove fields from the output table. To remove a field, select the field in the Field Map parameter and delete it, as shown in Figure 9, where all fields other than SID, PID, and STATUS are removed.

Overlay is the bread-and-butter of GIS, and there are many ways you can get answers to overlay queries in ArcGIS—only a few were touched on in this blog. Whenever you have an overlay query to perform, you need to stop and ask yourself if features to be split so that correct area or length can be calculated. If so, the tools in the Analysis toolbox > Overlay toolset (with the exception of Spatial Join) are what you want to use because they overlay and split features to yield the correct areas and lengths. If you don’t need to split features in order to get area and length, then you have other options such as Spatial Join and Select By Location (and its corresponding geoprocessing tool Select Layer By Location). These tools have a lot of different spatial selection options and you need to be aware of their definition of ‘intersect’ — it’s different than the Intersect tool.

Next blog about overlay:   More adventures in overlay: splitting polygons with cartographic spaghetti 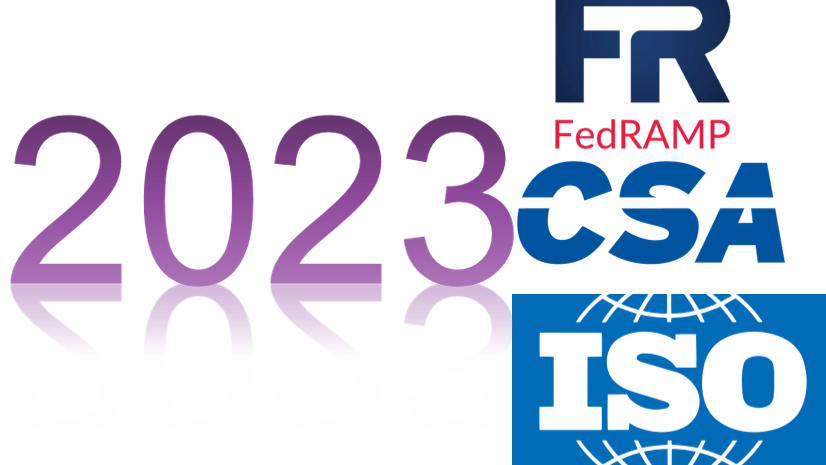