More adventures in overlay: Spatial Join and the Field Map

In my last blog post I showed how you could resolve 1:M relationships found in overlapping polygons using the spaghetti and meatballs technique. The model described in that post used used the sample  Concatenate Row Values  tool available from the Analysis and Geoprocessing Tool Gallery.

You can download the data and models I used in this blog here.

Figure 1 shows the goal: create non-overlapping polygons and calculate the combination of species within each polygon. In the figure, the legend shows all the unique combinations of species, with each species separated by a hyphen. The labels in the map are ‘stacked’—each species within the polygon is on a separate line (as opposed to a single line as shown in the legend). 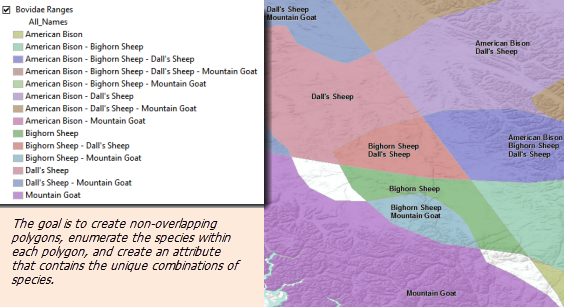 This post assumes you’ve read the previous post since I’m going to dive right into the use of Spatial Join.

The previous post showed the details of a model that created spaghetti and meatballs and then used Spatial Join to perform a point-in-polygon overlay. In that model, the Join Operation for Spatial Join was JOIN_ONE_TO_MANY and the result was a point feature class with one point for each overlapping polygon. In addition, each point had the species name (the ENGL_NAME attribute) of the overlapping polygon. Using the Concatenate Row Values tool, the All_Names attribute was calculated by appending the values of ENGL_NAME and separating them with ‘ – ‘ (space/hyphen/space). The result of Concatenate Row Value is shown in Figure 2.   This result table was joined the spaghetti polygons by ORIG_ID and the All_Names field was copied over to the spaghetti polygons to create the  map shown in Figure 1 above.

Figure 2: The All_Names field is a concatenation of the ENGL_NAME field for all records with the same ORIG_FID

The Concatenate Row Values tool works on any table and is useful for a wide variety of situations. But you can also configure the Spatial Join tool to do the same job with its Field Map parameter. Figure 3 shows a model that is exactly the same as the model in the previous blog post but with a different usage of Spatial Join. 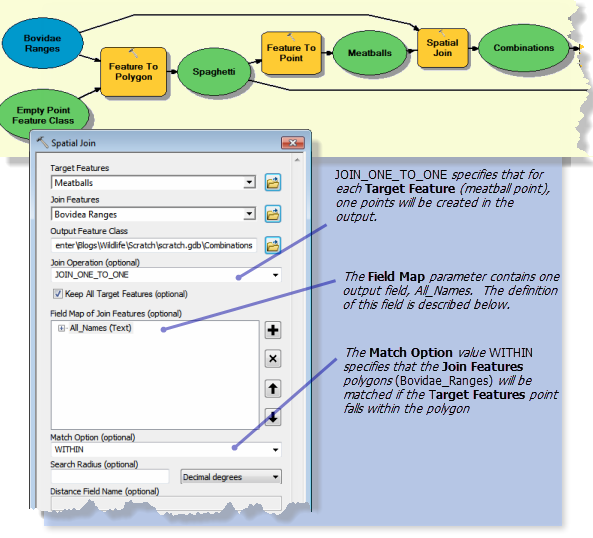 This usage of Spatial Join depends upon defining a new output field (All_Names) in the Field Map of Join Features parameter.  The first thing to do is to remove all the input fields from the Field Map control by highlighting the field and clicking the remove button.  Then follow these steps, all illustrated in figure 4. 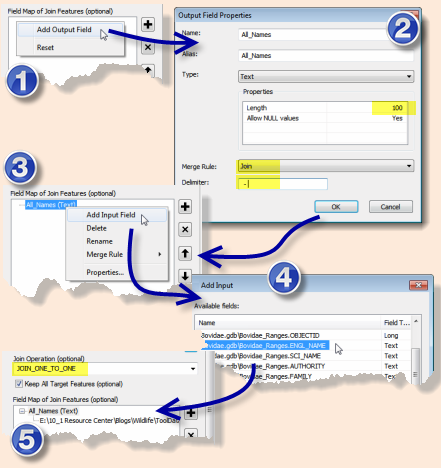 Figure 4: Adding a new output field that will concatenate the values of ENGL_NAME

In the model, the output of Spatial Join is a new point feature class named Combinations. Figure 5 shows the Combinations attribute table. As you can see, the values of ENGL_NAME are joined together and each name is separated by ‘ – ‘. Spatial Join determined the Bovidea Ranges polygons that enclosed each meatball point, gathered together the values of ENGL_NAME from each of the enclosing polygons, then joined these values together using the delimiter. 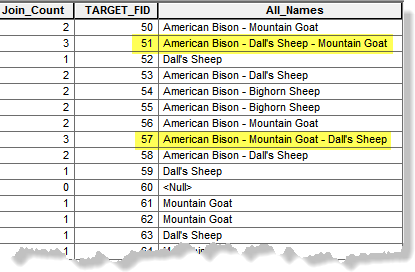 This is easy to fix using the Calculate Field tool and a bit of Python code, illustrated in Figure 6. 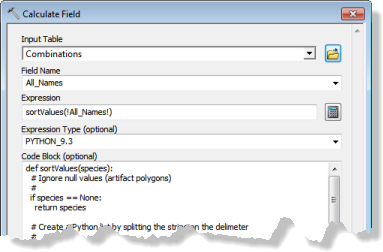 Figure 6: Using Calculate Field to sort the values of All_Names

The value of the Expression parameter is:

The code for the Code Block parameter follows.  This code block defines a routine named sortValues that is used in the Expression parameter.

Joining the meatballs back to the spaghetti

Just as with the previous post, artifact polygons need to be removed. In Figure 5 above, the record where TARGET_FID = 60 is an artifact polygon; there is no polygon in Bovidae Ranges that encloses the point. After joining and copying All_Names to the spaghetti polygons, the artifact polygons can be selected with the expression:

The previous post used the sample Concatenate Row Values tool while this post used nothing but system tools. Concatenate Row Values works on any table, such as one output by other overlay tools such as Intersect or Identity. The field map control is available in Spatial Join and a few other tools such as Merge, Append, and Feature Class To Feature Class. The choice of which technique to use is up to you. When creating a one-off model to be used with a specific set of data, I tend to use the Field Map method. But when my model is going to be used with a variety of different data with different attributes, I tend to use the Concatenate Row Values tool since it’s easier to change its simple parameters than manipulate a field map.

The next post in this series about overlay shows how to create a street intersection list by overlaying lines to create points at their intersections.