By Daniel Smith and Alex Quintero, University of Redlands, Masters of Science In GIS Program

In the first dot density mapping blog, we discussed the workflow for creating dot density maps using ArcMap.  In that discussion we emphasized the need for using exclusion or inclusion layers.  Here is an example of how we set up the inclusion and exclusion choices for mapping population density in San Bernardino County, the county with the largest land area in the conterminous United States. Because of its size and the fact that population is not evenly distributed throughout the county (rather, it is concentrated in the southwest corner, around where Redlands is located), this county exemplifies the limitations of dot density mapping without inclusions/exclusions when mapping population density at the county, the state or even the country level.

We first created a dot density map for San Bernardino County without any exclusions or inclusions using the county itself as the enumeration unit that the dot density was applied to.
This is what it looked like: 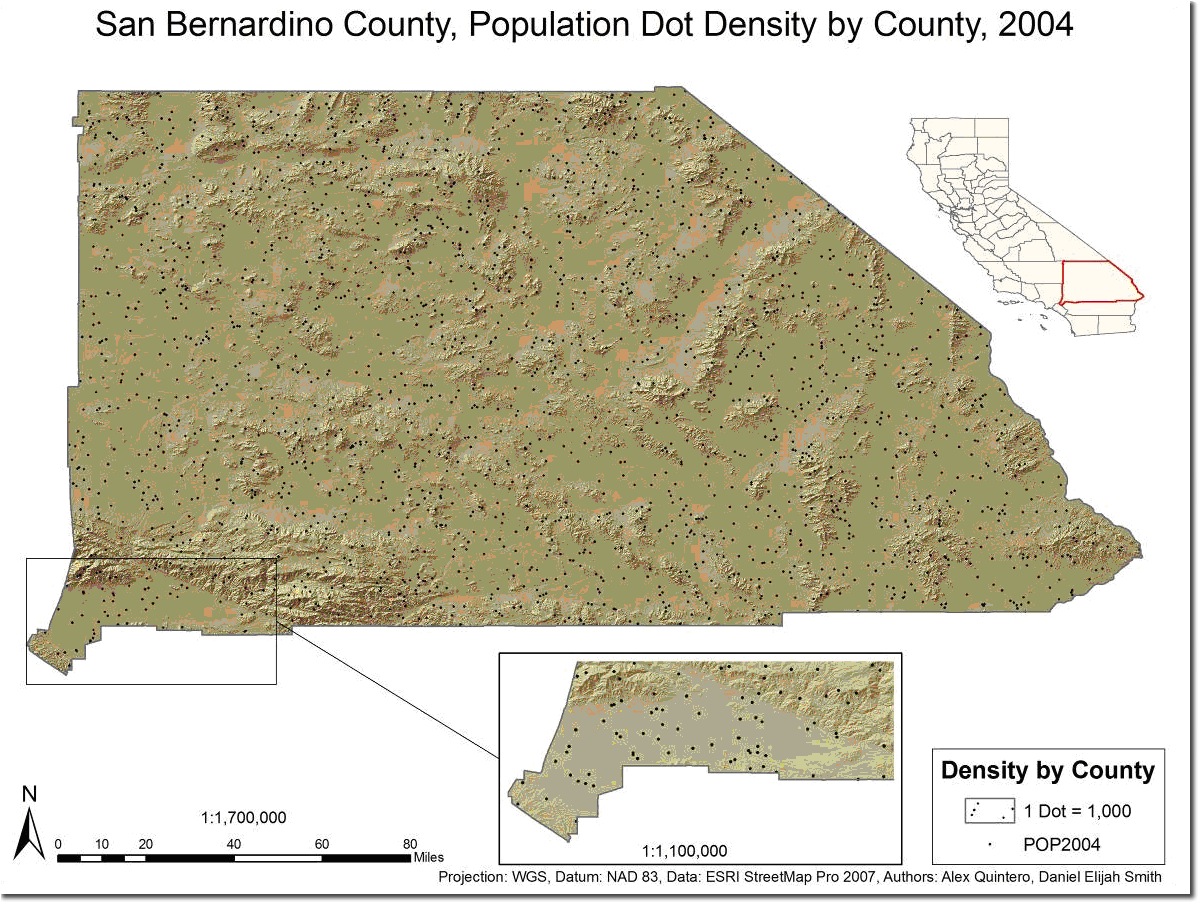 Clearly, this does not represent the population density pattern very realistically.  One “fix” is to use smaller enumeration areas, so we first tried census tracts: 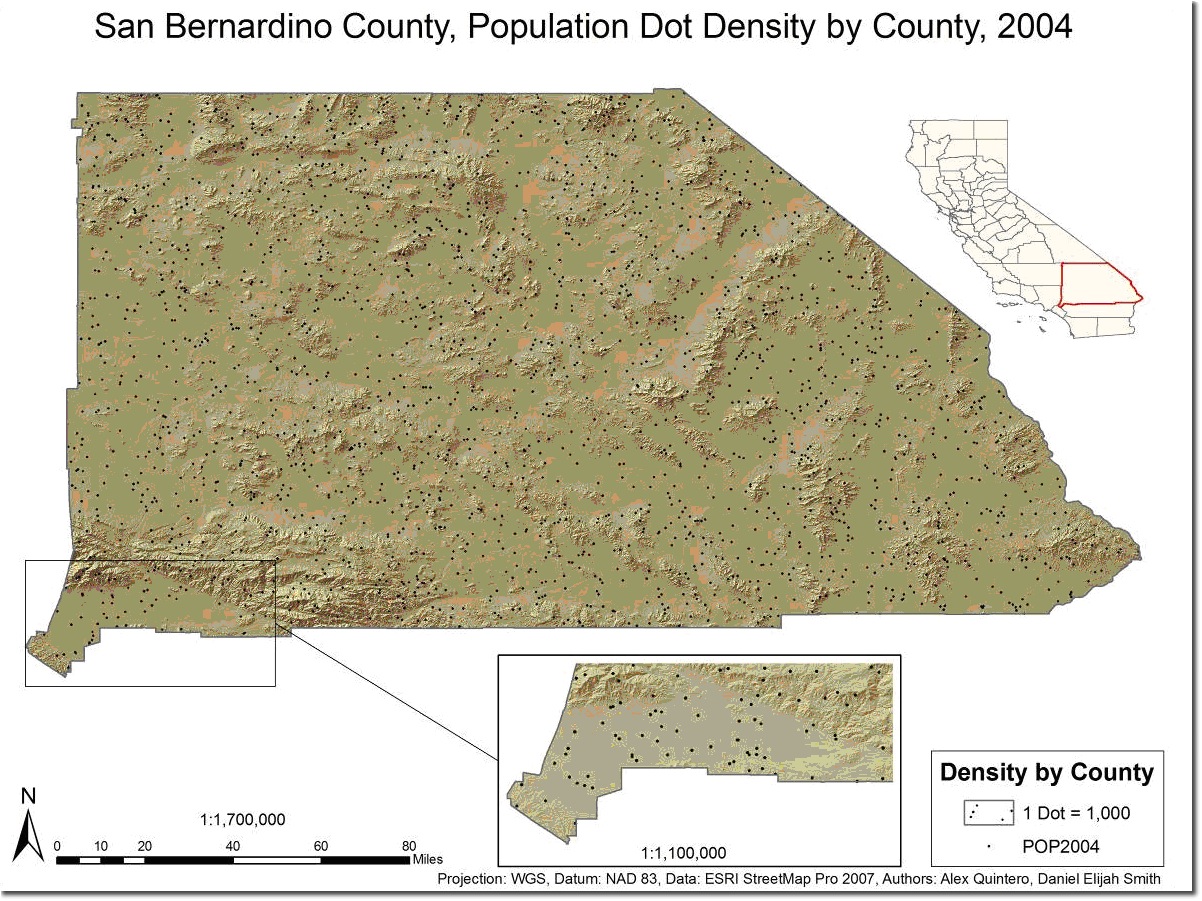 And then we tried block groups: 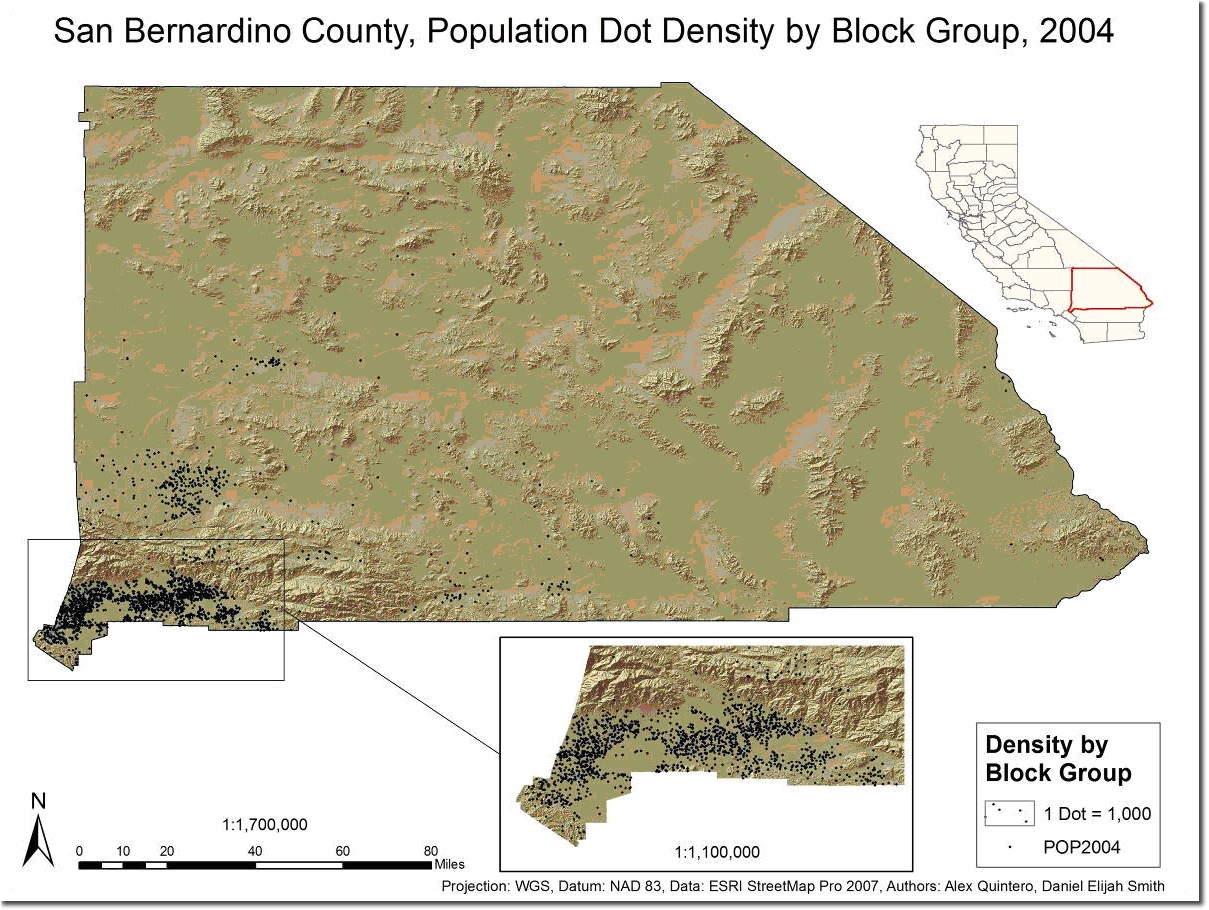 This was a big improvement over our first two maps, so we decided to do the exclusions and inclusions using these smaller enumeration areas.  The next thing we did was to determine areas of exclusion.  These included:

To create a single layer with these excluded areas we followed these steps:

To set the area of exclusion (that is, the masking) for areal feature dot density representation, here are the steps to follow: 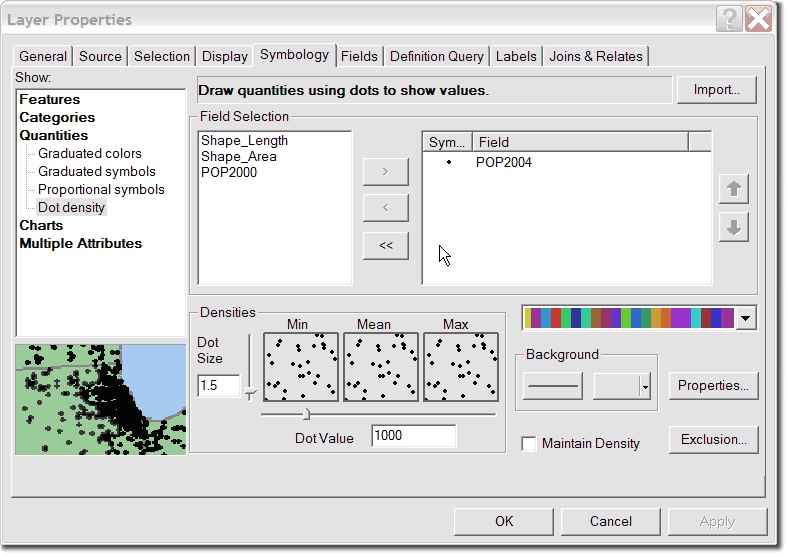 When we included the exclusion layer, we got this result: 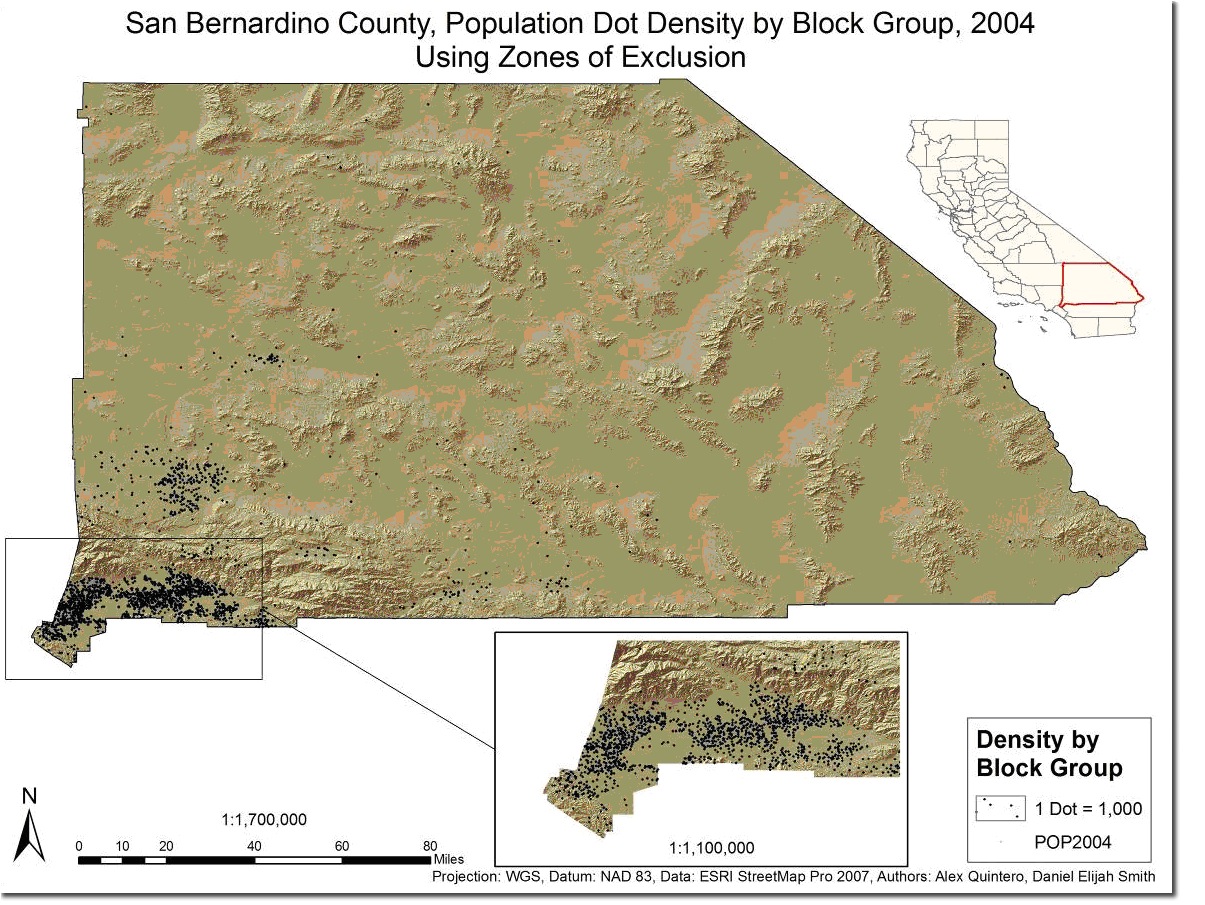 There is one additional step that we wanted to add to this analysis which was to INCLUDE certain areas. We theorized that people would live closer to roads rather than far away from them.  To do this, we needed to use two layers – the urban areas and the roads layers (from Esri Data & Maps StreeMap).  Here are the steps we followed to include areas near roads in the dot density analysis:

First we buffered the roads to a threshold that we determined made sense for our analysis. These are the steps we followed:

Here is the result we got using this inclusion layer: 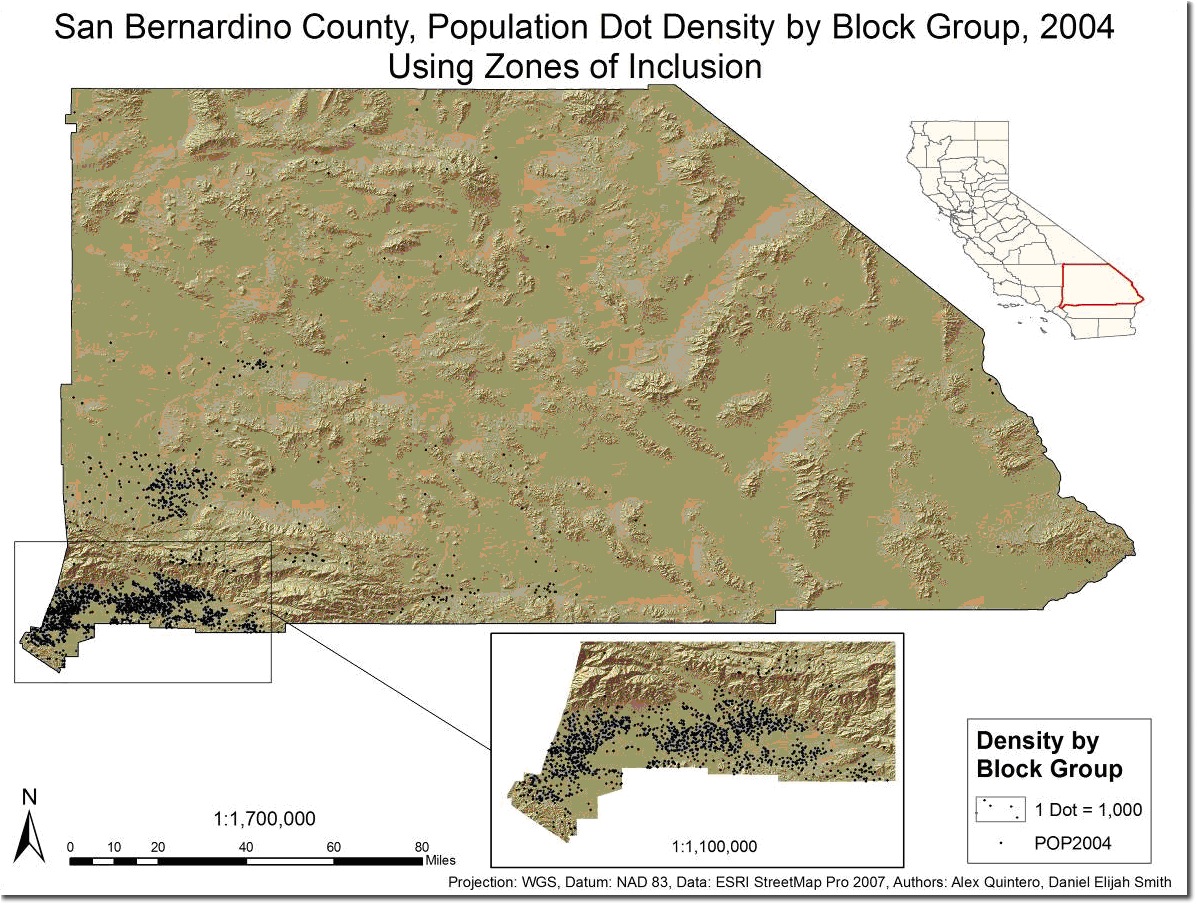 The final step is obviously to combine the exclusion and inclusion layers so we have one final layer to use in dot density mapping that represents the areas we know people NOT to be as well as we theorize more people TO be.  To do this we followed these steps:

This was our final result – a vast improvement over the map we started with for San Bernardino county! 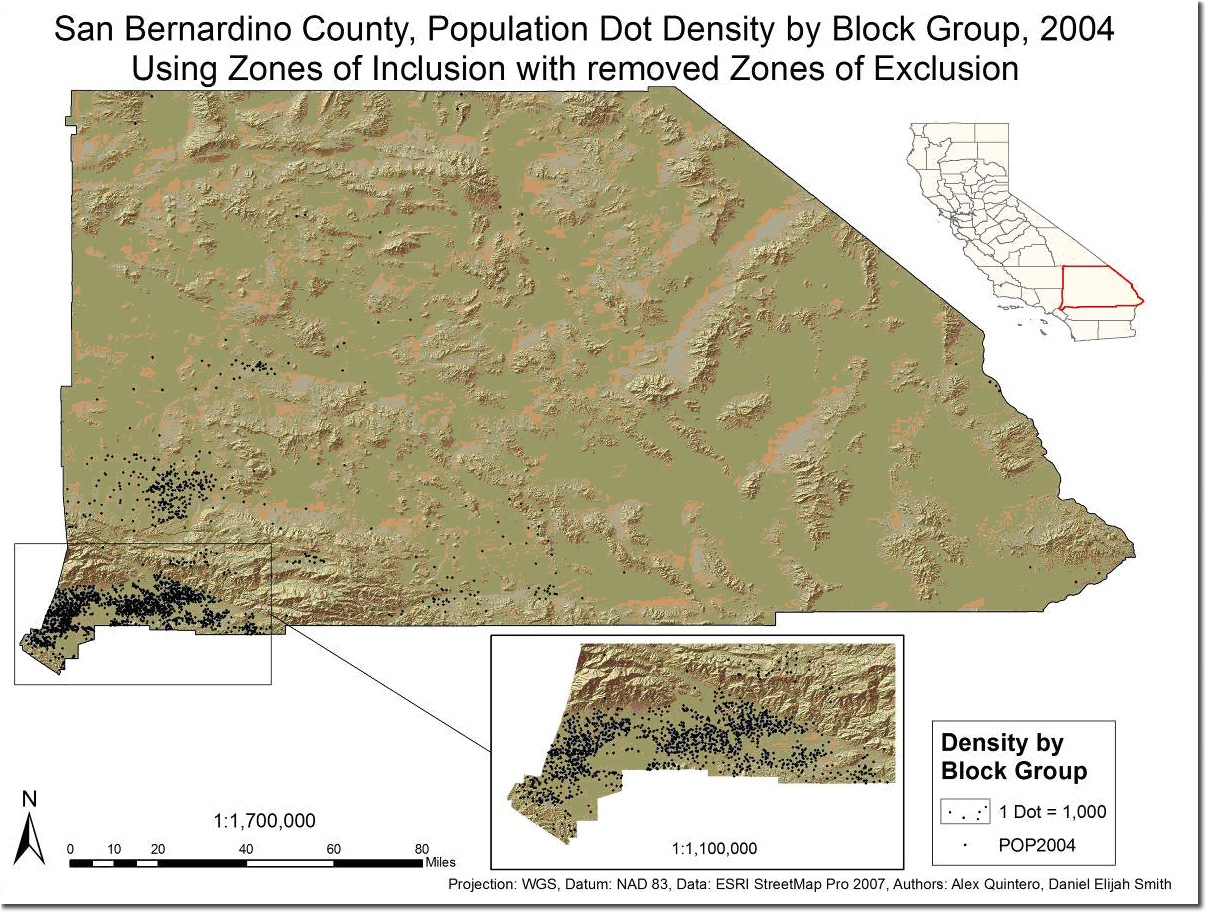 by Alex Quintero and Daniel Smith, students at the University of Redlands.