The Sacramento Regional Model (SRM) was developed on behalf of the City of Roseville to provide an analytical tool to support Aquifer Storage and Recovery (ASR) Operations and modeling efforts that are being conducted to maintain the quality and ensure the long-term availability of groundwater to meet backup, emergency, and peak demands. The SRM encompasses an area of approximately 1,360 square miles (871,000 acres), overlying the North American and South American subbasins of the Sacramento Valley Groundwater Basin, and the Cosumnes subbasin of the San Joaquin Groundwater Basin.

The SRM is a 10-layer model, representing five major stratigraphic units of the region.  The formations outcrop along the eastern side of the SRM domain. The incorporation of the geologic outcrops was essential to accurately represent recharge and stream/aquifer interactions to the appropriate model layer. The major formations are predominantly composed of silts, sands, and clays, generally low in permeability. 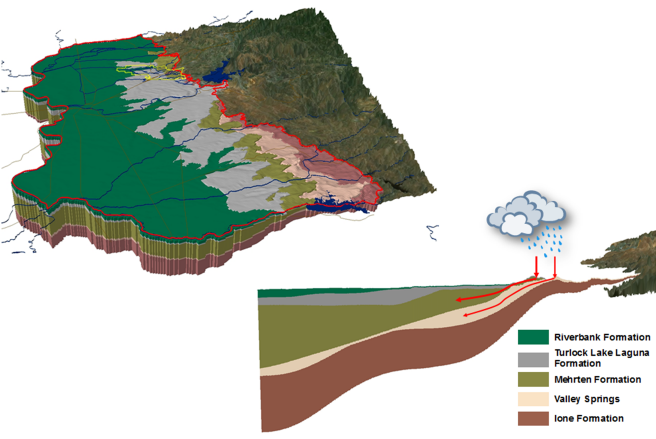 Hydrogeologic units in the SRM model.

In contrast to these low permeable sediments and surficial deposits, an extensive network of ancestral streams exists in the region that create an intricate network of high permeable fingers that weave throughout the low permeable deposits, providing localized paths of least resistance which are believed to play an integral role in the movement of both groundwater and contaminants in the subsurface. 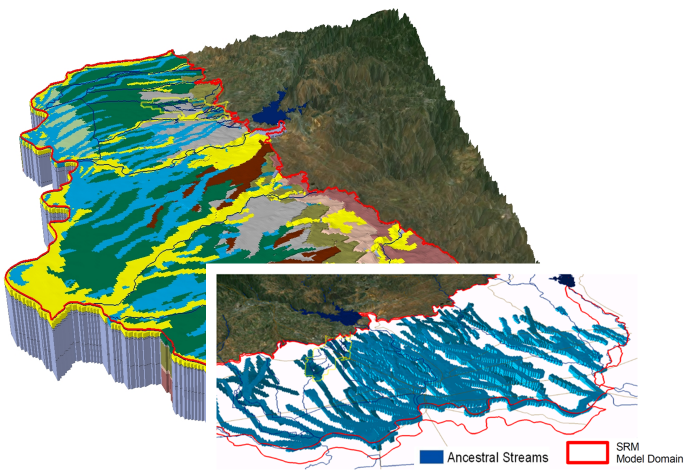 Ancestral streams in the SRM model.

The SRM utilizes GMS and Arc Hydro Groundwater (AHGW) for pre- and post-processing. GMS was used for the initial creation and calibration of the model, and the AHGW data model and tools were used to process, store, and manage model inputs and outputs for the SRM.

The development of the Arc Hydro Groundwater geodatabase was an iterative process; updates and modifications were done periodically throughout the calibration process.  The first phase of the Arc Hydro Groundwater geodatabase included compiling all of the wells in the region, including monitoring wells, supply wells, ASR wells, and exploratory wells. These wells were compiled from a variety of sources, including local municipalities like the City of Roseville, state agencies, including the California Department of Water Resources, and regional databases that were previously developed for regional water boards. The use of well information in the SRM was an important aspect of every phase of model development. During the development of model stratigraphy, well information was used to establish the vertical demarcation of stratigraphic units based on well driller’s logs, to establish areas of high and low permeability zones and for correlation to existing ancestral streams. 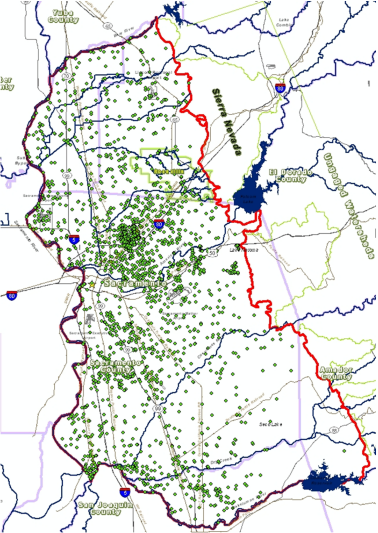 Wells in the SRM model.

The AHGW tools were used to generate cross sections, fence diagrams, and volume models for presentation of model layers at specific well locations or areas within the domain. This enabled good communication and validation of the model’s hydrostratigraphy while it was developed.

Based on the 3D hydrogeologic model, a numeric grid was created in GMS and a series of iterative simulations were performed for both the steady-state and transient models. The calibrated model was brought back into ArcGIS using the MODFLOW Analyst tools. Once inside ArcGIS, MODFLOW Analyst tools were used to create maps of model inputs and simulated results. For example, maps of calibrated water levels were created for specific model layers and for specific time periods. Using the controls available in the AHGW toolbar, one can toggle between stress periods and see the groundwater contours change, based upon the specified input period selected. 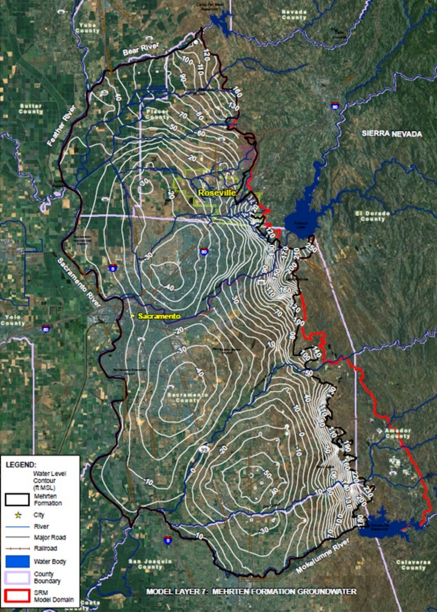 The AHGW tools support the integration of geospatial processing tools with groundwater modeling needs with an ArcGIS framework.  The ability to automate input features and complicated workflows provided a huge cost savings for the SRM project. The Arc Hydro Data Model provides the fundamental building blocks for a regional model that can be updated and shared across boundaries.  Arc Hydro Groundwater tools have revolutionized the way complex numerical models can be viewed, shared, and managed and has provided a strong foundation to support complex decisions to manage and protect the valuable resources for the greater Sacramento region.

A more detailed paper on the SRM was presented at the AWRA 2010 Spring Specialty Conference GIS and Water Resources VI in Orlando, FL.

A recent presentation on SRM from the ESRI 2011 user conference.