Developing an Inventory of Groundwater Resources for the Saguenay-Lac-Saint-Jean region, Quebec (Canada)

Introduction
A methodology based on a combination of “RDBMS (Relational Database Management System) – ArcGIS – Arc Hydro Groundwater (AHGW)” technologies is illustrated using data from an on-going project aimed at developing an inventory of the groundwater resources of the Saguenay-Lac-Saint-Jean region, Quebec (Canada).

The implementation of a spatial database has been mandated by the Quebec Ministry of Sustainable Development and Parks (MDDEP) for the Saguenay-Lac-Saint-Jean region (SLSJ) of the province of Quebec in Canada. This provincial project, known as PACES (“Programme d’Acquisition des Connaissances sur les Eaux Souterraines”), is being conducted in partnership with the regional municipal counties (MRC), the MDDEP, the City of Saguenay and the “Université du Québec à Chicoutimi (UQAC)”. The spatial database is intended to provide a regional picture of groundwater resources in terms of both their quantity and quality. This work involves the compilation of existing hydrogeological data as well as the collection of new data to complete existing information gaps. The final objective of the database implementation consists of characterizing regional aquifers and understanding associated groundwater flow systems. This provincial-scale project should improve our knowledge of regional hydrogeology and provide decision-makers with additional information for the sustainable management of groundwater resources. In order to illustrate the methodology of 3D hydrostructural subsurface modeling with AHGW, Chesnaux et al. (2011), selected a 225 km2 region centered on the municipality of Shipshaw in the SLSJ region. The Shipshaw area was selected for its large number (261) of boreholes available in the region. 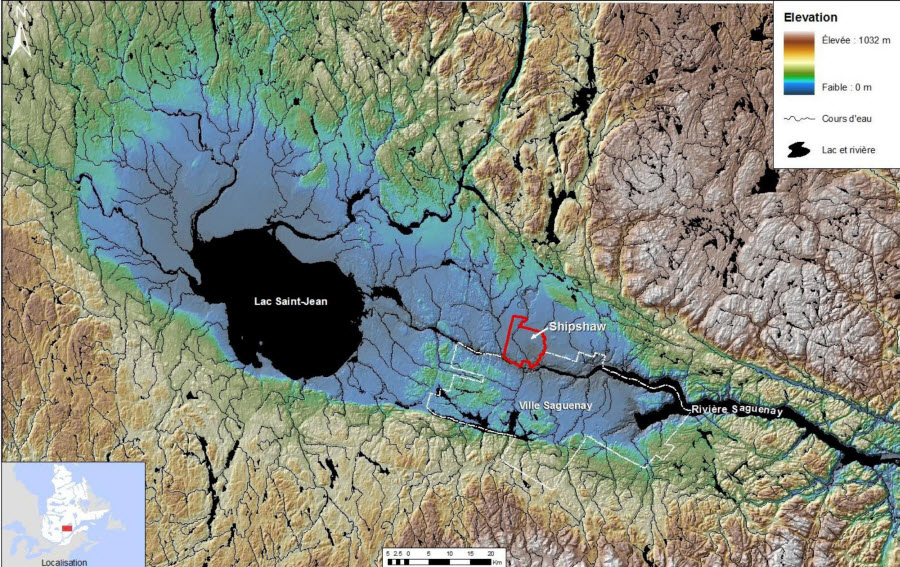 Location and digital elevation model (DEM) of the Saguenay-Lac-St-Jean region of Quebec and location of the Shipshaw study area (after Chesnaux et al., 2011). 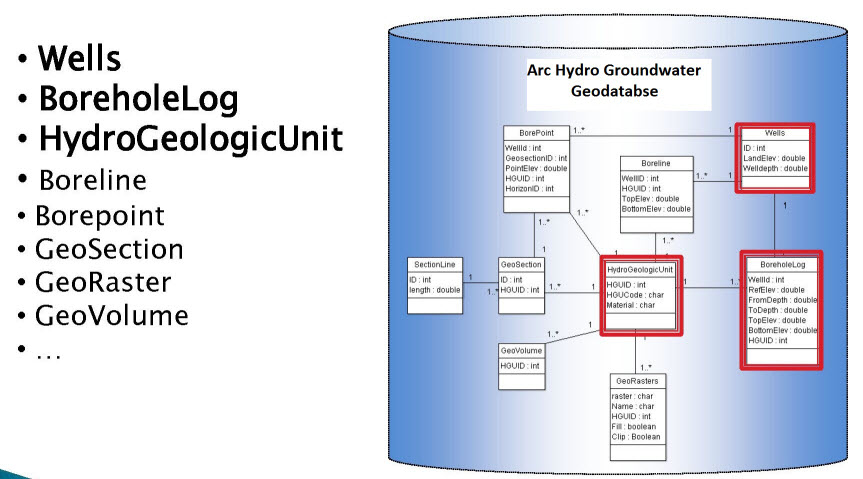 Borehole classification
The borehole editor tool available in the AHGW toolset allows for visualization of a borehole stratigraphy. Each hydrogeological unit encountered within the borehole is assigned a unique hydrogeologic unit identifier (HGUID) observed between a top and bottom elevation of the unit intercepted by the borehole. An original aspect of using AHGW is the concept of BoreLines. Indeed, the borehole data are stored linearly instead of punctually. Each 3D well feature is divided into segments (borelines); to each segment an HGUID identifier is assigned in order to identify the geological unit. BoreLines are created from the BoreholeLog table that presents borehole stratigraphy observed within each borehole.

Creation of 3D GeoSections from 2D Cross Sections
A cross section is a 2D representation; however with AHGW it is possible to transform several cross sections into 3D features (GeoSections) that can be viewed in ArcScene. A set of GeoSections can form a fence diagram. From the fence diagram we can assign a HorizonID (numbering system for layers) to each geological unit in each Geosection, an essential step for creating a Geovolumes (see next step).

Creating a 3D Model Including GeoRasters and GeoVolumes
A GeoVolume is a 3D feature for representing volumes within the subsurface. In order to create GeoVolumes, GeoRasters must first be created. A GeoRaster corresponds to the top surface of each identified geological layer; it is a raster surface for representing the top and bottom of hydrogeologic units. GeoRasters are created by interpolating points (BorePoints) derived from borehole stratigraphy and additional points sampled along GeoSection features. These points are created along a GeoSection at the top and bottom elevations of each layer and
characterize the geological unit with the HorizonID. In this example, Inverse Distance Weight (IDW) was applied to interpolate between the BorePoints and create a set of GeoRasters. This approach yielded the best results for our study area. Note that other interpolation options are also available within ArcGIS and may be evaluated independently based on the resulting outcomes. The GeoRasters are linked to a RasterCatalog which is used for storing, indexing and attributing the interpolated rasters. The RasterCatalog associates the identifier of a raster and the identifier of the geological unit. Using the AHGW tools one can automatically create GeoVolumes from GeoRasters.

Steps for creating a 3D subsurface model. From right to left: A set of GeoSections forms a fence diagram (these were created by transforming the 2D cross sections to 3D), GeoRasters are interpolated from the bore data and the additional points sampled along the cross sections, and GeoVolumes are created from the GeoRasters.

Discussion
A procedure using AHGW for the development of a hydrogeological model has been applied to identify aquifers and reconstruct their boundaries based on the geodatabase and 3D models. The construction of 3D models should help to better predict the extension and thickness of groundwater reservoirs, i.e. groundwater resources availability. Note that the accuracy of the 3D models depends on the amount, the nature and the quality of the information extracted from the geodatabase for incorporation into these models. A greater amount of available data permits more reliable predictions of groundwater resources and greater confidence for the modeler.

For more information on the Arc Hydro
Groundwater tools visit the Aquaveo website.

Special thanks to Dr. Romain Chesnaux for providing this post. Questions for Romain: Romain_Chesnaux@uqac.ca