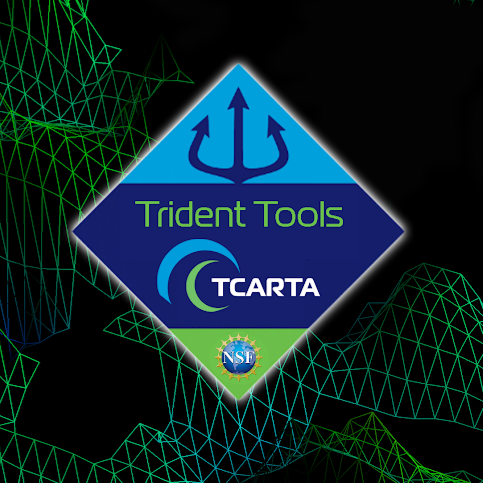 Contact sales@tcarta.com for any further assistance, feedback recommendations and questions.

The Trident Tools geoprocessing toolbox is licensed by a TCarta authentication API, separate from Esri licensing. Multiple ArcGIS Online user logins can access the toolbox on a single machine.  Licenses are associated with a TCarta user account and an authentication key-code, and currently are tied to the specific machine on which it is installed. Migration of a license to another machine necessitates contacting TCarta support. License authentication keycode provided by TCarta via email after purchase.

The in-situ Sample Tool allocates a percentage of input data points to  use with the Multispectral Bathymetry Tools for algorithm calibration and validation with the QAQC Statistics Tool. It will randomly split your data up into two datasets: Calibration and Validation that will be used in the other tools. You can determine the percent of data that goes into each dataset

TCarta’s Multispectral Bathymetry Tool- Ratio utilizes imagery and in-situ bathymetric point data to derive per-pixel depth measurements using a band-ratio algorithm. This tool will create your bathymetry surface and has the option to output statistics of your produced surface in the form of a points shapefile and a standalone table.

TCarta’s Multispectral Bathymetry Tool- RF utilizes imagery and in-situ bathymetric point data to derive per-pixel depth measurements using random-forest algorithm. This tool will create your bathymetry surface and has the option to output statistics of your produced surface in the form of a points shapefile and a standalone table.

TCarta’s QAQC Statistics Tool utilizes in-situ bathymetric point data to evaluate the statistical accuracy of a produced or acquired bathymetric depth surface. This tool will create statistics based on the Validation points produced by the in-situ sample tool or other available in-situ data. It will output QAQC statistics as a point shapefile and QAQC_QAtable, and is the same process as the statistical outputs from the MBT Tools.

Canada: Using multiple images and the Random Forest algorithm, 2m resolution SDB was produced from WorldView 2 and 3 and GEOeye-1 for Sidney Spit and Beaver Harbour, with SDB coverage totaling 5.71 and 42.25 km2 respectively. More than 4,500 independently derived ICESat-2 ground truth points ranging from +2.52 (above LAT) to 13.23m deep were used for calibration and validation.

Cape Cod: Over 2,0000 sq km of 2m resolution SDB produced from WorldView 2 and 3 imagery in the fall of 2020 using 55 images that TCarta tasked in the summer of 2020 to provide an up-to-date seafloor model in a highly dynamic area with strong currents, unconsolidated seafloor sediments and turbid waters.

Bathymetry at your Fingertips