Online hosting sites, such as Airbnb and VRBO, didn’t set out to disrupt local real estate markets. However, research shows short-term vacation rentals are becoming a major driver of rising rents and home prices in cities around the world.

In Hawaii, and Honolulu in particular, affordable housing has been hard to find for a long time. To combat this scarcity, and to balance the demands of residents versus tourists, the Hawaii legislature recently passed a bill, awaiting the governor’s signature, that requires hosts of short-term rentals to collect and pay lodging taxes. The Honolulu City Council just passed a bill that takes the more severe step of restricting the number of short-term rental units and fining violators up to $10,000 per day.

The state tax could raise considerable revenue as Honolulu is home to 800 legal vacation rentals and an estimated 8,000 illegal units. Restricting the number of short-term rentals should return some of these units to use by locals. To gain an understanding on these changes and how they impact citizens, city analysts and planners use geographic information system (GIS) technology. In Honolulu, GIS mapping and databases are available through the City and County of Honolulu’s Land Information System (HoLIS).

Our planners' eyes got really wide when they realized that they could quickly and easily change values in the zoning code and see what the difference in development would be.

According to a 2015 report, 66,000 housing units will be needed in Hawaii by 2025 to meet demand, with nearly 26,000 of those dwellings required in Honolulu. A number of proposed zoning changes aim to address this looming housing deficit.

Proposals include restrictions on the square footage of residential units to combat monster homes; an easing of height restrictions on low-rise apartments to allow five-story walkups rather than the existing three-story limits; and a proposal allowing home owners to build and rent accessory dwelling units.

The Honolulu Department of Planning and Permitting used 3D visualization tools to examine and visualize the proposed low-rise apartment zoning change in the neighborhood of Mo’ili’ili. Honolulu worked with Esri, piloting the capabilities of ArcGIS Urban and CityEngine in a recent webinar.

“We’ve been working to demonstrate to planners what the changes to our zoning code would look like in 3D,” Schmidt said. “Our planners eyes got really wide when they realized that they could quickly and easily change values in the zoning code and see what the difference in development would be.” 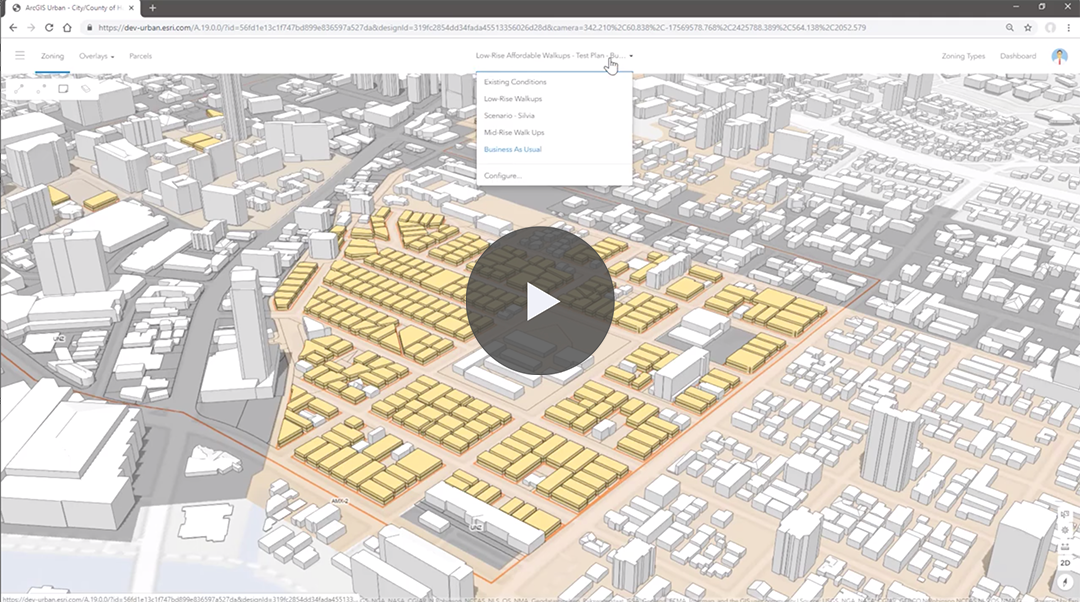 Metropolitan Honolulu is the fourth most densely populated area in the US, with traffic that often ranks among the worst in the country. The constraints of the island, with its narrow coastal plains, steep slopes and cross-island canyon connections cause much of this congestion.

The 20-mile, 21-station Honolulu High-Capacity Transit Corridor Project aims to help alleviate the problem by introducing elevated rail to the region. The rail corridor, under construction now, would move 8,000 people per hour and give Honolulu residents an opportunity to rethink development patterns. The city has already embraced Transit-Oriented Development (TOD) as a strategy to increase the density of housing, jobs, and services around rail stations.

“We’ve been working with the TOD division to look at changes in zoning laws to provide incentives for development within a half mile of station locations,” Schmidt said.

Schmidt and his team created a participatory environment that allows government, business, and community stakeholders to visualize TOD redevelopment scenarios and rezoning proposals.

As Honolulu begins the build-out of the new rail line and associated development, officials are looking to improve the city’s permitting process.

“Anybody who tries to get a building permit usually has some challenges,” Schmidt said. “That’s primarily due to the amount of volume as we have from 15,000 to 20,000 permit applications per year. Anything we can do to help streamline that process or make it easier is one of our major objectives.”

The city was an early permitting innovator with a system called HONLine that allows home owners to quickly obtain permits for such things as fencing, solar panels, water heater replacements, or other minor upgrades to residential property.

“GIS plays an important role [in HONLine] because we have to check to see whether that property might be in a flood zone, along a coastline, or how it’s zoned,” Schmidt said. “The integration of the permitting system with our GIS was critical in our ability to be able to put those permits online.” 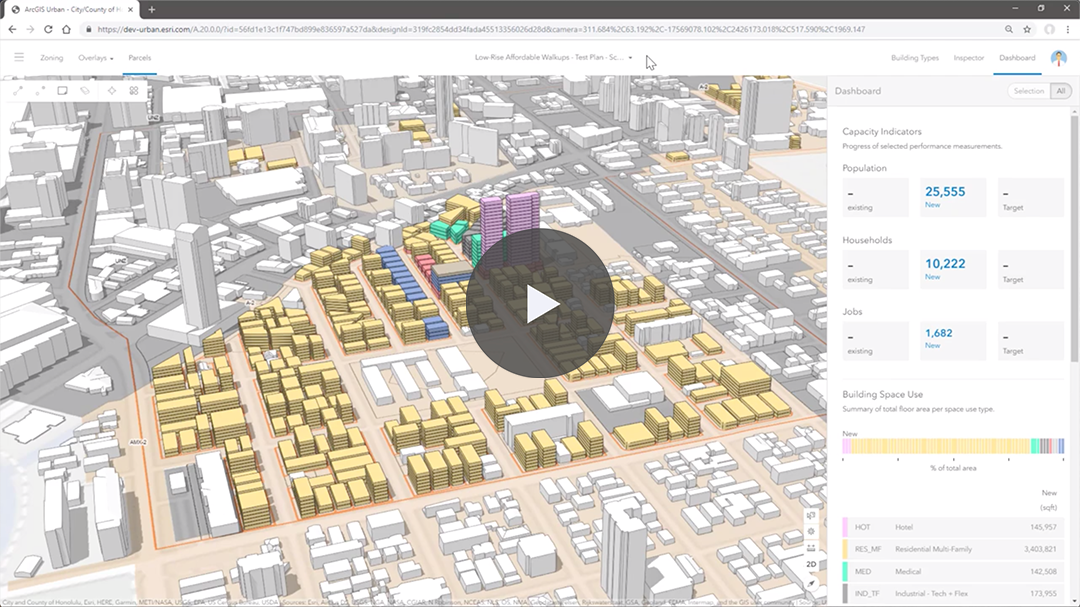 Next, Schmidt and his team hope to tackle improved business workflows for new development by incorporating digital building information models (BIM) within GIS as part of the permit review process. Digital BIM files would replace the paper plans in use today. A new all-digital workflow would provide a means to streamline building code assessments and automate the detection and notification of any conflicts.

While ongoing development and redevelopment in Honolulu have considerable impact on the local economy, GIS provides the means to quantify it.

The impact of new apartments, on both the affordable housing issue and the overall city economy, is one of the factors driving the city to recently adopt the proposed walk-up apartment zoning change. Many more ideas are coming forth to deal with the state’s housing crisis.

“A variety of different creative and innovative—and somewhat haphazard—proposals are coming forth,” Schmidt said. “Each proposal needs to be analyzed using GIS to see potential impacts and to communicate the results to the public.”

Hawaii Imagery and Elevation as a Service

The State of Hawaii has made considerable investments in collecting and sharing both imagery and 3D elevation data in addition to traditional vector GIS data. This effort eases the burden on cities and businesses in the state that need this data for planning decisions.

“Making the highest quality authoritative data available to our statewide GIS users, as well as to our government partners and to the public is a top priority for the program,” said Joan Delos Santos, Data Manager for the Hawaii Statewide GIS Program, Office of Planning.

Staff at the Hawaii Statewide GIS Program processed data from LiDAR sensors, creating an application that makes available for download all known LiDAR datasets collected in Hawaii from 1999 through 2017. They then created a number of 3D data products that include a one-meter resolution Digital Terrain Model, a Digital Surface Model, and an elevation service. The services and derived layers, such as 3D building models, can be consumed by applications and programs, such as ArcGIS Urban, to provide 3D context to visualize and add greater details.

The city of Honolulu takes advantage of this data in its visualization efforts.

“We have an excellent level of cooperation and data sharing among state and county agencies in Hawaii,” said Ken Schmidt, GIS administrator, City and County of Honolulu. “We actively share our information with the state and the state shares with us.”