With a rich history that began with cowboys and Indians riding the plains and the deserts in the 1800s, San Juan County in New Mexico has grown to be a thriving region with more than 125,000 residents, based on the most recent Census Bureau estimate. The budding population means demands have grown for the local government, which strives to provide residents with the best in services, public safety, and family values.

Protecting the environment is a top priority for the local government, to promote the health of residents and keep the scenic rivers, mountains, mesas, and badlands of San Juan County healthy and flourishing for years to come. One significant issue impacting the environment was the illegal dumping of trash, which county residents expressed concerns about during a past public forum on the local recreation industry.

Due to the lack of a residential trash collection service, residents of the county’s rural communities take their trash to local transfer stations and the county then takes it to a landfill. But illegal dumping was—and still is—widespread.

Results
A mobile app which has led to the clean up of more than 127,000 pounds of trash

Law enforcement uses the app to investigate incidents of illegal dumping and prosecute offenders. Dumping on public lands is a criminal offense in the county punishable by a $1,000 fine and/or a maximum of 90 days in jail. As such, the information provided by users is crucial to investigations. According to Snell, the form didn’t fit the needs of law enforcement, who wanted different fields for residents to complete than what the story map provided.

The initial app was not easy to access. Previously, a user would have to bookmark the URL onto their phone and try to access it wherever they were, and if there was no cell service, Snell notes the user would have to hope they remember the site to report later. This meant sites would either not be reported at all or the location would not be reported accurately, causing setbacks in investigations.

Snell set out to revamp the app and tailor it to the needs of both law enforcement and general users.

Snell chose AppStudio for ArcGIS to create a new app that would increase accessibility and allow for improved reporting. AppStudio for ArcGIS is a low-code/no-code platform for creating native apps, offering tools for everything from deployment to testing. She chose this solution because she was already a user of ArcGIS Online, cloud-based GIS mapping software, and ArcGIS Enterprise, a mapping and analytics platform, and knew the tool would seamlessly integrate into her existing platform.

Snell read documentation and watched YouTube videos to learn how to use this solution, and online tutorials were key in getting the revamped app into app stores, including the Google Play and Apple App Stores.

“I'm not the type of person to download the source code and [create a new app]. I need something easy, and AppStudio for ArcGIS was easy for me to use,” says Snell. “Since I’m not a very technical person, this was a huge step for me.” 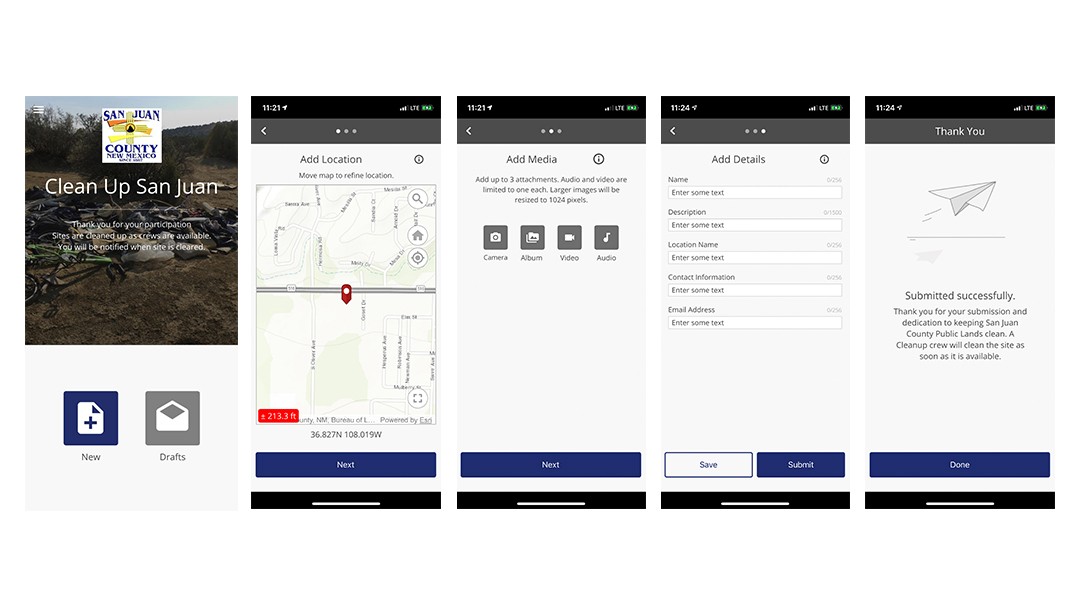 Residents submit sites through the app, adding a location, media, and additional details, before submitting it to the county.

The new Clean Up San Juan app was launched in May 2019. Once illegal dumping sites are reported by the public, Snell and other staff evaluate the claim based on the completed form and the uploaded picture or video. They then turn submissions, complete with details like GPS coordinates, to the sheriff’s department for investigation. For submissions without these details, county staff use Workforce for ArcGIS to assign cleanup tasks and dispatch detainee cleanup crews to clear the sites.

“AppStudio for ArcGIS is…easily my favorite tool to have in my back pocket. It makes me look like a rock star,” says Snell.

With the new Clean Up San Juan app’s improved accessibility and reporting, more than 127,000 pounds of trash have been cleaned up from illegal dumping sites across the county. Since users can simply download the new app from an app store, they no longer have to find the link on the county website and try to save it for use later when submitting a claim.

“AppStudio for ArcGIS really took out a lot of the hoops that people had to jump through to use it,” Snell says.

San Juan County officials are receiving positive feedback from the residents and county visitors using the app. The app has been downloaded around 500 times between the Android and iOS platform and the number continues to rise. Snell says, “It’s a great tool for the community, and it’s amazing how supportive everyone has been. The community loves it.” 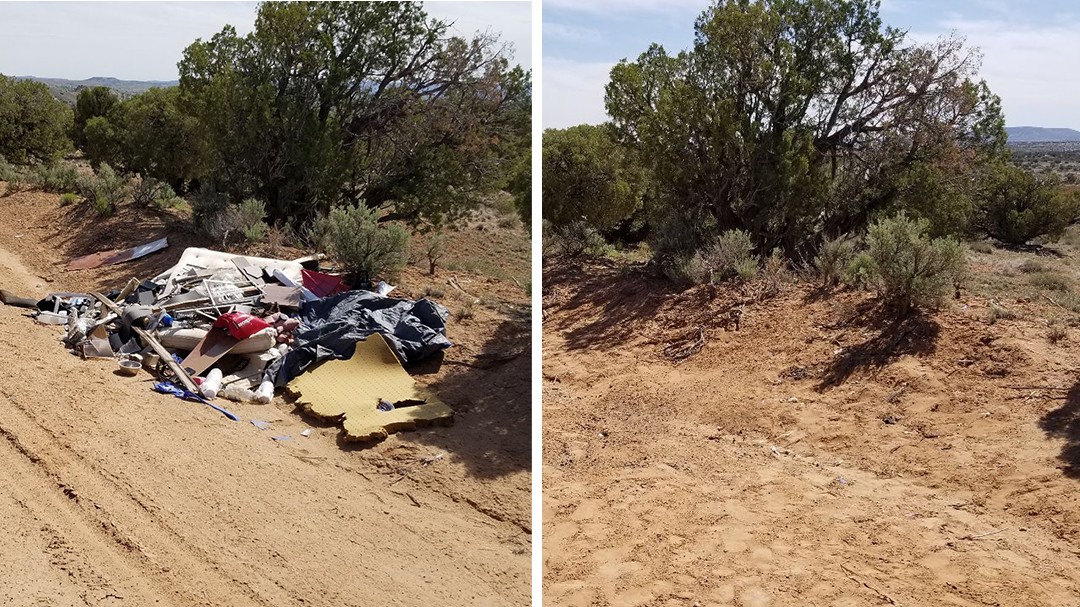 Before and after photos of an illegal dumping site submitted through the Clean Up San Juan app.

The new app is also a helpful tool for local law enforcement and the County public works department, giving them more information to better do their jobs. When submissions have specific site details, the county sheriff’s office can more easily investigate claims, which also helps the district attorney build a successful case against an alleged violator.

Previously, users would call into the county Solid Waste Department to provide a latitude and longitude and staff would enter the coordinates into a mapping program to try and locate the site. With AppStudio for ArcGIS, the process is streamlined with electronic submissions. Users can now add a photo or video and the map automatically retrieves a person’s exact location, which improves accuracy for finding sites. Snell also receives submissions in a timely manner and is better able to direct the request to the appropriate stakeholder. This dashboard shows the location and status of reported trash sites, while keeping track of the number of pounds of trash cleared.

“AppStudio for ArcGIS is pretty accurate. Depending on where the cell towers are, we’re probably 95% accurate on [locating sites]. And now our cleanup crews have everything they need on their phone,” says Snell. “If they need to contact the person that submitted [the site] and they entered their contact information, they can call them while they're out in the field for more information.”

With information on the Clean Up San Juan initiative available via an online dashboard, built using ArcGIS Dashboards, transparency has greatly improved, which Snell says has improved morale. “For the most part, people are just very appreciative that we are trying to make this place better. AppStudio for ArcGIS is helping us make a difference in the community,” she says.

Our public works department has a lot more resources for their public land cleanups and they're loving it. AppStudio for ArcGIS is giving people the tools that they need at their fingertips, and it's been fantastic.

Build your own mobile apps