Milwaukee County, the First Jurisdiction in the Nation to Declare Racism a Public Health Crisis

Milwaukee County, Wisconsin, is faced with the need to address racial inequities within its communities, just like every other county in the nation. However, Milwaukee County is Wisconsin's most populous county and—with some of the state's largest racial health disparities—one of its least healthy. Milwaukee County staff members saw it as their responsibility to seek solutions that would address racism at all levels within the local government. Milwaukee County has since adopted the vision that by achieving racial equity, it will become the healthiest county in Wisconsin.

One of the most innovative approaches the US has seen to address health inequities occurred in 2019, when Milwaukee County became the first jurisdiction in the nation to declare racism a public health crisis. Setting a goal to make Milwaukee County the healthiest county in Wisconsin, staff members realized that the county would first need to achieve racial equity, which would require a cross-divisional effort. They recognized that the most significant racial disparities affecting the health of the county's communities were the disproportionate mortality rates among African American residents, and income inequalities.

Established two years prior to the declaration, Milwaukee County's Office on African American Affairs (OAAA), now known as the Office of Equity, played an integral role in setting the county on course for recognizing and reducing racial inequities, which would require the following:

Immediately after the declaration, OAAA created a racial equity ambassador program in which thousands of employees from multiple departments participated in a 90-hour training on how to achieve racial equity. The sentiment was that employees in every department and division needed this training to advance racial equity within their own workplaces. Ideas about different approaches were exchanged through this training. OAAA also facilitated the integration of racial equity into the county's new employee orientation. Over the course of 2019, 95 percent of all county employees assigned to racial equity training had completed it.

Milwaukee County staff members knew they had to turn their efforts into further action. To do so, they would need to rely on data that showed them where health and racial disparities were throughout the county so that they could allocate resources to these impacted areas. The county turned to geographic information system (GIS) technology for this data.

The Essential Role of Geography in Achieving Health Equity

Geography helps users investigate a lot of unanswered questions. For example, it is not enough to say that African Americans are dying early at disproportionate rates. The question is, Where are they dying, and what resources can be placed there to prevent this disparity?

The county was faced with such a question in the midst of the COVID-19 pandemic. Reporting COVID-19 infection and mortality rates—without the spatial and demographic context that comes with seeing which communities were being affected the most—was not enough. Milwaukee County turned to GIS to map the pandemic. Feeding COVID-19-related data and filtering it by race in ArcGIS Dashboards, and thus providing a visual display that presents data and patterns in an easy-to-read fashion, ensured that the county was looking at the effects of COVID-19 on all demographics.

"The county asked itself, 'How do we report COVID-19 data?' And it was kind of a no-brainer to report counts per race and ethnicity," stated Zac Swingen, GIS specialist for Milwaukee County Office of Emergency Management (OEM). "Some thought this might have stigmatized the communities, but the county felt that the overall result and seeing this data on a map would allow us to tailor strategies based on this information."

"The county asked itself, 'How do we report COVID-19 data?' And it was kind of a no-brainer to report counts per race and ethnicity. Some thought this might have stigmatized the communities, but the county felt that the overall result and seeing this data on a map would allow us to tailor strategies based on this information." 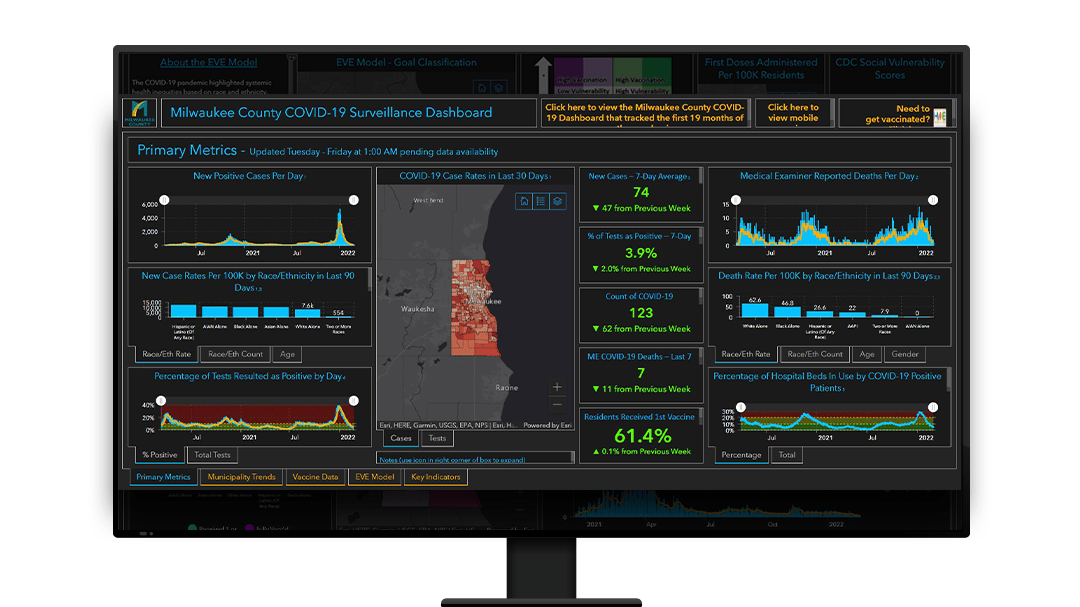 Mapping COVID-19 cases by race and ethnicity provided the data Milwaukee County needed in order to tailor interventions to address the pandemic equitably. The OEM refocused its COVID-19 spatial data and created the Evaluating Vulnerability and Equity (EVE) model within the dashboard. While COVID-19 was a driver for the county to move in a different direction, the EVE model provided the county with a new perspective on how to allocate resources. 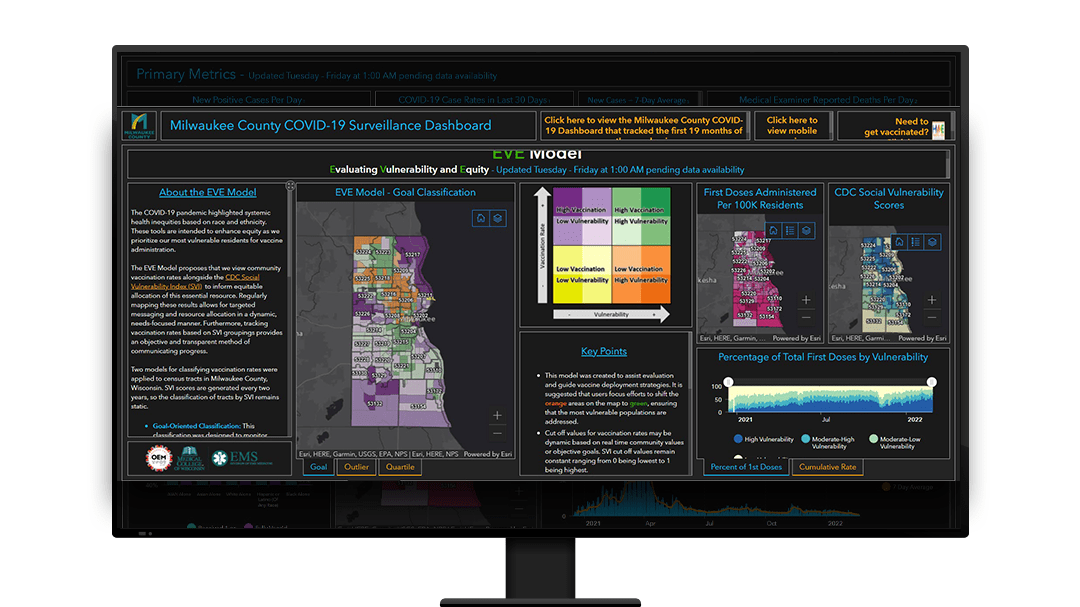 The Use of Spatial Data to Influence Policy Makers

OEM shared its findings with Milwaukee County executive David Crowley, who was then able to take this location-based data to the State of Wisconsin. Seeing the disparities between who was most vulnerable and who had access to the vaccine, the county was able to convince the state to open vaccine eligibility early for residents of the most vulnerable communities. 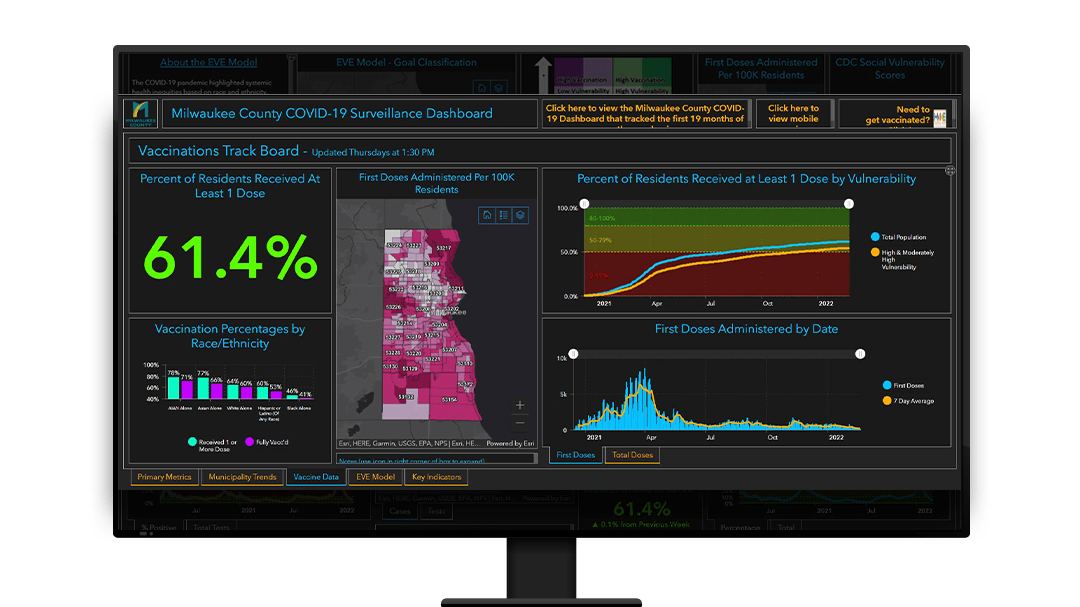 With the use of GIS, the county was able to provide policy makers with data outlining where it's necessary to address COVID-19 health inequities. Being able to tailor spatial data has encouraged departments throughout the county to rely on GIS for future decision-making regarding health equity.

"There is a hunger for GIS insight now. Stakeholders throughout the county see how GIS helps create targeted solutions for their problems, and we are seeing a lot more cross-divisional collaborations," stated Swingen.

From managers to frontline workers, the county is now seeing a joint effort to address racial inequities by creating targeted, location-based solutions.

Milwaukee County set the precedent on how to ­­­address health equity as a public health crisis and continues to make progress with the use of location intelligence. Aside from employing racial equity trainings and creating the racial equity ambassador program, the county is moving forward with additional measures to address racial inequities.

A measure currently in sight is to create and update the Milwaukee County Strategy Dashboard, which will showcase metrics essential to measuring the health of Milwaukee County and serve as a transparent resource for members of the public to monitor progress. Currently, the strategy dashboard displays workforce data, overdose data, and medical examiner mortality data. The Office of Emergency Management hopes to launch an additional dashboard to map all emergency management service (EMS) activities and create targeted solutions from the office's findings.

With the use of GIS, Milwaukee County is working toward becoming the healthiest county in Wisconsin. Learn how you can address health equity in your community with location intelligence.

"There is a hunger for GIS insight now. Stakeholders throughout the county see how GIS helps create targeted solutions for their problems, and we are seeing a lot more cross-divisional collaborations."

Moving Toward Health Equity Through GIS