In the summer of 2020, two devastating wildfires in Northern California burned thousands of acres, destroying structures and endangering countless homes and lives. The North Complex Fire that burned in Butte and Plumas counties and the CZU Lightning Complex Fires in San Mateo and Santa Cruz counties were devastating wildfires that required a prompt and organized response from local emergency response teams. To assess damage from the fires and aid in response efforts, law enforcement needed a better way to view the area.

Drones are increasingly becoming an important part of disaster response and can help with a range of response efforts, including providing rapid situational awareness for emergency personnel and creating maps of impacted areas. In response to the aforementioned fires, GeoAcuity was tasked with obtaining aerial images of the impacted areas captured using drone technology. GeoAcuity is a geospatial consulting firm focused on providing high-quality solutions to the environmental, municipal, and federal government sectors.

To incorporate geospatial support into the local fire response process, GeoAcuity deployed cloud-based drone mapping software to aid in emergency response efforts and provide law enforcement and other agencies with the imagery they needed for fire damage assessments and to boost recovery efforts.

According to Greg Crutsinger, PhD, director of applied research at GeoAcuity, "Drones are amazing storytelling tools. We're just taking that storytelling capability and we're trying to add more quantitative angles to it with maps and models." 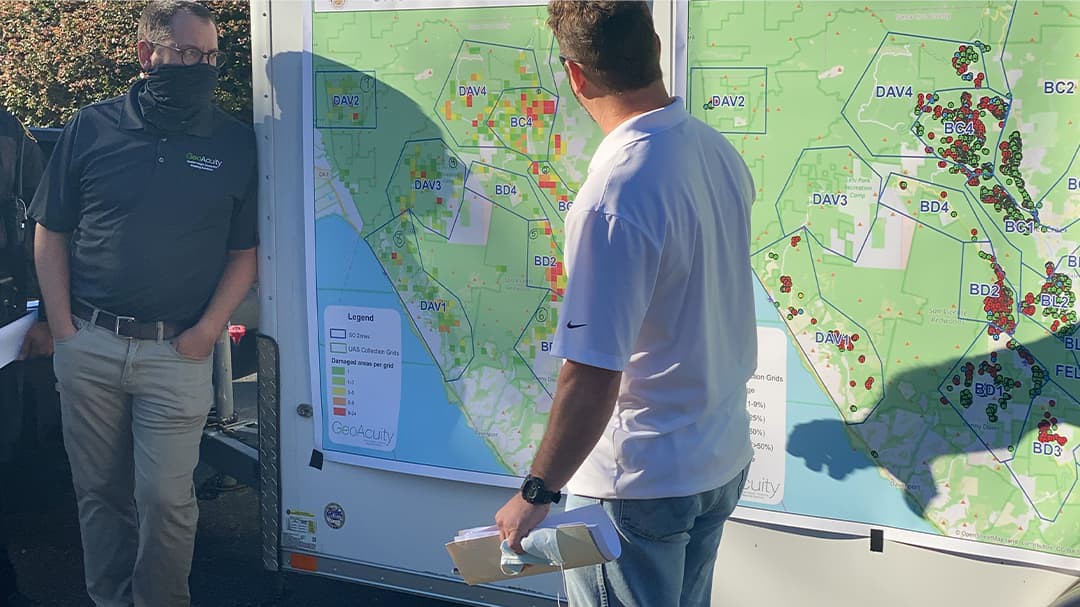 The team planning the missions for the day

According to Jason Knowles, PhD, CEO and founder of GeoAcuity, the firm wanted to provide law enforcement and disaster response groups more geospatial support for fire response throughout the entire process. The fire response process requires proper planning and efficient management to ensure maximum value in the deliverables. Preflight mission planning must be able to ingest flight areas into mission planning software to define the areas where imagery was to be captured, and postflight operations must include the management of imagery data and project metadata to be uploaded to the cloud for processing.

Previous methods used in prior fires were lacking in geospatial support, oftentimes defining areas of interest that have been or still needed to be captured on a single paper map with masking tape or in one case a yellow crayon. This process was not the most efficient when trying to communicate with a multitude of groups and agencies in an emergency situation.

Essentially, GeoAcuity wanted a new solution to easily define, capture, and process imagery for emergency response teams. "There are certainly physical challenges during a wildfire with smoke and visibility, falling trees and power lines, heat, and now working together during a global pandemic. Those are enough to try to tackle without worrying about what are you going to do with all this imagery," says Crutsinger.

Law enforcement approached GeoAcuity to gain more coverage of the areas impacted by the North Complex and CZU Lightning Complex Fires, but there are many use cases for aerial imagery. Drone-captured imagery and data are valuable for law enforcement, public safety, management of the cleanup process, and efficient response from insurance companies to support their policyholders.

To support these goals, it was important for GeoAcuity to easily share processed imagery with multiple users. Crutsinger says, "Our goal is also to be able to share the data as broadly as possible to as many stakeholders as possible. [We asked] how do I then visualize them in a way that all the agencies are going to understand?"

The team at GeoAcuity chose Site Scan for ArcGIS to collect, process, and analyze drone imagery. Site Scan for ArcGIS is an end-to-end, cloud-based drone mapping software designed to aid in planning flights, processing images to generate derived products, and sharing results. As an Esri technology user for more than 20 years, Knowles opted to use Site Scan because he believes Esri products work.

"We have been an Esri [technology] user for years across nearly the full software stack and a member of the Esri Partner Network for the last four years. This level of comfort with the software and the support of our Esri partner manager Ann Jachim and crucial Esri staff like Jeremiah Johnson drove us to stay focused on Esri products for this response solution," says Knowles.

He adds, "We can build up things [such as new maps and information products] quickly. We're functional in the environment. And the bottom line up front is it works." 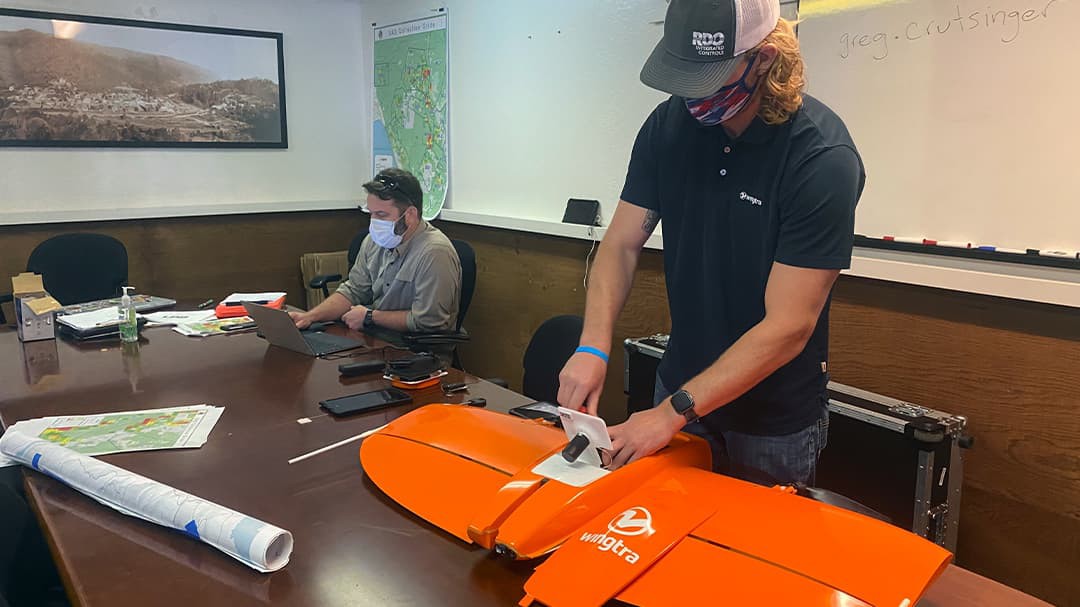 The team processing images from their Wingtra drone after a flight

The GeoAcuity team established a workflow for capturing data in the field using drones from Wingtra, an Esri Partner, and efficiently communicating it back to the office. For mission planning, the team gave all the drone pilots digital access to ArcGIS Online, a completely cloud-based GIS mapping software, to view the flight planning projects and data capture status via their smartphone or tablet and get instructions on exactly where to fly.

Then, the GeoAcuity team used Site Scan to ingest the captured imagery and integrate them directly into the postmission support, where they brought data in from the field and pushed it to the cloud. Site Scan allowed the group to process the orthoimagery and then publish it to ArcGIS Online, where dashboards and web apps had been created to monitor project status and visualize the resultant data. Knowles explains they were collecting imagery that was stitched into accurate 2D orthomosaics and also capturing 360-degree panorama views and aerial video. 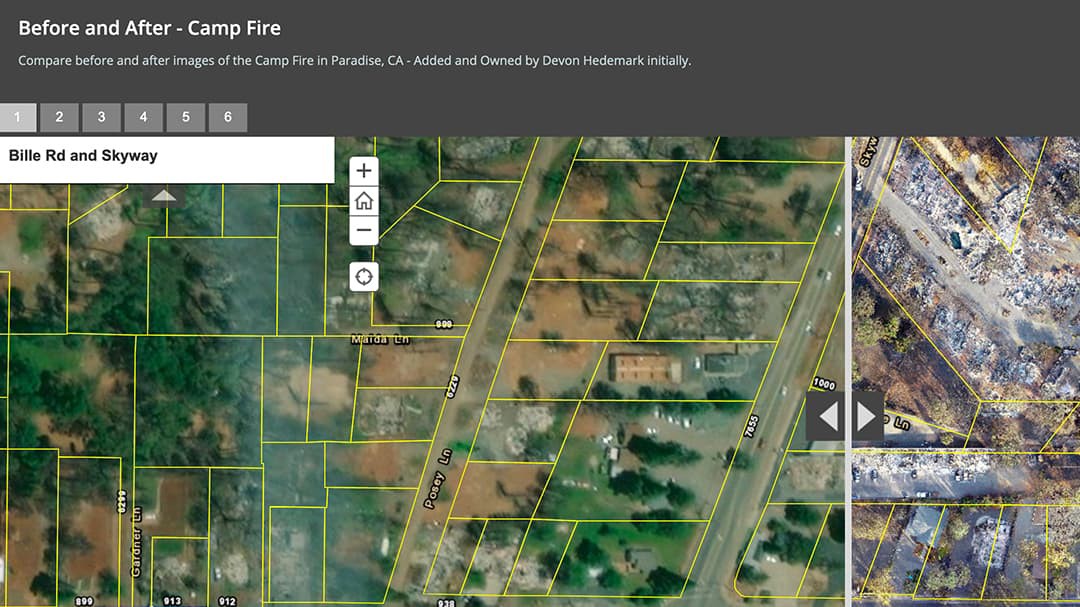 Since the deployment of Site Scan for ArcGIS, there have been positive benefits for civilians, emergency response teams and law enforcement, and other coordinating agencies. GeoAcuity has had more than 90,000 views of its web applications, and Knowles says the public resource (which is free) has an array of uses, including residents viewing their home online to assess possible damage.

"[The number of views] indicates to me a significant value add to the community and first responders. Residents can check on their houses when the fire areas are still closed off to the public," says Knowles. "We have seen [residents] use the data to help with insurance claims as well as to support GoFundMe pages using the pre- and postsite imagery."

With the imagery collected and processed using Site Scan, counties now have a historical record of high-resolution imagery that can be referenced over time. Also, multiple agencies and insurance companies can use it to work together to repopulate areas impacted by the fires.

"I've had insurance companies tell me they didn't need to send a team out [to review a site or claim] because the imagery was good enough," says Crutsinger.

The turnaround of drone-captured imagery has also improved with the use of Site Scan. According to Crutsinger, the GeoAcuity team is delivering completed image products in 24 to 48 hours after the drones take off, and the team is "processing hundreds of gigabytes a day and making it public the following day."

Knowles adds, "To be able to pull photos over into ArcGIS Online and just reference it to our maps was huge. That connectivity and interoperability saves massive amounts of time."

The GeoAcuity team has been able to deliver enhanced situational awareness to first responders. Knowles says 30 to 35 sheriff's officers across five counties were very impressed with the value that using the imagery and maps in a digital format brought to their organizations, and all groups were able to work from a common operating picture.

"The efficacy and timeliness of the imagery and how it helps both first responders and the public [ . . . ] enhance situational awareness when they physically cannot get to the disaster area. [The imagery] provides a record of the disaster [ . . . ] and helps decision-makers prioritize where to send help and focus rebuilding efforts [via damage density maps, etc.]," he explains.

Knowles adds, "We can show up on-site, throw up a UAS, and within an hour of the flight have images rapidly processed and into the hands of the people who need it most. The ability to have current and accurate geospatial information is key to assisting first responders."

The capability to deliver impactful imagery is another benefit of Site Scan, and GeoAcuity can incorporate other GIS data layers such as property boundaries and topography (gauging possible landslide risk) and any other GIS layers that help to make the imagery more powerful and deliver information in a standard format for counties and agencies to use.

"It's our job as the geospatial subject matter experts to make the end product as elegant and visually compelling [as possible] to tell the story of the disaster. That's what Esri's products were built for," Crutsinger says. "Stakeholders are always amazed at what is produced so quickly."

Site Scan has enabled the fast processing of imagery that allows the GeoAcuity team to rapidly put images into an easy-to-consume, interactive web map. Areas to be flown are predefined for pilots, which saves time, and mission planning can be conducted in the field.

"We can now preplan an area, divide up drone teams, send them out to capture the data, track all the SD cards [with raw images from the drone] as they come in, process all the imagery, integrate the layers into web maps, and then release those to the agencies and the public," says Crutsinger. "We can also do it in 24–72 hours from the first drone launching."

"It's a much more efficient, repeatable, and quantifiable methodology. Areas of interest are now defined in ArcGIS software and distributed across a range of digital media. We can pull layers into the mission planning, which shapes our entire strategy.," Knowles adds. "With the ability to leverage the geospatial expertise at GeoAcuity, we were able to completely transform and maximize the response effort."

Overall, Site Scan and the use of other Esri products like ArcGIS Dashboards and ArcGIS Web AppBuilder have given the GeoAcuity team a full end-to-end workflow that shapes strategy, planning, and operational logistics. Crutsinger says knowing that they have an integrated workflow, rather than using separate tools for things like mission planning and stitching, has helped streamline response efforts.

"The less time we spend doing debriefings and planning out the missions, the more time we have to collect data, and the more impactful the response will be," says Knowles. "[The work we do is tough with the] human impact and devastation, but it is rewarding because we see how the data we collect and deliver can help make a big difference." 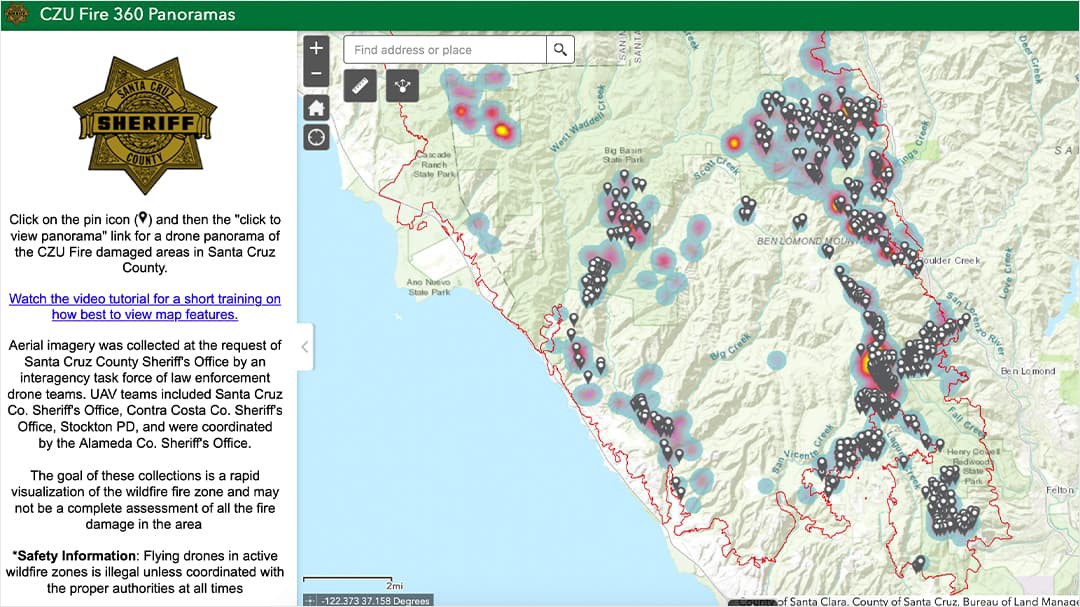 Our process is much more streamlined and efficient now. Mission planning and collection activities are faster, allowing the team to capture more imagery and important geospatial data than was previously possible.