From preventing plastic waste pollution in our oceans to keeping our recreational spaces clean and safe, improving waste management offers many environmental benefits and is one of the most significant ways to help preserve the planet. Federal and statewide regulations, guidelines, and initiatives actively encourage local agencies to begin the effort to reduce the amount of trash and pollutants entering the local environment and waterways. One example is the California "trash amendments," a series of mandates established in 2015 that require cities, large and small, to have a net-zero trash generation rate.

As difficult to achieve as this goal is, it is even harder to measure progress toward it. Under current regulations, local governments must actively monitor garbage accumulation in public areas to ensure that trash-reducing measures are effective.

The San Francisco Estuary Institute (SFEI) was brought in to validate the current trash monitoring methods in use by California cities and municipalities. SFEI, one of California's premier aquatic and ecosystem science institutes, comprises over 60 scientists, technologists, and designers who strive to improve environmental planning, management, and policy development.

Tony Hale, PhD, director of the Environmental Informatics Program at SFEI, says, "Our organization is designed to produce visionary science that can empower communities to be better stewards over their natural resources. We measure the quality of our work by the decisions that they help to inform."

To reduce financial costs to municipalities and improve efficiency in the field, the SFEI team set out to implement a new solution to cover survey areas and monitor trash. They used drones to gather imagery from the air and deployed cloud-based drone mapping software to streamline collection and analysis and share results with partnering agencies.

For cities, municipalities, and stormwater programs to have a net-zero trash generation rate, city governments and agencies must create ways to monitor trash to measure whether they are reaching their goals. However, every organization and jurisdiction was left to establish an assessment method for itself; according to Hale, it was difficult to determine whether the trash situation in local communities was improving or worsening, or how it compared to other communities.

The California Ocean Protection Council approached SFEI and the Southern California Coastal Water Research Project (SCCWRP) to partner and evaluate the different trash monitoring methods currently in use across the state and assess their levels of accuracy and precision. The results would help the groups develop a trash monitoring playbook to help understand what methods are best suited for monitoring and inform local decision-making.

Beyond merely monitoring current practices, SFEI and SCCWRP wanted to explore new methods and leverage new technology because methods previously considered had been inefficient or cost prohibitive, notes Hale. SFEI was specifically interested in using drones and machine learning in order to create a cost-effective approach to trash surveys. However, this approach was not without pitfalls.

For example, the traditional methods sometimes involved sending a five-person crew into the field and manually counting each piece of trash—this could take five hours or more, depending on the site. These methods were time-consuming and generated unnecessary costs. But technology implemented without proper planning could also result in significant expenses. For instance, manually flying a drone and then stitching imagery on a local computer to look for trash might offer useful results, but it could also incur outsized costs.

Pete Kauhanen, GIS manager at SFEI, says, "If you're getting your own drone and sensor, trying to integrate it yourself, and then getting your own mission planner and then the software to process the imagery, and then worrying about where to store all the different images and files . . . there are a lot of pain points and points where the system can break down. All that can really lead to higher costs and inefficiencies." 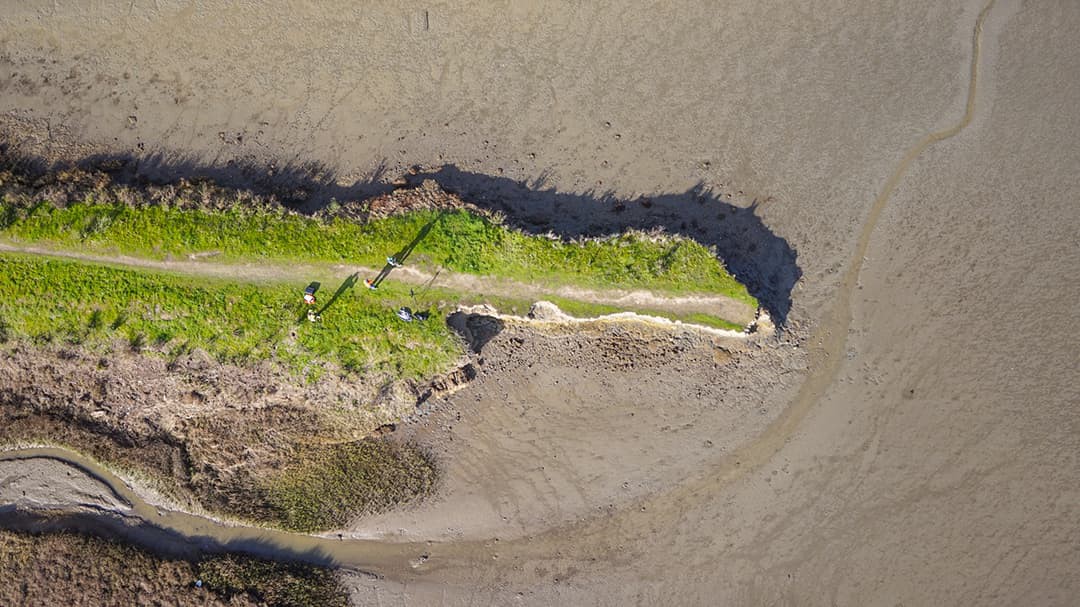 To leverage new technology, SFEI opted to use drones to fly over survey areas and capture high-quality imagery (survey areas included public rights-of-way in creeks and rivers and excluded private property). The team also set out to develop a machine-learning algorithm to automatically detect the trash in the drone-captured imagery. According to Hale, they wanted to concentrate on the actual products the drones would deliver (imagery, maps, data), rather than on the mechanics like planning and data storage.

"If it can all just be more or less automatic and handled by another service, then . . . we could concentrate our attention on what we thought was most critical, which is the maps that the drones generate, the imagery that we could derive from that, and the insights that we could get as far as identifying the trash in the imagery," says Hale.

The SFEI team chose Site Scan for ArcGIS to help them streamline UAS flights. Site Scan for ArcGIS is cloud-based drone mapping software designed to transform imagery collection, processing, and analysis. Kauhanen says that when he first began exploring Site Scan, he was trying to see how he could use the software for environmental issues—such as wetland ecology—that SFEI works on. He eventually realized Site Scan would be a great fit for the trash monitoring project because of its ability to manage drone assets and process imagery.

With Kauhanen being the only drone pilot at SFEI, he says the team wanted to keep the project lean and not have a lot of overhead to worry about.

"It made a lot of sense to allow Site Scan to handle all of the different pieces and parts and just get that done," says Hale. "And we would also have the support [from Esri]. When things did inevitably go wrong or there was some issue, we had someone to call on."

SFEI was able to create a website to share results that leverages the sampling SFEI did as well as ones done by the Bay Area Stormwater Management Agencies Association, a consortium of nine San Francisco Bay Area municipal stormwater programs; and the Stormwater Monitoring Coalition, which serves a similar collaborative purpose for Southern California public agencies. The public website offers a map showing all the different sites in the Bay Area where trash monitoring was conducted.

When a site is selected, the source of the data is shown along with the trash level (low or high), the sample date, and whether it was a targeted site (selected for its likely high trash load) or a probabilistic site (selected according to randomized sampling design). All data is downloadable. Users can easily explore the map, which features symbology that indicates the methods SFEI used. 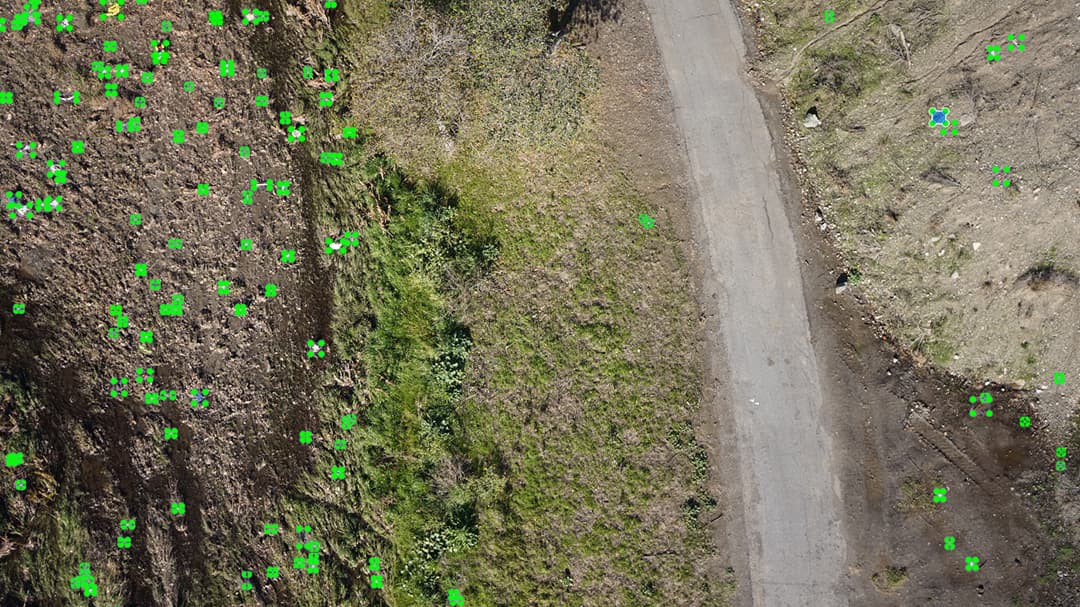 From more drone flights in the field to a more automated workflow, the use of Site Scan has enhanced processes for SFEI. Site Scan has enabled SFEI to complete more trips with drones and collect more imagery for the trash monitoring project. Kauhanen explains that it only takes 10–15 minutes to complete a flight, with just one or two people—this would enable municipalities to conduct their own sampling and monitoring projects in the future.

"This approach using Site Scan allows us to go and monitor many more places and to go out much more frequently so [we] can get a much better synoptic view of what's happening in an environment," says Kauhanen. "Versus just looking at a creek twice in a season, now you could potentially go out 10, 15 times . . . to one site."

According to Hale, Site Scan allows SFEI to cover a broader geographic range and capture the total view of a survey area. Currently, cities monitor trash by going out to a handful of sites, at most, twice a year, which makes it difficult to get an accurate assessment of how much garbage is being generated by the city.

Hale adds that capturing trash in certain locations "is completely impractical if you were to do this manually. So it's almost [comparing] apples and oranges. Not only is it now more efficient, meaning it takes less time, but you're also able to potentially cover a much broader geography than you could otherwise."

Site Scan has given SFEI the ability to develop a more automated workflow with an integrated solution. Kauhanen says Site Scan was a great option because the software integrates information about the vehicle and sensor into mission planning, imagery processing, and data storage, simplifying operations in the field and building an efficient system for data management.

"We're definitely benefiting . . .  from being able to do volumetric calculations on the fly or being able to now add markers for pieces of trash and being able to export that. Those are all features that are really helpful [to have] in one place. We're not having to have 5 or 10 different pieces of software to do the work we're trying to do," says Kauhanen.

He adds, "It's great that I can go out, basically draw the polygon on the iPad, and hit Go. It already lays out the flight plan for [the drone] and . . . then I can just hit [a button to] upload to the server. The whole process is automated in a way . . . where I know it all works together."

Kauhanen also likes how easy it is to share results with other agencies. With just a hyperlink to a map or summary report, others can view the most current data.

"Just sharing a link is really useful versus having to download the imagery and then try and send it as an attachment, which wouldn't work because it's too big of a file size," says Kauhanen. "So it saves us a lot of time and headache in terms of being able to use drones as a solution for any of these projects."

After presenting the results of the trash monitoring project with Site Scan, groups like the Northern California Recyclers Association have shown interest in the software. Hale says people are interested in the ways it can be used for an array of purposes.

"We're doing more with less. We're able to have fewer people involved, but [we] are being just as effective as if you had someone who programmed it themselves," says Hale. "We are excited about what we can do in the future."

Site Scan allows us to operate a drone program cheaply and effectively, without having to have all the overhead of inventing the workflow ourselves. We've been able to effectively and efficiently get the imagery we need.