Using GIS to enhance the way government works is what drives the City and County of Honolulu's (Hawaii) GIS administrator Ken Schmidt. "Improving the efficiency of government operations makes people's lives better in many different ways and helps us protect the citizens in our communities," he says.

Beyond the direct impact on the lives of Honolulu's residents, he believes GIS also plays an important role in protecting the island environment. "We're protecting what makes Hawaii unique-the aesthetics of Honolulu-by having better information to make better decisions about issues such as development patterns, water resources, or how the sewer system operates. We're using GIS to create livable and sustainable communities." 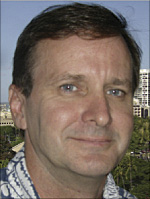 "There's no doubt that the success of the City and County of Honolulu's GIS program is due to Ken's vision, strong leadership, and single-minded determination," says Arthur Buto, GIS coordinator for the State of Hawaii Department of Land and Natural Resources and president of the Hawaii Geographic Information Coordinating Council (HIGICC). "Through at least five mayors and acting mayors, he guided the growth of the program from its infancy to the nationally recognized program it is today. He and his team demonstrated the value of geospatial data not only to their bosses but to state leaders and to the general public with the introduction of online mapping and permitting systems, building on early successes with parcel and infrastructure data."

Schmidt began his career with a company in Florida, mapping wetlands in the northern United States and Canadian provinces for the U.S. Fish and Wildlife Service in association with Ducks Unlimited. Soon, a position opened up at the Suwannee River (Florida) Water Management District for a GIS analyst. "It was the early '80s, and I wasn't quite sure what that job was at the time," jokes Schmidt.

Graduating from Southwest Texas State University (now Texas State University) with a geography degree a few years earlier, Schmidt didn't know what he was going to do with his degree, but the emerging field of geographic information system technology would end up playing a key role. "GIS was becoming a profession, and I happened to get in at the right time," he says.

At the Suwannee River Water Management District, Schmidt began using ArcInfo to map drainage basins, land use, and watershed protection. "It was inspiring, but the potential of the technology we were using was still an unknown," he says. "Yet I knew GIS was going to provide a very useful tool to policy makers, especially at that point for those involved in managing the water resources in the area."

Soon, the Southwest Florida Water Management District asked him to migrate its legacy mapping operations into ArcInfo. Five years later, with that task complete, he accepted a job as the GIS coordinator for the City and County of Honolulu.

Beyond the work that he does for Honolulu, Schmidt is dedicated to educating people about geography and GIS. In addition to the GIS Day events his department hosted for many years, which spawned GIS education programs in local schools, he has been involved in the National Geographic Bee for some time. The contest tests the geographic knowledge of fourth through eighth graders. "It's been an honor to participate in that, either as a moderator or judge," he says. "It's really rewarding to see these kids learning about geography."

Schmidt also helped start a GIS user group on the island in the early 1990s. "He lives and breathes GIS," says Henry Wolter, U.S. Geological Survey geospatial liaison, Hawaii and Pacific Basin Islands. "Even during our biweekly tennis matches, he's talking about whether the ball landed in the right polygon, or a project he's working on for the county."

The user groups he helped create have evolved into various other user groups and GIS conferences in the region. He was also a founding member of HIGICC, which promotes communication, data sharing, interagency coordination among GIS professionals, and education of the public and policy makers about the benefits of GIS. HIGICC has also assumed the primary role in hosting GIS Day on Oahu.

"During his two terms as president, Ken helped lead HIGICC through a number of trying times," says Wolter. "He was fiscally conservative, looked at our needs, and determined what would work. He always reminded us that we needed to share our data and get it out to our partners and clients in the GIS community who need it."

"Hawaiian values have a very strong sense of community and its connection with the land and water that sustains them," he says. "We embraced those values in our program with the motto 'Palapala aina o ka mokupuni o Oahu,' which translates to 'describing the land of the Island of Oahu,' or simply 'mapping our island.'"