Esri T-shirts Around the World 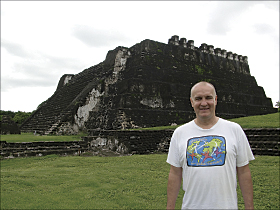 Alfie Blanch, GISP, GIS & Mapping Section supervisor, Los Angeles County, California, Fire Department, posed at a pyramid in Zempoala, Veracruz State, Mexico, the capital of the Totonac civilization at the time of the Spanish conquest. The area's history is traced from that time (1519 AD) through the Classic Veracruz culture (600–900 AD) all the way back to the Olmec culture (1500 BC). The descendants of the Totonacs still live in this region. 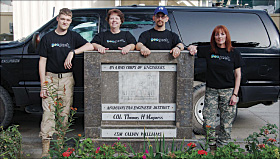 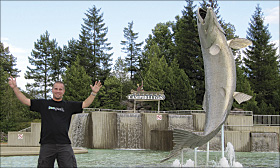 David Schmidt, GIS analyst, Government of Canada in Guelph, Ontario, had this picture snapped in the northern part of the province of New Brunswick on the east coast of Canada. The salmon is quite a tourist attraction in these parts. So is his T-shirt! 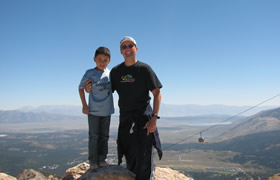 Nick Franchino, AICP, GIS manager, Department of Regional Planning, Los Angeles County, California, visited Gull Lake and the Town of Mammoth Lakes in eastern California. He tells us, "My wife got a decent picture of us in our Esri shirts." Beyond the nice T-shirts is a really nice view!

Travelling to a unique location?

Wear your Esri T-shirt, snap a photo, and send it to us. Your face and place may show up in ArcNews!


Send Us Your Photo