A Digital Transformation for Parks

Three Rivers Park District in suburban Hennepin County, west of Minneapolis, Minnesota, operates more than 30 parks, 150 miles of regional trails, and recreational facilities in an area the size of Rhode Island. It is no small feat maintaining 28,000 acres of land, providing education to the public, and taking care of natural resources for 11 million visitors each year.

The park district, with 500 full-time employees and 1,500 seasonal workers, runs a robust GIS, complete with both ArcGIS Enterprise and ArcGIS Online. With 180 active users participating in an extensive range of GIS projects, this approach truly allows Three Rivers to live up to its mission of “enhancing the quality of life through recreation and education.” But this wasn’t always the case.

More than 10 years ago, GIS use at Three Rivers consisted of a dozen non-GIS employees across the district using various GIS products on their own, accessing siloed folders of data and performing individualized workflows. Because these methods lacked the efficiency needed to scale and modernize, the park district recognized the need for a centralized GIS program to replace that approach.

Over the years, the GIS department has done just that, transitioning from making static maps to creating solutions that provide value for every park district department, from maintenance to public safety. The park district’s GIS team also supports a vibrant volunteer base that helps with various activities, including field data collection. The team even uses GIS products for onboarding new employees and volunteers.

“Our biggest goal is to make GIS as prominent a tool as Microsoft Office for the average person,” said Chris Martin, technology director of Three Rivers Park District. “If we can do that, we’ve really succeeded.”

Raising the Profile of GIS

The turning point for Three Rivers Park District came, according to Martin, when departments started wanting what the GIS team could provide without the GIS team having to sell it to them.

“In the early days, we decided we were not going to kick somebody’s door down and say, ‘Hey it’s the GIS guys, this is how we’re going to save you!’” said Martin.

Instead, the team quietly sought out departments whose processes could be improved by GIS and started building them solutions using ArcGIS technology. When these departments were out in the field using GIS, other teams would find out what they were doing.

“When others see that and say, ‘You can do that? Let’s call Simon!’ we got to a point [where] we didn’t have to sell anything,” recalled Martin. “They came to us.”

The Simon that Martin referenced is Simon Morgan, now the senior manager of GIS and business applications, who joined the district 11 years ago. As the GIS team demonstrated its value over time, more and more Three Rivers Park District employees—from the public safety and maintenance departments to natural resources, the outdoor recreation school, and information technology—reached out for help. 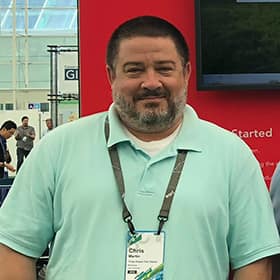 Our biggest goal is to make GIS as prominent a tool as Microsoft Office for the average person. If we can do that, we’ve really succeeded.

Morgan recalled that one of the initial departments to benefit from GIS was the maintenance group, responsible for putting buoys on the lake. Before, buoys—used to mark swimming areas so boats stay away and swimmers stay safe—were placed using rudimentary measurements that weren’t cross-referenced on a map.

“It used to take them two to four days because they [would] have to put the buoys out, go back to shore to check [for accuracy], then go back out to adjust as necessary,” said Morgan. “Now we have the buoys where they should be located on a map, and it takes the team less than four hours.”

Examples like this raised the profile of GIS and grew the concept of using GIS as a service within the park district.

The GIS department’s first step to modernizing its system was to tackle its myriad datasets, moving from a disjointed system that contained thousands of datasets spread across folders to an organized, centralized enterprise geodatabase. The second step, implemented concurrently, was to migrate the district’s mature, on-premises stand-alone server to the full stack of ArcGIS Enterprise. An added benefit of doing so was having the ability to leverage apps, such as Collector for ArcGIS for field data collection, across the organization.

A major focus of the GIS department—which, at that time, had only two team members—was to ensure that the solution could scale to serve its many users without having to scale the department itself. Data sharing and access were challenges, especially with teams in the field.

“Because users wanted to use the data in Collector, we would add the data to ArcGIS Online, manually registering the services from ArcGIS Server and making it available to them,” said Morgan. “It was a lot of legwork.”

But ArcGIS Enterprise and ArcGIS Online both have functionality to address the issue: distributed collaboration. This allowed Three Rivers Park District to provide users with the right data at the right time.

Now, the park district maintains data in ArcGIS Enterprise using enterprise geodatabases that automatically synchronize with feature layers in ArcGIS Online. The seven different groups of data collectors can then easily access the data layers for more than 20 parks. Each of the district’s 10 data owners is responsible for assigning permissions and authorizing changes within their own enterprise geodatabase.

The team chose to use ArcGIS Online as the access point for end users because Morgan wanted to build a strategy off a system that users were familiar with.

To kick off the park district’s collection season this spring, the solution was deployed for a few groups, including wildlife and forestry.

One key project that has really benefited from Three Rivers Park District’s digital transformation is its osprey and bluebirds research, part of the wildlife management program.

The wildlife management crew relies on volunteers to report on the birds’ nesting activities. Collecting and logging observations was a key challenge for the program. So the switch from manual to digitized data collection has been pivotal.

“People used to email observations, call in their observations, or drop off pieces of paper at the front desk,” recalled Morgan. “It took someone several days, even weeks, to collect all the information in a way that could be interpreted to see the health of the osprey nest.”

To improve this workflow, the GIS department used Web AppBuilder for ArcGIS to create a web app that volunteers can use to record their field observations. Meanwhile, Three Rivers Park District staff monitor these reporting activities in real time using Operations Dashboard for ArcGIS.

Now, instead of scribbling down notes, volunteers—who receive minimal training—can submit their observations using a smart form that guides them, in a scientific way, through the information the park district needs. It’s then easy for the program manager to pull the data and get a real-time idea of the health of the osprey and bluebird nests, along with the number of hatchlings being produced.

“We’ve designed it so well that they don’t even realize how much has changed, except now they have the ability to make the changes in the field when they want to,” Morgan said. “Probably the best compliment I can give is that we haven’t noticed [the collaboration capability] since we turned it on, meaning it just works. It made it so much easier to deploy [ArcGIS] Enterprise but keep ArcGIS Online.”

For instance, when long-term employees of the park district retire, GIS has become the way to preserve institutional knowledge.

“The biggest way GIS has helped the park district is getting data and information out of the heads of people and into areas [where] anyone can access it,” said Morgan.

Story maps are central to this endeavor. For example, the outdoor recreational school uses an Esri Story Maps app to train seasonal staff who work for up to six months at a time. Information, such as where locks are kept or where to set up climbing towers, is put into a story map so new staff who are unfamiliar with the parks can be onboarded in an efficient and interactive way.

“We need maps, we need data…to be able to get them to where we need them quickly and efficiently, without having them spend weeks getting to know the park before we can even train them,” said Morgan.

Asset management has also been revolutionized in the forestry department, where inventory used to be paper based. Before, plant crews tracked plant materials—from seed to seedling to ready-to-plant tree—by hand. They gave paper notes to an office assistant, who typed the data into a system. No matter how hard the office assistant worked, the sheer volume of data she dealt with meant that she was always three months behind.

“We are now at the point where expectations are so high that we actually get complaints if the inventory system is out of date by 15 minutes,” said Morgan. “GIS has significantly improved [data] accuracy and [the] speed [at] which data is updated.”

The digital transformation at Three Rivers Park District has only just begun. Next up, the department plans to implement 3D GIS and the forthcoming ArcGIS Indoors mapping system.

“GIS has always been about visualization. 3D takes that to the next level and will help us better understand how our parks work,” said Morgan, who expects to utilize 3D for the park district’s ski areas.

As for ArcGIS Indoors, Morgan sees it as the natural evolution of GIS to turn indoors, where asset management is drilled down to the building footprint level. Knowing exactly where everything is inside a facility will enhance that experience.