Being bold, seizing opportunities, building a community, and elevating women were some of the key messages of the WeCan Empower Your Voice panel, held July 11, at the 2018 Esri User Conference (Esri UC).

The panel was put on by the Women’s Empowerment and Career Advancement Network (WeCan). An internal, grassroots organization at Esri, WeCan seeks to give women resources that they can use to make headway in their careers. WeCan invited four extraordinary women—Dr. Paulette Brown-Hinds, Dr. Karen Kemp, Alison Rose, and Lilian Coral—to participate in the well-attended panel discussion.

“Figure out what’s important to you,” urged Brown-Hinds, founding partner of Voice Media Ventures, a multimedia company that emphasizes community engagement and outreach throughout California. “That’s the kind of life you want to build.” 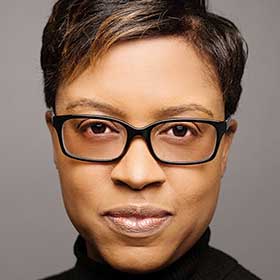 “Figure out what’s important to you, that’s the kind of life you want to build.”

“[Take] the opportunities that are handed to you—sometimes not knowing at all that they’re important,” advised Kemp, professor of the practice of spatial sciences at the University of Southern California’s (USC) Spatial Sciences Institute. “[Take] the opportunities that are handed to you—sometimes not knowing at all that they’re important.”

“Raise [your voice] in an effectual way,” stressed Rose, who recently became Esri’s global national government marketing director after spending the majority of her career in the Australian Department of Defence. 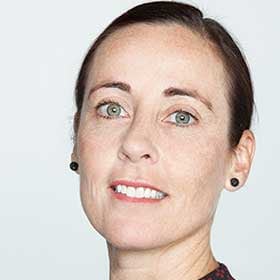 “Raise [your voice] in an effectual way.”

“You have to have courage and just step into it,” said Coral, who, after an effective stint as the chief data officer for the City of Los Angeles, is now the director of national strategy and technology innovation at the John S. and James L. Knight Foundation. “Make moves. It forces you to be comfortable with change and adaptation.” 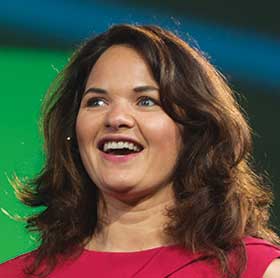 “You have to have courage and just step into it.”

Although women have certainly made progress in the workplace over the last few decades, there are still important disparities to overcome. In the United States, women accounted for almost 60 percent of bachelor’s and master’s degrees and 52 percent of doctoral degrees earned in 2014–2015, according to the National Center for Education Statistics. Yet they make up only 26 percent of senior-level managers and executives—and just 5 percent of CEOs—at S&P 500 companies, reports the nonprofit Catalyst.

In the US tech industry, they fare even worse, consisting of only 20 percent of executives, senior officers, and managers, according to the US Equal Employment Opportunity Commission. And in 2016, 43 percent of the top tech companies in Silicon Valley still lacked female executive officers, reports Fenwick & West LLP, a technology and life sciences law firm.

To women working in these industries, those aren’t just statistics. They have real and lasting effects on how women do their jobs and how far women can get in their careers. That is why this past November, a group of women at Esri founded WeCan. Meetings every other week vary in content from tutorials on how to write more authoritative emails to hearing Esri’s female leaders speak about their professional experiences. The group has attracted about 280 participants in nine short months.

To solidify its place in the Esri ecosystem, the organization partnered with Esri’s Young Professionals Network (YPN) to put on the WeCan panel at this year’s user conference. “At Esri, nothing’s really official until it happens at the user conference,” observed Julia Lenhardt, imagery product engineer and WeCan admin.

“We have this platform—this group, this network, these resources, the infrastructure—to put on a really meaningful event for women not only at Esri but at the user conference as well,” said Margot Manasevit, an account manager on Esri’s global business development team and one of the leaders of WeCan. “There are amazing women in attendance, so we want to showcase the great resources that we have here for women.”

“For me, being young and new to the professional world, it’s just great to see women in higher positions in tech, or just in general, talking about women and diversity,” said Josie Imrie, a recent graduate of the University of Oregon who interned at Esri and is now job searching. “It gives me people to look up to and [shows me] that there are so many different paths you can take with GIS.”

“Being able to see the four women discuss their experiences felt empowering because they all come from such diverse backgrounds,” said Christina Boggs-Chavira, an engineering geologist who cofounded Women in GIS. “It really let each person who attended the panel get something different out of it.”

Some attendees also enjoyed the camaraderie they found with other women—a sentiment echoed by the WeCan organizers.

“I work with a lot of men, and everyone is super great and supportive, but it’s really difficult for me to find other women in the company to be friends with and get career inspiration from,” said Jillian Foster, a product engineer on the ArcGIS Pro graphics team who also manages the WeCan listserve. “I hope that attendees were able to see themselves in the women who were up there and are inspired to continue pursuing their dreams.”

This appeared to be the case, with attendees reflecting afterward how motivated they felt to take chances and chart their own careers the way all four panelists have.

“My first plan was to be an academic,” said Brown-Hinds, thinking she wanted to focus on scholarly writing, which garners a relatively small audience. But then she took over her family’s newspaper, Black Voice News, and found herself putting out powerful editorials that gave a voice to people who don’t have one.

“I wrote a piece, and within 10 minutes of sending it out, our chief of police called me. He had just read it, and he had concerns about it,” she recalled. “That was the moment I really realized how powerful my voice was.”

Not only did Brown-Hinds’s writing begin to effect change in the community, but it also led people to become much more interested in her as a civic leader. Now, she sits on the board of The James Irvine Foundation, which provided more than $90 million in grants in 2017 to individuals and organizations throughout California.

“I’m able to make an impact in a way that I never imagined when I was writing for our little newspaper there in Riverside, California,” she said.

Kemp mapped out a career of her own liking within academia. She was 34 when she entered the PhD program in geography at the University of California, Santa Barbara, and was told she’d have to toil for years as an assistant professor and then an associate professor before becoming a full professor. But that wasn’t the kind of lifestyle she wanted. Instead, she took on directorial roles at various universities before being lured to the University of Redlands as an associate professor to create and lead the master’s in GIS program. After several successful but intense years, she left for a simpler life in Hawaii. USC soon hired her as a lecturer (the lowest rank, usually reserved for new professors). Within a couple years, she was a full professor again.

“You don’t have to do what the world says is the path,” she told the audience.

This is something Rose understands, having moved from the world of geospatial intelligence to private sector GIS. In her new role, she hopes to hone a legacy that inspires and motivates others to love their jobs as much as she does, as well as cultivate a supported and happy family.

“That is ultimately my priority,” she said.

But nobody can attain their career goals unaided—especially women who still have such high hurdles to clear.

“I’ve always had this sense that you don’t just succeed because you’re brilliant,” concluded Coral. “You really do rely on a network of people.”

Attendees of the WeCan panel were excited about this emerging Esri community and expressed interest in sustaining these types of official gatherings. WeCan is aiming to be that network of people for women at Esri, while also continuing to engage with women in the larger GIS community. “If we can use our platform to empower other women outside Esri, we want to do everything we can to do that,” said Manasevit.

Other meetings and activities geared toward women have been held at previous Esri User Conferences. These events were led primarily by a group called Women in GIS, which held a special interest group meeting and a social this year. Both groups supported all three events.

This year marked the first time that a women-specific event came directly from Esri. This is important, said the WeCan organizers, not only because Esri is a leader in the GIS industry but also because it’s something that potential hires are seeking.

“We go to women-specific events for recruiting, and a lot of young women have started asking what resources Esri has available for women,” explained Lenhardt. “Two years ago, I couldn’t really say anything. But now, we have something that’s organized and that people here care deeply about. And it’s not going anywhere.”

[Since the Esri UC, WeCan launched the Women’s Geospatial Forum, a GeoNet group for women across all geospatial sectors to find information and resources, ask technical or professional questions, and engage in discussions with women and allies in the GIS industry.]

An Open Data Strategy Pays Off for Johns Creek