“We have higher-resolution maps of the entire surface of the Moon, Venus, and Mars than we do of our own planet,” said Esri chief scientist Dawn Wright. Other earth scientists have also noted this deficiency.

The Seabed 2030 project, sponsored by The Nippon Foundation and General Bathymetric Chart of the Oceans (GEBCO), plans to improve that situation by mapping the entire ocean floor by 2030. [See the accompanying article in this issue, “ Joining Together to Map the World’s Seafloor,” to learn more about GEBCO.]

Announced in 2018, the project’s goal is to build the technical, scientific, and management framework necessary to develop and compile high-resolution bathymetric information of the entire ocean floor into a seamless digital map.

The traditional methods for terrestrial and extraterrestrial mapping use electromagnetic waves, such as radar and light, which are not effective in ocean water that is more than a few meters deep. While the ocean surface height measured by satellites provides a very general view of the ocean floor, it does not always provide measurements that are sufficiently accurate to be of significant value for scientific research of the ocean or other types of deep ocean activities. However, the Seabed 2030 project will use modern acoustic mapping technologies deployed on various platforms and bring together all available bathymetric data to produce the definitive map of the world ocean floor by 2030. This map will be made available to all.

Mapping the shape of the seafloor will help in better understanding ocean circulation patterns in relation to the complex links in the ocean atmosphere system, which is responsible for the weather and climate on Earth. Bathymetric measurements from the deep ocean are valuable in both marine geology and geophysics to help scientists better understand the dynamic processes that are continually reshaping the seabed. In addition, bathymetric measurements are used for applications that include cable routing, fisheries management, and natural resource exploration and exploitation, as well as providing a critical dataset for dealing with the challenges of climate change.

Although ultimately the goal is to record 100-meter (328-foot)-resolution data throughout the entire 362 million square kilometers (140 million square miles) of ocean floor, measurements will be made at varying resolutions, depending on the water depth. The threshold for deep ocean is 200 meters (645 feet). While the average depth of the ocean is 3,688 meters (12,100 feet), depth at any point can vary greatly. A depth of 11,033 meters (36,198 feet) has been recorded in the Mariana Trench located in the western Pacific Ocean.

Due to the limited time frame and scope of the project, innovative data-gathering strategies will be enlisted for bathy-metric data collection. The International Hydrographic Organization (IHO) created the IHO Crowdsourced Bathymetry Initiative, which encourages the collection of worldwide bathymetry data by commercial fishing and cargo vessels, cruise ships, and recreational boats equipped with standard echo sounders. Depending on the precision of the equipment used and the amount of accumulated data, it can be quite accurate. However, even though some crowdsourced data may not entirely meet the accuracy requirements of the Seabed 2030 initiative, the data can be used to help identify uncharted features and verify the accuracy of previously charted areas.

For example, the Olex company in Norway has been collecting commercial fishing data using single-beam technology for more than 30 years. A study has determined that there was a water depth difference of less than 1 percent between the measurements made by Olex and those collected using multibeam technology.

It’s also hoped that national governments, oil companies, survey companies, oceanography institutions, nongovernmental organizations (NGOs), mining, and other industries that maintain bathymetric data can be induced to contribute lower- resolution versions of their datasets to the project. Providing lower-resolution data would allow them to protect their vested interests while contributing to the common good and the universal value of the project.

The Seabed 2030 project also may benefit from an international contest to accelerate innovation in the development of the means for conducting unmanned exploration of the deep sea.

The Shell Ocean Discovery XPRIZE competition has the potential to reduce the time and cost of ocean floor mapping, which would assist in data collection for Seabed 2030.

The XPRIZE Foundation was created 25 years ago. Its sponsors have awarded more than $140,000,000 to advance technological solutions that benefit humanity in areas such as space, oceans, learning, health, energy, environment, transportation, safety, and robotics.

The Shell Ocean Discovery XPRIZE competition began in 2015. Competing teams launch—by either air or sea—an autonomous underwater vehicle that they use to explore the ocean depths. The prize money offered to the winning teams: $7 million.

The semifinal challenge, held in 2017, tested the remaining 19 teams on 11 criteria to demonstrate that their technical solutions could meet the operational requirements necessary for rapid, unmanned, and high-resolution ocean mapping in 2,000 meters (6,561.7 feet) of water.

The final round, pared down to eight teams, was held in late 2018 off Kalamata, Greece, near the Hellenic Trench in the deepest part of the Mediterranean Sea. The specified area was less than 4,000 meters (13,123.4 feet) in depth and mea-sured 500 square kilometers (193.1 square miles). Teams were required to map at least 250 square kilometers (96.5 square miles) of this area during a 24-hour period.

And the Winner Is…

“We are an international group of PCOB alumni and advisers from diverse backgrounds and disciplines including engineers, oceanographers, geomorphologists, geologists, and GIS specialists,” said Wigley. “This synergy allowed us to approach the project from a unique perspective, which has led to our success and the top prize.”

“From the beginning, the team’s goal was to integrate—as much as possible—existing technology (equipment and software) because a lot of the technology needed to map the ocean floor exists but not as an integrated solution in the way we needed it to work,” said Wigley. “There were a couple of significant gaps to make the necessary solution—one was the uncrewed surface vehicle, and the other was the creation of an automated data workflow.”

Because of recent advances in robotics and sonar technology, the team developed its entry based on a deep-diving, autonomous underwater vehicle (AUV) equipped with bathymetric sonar systems to acquire high-resolution seabed data.

“At this time, only about 8 percent of the seafloor has been mapped with modern multibeam technology, and as a result, we know very, very little about it,” said Bazhenova. “Because of the size of the ocean, we needed to implement a system that included as much autonomous data-gathering technology with limited human interaction as possible. If equipment can be strategically dropped off in the ocean and perform the surveying work—data transfer and its own maintenance with minimal interaction—the high cost of deep ocean surveying can be significantly reduced. This will increase the potential to successfully map the entire ocean floor at a scale that will allow us to better understand the dynamics of our planet so that we may become better custodians of it.”

The team employed SEA-KIT, an uncrewed surface vehicle (USV) built by British company Hushcraft Ltd, which acted as the mother ship and operational control hub for the Norwegian Kongsberg Maritime company’s HUGIN AUV. Under the direction of the bathymetric scientists and technicians at the team’s land-based operations center, the USV is guided either autonomously or by remote control to its mapping location, carrying the torpedo-shaped AUV. Upon reaching the area to be mapped, the AUV is deployed and retrieved by an automated conveyor system on the USV. The USV also tracks the movements of the AUV during its autonomous operations. The AUV can operate to a depth of 4,500 meters (19,685 feet) at 4 knots (4.6 mph) for 2–36 hours, depending on the sensing equipment being used.

“Some of the side-scan data was post-processed down to two centimeters 0.8 inches),” said Kearns, but he noted that level of detail does impact battery life. The USV can be deployed at sea for approximately seven months, while the batteries on the AUV must be recharged daily.

During the tests, the batteries were recharged when the vessels returned to land from their mission. However, in the future, the USV may recharge the AUV at sea when the AUV resurfaces to download the data it has collected. To fully utilize the equipment, while one AUV is surveying the ocean floor, the other AUV could be charging its batteries at the USV.

Although the equipment used by the GEBCO-NF Alumni team can analyze the water column in which the AUV is passing for chemical signatures, temperature, salinity, and oxygen, the team did not focus on these capabilities because they were outside the scope of the XPRIZE concept and the amount of data collected would be huge.

“The datasets the team was working with was quite large,” said Dorshow. It took the team about two hours to download approximately 80 gigabytes of data and another four hours to preprocess it using customized software the team developed for the workflow.

The sensors onboard the AUV collect a variety of datasets in different formats that were then processed over 36 hours using in-house Kongsberg software as well as proprietary software developed by Teledyne CARIS and Qimera. ArcGIS was used to ingest the data and then ArcGIS Enterprise was used for on-the-fly processing and mosaicking. After creating image services from the mosaic datasets, the team could make data available through ArcGIS Online as bathymetric maps and images.

“Our Esri stack of software is used as the middleware to get this deep scientific data into a web browser so that decision-makers can start using it without any knowledge of how to process bathymetric data,” said Dorshow. “One of the advantages of getting the data into the GIS is that often the raw data is much, much larger than the derived products created from it. So we don’t have that 80 gigabytes of data stored on the server because we processed it into optimized GeoTIFFs.”

“By integrating and augmenting existing technologies and services with our own development work and that of our partners, we have created an autonomous, deep sea mapping system that is faster, less expensive, and safer than using traditional vessels with crews for operational procedures, while acquiring higher-resolution data,” concluded Wigley. “And, none of this would have happened without the XPRIZE. It brought us together in a cutting-edge competition and allowed us to push the boundaries of the technology.” 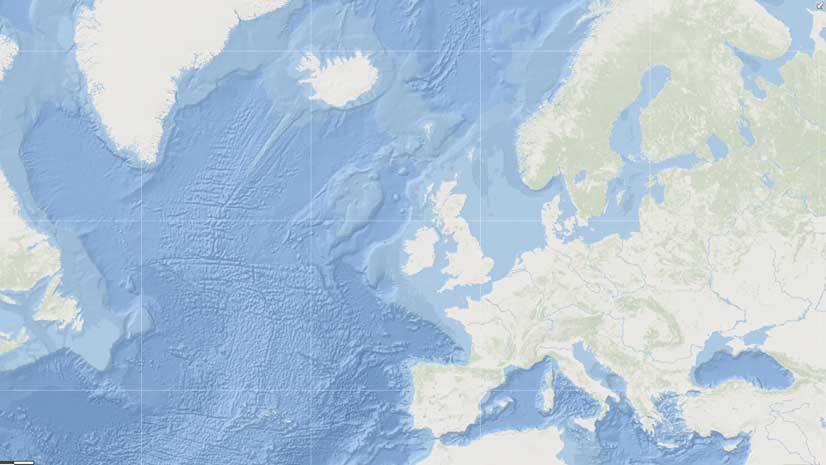 The General Bathymetric Chart of the Oceans (GEBCO) commission dedicated to creating the most authoritative bathymetry of the world’s oceans.