Have you ever wondered what are satellites used for?  Who owns them?  Where do they orbit the Earth?  Let’s try to answer these questions using SatelliteXplorer, an application we built to visualize the active satellites that are orbiting the Earth.  If you are curious about how we built it, there is also a small section about that at the end of this blog.  For now, let’s dive right into those questions!

Why do we use satellites? One main reason is navigation.  We use global positioning system (GPS) satellites every time we get our current location or driving directions on our phone.  Besides the personal use, GPS can be found in almost any industry sector. Where exactly are these satellites across the sky? In the image below we can see all the orbits of satellites used for localization.

Orbiting at 20,000 kilometers (12,000 miles) and higher, satellites have direct coverage of large parts of the Earth at once. These satellites are part of the medium earth orbit (MEO), so they are quite high, but there are orbits that go even higher! Just to give you an idea, when we fly in a plane, we fly as high as 14 kilometers (8.5 miles) above Earth.

Another important use of satellites is earth observation. For example, taking regular satellite images of the Earth is useful for environmental monitoring, agriculture, fishing, urban planning and meteorology, just to name a few applications. The weather predictions that we check every day couldn’t be made without information from earth observation satellites.

One of the more famous programs for earth observation satellites is Landsat. It is a joint program between NASA and USGS and it has continuously acquired images of the planet’s surface since 1972, making it the longest continuous space-based record of earth’s land in existence.  The Landsat program currently has three operational satellites that collect data: Landsat 7, 8 and 9.

Most of the operational satellites currently orbiting the Earth are used for communication purposes like broadcasting television and radio signals, as well as providing internet service. In recent years, launching communication satellites in the lower earth orbit has become a thriving business. Communications providers, SpaceX and OneWeb are the two companies with the largest number of satellites with a goal to provide fast internet for everyone.

Approximately 75 countries have at least one operational satellite in space. However, most of the satellites orbiting earth are owned by companies and organizations in the USA.

Now, let’s look into the altitude at which satellites orbit the Earth. Most satellites are in the low earth orbit (LEO) of 2,000 kilometers (1,250 miles) about the surface. Some satellites can orbit as low as 160 kilometers, but the majority of them are higher up.

Why is LEO such a popular region for satellites? First, it’s quicker and cheaper to launch satellites in LEO. For imagery satellites, it’s important that they are close to Earth so that they can take high-resolution images. For internet providers, being close to Earth allows for faster upload and download speeds and lower latency. However, communication satellites in LEO can only work as part of large constellations, creating a net around Earth to be able to cover all of its surface at any point in time. The International Space Station is also in LEO, making it easier for astronauts to travel to and from the facility at a shorter distance.

Medium earth orbit (MEO) is a very large region, but with far fewer satellites. The global positioning satellites we looked at in the beginning of this post typically orbit in this region.

Geostationary orbit (GEO) is very popular and, because it is such a small region, it is also very crowded. Satellites in this orbit circle Earth above the equator from west to east, following Earth’s rotation. This makes them appear stationary over a fixed position. GEO is used by satellites that need to stay constantly above one particular place over Earth, such as telecommunication satellites. This way, an antenna on Earth can be fixed to always stay pointed towards that satellite without moving.

From helping us navigate to a location to providing the signals for our nightly news, we rely on the thousands of satellites orbiting the earth in our modern lives.  This application can help us more clearly understand their place above our world.

Behind the scenes: How we built SatelliteXplorer.

The core technology behind this application is ArcGIS API for JavaScript. The positions for the satellites are calculated using satellite.js, a library for calculating satellite positions based on the sgp4 model and orbital data provided by Celestrack. The orbits are precalculated and stored as a feature layer, but the live positions for individual satellites are calculated at runtime. The orbital data is updated weekly using an ArcGIS Notebook. The attributes for the satellites are part of the UCS Satellite Database. If you want to know even more about the project, the code is publicly available on GitHub.

Disclaimer: there might be satellites that are not displayed because of missing metadata in the sources mentioned above. 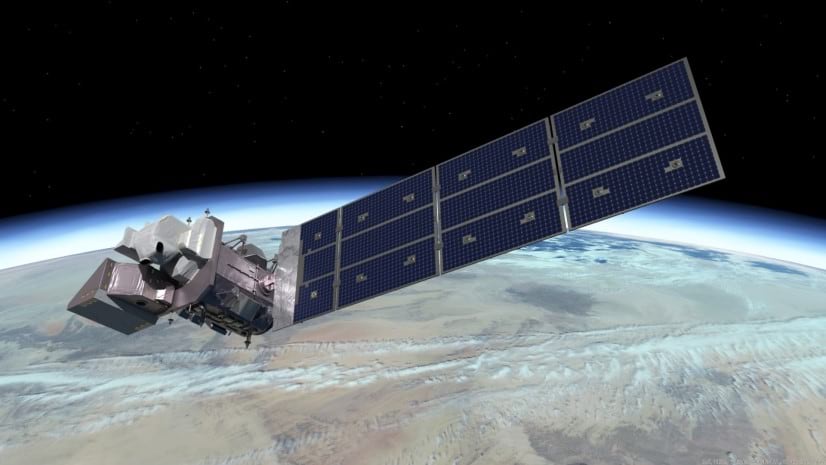