Almost 10 years of drought in Australia highlighted the need for better management of water resources, which led to the development of a National Water Initiative (NWI) that was signed in 2004. The NWI plan acknowledged the importance of managing groundwater and surface water conjunctively as a ‘whole water cycle’, including a number of areas where development of knowledge, plans, and information systems are required. To support the NWI requirements, a National Groundwater Data and Information Systems workshop was held in Melbourne in December, 2008. One of the outcomes of this workshop was the conception of a National Groundwater Information System (NGIS). The Water Division of the Australian Bureau of Meteorology (BoM) took the lead role in managing the NGIS project.

The first design of the system was done by Australian consulting companies Sinclair Knight Merz (SKM) and Continuum Consulting. The Arc Hydro Groundwater (AHGW) data model was selected as the base for the NGIS design. The AHGW design was extended where necessary to meet key NGIS functional requirements. A step-wise approach was taken in the design and implementation of the NGIS. Initially, a “core” geodatabase focusing on representing boreholes and borehole-related data was designed in detail. This core data model serves as a starting point for implementation.

The core geodatabase design focuses on representing boreholes and related vertical information such as borehole stratigraphy and well construction. The geodatabase includes a Borehole point feature class which represents the location and attributes of a bore. Vertical information (lithology, hydrostratigraphy, and well construction) are stored in tabular format, where there is a separate table for each type of vertical information. The tabular information includes attributes for storing top and bottom elevations for each segment along the bore. These can be stored as depth along the borehole or as absolute (e.g. meters above mean sea level) top and bottom elevations. In addition, the core design includes 3D line feature classes which enable visualizing the vertical information in ArcScene or ArcGlobe. The core design also includes a table for defining hydrogeologic units for the project and a polygon feature class for representing administrative boundaries of groundwater management zones. 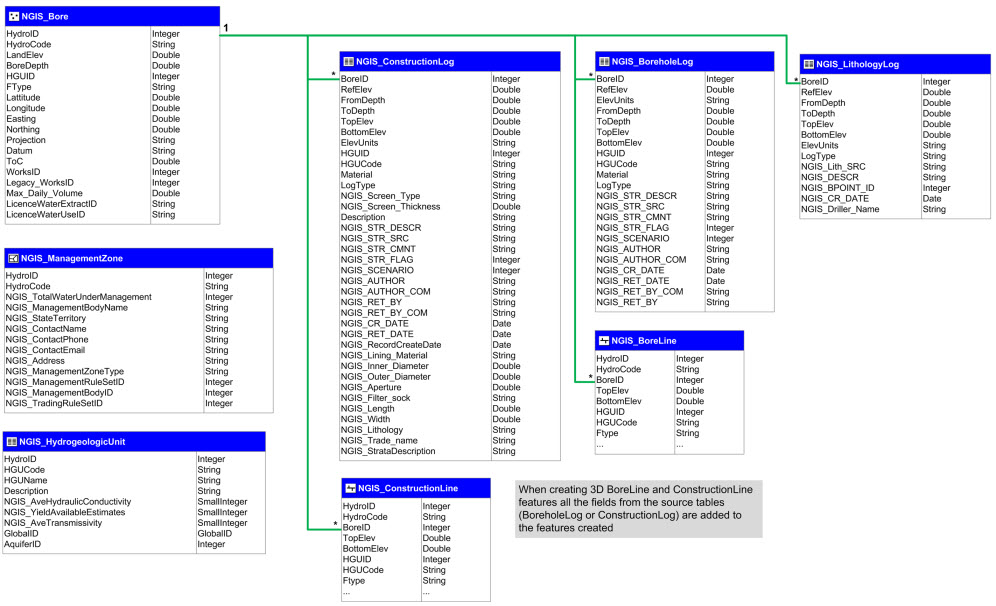 For the implementation of the data model BoM selected the Arc Hydro Groundwater toolset developed by Aquaveo, LLC. The tools enable users to:

A set of case studies were prepared for testing the core data model with local Australian datasets. The first example shows boreholes in the Musgrave prescribed wells area located in South Australia. The vertical borehole data is stored in the BoreholeLog table, and can be visualized and edited using a borehole editor available in the AHGW tools. 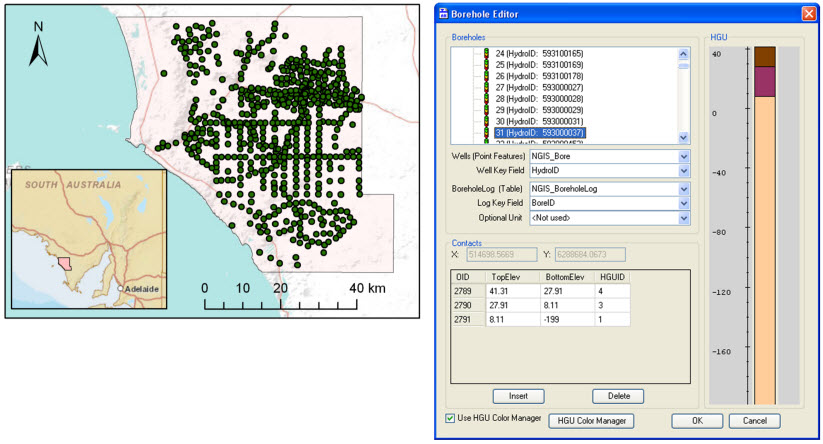 Boreholes in the Musgrave prescribed wells area. Vertical information along the bores is visualized and edited using a borehole editor available in the AHGW tools.

The vertical information can also be visualized as 3D features that are created using the Create BoreLines tool available in the AHGW toolset. The 3D features can be visualized in ArcScene as shown in the figure below. 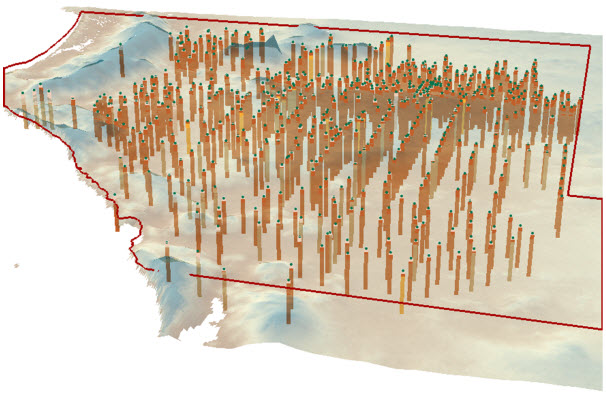 Water level and water quality data can also be related to the bores, which allows for spatially mapping the measurements. AHGW and standard ArcGIS tools are used together to build a workflow for creating water level maps. The following figure shows an example of a workflow that summarizes measurements for specified time periods, interpolates the values to create a raster, and adds the raster to a raster catalog and indexes it with a “time stamp”. Animation tools can then be applied to animate changes in water levels over time.

The examples using local datasets were also used in a set of training classes. Four 3-day training sessions were held in Sydney (luckily we did have time for sightseeing – here are some pictures in front of the famous opera house and with some local kangaroos), Melbourne, and Canberra to help BoM and the jurisdictions staff with implementing the NGIS data model and getting familiar with the AHGW tools. 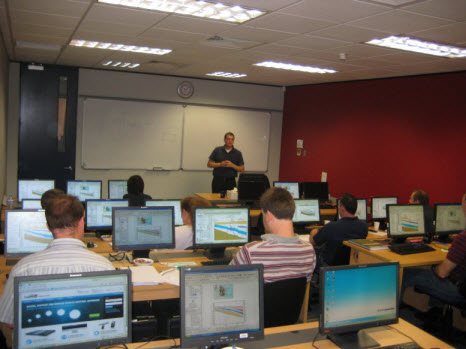 Users of the NGIS are currently implementing the core geodatabase with borehole data from the different jurisdictions. This data will then be collated to provide a continuous layer of bores and borehole information across Australia. In the next phases of the NGIS project, the core geodatabase will be expanded to include additional groundwater datasets. Hopefully, over time the NGIS will include a wide array of groundwater datasets that will support better analysis and management of groundwater resources across Australia.

A recent ArcNews article is also available for further reading.

Special thanks to Gil Strassberg for providing this post. Questions for Gil: gstrassberg@aquaveo.com