Simulation modeling helps cities understand weather events as well as its impact on people and the local economy.

After a crippling storm, Boulder, Colorado, analyzed its vulnerability to future catastrophes.

With a greater understanding of the effects of climate change, Boulder will use geodesign—data-, evaluation-, and impact-driven design—to be more resilient.

The costliest natural disaster in Boulder County, Colorado, began with a clash of meteorological titans.

In September 2013, a warm front moving in from the south slammed into a lingering cold front.

The collision opened the skies, triggering five days of torrential rains and catastrophic flooding in the state's Front Range region, from Fort Collins to Colorado Springs. More than 17 inches of rain fell over Boulder County. Nine people died, nearly two thousand homes were destroyed, and roads were washed away, cutting off access to mountain communities.

Over just 48 hours, the county received the same amount of rainfall it usually sees in a year. "We get a lot of localized flash flooding—that's normal around here," said Stacey Proctor, a project manager for Boulder County. "But this storm affected the entire county."

The storm indelibly altered the landscape of the region. In Jamestown, situated in the center of the county, cascading water from the mountains overflowed James Creek with enough force to tear in half a home situated on its banks.

In the aftermath, county officials launched a resiliency study of the area, which was completed in November 2019. "We were looking at things that we could do from the perspectives of floodplain management and public infrastructure, which for the county is mostly roads," Proctor said. "And we wanted to take into account that due to climate change, the past is not necessarily predictive of the future."

This is the conundrum. Climate change increases the likelihood of extreme weather events in some locations, but the unprecedented nature of the climate crisis also makes it difficult to predict the details of these events.

A New Framework and Tool for Modeling

Anyone who's played the game Sim City is familiar with the concept of modeling urban and regional development. Reflected in practice as geodesign, it provides a framework for testing alternatives, understanding their impacts, and visualizing their outcomes. This framework, coupled with City Simulator, an analytics software platform developed by the multinational engineering and design consultancy (and SNC-Lavalin Group member) Atkins using Esri technology, takes the concept to a new level. Modeling projected flooding in City Simulator creates output in both projected numbers of disrupted trips and a map of where those trips are likely to be disrupted. This image is a static output from the model that can be seen in motion in the video below.

City Simulator was designed primarily to help local governments understand the likely effects of climate change on their regions. The program considers factors both natural, such as a city's elevation or weather patterns, and social, such as zoning requirements and population trends. An analysis might focus on specific climate change outcomes, including heat waves or droughts. For Boulder County, City Simulator provides a way to understand future storms.

The City Simulator pulls data from a geographic information system (GIS), allowing the scenarios to play out in time-lapsed fashion on digital maps.

"In City Simulator, when the storm hits, you actually see all the buildings that get flooded and all the culverts and bridges that get overwhelmed by flooding," said the platform's developer, Stephen Bourne, Atkins' project director. "We did that very deliberately because we think that if a community can see those things, they become a lot more visceral, which moves the needle in terms of taking action."

Spatial modeling software now reflects the age of the digital twin—a concept of digitally mirroring dynamic real-world systems—that first appeared in manufacturing. Sensors could monitor and computers could model the functioning of factories at a granular level. Building on that idea, City Simulator is designed to provide a detailed and holistic view.

"Traditional engineering and science models focus on one discipline, like flood modeling or epidemic modeling," Bourne said. "Our idea was to try to push aside all the disciplines and just try to generate a digital twin with everything in it. Then we can measure anything we want—from wait times for buses to the depth of flooding—because we're modeling everything in the GIS environment." The canyon origins of Boulder County's waterways leave little room for stormwater relief upstream of the county's towns and cities.

Since Boulder County's resiliency study concerned flooding and infrastructure, Bourne's team made rainfall the focus of the simulation, which imagined how Boulder County might look in 2050. The team drove the simulation with a range of future rainfall projections derived from global climate model results. Developed by research centers around the world, these models run greenhouse gas control scenarios set by the United Nations Intergovernmental Panel on Climate Change. Projections factor a range of responses, from a world that seeks to limit greenhouse gas emissions to one where greenhouse gas emissions continue on the current upward trajectory.

Among the findings for Boulder County, the data suggested that more 2013-level floods in the Front Range were possible in the coming decades and that even infrastructure originally constructed to withstand once-per-century weather events may need upgrades.

"I think people have been surprised at how many things that have been built to a hundred-year flood level, like bridges, the model shows being flooded," Proctor said. "The question becomes, should we build above 100 years? Because that's not necessarily something we'd do on our own. That's where engineering guidelines may need to catch up to climate change."

As Bourne sees it, modeling and visualization make these questions easier to confront, if not answer. "If we provide the kind of information that moves the needle," he said, "we have the power to take action."

Learn more about how GIS helps governments and businesses analyze weather data to model the impact of and adapt to climate change. In response to the COVID-19 crisis, City Simulator keeps tabs on rising cases and their impacts.

From Climate Change to COVID-19

Although the original impetus for creating Atkins' City Simulator was to give governments a tool to understand the effects of climate change, the software is flexible enough to consider other calamities. That includes the epidemiological crisis currently gripping the planet.

"Atkins has a long heritage of flood modeling, which is why we started there," said Bourne "But we've always planned to move on to include other things on our disaster road map, including landslides, wildfires, earthquakes, and pandemics. COVID-19 has pushed pandemics to the front of the line."

At the root, City Simulator simulates residents. To better model how disasters affect lives, the program considers an area's population size and dispersal. Each person is an individual dynamic agent within the program.

This emphasis on movement allowed Bourne's team to model the cumulative effects of disasters. Flooding, for instance, damages roads—yielding direct economic costs—but also makes it difficult for people to commute to work on those roads.

"Our model looks at remoteness. For people in the mountains, if their road is out, they're not going to work that day. Whereas if you're in the urban environment, you can find another path, and maybe you're a half-hour late. We model all of that," Bourne said.

Movement implies contact, so it's no stretch to imagine how human interactions can spread an infectious disease—or how various mitigation strategies can help limit the spread. Bourne's team adapted the Susceptible-Infected-Recovered (SIR) model—used by the World Health Organization and Centers for Disease Control and Prevention—which divides populations into susceptible, infected, and recovered communities. Key to the model is an understanding of how an individual's SIR categorization changes over time, a dynamism City Simulator emulates.

"We were able to build a prototype of that in two weeks," Bourne said. "We're finding that because we chose to simulate the most basic activities first - like human interaction - the subjects we can model are boundless." 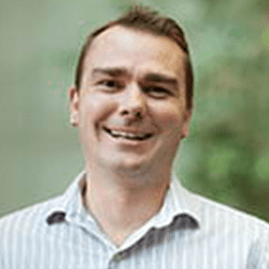 Dr. Perkl is Esri's green infrastructure lead, the ArcGIS GeoPlanner product manager, the industry practice lead for geodesign, and a principal consultant in the Professional Services Division. He provides thought leadership throughout Esri and manages a wide portfolio of environmentally focused consulting projects.