• By leveraging geospatial technology, Bartsch created a shared, up-to-date atlas of all underground utility lines at UCSB, and he hopes to include indoor assets in the future.

Ever-expanding university campuses increasingly resemble small cities, complete with miles of largely unseen snaking pipes, wires, and roads to keep them humming. One institution that inherited much of its 1950s-era underground utility lines from its former life as a military base needed a better system of cataloging what lies beneath the campus and noting upgrades as they were made.

Beginning in the early 2000s, UCSB staff collaborated with consultants to scan and index over 40,000 drawings including metadata such as the assigned UCSB drawing number, project title, date, and sheet number. Around the same time, the previously hand-drawn utility atlas sheets were digitized and inputted into a computer-aided design (CAD) file system. It would be the beginning of a yearslong effort to make utility operations at the university more efficient.

"GIS lets us ask questions of our data now," said Bartsch. "We can determine whether we have the capacity to add another building on campus, whether we need a new utility line, or find the most efficient way to spend money so we can prioritize limited funds."

Bartsch's priority was ensuring that all available utility line information was accessible to staff working on service lines and completing work requests with the most accurate data. Knowing that many staff previously worked with static maps and record drawings, Bartsch first created a resource in which they could access static files and scanned drawings. Static maps are still available and updated regularly using Esri software. The UCSB Record Drawing Search enables staff to view the original drawing files associated with a specific utility. Additional information about the year a utility was installed, the size, the materials used, as well as the original source drawings, are available and maintained in the university's GIS.

"There's so much information on the drawings it would nearly be impossible to add all that information as attributes of the lines," said Bartsch. "By linking those drawings to the utility line information, it is a simple way to have all that data in our GIS without inputting it directly and increases confidence in our data integrity."

Bartsch's next step involved using ArcGIS Pro, a GIS desktop application providing professional mapping, advanced analytics, and data management, to build UCSB's comprehensive utility atlas. Separated into more than 200 grids, each containing downloadable PDFs including aerial imagery, a full-color map sheet, and line work, the atlas brought everything that is underground into a visible, accessible digital resource that could be updated once as-built drawings were provided. The more than 600 sheets making up UCSB's underground utility atlas are easily updated each month using a combination of map series pages, Python scripting, and hosted file sharing. 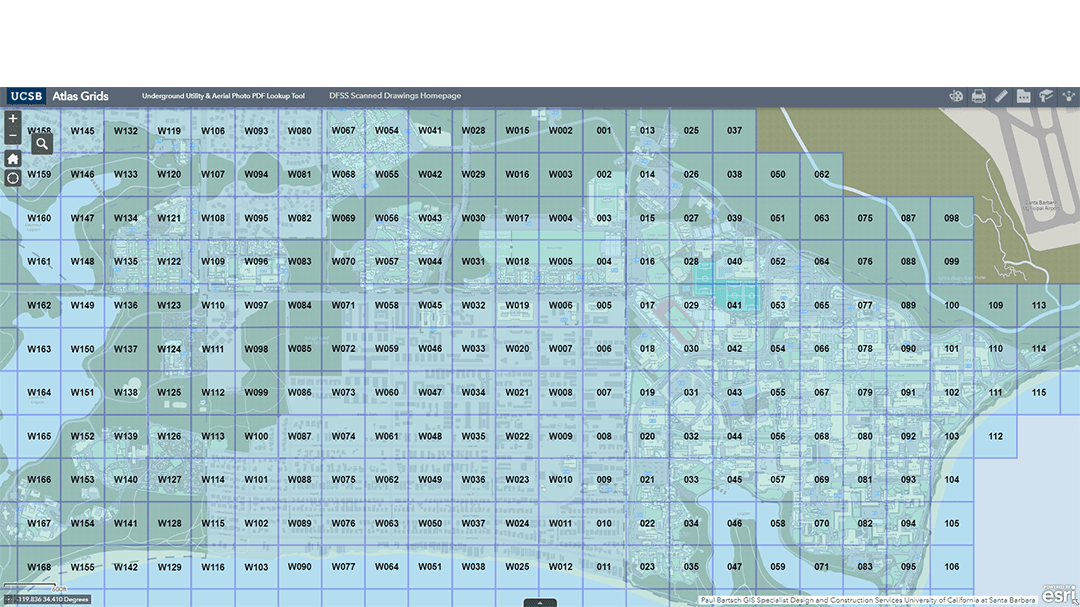 "The challenge of paper-based systems is that as soon as a project comes along, the information on that paper is outdated because it might be replaced or modified," said Bartsch. "With a GIS atlas, we now have a living view of what is actually in the ground, so it's an ongoing, updated model."

It's also preserved institutional memory in a single, shareable resource and simplified employee onboarding to practically two steps: getting an iPad or tablet and logging in. The atlas has also helped administrators see where upgrades are anticipated and where resources should be dedicated.

To keep the atlas updated as work is being done, utility technicians and crews now carry tablets and use ArcGIS Field Maps—an all-in-one app that uses data-driven maps to help with data collection and editing. For example, if a plumber notices that a storm drain has been mistakenly given a sewer lid, they can make a note of it at that moment, updating the system and requesting a lid replacement. Or if a water valve needs to be replaced, instead of creating a new drawing to account for the update, technicians can note the replacement in Field Maps or add an image. 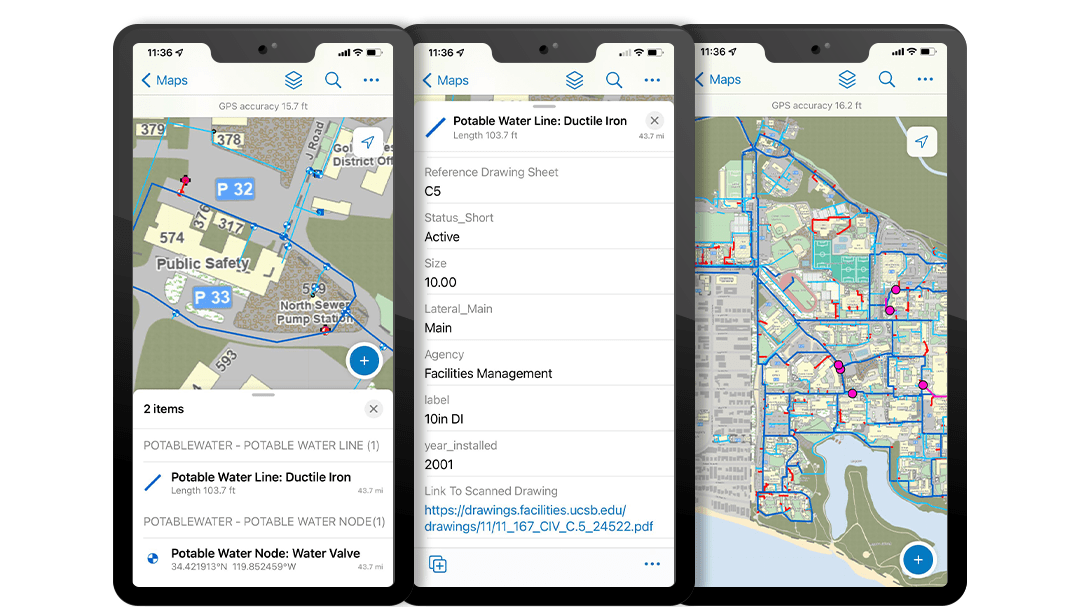 Bartsch wants to expand the geodatabase and the lessons he learned from building the utility atlas to create an indoor asset management resource, too.

"There is so much more you can do with GIS, and it doesn't all need to be done in one project," he said. "Many of our HVAC [heating, ventilation, and air conditioning] systems are still static snapshots in time. There are use cases for applying this same type of model that we are doing outdoors and underground, inside."

Bartsch also believes his utility atlas can benefit other areas of a university campus including access to a basemap of the university. He has also stored geotechnical reports data in the system, helping other departments in various project planning stages. 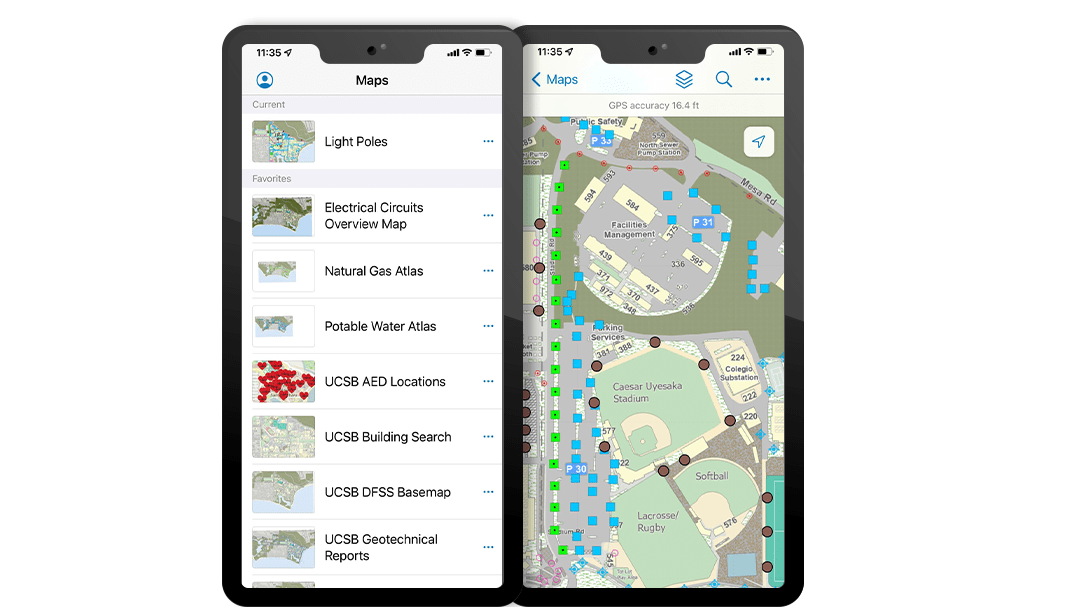 Various maps for different utilities or data captures can be accessed with ArcGIS Field Maps. Here is data recently collected by an electrician and GIS programmer Paul Bartsch from the campus's light poles for a light pollution reduction project.

"I have learned, over the years, that every single piece of collected data lives on and has more than one use," said Bartsch. "A lot of our geodatabase is customized, but I have made a concentrated effort to make things interchangeable. We store everything collected."

For Bartsch, the future possibilities of GIS at UCSB are endless, and he believes the model he created can be replicated and tailored to benefit other universities. "We now have the ability to evolve a 'living model' on campus by tying multiple data types together. We no longer have just a snapshot in time."

GIS lets us ask questions of our data now. We can determine whether we have the capacity to add another building on campus, whether we need a new utility line, or find the most efficient way to spend money so we can prioritize limited funds.