A Wisconsin county devised a system to improve the quality of its recycling program using GIS for identifying and educating citizens who contributed unacceptable items.

The Land Resources division of the Department of Parks and Land Use at Waukesha County, Wisconsin, oversees a multijurisdictional recycling program that includes 27 municipalities within its borders. For several years, Waukesha County owned a material recovery facility (MRF) that sorted collected materials and then marketed them to various mills to be used for new products.

The county facility was reaching the end of its life as was a similar facility operated by the City of Milwaukee. After extensive studies, it became clear that Waukesha County and the City of Milwaukee should coinvest in a jointly funded MRF. Under a collaborative agreement, the single-stream facility for processing fully commingled recyclables began operating in March 2015.

After single-stream bins and educational materials were distributed to county residents, haulers resumed collection operations using automated collection vehicles. The single-stream program has been highly successful. Every year, it keeps 30,000 tons of material out of landfills by processing it for recycling.

However, it is not a perfect system. Nonrecyclable or contaminated items are undesirable and expensive to process or re-sort. Inbound material contamination has been on the rise.
At the same time, allowable contamination percentages in outbound material have, in some cases, fallen to as low as 0.5 percent. Soft demand for recycled raw materials allows buyers to more closely scrutinize material for contaminants. Materials turned away by buyers result in lost income for the county. It also diminishes the county’s credibility as a quality source of recycled material even as it competes in an already tight market space.

Unacceptable materials residents place in recycling bins are the source of contamination. Plastic bags, hoses, and propane tanks are just a few examples of these materials. Noncompliant materials, such as bowling balls, automotive brake rotors, and even deer carcasses, have come through the sorting line at the MRF. In addition to the cost of properly disposing of these items, they can potentially damage expensive sorting and compacting equipment and cause bottlenecks in processing as repairs are conducted.

Waukesha County implemented an educational program called Recycle Right, focused on public outreach and education. Its goal is encouraging recycling, but perhaps as important is educating residents so they know which items are acceptable and which are not.

In addition to social media blasts, postcards and flyers were sent to residents with clarification on proper recycling practices. Truck drivers were instructed to use reminder tags on offending carts. Drivers were reluctant to do this because the process was time-consuming and put drivers at risk when exiting vehicles.

To further improve the purity of recycled materials received, Analiese Smith, recycling and solid waste supervisor for Waukesha County, turned to the Land Information Systems (LIS) division for assistance in locating, identifying, notifying, and educating residents who placed nonconforming items in recycling bins. Smith had seen GIS used for other applications at the county and thought it might be a good fit for the Recycle Right initiative.

At an initial assessment meeting, Smith described the situation. She explained that some trucks allowed the drivers to see materials as they tip it. Other trucks are equipped with remote cameras that point toward the receiving bin of the vehicle, which allows drivers to see obvious contaminants and nonconforming items.

Once the LIS staff members had a clear understanding of these logistical parameters, they inquired whether drivers would have access to portable tablets for data capture. One of the two hauling contractors already had tablets in its trucks for other purposes. The other hauler agreed to purchase tablets if needed to help increase compliance.

At the 2019 Esri User Conference (Esri UC), the LIS staff heard about a new product called ArcGIS QuickCapture and thought it might be useful for the project. The QuickCapture interface is simple. Large, single-function buttons are used for on-the-move data collection. Chris Dickerson, an LIS analyst, was tasked with designing the application and its related data model. The data structure was kept simple. Initially, a single point feature could have three core subtypes: (1) visible contaminants, (2) bagged materials, and (3) visible contaminants and bagged materials. A fourth subtype, compliant, was included so drivers could note locations of known offenders who had cleaned up their bins.
After the application was designed, the LIS and Land Resources/Recycling staff did some localized testing for a few weeks to see if the locational accuracy was good enough using phone and tablet GPS technology. Testing revealed that QuickCapture performed well, and point locations were deemed accurate enough for the purposes of the application.

With some test data to work with, Dickerson wrote a script in Python that takes the x,y point feature and, using the Near geoprocessing function, finds the nearest parcel polygon. Once a selection set is complete, the script joins the parcel polygon with the resident address point, using the tax key number as the common field.

Next, the script exports the joined tables into a Microsoft Excel spreadsheet that is emailed to the recycling staff. Using the spreadsheet and mail merge in Excel, recycling staff members create the mailing labels for postcards that gently remind offending residents of recycling guidelines.

A Dashboard Brings It Together

In September, a pilot project lasting over a month was undertaken. A single truck in the hauler fleet collected the location points for offenders, and the card notification process was initiated and tested. Anticipating that the full implementation of this plan would generate a large, dynamic dataset, LIS supervisor Jim Landwehr requested that Dickerson to put together a Recycle Right Operations Dashboard.

Dale Shaver, director of Parks and Land Use, is a big proponent of data tracking, quantification, and visualization as part of his ongoing initiatives to better serve the citizens of Waukesha County. Operations Dashboard for ArcGIS provides an executive-level look at data distribution and transaction-level trends in real time using interactive graphs, charts, and heat maps.

Within a few days, Dickerson assembled an intuitive and informative dashboard for the recycling staff’s review. Staff members were excited by the easy-to-use dashboard that gave them a deep-dive lens into their data. The graphs, charts, and maps in the dashboard are linked, so clicking on one component changes the data in the other panels dynamically to make the data easily discernible to users.

Another advantage of the dashboard is that it can be used to brief supervisors, managers, and elected officials on the progress of the initiative. It provides tangible numbers for reports and can even be used to educate the public on problem areas and contaminant trends over time.

With a successful pilot project, the Land Resources/Recycling division is preparing to equip every truck in the contractor fleets with the QuickCapture app. The division is preparing to deal with the projected increase in contaminant locations and the efforts required to mail reminder cards to residents at those locations. While a 30 percent decrease in contaminant material is an aggressive goal, the division hopes that significant progress can be achieved through the educational and awareness focuses of the Recycle Right program. Using GIS to help zero in on offending areas is just one small part of a broader initiative toward a greener county and a better planet.

Jim Landwehr has more than 30 years of experience in the GIS and AM/FM mapping industry in both the public and private sectors and is GISP certified. He has been working with Esri software for over 20 years and is proud of his division’s accomplishments, which include two Esri Special Achievement in GIS (SAG) Awards in 2004 and 2018. Landwehr earned a bachelor’s degree in geography/anthropology from the University of Minnesota. He also enjoys writing and has published two memoirs and five books of poetry. 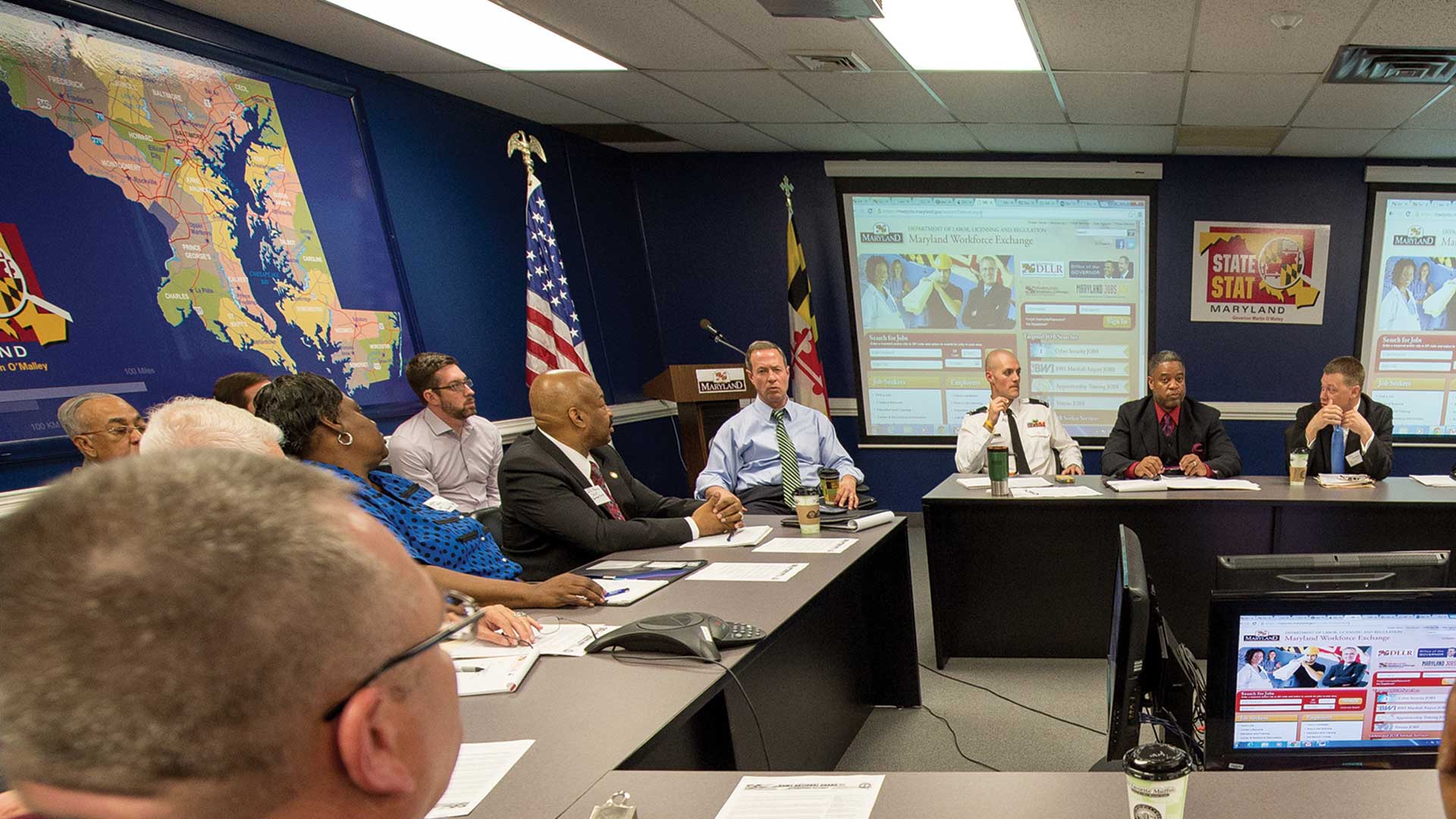 Map It. Believe It. See It.

The Modern Role of GIS in Today’s Planning Department