With a population of nearly one million, Austin, Texas, was ranked third in POLICOM’s 2020 economic strength rankings for metropolitan areas in the United States. Often referred to as Austin’s second downtown, The Domain contains office, retail, and residential properties occupying 303 acres in the northwest section of the city.

Commercial tenants include Amazon and Facebook, and shoppers can visit Louis Vuitton, Tiffany & Co., and other retail establishments.

The Domain’s location was originally developed by IBM as a campus for its administration and manufacturing operations but was sold in the 1990s. The initial phase of The Domain project was completed in 2007. Stonelake Capital Partners, one of the four companies that own and operate The Domain, is now redeveloping an existing 33-acre site and constructing eight high-rise commercial and residential buildings.

After a building has been designed, it must be visualized so that the architectural designers and project investors can evaluate the design prior to construction. This can be done in various ways.

Scaled design models of buildings, provided in various 3D file formats, can be created and distributed for review. These highly detailed models can be easily viewed in design programs but lack locational context for the proposed construction.

In the past, positioning large-scale renderings was a method used at The Domain. Those involved in the construction or financing of the project drove around the site to get a firsthand view of how the proposed development would look in relation to existing buildings and the site.

However, models and renderings don’t provide much more than a static view of the proposed construction. Another disadvantage of using either mock-ups or large illustrations is that the construction site must be physically visited. This can be inconvenient because it may require traveling long distances to the site and depend on favorable weather.

Pape-Dawson Engineers, a Texas firm that uses GIS, was selected for the civil development of the property. The firm solicited building designs from a number of architectural firms. Daniel Chantlos, who was a GIS analyst at Pape-Dawson Engineers prior to his position as a solution engineer for architecture, engineering, and construction (AEC) at Esri, worked on The Domain project.

“Since the proposed project and existing development around it are very complex, standard renderings and presentation boards were not the appropriate tool to allow the audience to properly visualize the new redevelopment plan,” said Chantlos. “In addition, the number of renderings that would have been required to adequately depict the project would have been unmanageable and even increase the total cost of the project.”

Instead, he saw a way to skip the physical rendering stage by creating a dynamic, three-dimensional virtual reality tour of the properties to be constructed at The Domain using ArcGIS. Chantlos used ArcGIS CityEngine, advanced 3D design software; ArcGIS Online; and the ArcGIS 360 VR app with an Oculus Go headset.

Creating the tour required several steps. From the architectural firms, Chantlos received models of each proposed building in a 3D file format. From the commercial land development team at Pape-Dawson Engineers, he obtained street network data in CAD format.

After importing the building and street networks data into ArcGIS CityEngine, the streets were autogenerated. Chantlos added trees, streetlights, people, and cars to make it look like a cityscape. Still in CityEngine, he extracted aerial imagery of the construction site from the Esri World Imagery dataset to import footprints of the existing buildings and determine where the new buildings will be constructed.

The final design was exported as a 360 VR Experience (3VR file) from CityEngine and shared on ArcGIS Online. Chantlos accessed the 3VR file on an Oculus Go headset using the ArcGIS 360 VR app to view the completed virtual reality scene.

“The architects used a variety of 3D software in their design work for this project, which included Revit, InfraWorks, and SketchUp, so it was beneficial that CityEngine can import a number of different 3D file formats,” said Chantlos. Because different 3D software was used to create the building designs, each file had to be manipulated in some way in CityEngine by manually rescaling each model proportionally. Often 3D designs do not contain coordinate system information, so he had to manually place each 3D building in its proper location on the construction site.

Because this was the first time Chantlos had created a fully immersive virtual reality experience, he had to learn how to use CityEngine. It was a rewarding experience for Chantlos, who said, “All parties were very happy with the final result.”

The planned redevelopment project was easily viewed as a virtual reality scene by the potential investors from locations throughout the United States with their Oculus Go headsets. Because the investors didn’t have to travel to the actual construction site in Austin, Texas, Pape-Dawson Engineers was able to speed up the decision-making process. This immersive experience was also used as a tool for preleasing one of the proposed buildings. 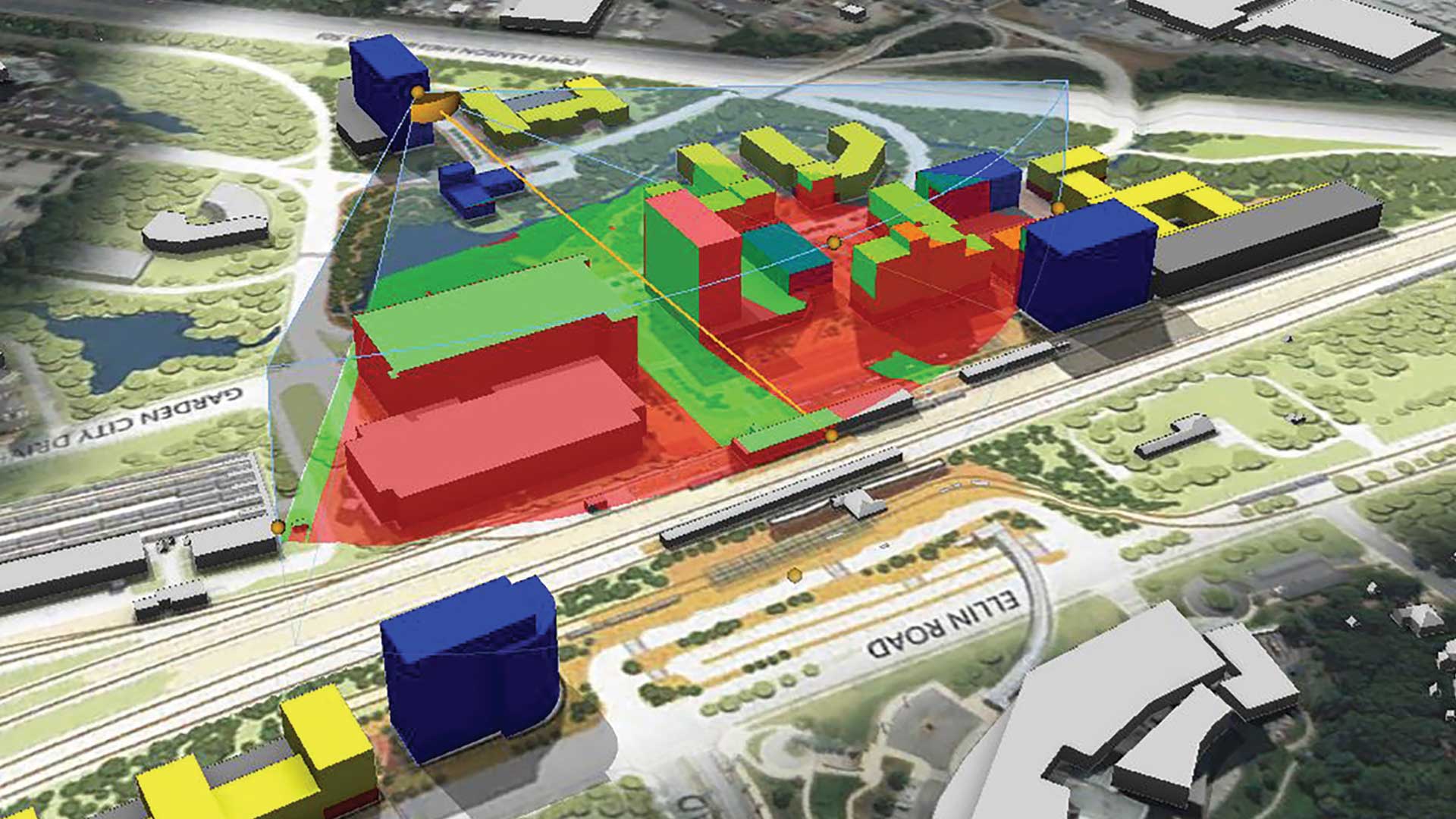 Connecting the Built and Natural Environments with 3D GIS

Seeing the Once and Future Alamo in 3D

Engineers restoring the original site of the battle of the Alamo are using 3D GIS visualization of historic site.

Planning the City of Tomorrow in 3D

The Internet has provided a connected, digital environment that allows much of the world’s population to enjoy the benefits of exchanging a wide

Many Possibilities for Policy Maps from Living Atlas Data