If you’re looking for a tool you can use immediately to count overlapping polygons, you can download the Count Overlapping Polygons tool.  You can also download the sample data and model used in this post here.

The Deepwater Horizon oil spill in the Gulf of Mexico lasted from April 20 to July 15, 2010. During this time, NOAA mapped the extent of the plume daily and distributed it in various GIS formats. The map below uses this data to show the plume concentration over 67 days. The count value in the legend is the number of days the plume covered an area. Since there is one polygon per day, count is simply the number of overlapping plume polygons. 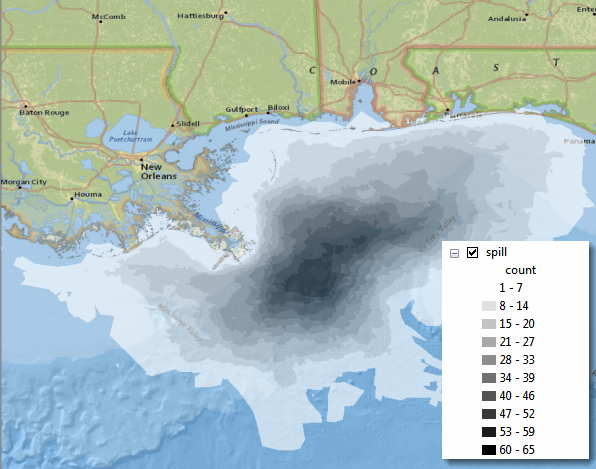 Figure 1: Number of days that the plume covered an area 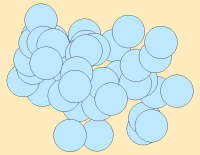 To illustrate the details of this technique, I’ll use the dataset shown in Figure 2, one I created by buffering a bunch of point features.

The output of Feature To Polygon is shown on the right side of Figure 4. The left side is the original overlapping polygons and I’ve highlighted two void areas that are made into polygons by Feature To Polygon. I call these ‘artifact’ polygons. I note these because such artifact polygons require a bit of special handling later.

The next step is to create a centroid point for each polygon in the output of Feature To Polygon. These centroids are the ‘meatballs’ of the spaghetti and meatballs technique. We’re going to use these points in an overlay of the original overlapping polygons to produce a count.
To create the meatballs, use the Feature To Point tool, illustrated in Figure 5.  Be sure to check the Inside option—this guarantees that the point created will be inside the polygon. 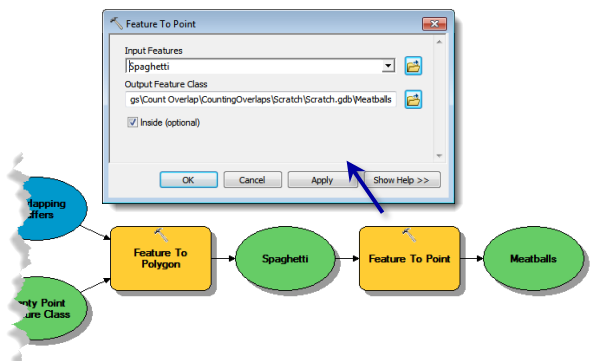 Figure 6: Meatballs and their attributes

Now comes the interesting part—we overlay these meatball centroids with the original overlapping polygons to get a count of how many polygons overlap each meatball point. There are several ways we can do this. For example, the Intersect  tool could be used to create a new point feature class containing one point for each polygon that overlaps it. The next step would be to count up the number of occurrences of ORIG_FID using the Summary Statistics  tool. But this is a lot of steps to go through just to get the count.

I’ve found the fastest way is to use the Spatial Join tool. Figure 7 shows the model and dialog.

Figure 7: Overlaying the centroids (meatballs) with the overlapping polygons

Figure 8 shows the attribute table of the result of Spatial Join – a copy of the meatball point feature class with a Join_Countfield, which is the number of polygons that overlap the point.

A couple of things to note about the Spatial Join parameters:

Now all we need to do is to copy the Join_Count field back to the spaghetti polygons. I use the Join Field tool for this, illustrated below. 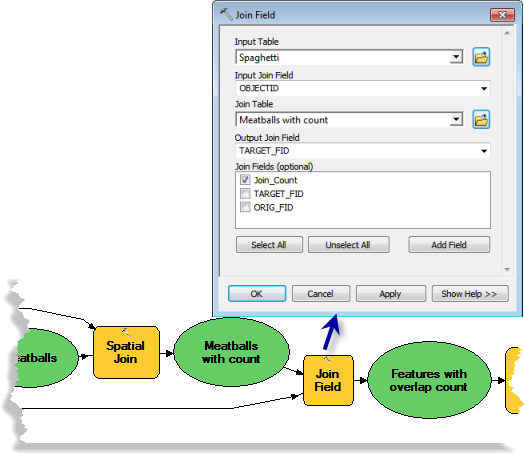 The final step is to delete the artifact polygons described above. All we need to do is select those polygons with a Join_Count equal to zero and delete them. Here’s the last piece of the model that does this:

In the Make Feature Layer tool, the Expression parameter value is “Join_Count” = 0. This creates a layer with the two artifact polygons selected. Delete Features  is executed on this layer to delete these two polygons. (When the Delete Features tool is executed in the above model, it will always issue WARNING 000117: Warning empty output generated which you can ignore.) 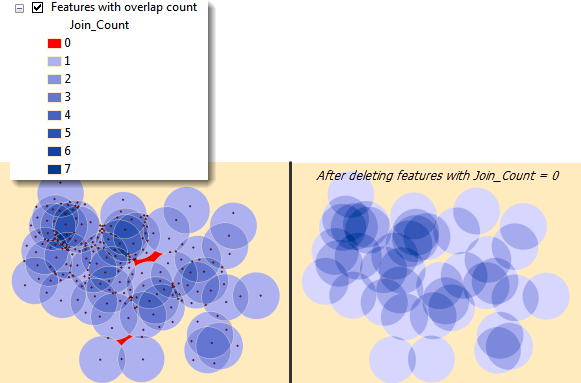 Let’s go back to the original 67 oil spill polygons for a moment. Running Feature To Polygon on these 67 overlapping polygons results in 18,733 unique polygons with a maximum Join_Count of 65. To count overlaps on these 18,733 polygons using the spaghetti and meatballs method takes about 65 seconds on my laptop. Using 64bit background processing, it takes 44 seconds.

Overlapping polygons in a single feature class is not uncommon. By creating spaghetti with the Features To Polygon tool, you can resolve the overlaps and begin further analysis. The technique of creating meatballs (centroids) of the spaghetti gives you a point feature class that can be used in overlays to discover other properties, such number of overlaps as was done with the oil spill data above. In a future post, I’ll show how you can use this technique to resolve one-to-many problems that occur frequently in ecology data, where geographic extent (the range) of an individual species is captured as a single polygon, and the task is to find overlapping ranges and the species within.

A final note: this spaghetti and meatballs technique is not a substitute for standard overlay tools such as Intersect, Identity, and Union. Spaghetti and meatballs is only for data that has the exact same attribute schema—that is, you have a single feature class with overlapping polygons. If you have two or more feature classes, such as one of soil data and another of slope data, you’ll want to use the standard overlay tools.

Read the next blog in this series: spaghetti, meatballs, and the one-to-many problem