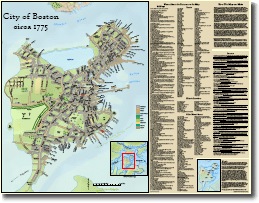 This post, is to announce the release of a map template for historical GIS called Historical GIS:  Boston 1775. If you’ve never given historical GIS a second, or a first thought, you might find the contents interesting and maybe even applicable to your work. Consider that the vast majority of GIS data is historical, even if it’s only a few minutes old.

Genealogy and history have been hobbies of mine for years now, and I’ve since developed an interest in colonial U.S. history– in particular, the U.S. Revolutionary War. For me, GIS and mapping provided an obvious way to make sense of the history I found fascinating. As such, I found it more than a little ironic that relatively few of the historically-inclined geographers I’ve met had turned to GIS much less demonstrated GIS-based methods as a sound basis for scholarly historical inquiry. But, I’ve been happy enough to take that opportunity to blaze a trail.

That trail formally began over two years ago when I began to show some of my historical “work” to historians and historical geographers. I got a good reception, constructive criticism, and encouragement. In particular, I was encouraged to share what I had done with others because all too often historical GIS projects in various universities were not communicated. Included with this template is a manuscript, “The ArcGIS Citation Data Model and Method“, which details the approach used to create the Boston 1775 map.

One of the projects I undertook was to create a GIS of Boston in 1775, using only maps published from that period. I eventually included some later source material of reliable historical character to flush out locations for specific or notorious events, structures, and so on. My goal was to create an inventory and therefore as complete a picture as possible of Boston’s environs in 1775. Not only that, I wanted to be able to cite every feature, making it possible to create a map that was in essence a spatial argument for what I think was in Boston in the year 1775.

Using the database model in this template, I think it is now quite possible for anyone with the time and interest to construct a historical GIS of any city at any time. Granted, adaptations would be necessary, but I don’t think the excuses, that made historical research to this point apt to not include maps, hold any longer.

As added encouragement, publishing your work as a template will very likely improve the scholarship of your map research and content. I mostly cleaned up the database and map for this template over a year ago when I presented this work at the Boston Association of American Geographers Conference—in doing so, I found and fixed a number of my own miscues. So revisiting my map and database allowed me to improve the quality of both.