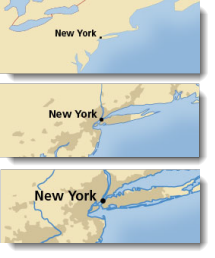 Natural Earth is a free, public domain map dataset available at 1:10, 1:50, and 1:110-million scales and includes new vector and updated raster themes. The goal is to give cartographers and GIS users an off-the-shelf solution for creating small scale world, regional, and country maps.

Tom and I are pleased to celebrate the 1 year-anniversary of the Natural Earth project by introducing a new “quick start kit” (150 mb ZIP) that includes a sampling of Natural Earth vector and raster data and an ArcMap document that compiles the themes into an easy to browse, styled map. The map comes in two flavors and scales: the world (zoom to all) and at a regional scale (zoom in to U.S. states and countries world wide) with cultural and physical data frames to switch between.

You can download individual themes (or the whole set) from naturalearthdata.com, where you’ll find raster imagery of Natural Earth I and II in perfect registration with the vector linework. Both political and physical features are included in Natural Earth data.

Natural Earth solves a problem that many map makers face: finding vector data to make publication-quality small scale maps. At a time when the web is awash in interactive maps and free, downloadable vector data, such as the Digital Chart of the World and VMAP, map makers are forced to spend time sifting through a confusing tangle of poorly attributed data. Many map makers working under tight project deadlines must use manually digitalized bases instead.

Small scale map datasets of the world do exist, but they have their problems. For example, most are crudely generalized—Chile’s fjords are a noisy mess, the Svalbard archipelago is a coalesced blob, and Hawaii has disappeared into the Pacific two million years ahead of schedule. They contain few data layers, usually only a coast and country polygons, which may not be in register.

Natural Earth fills this oft-overlooked but important niche. Since we launched the project in December 2009, we have served up 150,000 downloads and received visitors from virtually every county in the world with over 500,000 total pageviews. Natural Earth data is an ongoing collaboration involving many volunteers from around the world. Please join us! For more information contact: