Its been 5 years since ArcGIS Pro was first released in 2015.  Since its release as the premier GIS mapping and spatial analytics software available, its capabilities continue to grow.  During this initial release 3D was the eye candy and the new feature.  No longer limited by older software architecture ArcGIS Pro broke the mold and became more.  These advances brought forth a need to have advanced graphics acceleration to deliver 3d imagery, and more.  During this initial development teams from Esri and NVIDIA began working closely together to deliver ArcGIS Pro in virtual environments.

Running ArcGIS Pro requires the use of a GPU. Making the best use of a resource such as a GPU involves scalability when sharing GPU functionality. This is where the GPU profiles come into play. To achieve the best return on investment, density, or functionality, profiles are assigned to each VM. To get the best ArcGIS Pro user experience the minimum recommended frame buffer is 1024 MB (1 GB), which is shown as the 1Q profile. A 1Q or 1 GB frame buffer profile allows for the overall needed functionality. As workload demands on the GPU increase, as well as the additional needs from the operating system, additional frame buffer can be needed. Additional profiles offer more frame buffer from the GPU which can positively affect the user experience.

Geoprocessing as well can make use of the GPU. New tools continue to be introduced that can be used for GPU compute. Tools such as Slope, Aspect, Viewshed2 and others take advantage of the GPU and offset the CPU usage. The GPU can also be used for inference when configured to use TensorFlow. ArcGIS Pro user types could be broken down in three categories:

NVIDIA has produced many GPUs over the recent years. The first being the NVIDIA GRID Kepler architecture series, which was released in 2012. Since then, the Maxwell, Pascal, Volta, Turing, and the recently announced Ampere architecture.  Advancements in the Pascal architecture and later, allow for both visualization as well as high performance computing simultaneously.  This advancement allowed ArcGIS Pro to leverage the GPU for compute as well as Imagery.  NVIDIA GPUs are classified by either performance, density, or blade optimized. V100, P40, and T4 are examples which are all classified as performance optimized graphics processors.  All these GPUs are meant for performance workloads such as heavy 3D visualization, machine or deep learning, or data science projects.

The NVIDIA Tesla T4 (with Quadro vDWS) is a GPU offering from NVIDIA on the Turing architecture that has offered the most diverse use cases for virtualizing ArcGIS Pro. The T4 is a low-profile, single PCIe slot form factor GPU with 16GB memory and 70w of power consumption.  With low power consumption and a good amount of memory, the T4 is an excellent choice for delivering various workload types within ArcGIS Pro.  In addition, the size of the card offers a very large set of options that support scalability and density, as shown in other Esri/NVIDIA publications.

ArcGIS Pro continues to add new spatial analysis tools, as these new tools are developed or updated the focus of delivering faster compute times opens to using the GPU for compute in addition to using the CPU. One of the best examples of the impact of using a GPU for compute has been the use of the ViewShed2 analysis tool.  ArcGIS Pro running this tool saw a dramatic improvement in processing time.  In the example above the tool using the GPU for compute ran the analysis in less than 2 minutes versus 14 minutes.  This is an example of the amount of time saved using the GPU to assist with compute processes.  Building on that and using CUDA when processing palm trees using the Detect objects using Deep Learning, and a trained network for inference.  In other testing, detecting palm trees the compute time is dramatically faster.  Instead of 30 minutes the process completes in 6 minutes.  The advantage of the GPU here is clear, although delivering 3D is a key focus, the ability to save work hours on compute tasks is a welcome advancement.

We continue to see growth and adoption of ArcGIS Pro as utility companies, Higher Education, Gov’t agencies and private companies utilize ArcGIS Pro in virtual environments.  This continues to be enhanced to deliver 3D imagery and a fantastic user experience, enhanced with NVIDIA GPUs supporting the visual and compute analytical needs.

For additional information on the power of NVIDIA vGPU with ArcGIS Pro Check out the following blog:

Get more insights about on how to remotely access ArcGIS Pro from virtual workstations from On-Prem data centers or cloud virtualization at the GPU Technology Conference, taking place October 5-9

Esri users have heard the message that a dedicated Graphics Processing Unit or “GPU” is essential to the successful delivery of ArcGIS Pro. 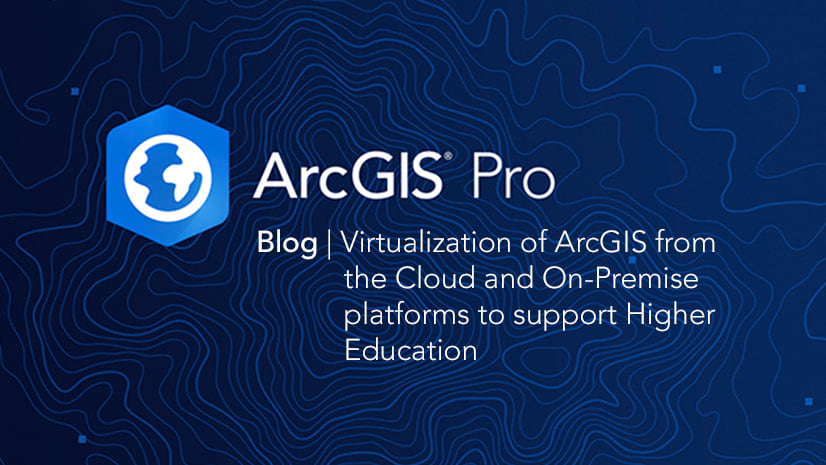