A representative fraction (RF) is the ratio of distance on the map to distance on the ground. Representative fractions are expressed in the form of 1 followed by a : (colon) and then a number, where the one is the numerator in the fraction, the colon represents the division operation, and the other number is the denominator. Thus, a scale of 1:24,000 can be expressed mathematically as 1/24,000. In fact, on some maps, you will see the RF represented using a division sign.

RFs are easy to determine and to insert in ArcMap. To find out the RF of the current map, simply look at the Map Scale drop down on the top bar menu.

The representative fraction for the map is shown along the top bar menu in ArcMap.

To insert an RF on your map, click Insert on the top bar menu, then select Scale Text. The first choice on this dialog, “Absolute Scale”, is a representative fraction (figure 3). As with scale bars, after you select this, you can change many of its properties. Once inserted, you can also double click the RF to change even more properties. 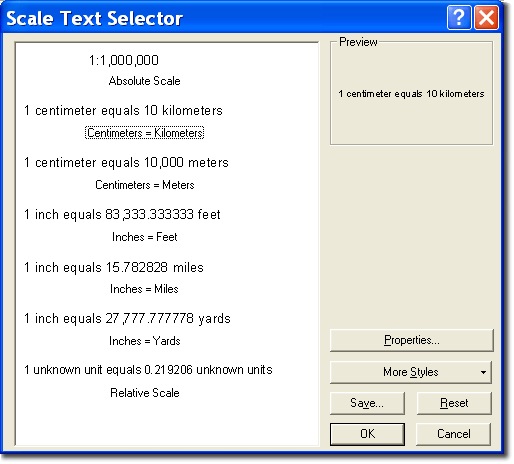 The first option in the Scale Text dialog is used to insert a representative fraction into your map.

Representative fractions allow the amount of reduction to be easily understood, but it is harder for most people to determine specific distances on the map because distances must either be multiplied or divided by the RF. Representative fractions are invalid if the map is reduced or enlarged. An advantage of adding RFs to your map is that they are extremely easy to determine in ArcMap – simply look at the Map Scale text on the to bar menu of the ArcMap interface. If you do plan to use an RF and the current scale of your map is a number that is not either standard or rounded off, you should change your map scale before creating the final version of your map so that the RF is an easier number for your map readers to understand. Sometimes it is helpful to provide a scale bar along with the RF to give your map readers the advantages of using both.

A representative fraction can be shown along with a scale bar to help map readers even more.

As with scale bars, this map element should be subtle and it should not draw the attention of the map reader – again, they should have to shift their attention in order to find it on the page. The font size used for the RF should be some of the smallest on the page.

If you use an RF with a scale bar, you should place it directly above or below the scale bar. Which you choose will be determined by the layout of your map, but usually the RF is shown above the scale bar. Oftentimes the text for the RF will use the same font as the text and labels for the scale bar – this keeps both at the same visual plane and it relates them visually for the map reader.

These scale indicators are often used on smaller scale maps and they will also appear along with other scale indicators (verbal scales or more often scale bars) on larger scale maps. Many maps, including the USGS topographic map series, are primarily known by their representative fraction e.g., 1:24,000 scale quadrangle maps.

Look for a blog entry on verbal scales from me next!

The third most common way to indicate scale on a map is though the use of a verbal scale – these are less common than representative fractions (RFs) but they are usually more intuitive!