First, as the mayor of Baltimore, Maryland, from 1999 to 2007 and then as a two-term governor of Maryland, Martin O’Malley was known as a leader who demanded accountability and measured results. He introduced data-driven government reporting and management programs such as CitiStat, StateStat, and BayStat.

In his new book from Esri Press, Smarter Government: How to Govern for Results in the Information Age, O’Malley shares stories that illustrate the mind-set and strategies that made his tenure in public office so successful. As he notes in the introduction, “This book is not so much a user’s manual for Stat or GIS but rather a practitioner’s guide for collaborative leadership in the Information Age.”

In the Information Age, O’Malley believes the public’s expectations of openness and transparency in government have increased because the gap between what leaders know and what the people know and when they know it has virtually disappeared. Consequently, maintaining public trust is much more problematic.

To be effective, elected officials must be good at governing and managing and lead with a new emphasis on building collaboration. For this new way of leading to work well, problems must be made visible, solutions adopted, and results measured. This requires innovation in both leadership and technology.

Beyond the smooth delivery of government services, O’Malley describes a smarter way to achieve public sector progress that also includes preserving and restoring natural resources, such as air, water and land, and protecting the well-being of residents, whose education, health, and safety depend on government. How do government leaders discharge this responsibility? “We do this by setting clear goals, measuring progress, and getting things done,” says O’Malley. Esri, 2019, 332 pp., ISBN: 9781589485242.

Connections and Content: Reflections on Networks and the History of Cartography

Cartographer and author Mark Monmonier, who is best known for his book How to Lie with Maps, shares his insights about the relationships between networks and maps in this collection of essays. The unifying thread that runs through the book is that behind every great map is a network and behind every great network is a map.

Monmonier is a distinguished professor of geography at Syracuse University’s Maxwell School of Citizenship and Public Affairs and the author of 20 books. He was the editor of Cartography in the Twentieth Century, an encyclopedia published as volume six in the History of Cartography series. His awards include the American Geographical Society’s O. M. Miller Medal (2001), the German Cartographic Society’s Mercator Medal (2009), and induction into URISA’s (Urban and Regional Information Systems Association) GIS Hall of Fame (2016). Esri Press, 2019, 290 pp., ISBN: 9781589485594. 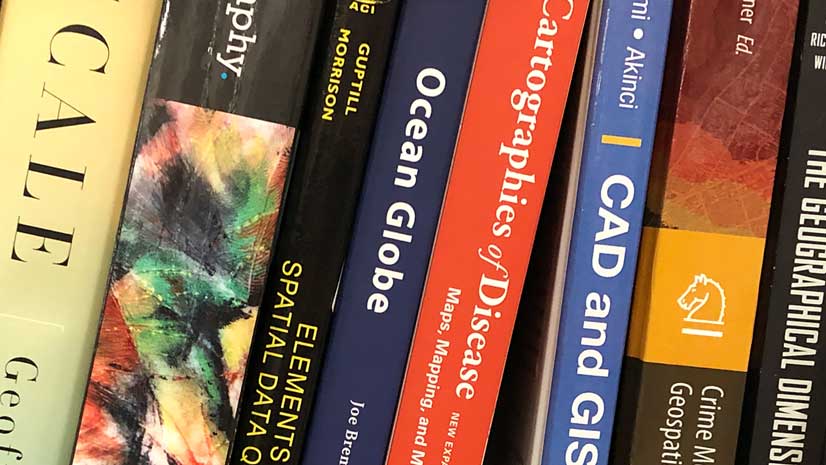 GIS for Science: Applying Mapping and Spatial Analytics and GIS and the 2020 Census: Modernizing Official Statistics