One manufacturer, Western Digital, had bad news for its shareholders. The floods caused a major disruption in their hard drive production which would cause revenue to fall 60% year on year for its winter quarter, 2011-2012. Western Digital marshaled its forces and production recovered astonishingly quickly after the flood, but not before Western Digital spent hundreds of millions of dollars on recovery.

Like many GIS professionals I read about this flood event and wondered to myself, why were they not anticipating that these floods may occur? How could they have kept all their eggs out of the same basket?

It seems many companies made the same mistake, otherwise Western Digital might have risked losing market share in addition to revenue.

How can The Science of Where help companies site critical facilities where risk from flood hazard is minimal?

In the United States, the ArcGIS Living Atlas of the World has two map layers available which can help businesses estimate the vulnerability of sites to flooding.

The best known of these is the layer from FEMA called the National Flood Hazard Layer. In the ArcGIS Living Atlas of the World, it’s known as the USA Flood Hazard Areas layer. Its purpose is to delineate where the Federal Government requires mortgage holders to insure their property against damaging floods. Analysts have long used this layer off-label for planning.

The USA Flood Hazard Areas layer is created with flood insurance in mind. FEMA flood zones show where flood insurance is required under federal law. Inside the line, FEMA estimates a 1% annual chance of flooding which could risk lives and damage property. In some cases, although not many, FEMA indicates where they estimate a 0.2% annual chance of flooding.

Western Digital’s facilities were inundated in what was called a once in 100 year flood event. If this flood occurred in the United States, these areas would likely appear on FEMA’s layer inside a flood zone where there is a 1 percent chance of an annual flood hazard.

The USA Flood Hazard Areas layer has a high spatial precision. Where available, the layer shows the areas where damaging flooding is possible. But there are only two risk levels, a 1% or 0.2% annual chance of damage. The layer’s temporal precision is somewhat coarse.

In addition, the USA Flood Hazard Areas layer does not yet cover the whole USA. Let’s say we’re siting a 500 million dollar manufacturing facility and have to choose between two places. The first site has a 0.2% annual chance of flooding, but we have no FEMA USA Flood Hazard Areas layer data at all about the second site, which one do you choose? Do you choose the site where we know there is a small risk, or do we choose the site with no information at all?

In these planning cases, combining USA Soils Flooding Frequency from NRCS (part of the Soil Survey of the United States) with the FEMA flood layer in a weighted overlay can help fill in where other information is missing.

ESRI updates its NRCS soil layers collection for the United States annually to the ArcGIS Living Atlas of the World. The newest update was completed last night (March 4, 2020).

Know which flood layer to use for wildlife plants, and which one to use for manufacturing plants

Why does the federal government issue two layers about flooding? The USA Soils Flooding Frequency layer is different from the national flood hazard layer (FEMA) in important ways. The NRCS Soil Survey includes flooding frequency as a soil property along with the other hundreds of soil attributes they catalog and map. The spatial resolution of USA Soils Flooding Frequency is more coarse, but its temporal resolution is more nuanced than the FEMA USA Flood Hazard Areas layer. FEMA will only tell you if you’re inside or outside a 1%,  sometimes 0.2% annual chance of flooding, while USA Soils Flooding Frequency can estimate more frequency classes, such as whether annual maximum risk of flooding is 5%, 20%, 50% and so on.

The USA Soils Flooding Frequency, just like a FEMA flood zone, is not designed to site manufacturing facilities, but it still may help in strategic planning. Its purpose is to help choose crops and describe ecological conditions. The soil’s flooding frequency attribute does not consider the property damage that may occur due to that flooding. We may think of it as flooding from an ecological perspective rather than a property damage perspective.

When you want to decide where to preserve habitat that needs flooding at regular intervals, your best bet may be the NRCS’ USA Soils Flooding Frequency layer. For siting manufacturing facilities, use FEMA’s USA Flood Hazard Areas which is more appropriate for insuring against property losses. 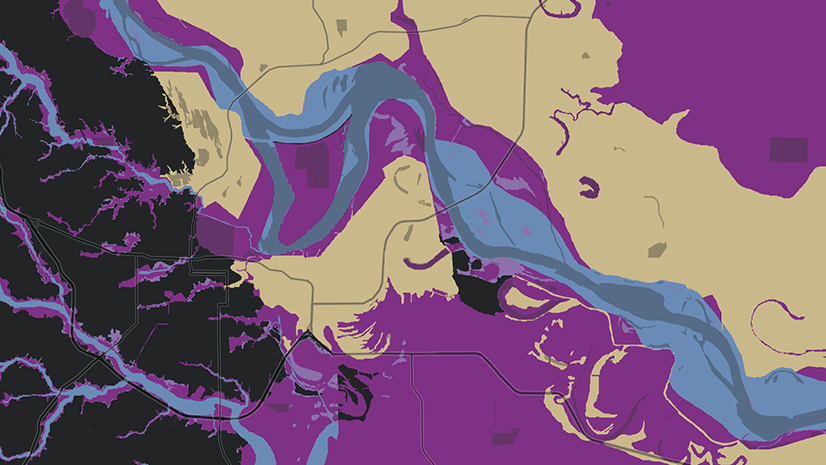 Flooded by Features? Use This Recipe for Building Complex Hosted Feature Services